Using Moss as a Design Element

Who can resist the pleasures of moss, a 10-second spa treatment, a bed of berber that caresses the sole? A stroll in the woods usually offers us this pleasure — but so could a walk in the garden. Thriving as a fixture in Japanese garden design, moss has only slowly crept West, though Norie Burnet of Richmond, Virginia, has been tending her moss garden for more than 10 years. 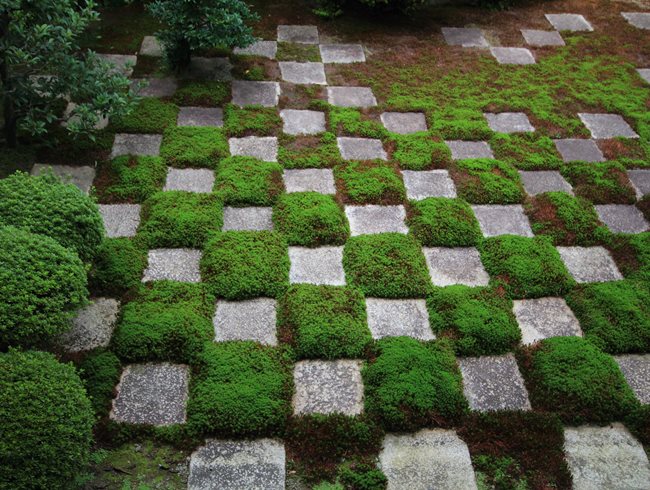 Moss grows in a checkerboard pattern in this modern zen garden. Photo by: Chim/Shutterstock.

"There are seven naturally occurring types of moss growing in my yard, among them pin cushion moss (Leucobryum glaucum), hair cap moss (Polytrichum commune) and Bryoandersonia illecebra. The mosses have created their own design over the years; my part has just been to keep the garden free of debris, one of the secrets to healthy moss," explains Norie.

Moss' subtle contrasts of height and color have the potential to attract admirers. Dave Benner, founder of moss retailer Moss Acres agrees: "When you allow mosses to grow together in one space, they make interesting patterns without any shaping or other interference. My hair-cap moss has grown almost 10 inches tall, and it looks like thousands of little trees speckling the yard. My fern moss is lighter and shorter and makes a nice contrast." 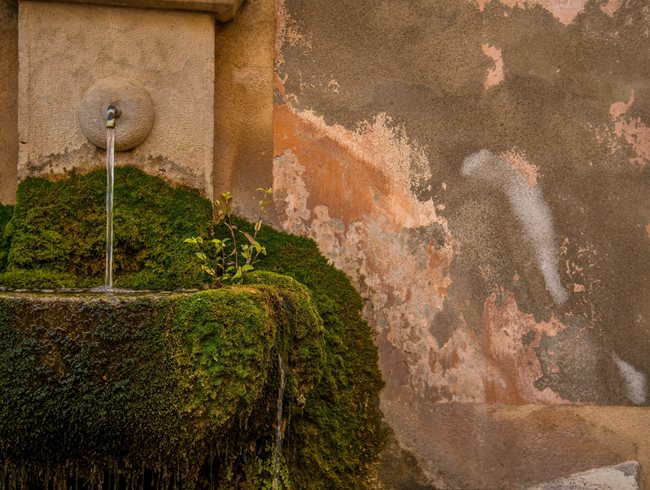 Moss, which thrives in moist environments, adds to the aged appearance of this wall fountain. Photo by: Nejron Photo/Shutterstock.

For those of us who aren't patient enough to wait for natural growth, moss can be transplanted. Moss Acres sells four different mosses in clumps by the box, available individually or in a sampler box so you can try them all. To transplant, the clumps should be moistened, then pushed firmly into cleared soil—no digging, please — leaving about 1 foot between each clump. Choose a shady location where the pH is between 5.0 and 5.5. Lacking true roots, moss takes its nutrients from the air, which explains why it grows in areas of poor soil. It is also drought resistant, provided it has sufficient shade. A misting kit will help keep the moss green, or you can let it brown and wait for the rains to revive it later.

But what of moss as a design tool? The Japanese use moss to interpret nature, a fundamental part of their gardening. It is grown and shaped into thick, sprawling carpets or modern geometric forms, depending on the gardener's interpretive style. Moss is also used to impose a sense of maturity on Japanese gardens. While only the passing of time adds true age to a garden, careful moss placement will diminish the immature look of a recently planted plot. Garden designer Junko Liesfeld of Montpelier, Virginia, has used moss in her own garden for a naturalistic effect, under hedges, on rocks and along paths.

Liesfeld also likes to introduce moss in place of grass in small gardens. "So many people today have a tiny yard adjacent to a townhouse or condominium. A thick carpet of moss has a rich textured look that I prefer to grass." Add one or two well-placed trees and a few beautiful rocks and you have an inviting yet spare design that works within the small space.