For year-round interest, look to trees and shrubs with showy fruit By Jenny Andrews

A garden really can have something lovely to look at in every season. Just remember the four F’s—flowers, foliage, form and fruit. The last one, fruit, is often the most overlooked and underutilized as a garden-design element. If you’ve been dozing in the flower-filled lushness of spring and summer, wake up! The unexpected beauty of berries can take your garden through crisp autumn days and snowy winter landscapes. They can even give wildlife something to snack on. For any garden anywhere, there’s a berry to suit the site, and with colors ranging from red to orange, purple, pink, white, and blue, any color scheme is fair game. Read on to learn about nine berry-producing plants. 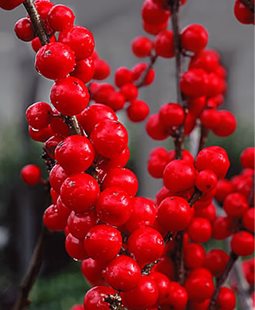 ‘Winter Red’ is widely considered the top-dog cultivar of Ilex verticillata, a deciduous holly native to the eastern half of North America. The fireworks of glossy, bright-red berries can run from late summer through early spring (depending on how hungry local birds are), making it a must-have for the winter garden. Prefers moist, rich, slightly acidic soils. Berries are more profuse in full sun. Requires a nearby stud holly (male-flowered) such as ‘Southern Gentleman’, ‘Apollo’, or ‘Raritan Chief’ to form fruit. Zones 3-9. 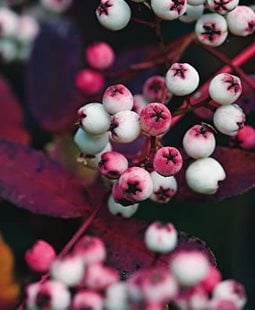 Underused as a landscape plant, mountain ashes deserve a closer look for fruit, flowers and blazing fall color. Fruits of most species are orange or red, but some are white (Sorbus hupehensis). Here, the pink-blushed pearls of S. hupehensis ‘Rosea’ are set against its burgundy autumn foliage. Most species are hardy in Zones 4-7. 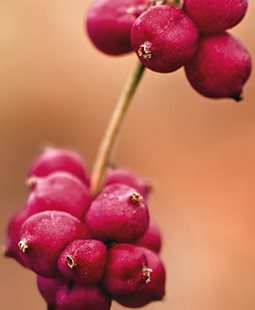 Coralberry (Symphoricarpos orbiculatus) is another low-key shrub that waits until winter to turn on the charm. Small, yellowish summer flowers turn into purplish-red fruit clustered along arching stems beginning in October. Native throughout much of the United States. Prune in early spring. Quite shade tolerant. Zones 2-7. 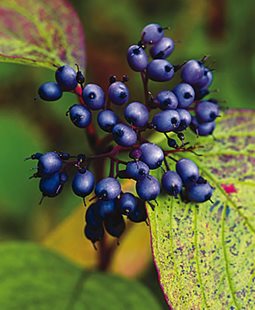 Blue fruit in summer and bare red stems in winter give this shrubby dogwood (Cornus alba ‘Sibirica’) multiseason appeal. Spreads more slowly than red-twig dogwood (Cornus sericea), so it works well in small gardens. Ideal for a hedge or shrub mass. Cut back hard to a foot or less in late winter for a flush of new bright red stem growth. Zones 3-8. 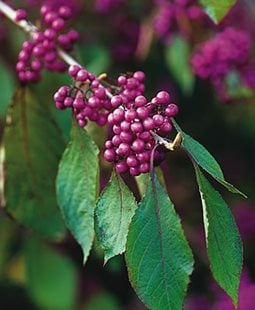 One of my all-time favorite plants—ever. A nondescript shrub until late summer, it’s worth the wait when its tiny pinkish flowers morph into traffic-stopping clusters of small, purple berries. The native Callicarpa americana is close to my heart, but other species are also quite nice. Pictured here is C. bodinieri, beloved of British gardeners. Zones 5-8, though C. americana stretches from Zones 6 to 10. Learn more about growing beautyberry shrubs. 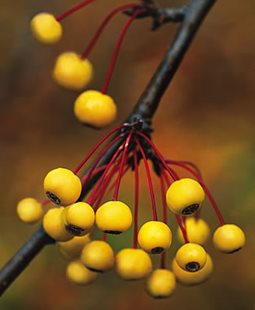 There are hundreds of crabapples on the market and though famous for their dainty spring flowers, their fall show of fruit (yellow, orange, green, and all shades of red) is invaluable for late-season landscapes. Shown here is Malus transitoria. Close kin to the apple, crabapple fruits are 2 inches or smaller. Pruning is usually unnecessary, but if you must, do it in late winter. Zones 4-7. 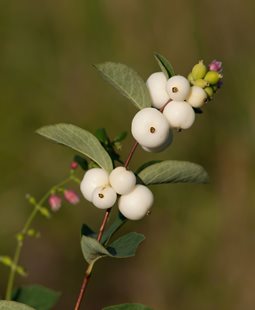 Symphoricarpos albus is native to the West and has arching branches that bear beautiful clusters of white berries that last well into winter. This deciduous shrub tolerates a range of soil types, even clay. It has small white and pink flowers in summer that attract butterflies and hummingbirds and is a critical host plant for the Sphinx Moth. Zones 3-7. 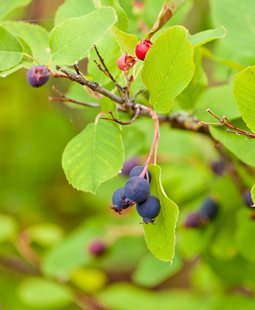 As if the delicious deep blue berries of Amelanchier alnifolia weren’t enough, you’ll also enjoy showy white flowers in the spring and gorgeous yellow foliage in the fall. This shrub is often used to fill the role of a small tree and is adaptable to many garden sites. Zones 2-7. 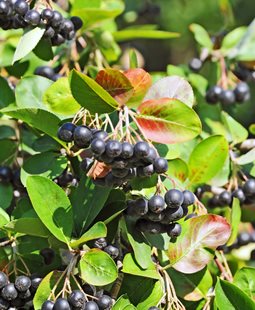 Native to Eastern North America, Aronia melanocarpa, produces black autumn berries and has attractive purple/red fall color. This is a good selection for wet areas, as it will tolerate soggy soils. Because of its tendency to sucker and form colonies, it is often used for mass plantings. Zones 3-8. Learn more about how to grow chokeberry shrubs.

Care: The most important thing to remember for good berries on your trees and shrubs is not to prune them at the wrong time, which has everything to do with when the plants form their flower buds—no flowers, no fruit. Many plants are just fine with minimal pruning just to clean them up and remove dead branches. For some, “crowd control” is needed to keep them in line with their allotted space, particularly with suckering shrubs. And for others, cutting back can bring on a flush of new growth and a more abundant display of berries. Beautyberry and some deciduous hollies can either be allowed to achieve their maximum size or annually cut back, almost like a perennial, to control size and create multiple stems packed with fruit.

Exposure: Most berry-bearing woody plants perform well in full sun to part shade. Though some are understory species in their native locales, sunlight generally enhances flower and fruit production. Full, deep shade will make for more open, less-fruitful specimens. However, snowberry and coralberry (Symphoricarpos) are noted for their shade tolerance.

Soil: Average, moderately rich soil will work for most of the plants shown here and their relatives. Some, such as winterberry (Ilex verticillata), mountain ash (Sorbus), and crabapples, prefer slightly acidic soils. Though good drainage is a wise course with most plants, a few trees and shrubs are adapted to wet situations, like mountain ash and snowberry.