A Guide to Selecting & Growing Bamboo in Your Garden

Timeless Symbol of Exotic Lands...or the Backyard By Paul Whittaker

Forest plants of old, bamboos evoke images of another continent, but with the impact they can have on our landscape, it may feel more like another planet. Here are some selections from the temperate regions of the East that are adaptable and versatile in the West. Though not giants of the jungle, they will grow happily in most gardens. Out of a hundred genera and 15 times more species of bamboo, at least one-fifth are “hardy,” coming from cooler climes where they can endure seasonal extremes of heat and cold. La Bambouseraie in Anduze, France, a bamboo garden and nursery where many of these photographs were taken, has a climate that allows some of the giant timber bamboos (used for construction) to reach the majestic proportions they do in the wild. Should you not be blessed with a Mediterranean climate, however, have no fear—you can still grow bamboo successfully, only missing out on the substantial height and the forestlike habit. Cooler gardens will produce shorter, more refined but well-structured specimens. 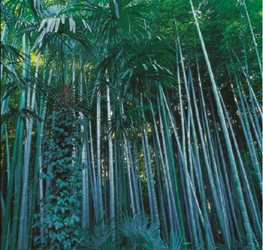 Shown in all its mature glory at La Bambouseraie in France. A timber bamboo of great eminence in its native China, where it reaches forestlike proportions. The ghostly gray-green culms are enhanced by the dark, forbidding background. This junglelike scene, complete with palms and creepers, belies the hardiness of bamboos—in their homelands many types are covered in snow during the winter months. (Zones 6-10) 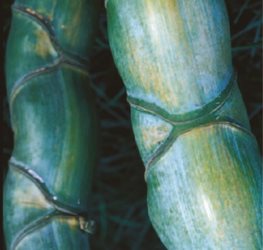 Known as the tortoise-shell bamboo because of the slanted and congested nodal formations at the base of its culms. The cultivar is not as tolerant of cooler regions as the straight species P. edulis, but worthy of a challenge. (Zones 8-10) 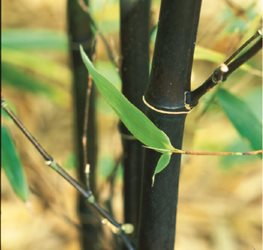 Unique black-caned bamboo is a striking addition to any collection. A sunny location quickly brings out the black color on the young culms, which emerge green. (Zones 6-10) 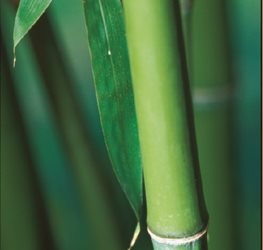 Introduced in 1941 and one of the best for hedging, screening and quick shelter. The vivid green culms and dark foliage are unperturbed by a harsh winter. (Zones 5/6-10) 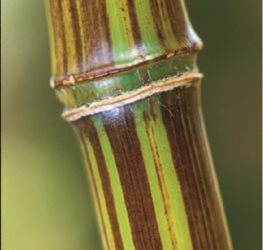 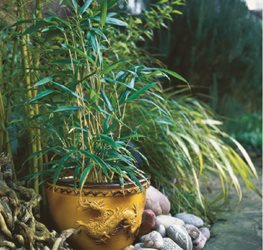 Some of the shorter bamboos can be successfully confined to pots, but don’t forget to water them. Use heavy compost for stability but with good drainage. Surround with a few sea-washed pebbles and twisted timber for a landscape in miniature, proving you don’t need a large garden to grow bamboo. The leafy Japanese type used here is also known as the green-onion bamboo because the culms can be swollen on mature plants. (Zones 5/6-10) 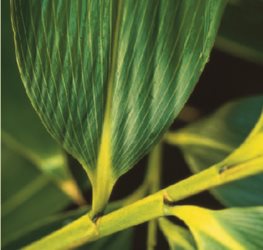 The tropical appearance of this lush Japanese bamboo contrasts with its hardiness. Beware of its aggression—it can romp through your garden like an advancing army. Well worth the risk if controlled. (Zones 4-9) 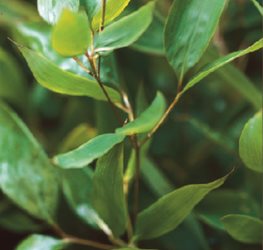 Short species that looks great in a pot or as underplanting for taller specimens. Pointed leaves emerge from thin zigzag culms to provide a squat but spiky appearance. Uniform winter bleaching of the leaf tips is highly ornamental. (Zones 5-9) 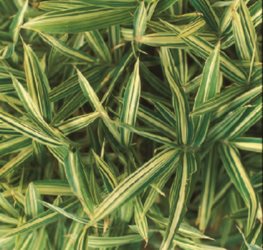 Dwarf grassy bamboo equally at home in a pot as in the garden. Can be sheared or clipped to encourage the freshest growth and the brightest color. (Zones 5-9) 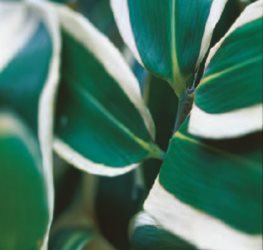 Prized for its winter effect. The margins of the leaves pale to a creamy silver as winter cold sets in. Short ground cover that can be sheared to the ground in spring to provide fresh new growth. (Zones 6-10) 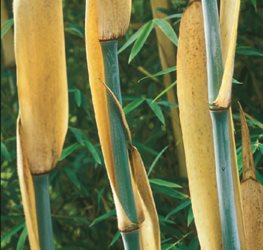 Recently introduced clumping species from the Himalayas with noteworthy cultivars such as ‘Kew Beauty’, ‘Lang Tang’ and ‘Merlyn’, all with pale blue culms forming on mature plants. Tiny delicate leaves will benefit from some shade and humidity in arid air, but in cooler coastal areas they will perform effortlessly, maturing into tight clumps of unique coloring with the froth of the foliage held high. (Zones 7-9)

Appeal: For tropical or Asian ambience. Quick growing, long-lived, easy to maintain. In tight growing clumps or grove-forming colonies, culms (canes) in many colors, with grooves, stripes, knobbles and swellings galore. Ideal for cutting and decoration. Leaves range in appearance from tiny and needle-like to variegated to massive plates of glossy green.

Zones: Most temperate bamboos tolerate harsher conditions than their given hardiness zones once established; young plants are more vulnerable. Excessive heat, aridity and exposure have to be considered also. Generally Zones 6-9 are best for most species, but microclimates can allow experimentation.

Exposure: Some large-cane bamboos like phyllostachys can take hot gales or winter blizzards, as in their native China. Sasa from the maritime climate of Japan and thamnocalamus from the foothills of the Himalayas relish cooler coastal and more montane areas; with a little shade and extra moisture they can be tried almost anywhere.

Soil: Hardy bamboos are adaptable. Avoid dry and desertlike soils or swamps. However, dry sandy soils can be amended with organic matter, and waterlogged soils can be drained. Clay can be broken with sharp sand to allow the bamboo to penetrate. Bamboos can prevent erosion on slopes, and they grow in a wide range of pH—except the extremes of acid or alkaline.

See how bamboo can be used to screen the perimeter of a small garden and get tips for selecting the best bamboo plants.

Care: Young plants establish more quickly than huge specimens. Water new plants during the first two summers. In dry climates or during drought, water even established bamboo twice a week (it’s hard to over water bamboo during a hot summer). Keep roots cool and moist with a mulch of rotted organic matter, which provides nutrients. In time, fallen leaves and sheathes provide all the mulch and food required. Remove old and weak culms; prune low branches to show colorful culms. To control running bamboos, chop off runners periodically; barriers are not always effective and can be unsightly (learn more about barriers for bamboo).