Through subtle design and educated plantsmanship, Dan Pearson has transformed the tradition of British naturalistic planting into a dynamic, contemporary form By Tim Richardson

If there is one garden style that is emphatically associated with Britain, it is that of plantsmanship and particularly the tradition of herbaceous border design, which was developed in the early 20th century by Gertrude Jekyll and others. The British climate is notoriously fickle, but it is also perfect for growing plants from all over the world, and many British gardeners have been bitten by the plant-collecting bug. In recent years, the plant palette has expanded still more with the onset of climate change, and now Australian tree ferns and subtropical plants are a common sight in British gardens. British designers excel at creating naturalistic planting schemes with their diverse plant palette, even though it often requires great artifice to blend such disparate plant groups. Whatever the theory, planting design is always closely linked with the personality of the designer, which makes it an idiosyncratic art form. 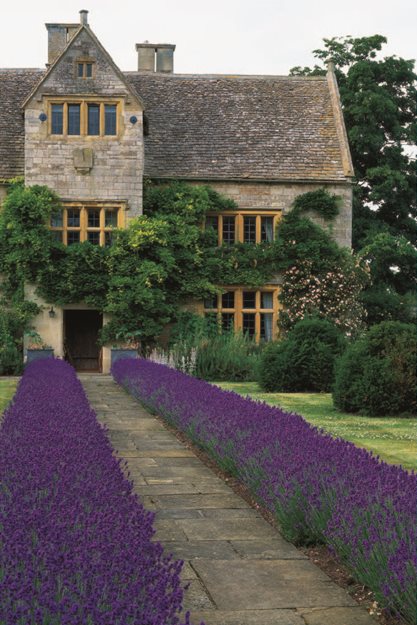 Traditional formality still has its place, with the front path lined with clipped lavender, but the clipped yews are being encouraged to grow into slightly asymmetrical forms. Photo by: Nicola Browne.

During the late 1980s and 1990s, while most British garden designers were still entranced by the Arts and Crafts traditions of herbaceous planting that dated back almost a century, Dan Pearson was almost alone in advocating a more modern solution for modern garden situations. In a string of private gardens, and through a succession of television series in the 1990s, he promoted the idea of a garden that united a love of plants and the natural world with a kind of stylish functionalism that really appealed to garden owners under the age of 40. 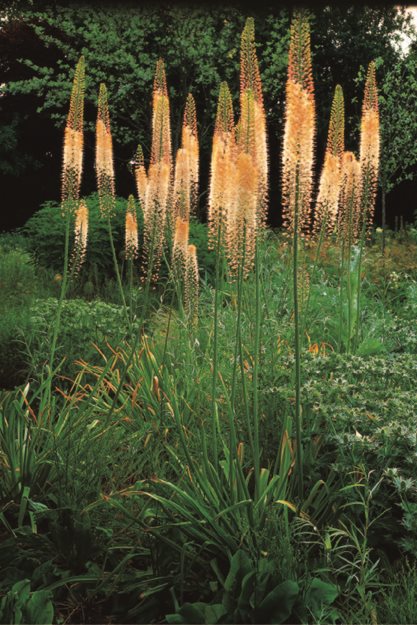 One of Pearson’s signature plants, blazing orange foxtail lily (Eremurus ‘Cleopatra’) makes a stand in the border in June at a Warwickshire manor house. Photo by: Nicola Browne.

By the late 1990s this approach and attitude had gone mainstream, and Pearson was rightly hailed as an innovator ahead of his time, just as John Brookes had been in the 1960s. If anything, however, Pearson’s work has become more naturalistic over the years, a testament to his serious credentials as a plantsman, with a Kew training and years of experience with plant communities in the wild all over the world. One of Pearson’s formative influences as a gardener was Beth Chatto, whose garden in Essex, to the east of London, demonstrates the way a garden’s style can reflect the habits of self-supporting communities of plants as they thrive in nature. To this Pearson adds a deep appreciation of the site’s existing sense of place, which he aims to enhance and reflect with his designs. 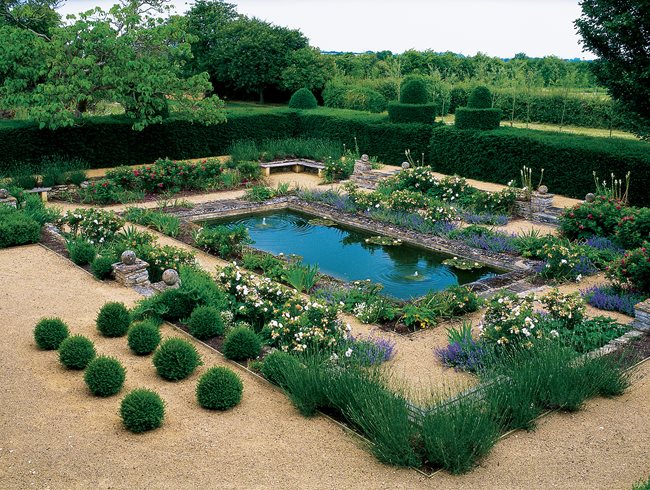 A stone-edged pond is the focus of a romantic rose garden that plays with formal/informal contrasts—lax shrub roses versus orderly boxwood balls. Photo by: Nicola Browne.

Pearson’s gardens are usually based on strong, clear structural bones, both in terms of sinuous, elegant curves in the hard landscape and ground plan, and in a liking for horticultural features such as lines of pleached trees, or clipped yew hedges in bulbous form. A sculpted spatial quality resounds through the work. In recent commissions Pearson has explored an ever more naturalistic feel, with an emphasis on wildflower plantings with mown paths meandering through them, plantings of native trees, subtle turf landforms and the decorative possibilities of walling based on traditional styles. Decorative plantings near buildings often give way to native-species plantings at the boundaries of the garden. 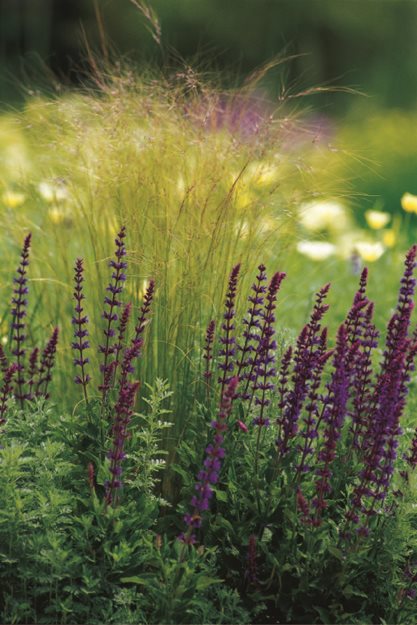 Planting in the silver garden is ethereal and light, with a tapestry of silver foliage plants and ornamental grass (Stipa tenuissima), highlighted with blue spikes of Salvia verticillata ‘Purple Rain’. Photo by: Nicola Browne.

One of Pearson’s most significant current projects is a bold contemporary garden of contrasts for a Jacobean manor house in Warwickshire. In a series of hedged and walled enclosures in the English 20th-century tradition, Pearson has played with ideas of formality and informality by clipping topiary into vegetable shapes (carrot, aubergine and leeks!), and creating a vibrant “hot” border of oranges and reds right next door to an elegant garden of silvers and whites, bordered by yew hedges and a stilted hornbeam walk. There is a formal canal, a nuttery, an arboretum of native British trees, and a “wind garden” of perennials that move and rustle in the breeze. 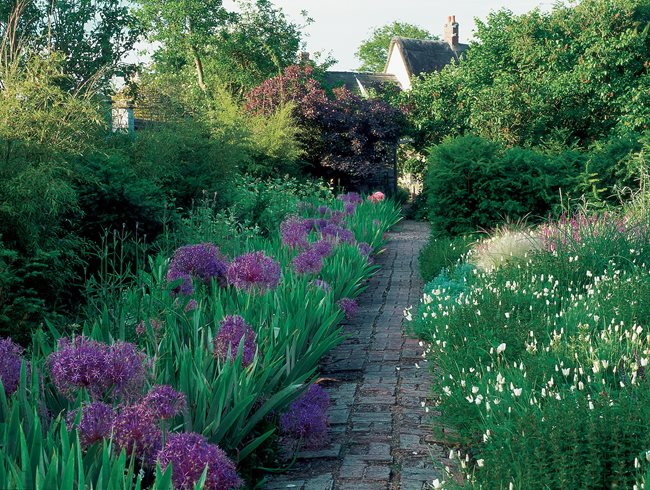 Recently Pearson’s practice has expanded internationally, with projects in Italy, the United States and Japan, where he is working on a 500 acre landscape park (the Millennium Forest) on Hokkaido, northern Japan, and five courtyard gardens for a new housing development in Tokyo.

For more information on the work of Dan Pearson, see www.danpearsonstudio.com.

Learn more about different garden styles, plus get design inspiration and timely plant information in our weekly newsletter!

Other examples of the British naturalistic planting style: 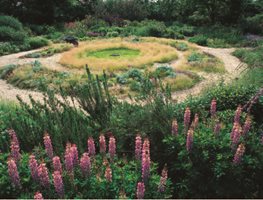 Pam Lewis’ garden in Dorset, Sticky Wicket, has become something of a cult destination for herbaceous-plant enthusiasts in recent years, and Pam has secured a wider audience through her book Sticky Wicket-Gardening in Tune with Nature (Frances Lincoln). The Round Garden, set around a camomile lawn and incorporating rings of native grasses, is one of the main attractions, as it chimes with the current preoccupation with ecological gardening. At Sticky Wicket the butterflies, frogs, birds and bees are as important as the plants. See www.stickywicketgarden.co.uk. 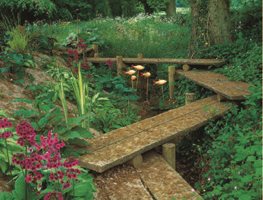 Julie Toll is a widely respected designer who was banging the drum for an ecological and naturalistic style long before it was fashionable. She also has an understanding of the Modernist architectural tradition, and this inspires the subtle linear structure that underpins all her work. Julie is a specialist in meadow, water and woodland-fringe design-here primulas and hostas create a natural-looking water margin. See www.julietoll.co.uk.

RELATED: How to Create a Meadow Garden