A Passion for Mushrooms

When I was young, hunting mushrooms was a family affair. We are Italian, so wild-food collection is in our genes. And I loved it: the treks through the cool woods, the moment the pattern of camouflaged mushrooms emerged and they suddenly appeared everywhere. It felt wondrous when a mushroom popped up where there wasn’t one the day before — a tendency of mushrooms that lends them an aura of mystery. But, scientifically, it’s all pretty straightforward. Mushrooms are the reproductive structures, the fruiting bodies, of fungi. When you kick up the duff of the forest floor or break open a rotting log, that cotton-candy-like stuff is a fungus. It’s composed of strings of microscopic cells that absorb nutrients and water from whatever substrate it’s living in. When the fungus delivers water to the nascent fruiting bodies, they swell up like a sponge and push through the earth, appearing as if by magic. 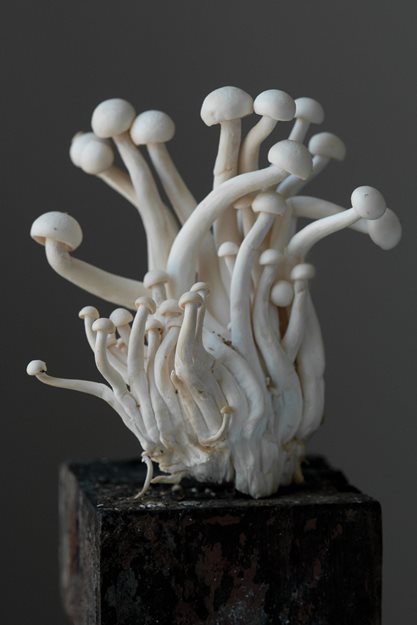 Beech
This is a varietal of the beech mushroom (in the genus hypsizygus), which is native to East Asia. The common names for these mushrooms vary, and include white beech oyster and clamshell oyster mushroom, but the experience is the same: They are all firm and crunchy. Photo by: Lynn Karlin.

My original sense of wonder hasn’t dissipated throughout the many years I have studied mushrooms. But mushrooms weren’t much on my mind throughout my young adulthood — not until I went hiking in a Colorado conifer forest. One minute we were walking through the woods, and then suddenly, as if a veil was lifted, we witnessed the conversion of the forest floor — everywhere, porcini. 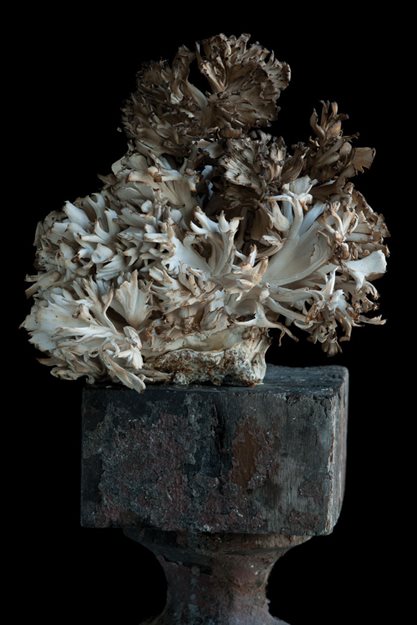 Hen of the Woods
Hen of the woods, also known as maitake (Grifola frondosa), is an East Coast parasite that grows under oak. It is a choice edible, recently cultivated. It has been used in traditional Chinese medicine for thousands of years. Photo by: Lynn Karlin.

I developed the foraging bug big time after that, but I was often skunked. I didn’t really understand why the mushrooms I wanted to eat grew where and when they did. That’s why I joined the New York Mycological Society: to unearth the secret of successful hunting “for the pot.” At early meetings of the club, I feigned interest in the lectures on slime mold or whatever, but honestly, I just wanted to learn where I could find lots of morels. 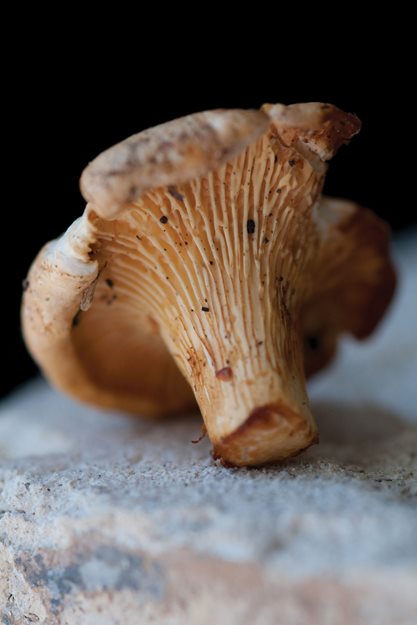 Chanterelle
There are a number of chanterelle species. This one, Cantharellus cibarius, is the most common, and it is wonderful, with an aroma of apricots. It is a mycorrhizal fungus that grows in association with beech, oak, and conifers. It is exclusively wild-crafted. Photo by: Lynn Karlin.

So I began to attend forays — first those organized by the NYMS, then further afield. These events, put together by mycological societies or professional mushroom hunters all over the country, are like Trekkie conventions for mushroom enthusiasts. There are guided walks in the woods with mycologists, classes on mushroom cultivation, lots of mushroom eating, and lectures by academics. I started to recognize types of mushrooms, remember the nomenclature, and understand their ancient and complex relationships with plants. In essence, I learned to look under the right trees. 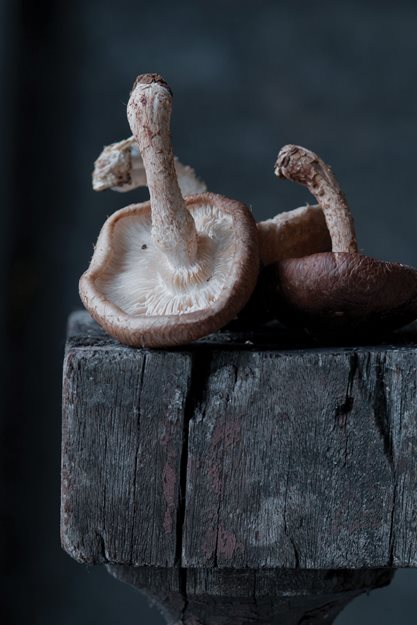 Shiitake
Shiitake (Lentinula edodes) is native to East Asia, where it has been cultivated for a millennium. The ease of growing shiitake makes it one of the most popular mushrooms for home cultivation. It is an excellent edible and is also an important medicinal in traditional Chinese medicine. Photo by: Lynn Karlin.

I discovered that some fungi, the saprophytes, are the recyclers of nature, and if it weren’t for them we’d be living under miles of plant debris. Most of the mushrooms we buy in stores are saprophytes, largely because they are easy to grow. You just need to give them their preferred food — wood chips in some cases. The Japanese figured out how to cultivate the shiitake, a decayer of Shii trees, centuries ago. In the West, we started with Agaricus bisporus, the white button mushroom, which decays compost. But mushrooms are no longer a one- or two-species commodity. An increasing diversity of cultivars like hen of the woods and blewits are finding their way into American markets. 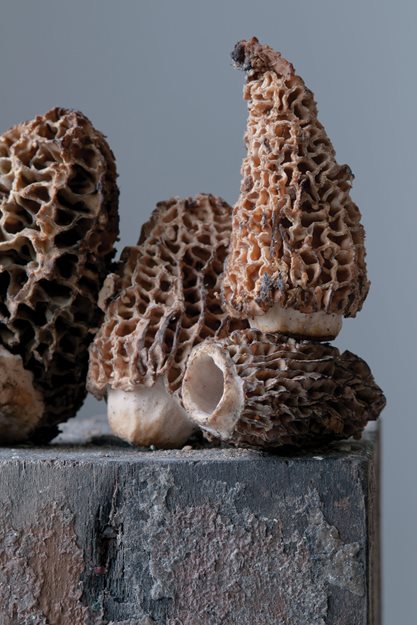 Morel
Morels (morchella) are perhaps the best-known edible mushroom. Some species are mycorrhizal while others are saprophytic, so it's hard to pinpoint the conditions that lead to fruiting. Photo by: Lynn Karlin.

Truffles are one of the few types of cultivated mushrooms that are not saprophytes. They are fussy and hard to grow because they are mutualists: the fruiting bodies of mycorrhizal fungi, which live on and in the roots of living plants. They trade nutrients in the soil for sugars produced by the plant. In general, plants without a mycorrhizal fungus living on their roots do not thrive, and in the case of conifers, mycorrhizal fungi are so important that without them the tree may die of malnutrition. For those who cultivate truffles, it’s worth establishing an orchard to support them because they can sell for thousands of dollars a pound. But all the other mycorrhizal fungi we eat, like porcini and chanterelle mushrooms, are picked in the wild. 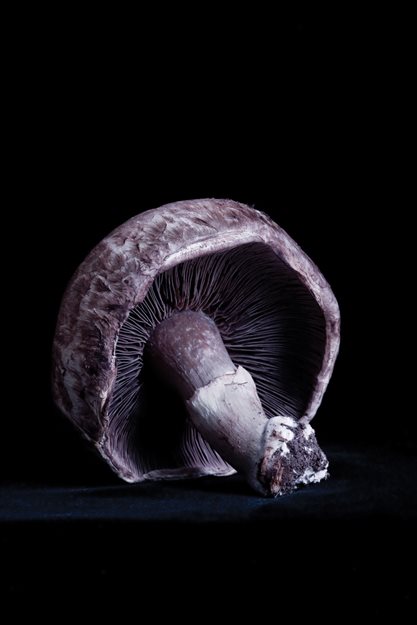 Portobello
The portobello (Agaricus bisporus) is a grown-up crimini mushroom; the portobello has more taste because it has mature spore, and spore has flavor. Photo by: Lynn Karlin.

Then there are all the fungi we can’t always see: the fungal pathogens that can kill plants and the marvelous endophytes, which are fungi that live between and within the cells of all plants and can function as a kind of shadow immune system. Without them, if farmers sterilize their seedlings, for instance, the plants are less able to tolerate such stresses as drought. 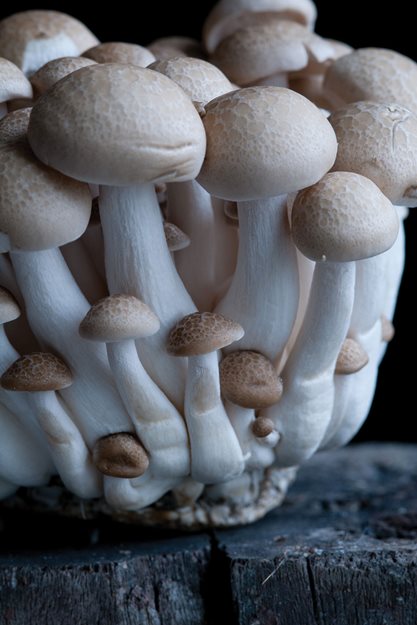 Beech
Like all mushrooms, the brown beech, or shimeji (Hypsizygus tessellatus), produces large quantities of vitamin D2 when exposed to ultraviolet light. Photo by: Lynn Karlin.

I was stunned to learn of the sheer volume of fungal life on Earth: 25 percent of the biomass! Six times more species than plants! One fungus is the largest living organism on the planet! Up to 10 spores inhaled with every breath! Really, I felt like I was being pummeled by fungal revelations. And they continue. A recent study describes the key role fungal enzymes could play in the creation of biofuels.

Like most people, I long defined existence by what I could see, when, in fact, it’s what we can’t see — the microbial community — that is so vitally important to life. I think we all try to find ways to understand truths that are bigger than ourselves. The study of fungi was the window by which I came to appreciate, both literally and metaphorically, that a spoonful of soil contains an entire world.

Eugenia Bone is author of Mycophilia: Revelations from the Weird World of Mushrooms (Rodale, 2011).