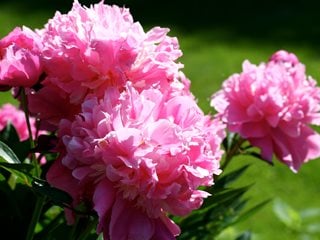 Q: My neighbor tells me fall is the time to divide peonies. Can this be right? Are there other perennials I should divide then? — Patricia Christian, Branchburg, N.J.

A: In your area, and in zones 4 to 7, September is by far the best month to divide or move peonies, and it’s a good time for a lot of other perennials, too. Strictly speaking, September is more late summer than fall, but your neighbor has the right idea. Just don’t wait too long: Newly divided perennials of all kinds need at least 4 weeks of growing — 6 weeks is even better — before the really hard frosts arrive.

People tend to think of spring as the time to divide perennials, but for many species there are major advantages to waiting until after Labor Day, no matter what zone you live in. In the spring, when many other garden tasks are vying for our attention, the window of opportunity is narrow: just a couple of weeks between when the plants sprout and before they get more than 2 or 3 inches tall. In late summer and fall, the pressure is off; you have four to six weeks to get the work done. But the most compelling reason to avoid spring division is that you’ll get fewer flowers that season. (The exceptions to this rule — fall-flowering plants such as asters and chrysanthemums — are best divided in the spring, which allows them time to recover before blooming.) Consider daylilies, for example. These perennials are so tough you can move them anytime the ground isn’t frozen; they will rebound eventually. Expert growers, however, strongly prefer the fall to the spring for transplanting and dividing. No matter how early in spring you get to the job, digging up daylilies then invariably will diminish the summer’s flower count. By waiting for late summer, when blooming is finished and the weather begins to cool slightly, you give the new divisions the longest possible time to develop new roots, leaves, and, ultimately, flower stalks the next season.

Peonies are a little different from most perennials in this regard. Like Oriental poppies or Siberian irises, they rarely require dividing; but if you want to break a mature plant into several smaller ones or to move an existing plant, the work is best done in late summer or early fall. Peonies divided in the spring grow very poorly. So, four to six weeks before hard frost, when the leaves begin to look ragged, cut back the foliage and dig up the plants. On the fleshy crown you will see protruding dormant buds (“eyes”) that will be next spring’s red shoots. (The reason to wait for the leaves to begin to decline is that the longer the leaves can send energy to the roots, the stronger these eyes will be.) With a sharp knife, cut the roots into sections that have at least three prominent eyes. Set each division in its new spot with the eyes facing up, at a depth of no more than 2 inches below the surface. (Peonies planted too deep will grow, but they’ll bloom poorly or not at all.) It may take two years for these three-eye divisions to become large enough to bloom again. Dividing the plants into larger root pieces will produce bigger plants and flowers sooner. On the ease-of-dividing scale, other perennials fall between the resiliency of daylilies and the fussiness of peonies. But almost anything can be divided at the end of the season, when the soil is well-warmed and moist and the sun is less intense — conditions that are perfect for new root growth.