An emphasis on architectural unity is the hallmark of British designer Christopher Bradley-Hole’s gardens, but his spontaneous sense of beauty adds delight By Tim Richardson

A chic urban look, particularly for city gardens, has been very much in vogue in the UK since the mid-1990s, when it was promoted by (among others) Dan Pearson and Stephen Woodhams. This design trend was a development of the functionalist, Modernist ideas of John Brookes, who came to prominence in the 1970s with grid-pattern gardens that were emphatically designed for people and their leisure needs, rather than for horticulture, which had previously been the British tradition. Brookes was influenced by California Modernists such as Thomas Church, but his work and that of his British followers has always been distinguished by an abiding interest in plants. This crossover between horticulture and Modernism was a typical British compromise that actually worked rather well. The look was given mass appeal in the late 1990s and early 2000s by an upsurge of gardening “makeover” programs on British TV, promoting the delights of decking, barbecues, “water features,” architectural plants in stainless-steel planters and cobalt-blue pots for decoration. There has been some backlash from the cognoscenti as a result, but the popularity of this approach when realized at a high level has not diminished. 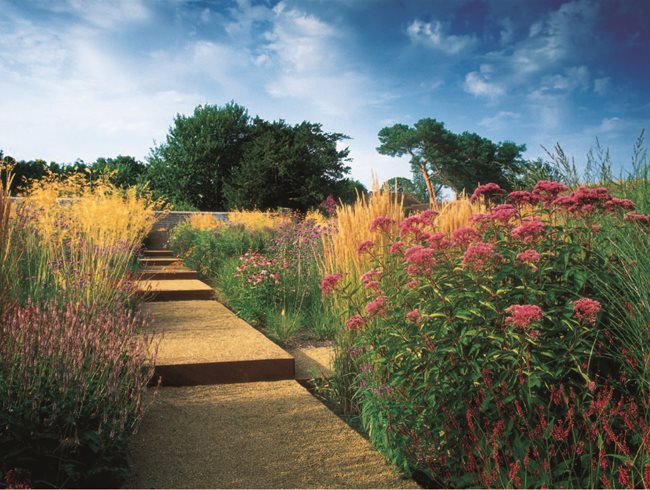 Bradley-Hole’s take on a traditional walled garden, where a grid of steel-edged paths contains complex drifts of grasses and perennials like Joe Pye weed and persicaria. A style much influenced by the European New Wave movement, yet horticulturally richer. Photo by: Andrew Lawson.

Originally trained as an architect, Christopher Bradley-Hole is a thorough-going Modernist, committed to the doctrines of functionalism, asymmetry and architectural unity that that design ideology espouses. The European New Wave planting movement has decisively affected his work during the past decade, but he comes from quite a different tradition. Naturalistic plantings have always looked good up against the smooth white or gray concrete of Modernist buildings, or bordering the expansive cedar-wood decks familiar from the California Modernist tradition of Thomas Church and others, but Bradley-Hole has gone much more deeply into planting philosophy than any of his Modernist forebears or contemporaries.

Bradley-Hole’s style is wedded intimately to the clients’ needs—whether or not they have children, whether they are keen horticulturists, what times of day they like to use the garden. For one London client with a young family, Bradley-Hole created the simple space shown below, made up of trees displayed sculpturally against colored concrete walls, so that the children could play in the open space at the center of the garden, while the adults could enjoy an elegant retreat for evening cocktails. 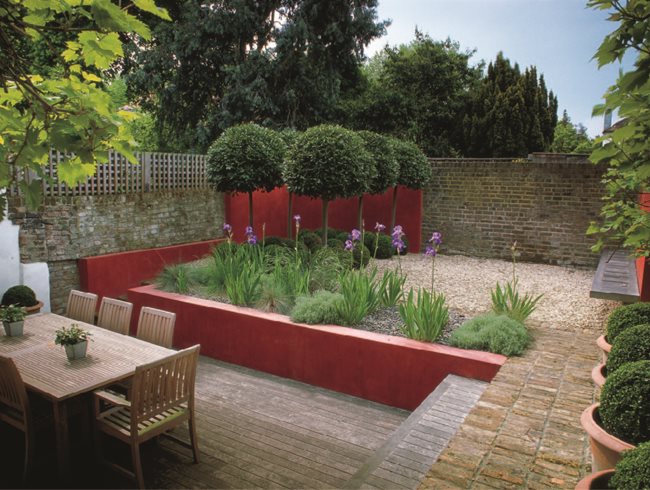 View of the play space with steps leading down to a dining area. In this tiny space so much had to be resolved—a change of levels, different uses—but the solution is functional, colorful and supremely elegant. Photo by: Jerry Harpur.

It is Bradley-Hole’s attention to detail, both in planting and in hard materials, that is his signature, a characteristic he ascribes to his Modernist background. A typical Bradley-Hole garden design unites formalist rigor with exuberant but carefully planned drift plantings of perennials and towering grasses such as Stipa gigantea. At one recent garden in Sussex (shown on these pages), he has taken this methodology to its logical conclusion in formalist terms by creating a simple (but large) grid of planting squares, designing each one individually yet allowing for rhythms and echoes to develop between them. The result is a burnished, moving ocean of plants awash with golds, blues, purples and reds.

Bradley-Hole works mainly for private clients and undertakes commissions on all scales, keeping his practice relatively small and un-corporate, as is the way with most British garden designers. However, one of his newest projects is indisputably large-scale and high-profile: the redesign of the area which had been the playing pitch at the former Arsenal soccer stadium in Highbury, north London. Here he is transforming the space into a communal park for residents of the new apartments, subdivided informally into various garden “rooms” organized on an abstract grid of hedges and glass walls, many of which are also waterfalls.