James and Kerry West, farmers in New South Wales, have been cultivating "fruit salad trees," each of which produce several kinds of fruits. By Anna Laurent 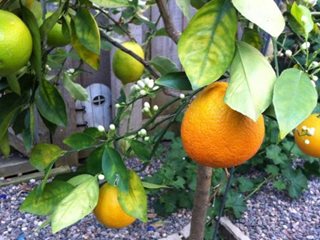 Photo by: Gardening with Children LLC

Last year I met a woman who had just moved into a house with an extraordinary tree, she said-one that grew lemons, limes, and oranges. On the same tree? A backyard citrus bounty is standard practice in Southern California, but generally a yard might have one or two trees with different fruits. You have grapefruits, but no lemons, so you meet your neighbor by asking to pluck some of his. This woman's fruit claim was incredibly exciting, but then she seemed to disappear, and with it my chance to see her tree. Several months later, while running through Oakland, I passed a tree with what looked like immature lemons, limes, and grapefruits—at least, the green fruits were different sizes, and they seemed to be shifting into hues of different colors. I returned the next morning with my camera, and chanced to meet the house's owner. I introduced myself and expressed my enthusiasm for his remarkable tree. "Tell me, please, is this tree as wonderful as it looks?" He matched my excitement and exclaimed "Oh, truly, it is. All the fruits you see will ripen into the most delicious grapefruits, every one of them." Ah. "All of these will become grapefruits, then? Even the little green ones" "Oh, yes, aren't we lucky!" I love a good grapefruit, but that was not what I had come for.

I've been pursuing the Tree of Many Fruits for some time now, and have yet to find one. Now I could have one in my backyard. Like many of my favorite trees, it hails from Australia. James and Kerry West, farmers in New South Wales, have been cultivating "fruit salad trees," each of which produce several kinds of fruits. The citrus tree bears oranges, mandarins, lemons, limes, grapefruits, tangelos, and pomelos. A stone fruit tree grows peaches, plums, nectarines, apricots, and peachots. The apple trees offer two, three, or four varieties of apples, and the pear trees produce just as many varieties of Asian pear.

Kerry West tells their story in a video that shows their farm, their process, and a couple kangaroos. The project began as an experiment twenty years ago, and they were surprised at how easy it was to graft the various fruits. "We had to educate people, because they all thought it was a joke."

It sounds like magic, but it's not. Grafting is a ancient practice that originated in China, and is currently applied to many edible fruit trees to ensure consistency, especially with apples and oranges, which are not true to seed. Grafting produces a second generation of fruits that are the same as the first. The technique is relatively simple: one plant is selected for its roots (the "rootstock") and the other for its fruits, leaves, or branches (the "scion"). The rootstock and scion are joined with a combination of slicing & adhesion. When the vascular tissues fuses together, the grafted parts function as one plant.

As a rule of thumb, successful grafting is a measure of species similarities—the more closely related the fruits, the better they will grow together. That's why the Wests group their citrus and stone fruits—same family, same tree. Fruits are not the limit. It's been mentioned that herbs could be a good candidate for grafting, and I agree. Because how many turkeys can I roast with the abundant rosemary in my garden? With a fruit salad tree, at least I'll have lemons and oranges for the marinade.