PerennialsDiscover the right perennial plants for your garden. 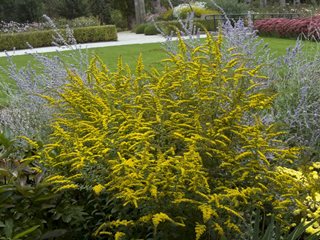 One of the most welcome sights in the late-summer landscape are fields of goldenrod plants, with their tall flower plumes blazing brightly like golden-yellow flames. However, this gorgeous native wildflower has yet to gain the widespread acceptance it deserves in American gardens. Perhaps because of the mistaken notion that it causes hay fever—or because it is sometimes considered to be a weed with little ornamental value.

If you’ve been avoiding goldenrod for these unwarranted reasons, it’s time to take another look at these late-season beauties. Newer cultivars with showier flowers and more refined growth habits should dispel any misconceptions that goldenrod is nothing but a common prairie plant. Many of the native wildflower species also merit a spot in the garden, not only for their vibrant fall color but also because they are an important late-season food source for bees, butterflies, and other pollinators.

Varies, depending on the species. Most are durable enough to tolerate cold winters and hot summers.

Goldenrods have a long bloom period, typically flourishing from late summer to mid-fall. Some cultivars, such as Solidago rugosa 'Fireworks', will continue to flower until the first frost.

From under a foot to more than 6 feet. 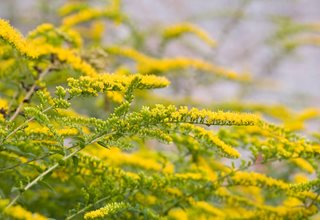 Although members of the aster family (Asteraceae), goldenrod flowers bear little resemblance. Instead of individual daisy-like flowers (ray flowers), goldenrods produce clusters of tiny yellow or gold florets, some in the form of broad and nearly flat-topped corymbs and others cascading in feathery panicles from arching stems. Some varieties, such as Solidago sphacelata ‘Golden Fleece’, also have attractive semi-evergreen foliage that extends the season of interest.

Ragweed vs goldenrod: Does goldenrod cause hay fever?:

Contrary to common belief, goldenrod pollen does not contribute to hay fever or allergy symptoms because it is too sticky to go airborne. The more likely offender is ragweed (Ambrosia), which blooms around the same time and looks similar.

There are more than 100 species, and most are native to North America. While the majority reside in sunny meadows and prairies, others prefer semi-shaded woodland locations, boggy environments, and even salty coastal areas. Because the different species are found growing in a wide range of environments with different soil conditions, consider a goldenrod’s native habitat before choosing a variety for your garden.

Goldenrods grow from either clump-forming crowns or by rhizomes. Clump-forming types are better suited for manicured garden beds and borders because they won’t spread aggressively. Plant the more rambunctious rhizomatous types where you can contain their spread or in a naturalistic garden setting where they will be less intrusive.

Most crave full sun, with the exception of woodland species which grow well in partial shade.

They will thrive in just about any average garden soil with decent drainage. Some species also adapt well to heavy clay, sandy, or rocky soils. Avoid planting in overly rich soil which can lead to leggy growth.

Like many wildflowers, goldenrod is extremely easy to grow from seed, which can be sown directly outdoors in fall or spring or started indoors 6 to 8 weeks before your last frost date. If you plant the seeds in late fall or early winter, they will begin to germinate when the temperatures warm the following spring. No matter when you plant your seeds, be sure to sow them on the soil surface because they need sunlight to germinate.

Whether you're growing seedlings or nursery-grown plants, provide adequate space between them (anywhere from 1 to 3 feet, depending on the size at maturity) to permit good air circulation and to keep spreading types from encroaching upon neighboring plants.

Like most wildflowers, goldenrods are wonderfully carefree, drought tolerant, and disease resistant. But when growing them in a perennial garden, there are some simple steps you can take to keep them looking their best and to control their spread. 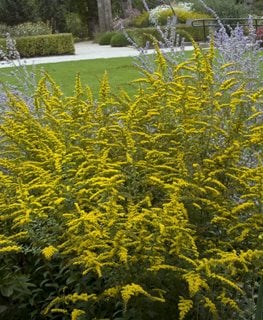 In 5-year trials conducted by the Chicago Botanic Garden, ‘Fireworks’ received the highest rating, lauded for its long, arching flower spikes that cascade from the plant like bright-yellow fireworks. This clump-forming perennial was also admired for its compact shrub-like form and slow spreading habit. While some wind down their floral display by early autumn, this late bloomer will keep your garden exploding with color until the first frost. 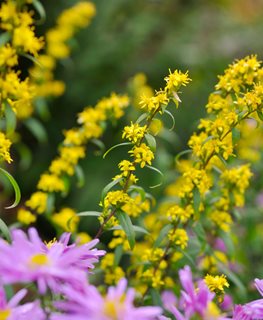 From August through early autumn, this handsome native is covered with clusters of tiny daisy-like flowers that bloom all along the blue-green stems (thus the name). Tolerant of shade and dry soil, it’s an ideal choice for those challenging dry spots in the shady garden. This attractive clump-former won’t spread aggressively, so don’t be afraid to plant it in mass to create greater impact. 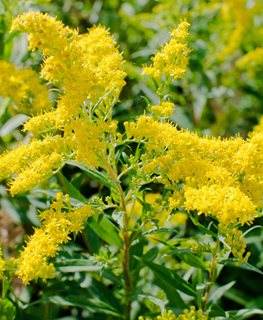 A native of the East Coast, this is a useful plant for seaside gardens with sandy soil and salty air. From late summer through late autumn, its dense clusters of bright yellow flowers provide an attractive contrast to the lush dark green foliage. The flowers are also an important food source for fall-migrating monarchs. In the garden, it partners well with other native sandy soil lovers, such as Atlantic coastal panic grass (Panicum amarum), switchgrass (Panicum virgatum), and American beach grass (Ammophila breviligulata). 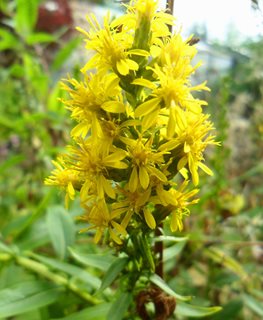 True to its name, this is one of the showiest of the native species, displaying upright panicles of bright yellow flowers held by attractive red stems. The densely packed flower clusters are up to a foot long and aim for the sky like bottle rockets ready for flight. This easy-going species grows well in sun or light shade and tolerates a wide range of soils, from moist clay to dry sand. Pairs well in the garden with other tall late-blooming perennials such as blazing stars and New England asters. 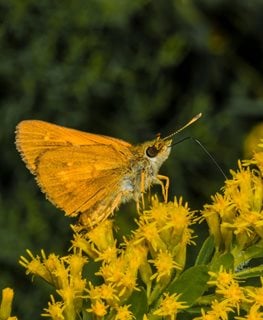 Also called anise-scented goldenrod, this East Coast native has fragrant dark green leaves that give off a pleasant licorice scent when crushed. In late summer, it becomes laden with broad panicles of upturned flowers that make a great landing pad for pollinators attracted to the sweet scent. Because its dried leaves and flowers are often used in cooking and to make herbal teas, this aromatic plant was named the state herb of Delaware, where it is commonly found growing in coastal areas and along the edges of marshes and thickets. 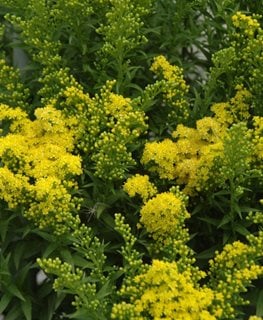 The name says it all: A dwarf version, barely a foot tall covered from mid to late summer with airy sprays of tiny lemon-yellow flowers. If cut back after flowering, it often reblooms, extending the season of interest well into fall. Unlike taller ones, this petite beauty is ideal for the front of the border, as an edging plant, or even grown in containers. 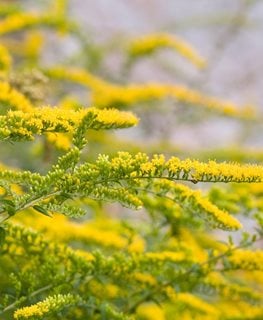 Another compact specimen, at under 2 feet, ‘Golden Fleece’ blooms later in the season than Little Lemon®, brightening the fall garden with arching sprays of golden-yellow flowers through late October and even into November. Even when not in bloom, this cultivar has ornamental value because of its lovely heart-shaped foliage, which slowly spreads over time to form an attractive semi-evergreen groundcover. Its low, spreading growth habit and tolerance of difficult soils makes it a good choice for naturalizing. 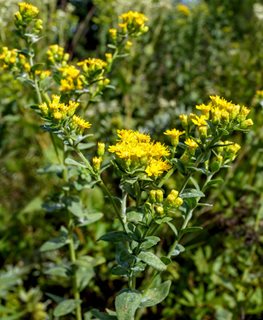 Growing to more than 5 feet, this is one of the tallest, but true to its name remains stiff and upright even under the weight of its large flat-topped clusters of pale-yellow flowers spanning up to 10 inches across. The soft gray-green leaves are another attractive feature and often turn shades of red in the fall. Blooming late in the season, this native prairie plant is a staple on the menu for pollinators gathering food reserves for winter. 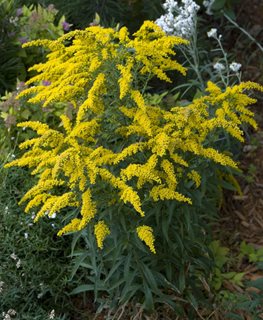 For several months beginning in mid-summer, this long-blooming cultivar is covered with large plumes of golden-yellow flowers rising above tidy mounds of deep green leaves. A garden-friendly clump-former with a bushy growth habit, it lends itself nicely to borders and mass plantings. Unlike many goldenrods, it grows best in moist conditions and should be kept well-watered. 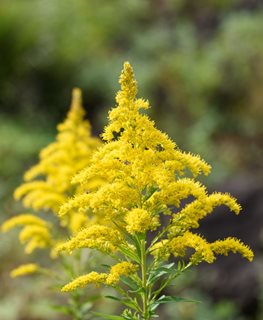 Tall goldenrod, and two other nearly identical species -- giant goldenrod (Solidago gigantea) and Canada goldenrod (Solidago canadensis) -- are easily recognized by their impressive heights and large feathery blooms. Tall goldenrod typically tolerates drier sites than Canada or giant goldenrod and is usually the species you'll see growing in abundance in fields and along roadsides across much of the country. All spread vigorously by rhizomes, but this one tends to be less assertive, making it a better choice for garden sites where it can be allowed to naturalize in all its golden glory. 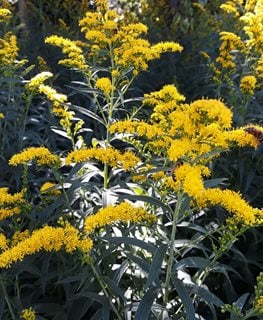 The name may not be glamorous, but what an apt description for a plant that will thrive in infertile soils where little else will grow, including dry open ground, rocky soil, and clay. One of the shortest native goldenrods, rarely rising past knee height, old field goldenrod is distinguished by bright-yellow flower heads located mainly on the top side of each gracefully arching panicle, perhaps so you can better enjoy the view from above. With a spreading growth habit, this plant is a great groundcover for rock gardens, meadow plantings, and dry, sunny garden beds.

There are many ways to use goldenrod plants:

RELATED:
Flowering Plants for the Fall Garden
The Best Perennials for Pollinators