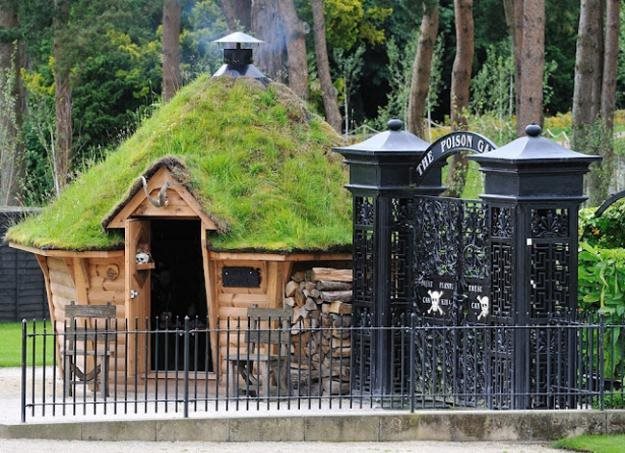 "I wondered why so many gardens around the world focused on the healing power of plants rather than their ability to kill. I felt that most children I knew would be more interested in hearing how a plant killed, how long it would take you to die if you ate it, and how gruesome and painful the death might be." -Duchess of Northumberland, on curating the Poison Garden at Alnwick Castle. 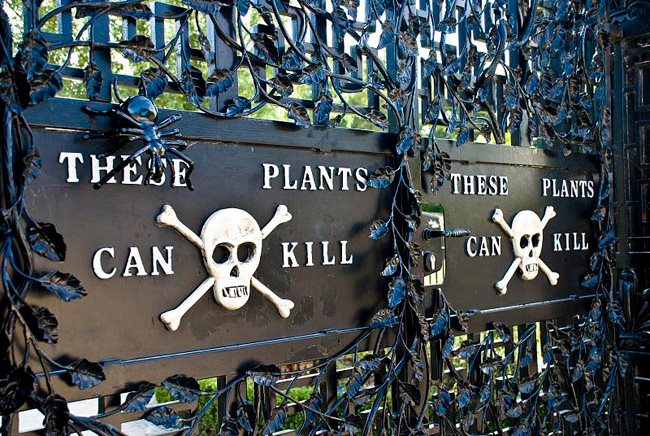 Castor bean (Ricinus communis) for kidney failure, laburnum (Laburnum spp) for comas & frothing at the mouth; Strychnine (Strychnos nux-vomica) will induce fatal convulsions, deadly nightshade (Atropa belladona) offers a prelude of hallucinations before paralysis. These are the sorts of plants you'll find at the Poison Garden at Alnwick Castle in northern England. Beyond big black gates that warn "These Plants May Kill" and a miasmatic fog, a collection of over 100 botanic assassins & intoxicants is introduced with an exhortation: "Do not touch any of the plants, don't even smell them."

Garden docents offer this warning while leading curious audiences through beds of the potent plants, which can be divided into roughly three categories. First, there are the narcotics: opium poppies (Papaver somniferum), cannabis, mushrooms, and tobacco. Second, the legendary, rarified killers: Henbane (Hyoscyamus nige), the deadly & psychoactive plant whose ancient use was documented by Pliny, Hemlock (Conium maculatum), a poison administered to condemned prisoners in Greece, including, most famously, Socrates; and mandrake (Mandragora officinarum), a hallucinogenic plant immortalized by St Thomas Aquinas, Machiavelli, Shakespeare, Ezra Pound, and J.K. Rowling (one Harry Potter book features a mandrake that screams, a habit commonly attributed to the bewitching root). These first two categories are perhaps not surprising-legendary, verboten, and exotic, they haunt fairy tales, myths, and addiction. However, the third group is shocking in its ubiquity: plants most likely to be in your own garden: foxgloves (Digitalis spp), a pretty flower that can be fatal if ingested; columbine (Aquilegia spp), whose seeds and roots contain cardiogenic toxins; wild clematis (Clematis vitalba), with its noxious ulcer-inducing sap. 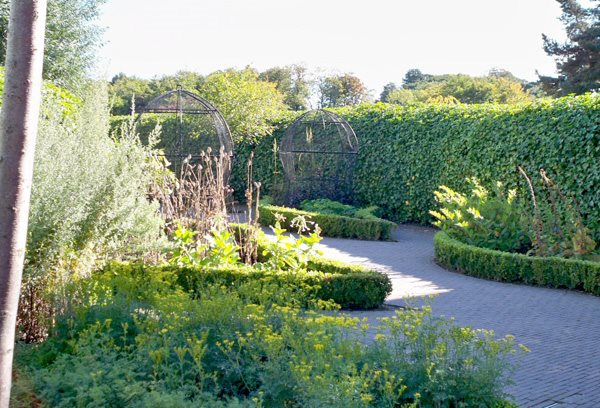 With all of its interior gardens, Alnwick Gardens has been called "The Versailles of the North," the most ambitious public gardens created in Europe since World War II. The story behind the garden is the stuff of fairy tales. 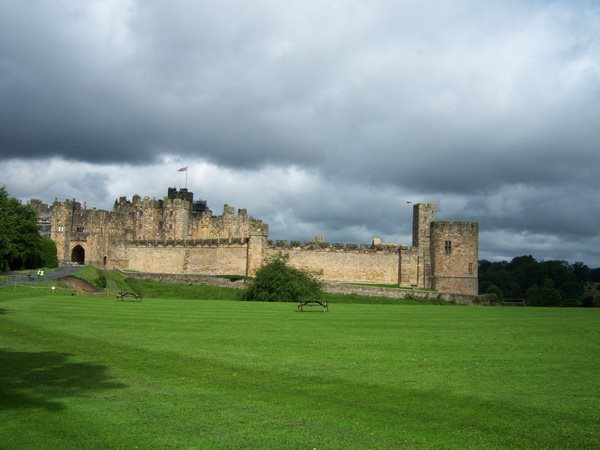 In 1995, an English woman and her husband suddenly inherited nobility, a castle, and 14 acres of gardens. The newly-titled Duchess of Northumberland began designing a series of modern gardens, including a bamboo labyrinth, a $7 million treehouse amid 17 lime trees, and a Serpent Garden with topiary and water sculptures. Many of her new landscapes were controversially modern, and the Poison Garden (also arguably maudlin) raised the most society eyebrows. While the Duchess was berated for eschewing tradition, she designed the Poison Garden with historic inspirations-the legendary garden in Padua, where the Medici family cultivated deaths of their enemies by way of botanic poisons, as well as the tradition of medieval apothecary gardens. In an interview with the Telegraph U.K., the Duchess discusses the casual uses of Angel's trumpet (Datura spp), a potent poison and aphrodesiac: "Victorian ladies used to sit around a table with a datura plant in the middle and play cards or have tea. They’d pop their cup under a bell, tap it, and pollen would fall into the cup. They would experience similar effects to that of LSD."

And beyond the deadly flower beds looms Alnwick Castle, a familiar image to Harry Potter enthusiasts-the Castle was cast as Hogwarths in the series' first two films.