Create the Illusion of Water with Plants

How to use grasses, trees, groundcovers and other plants to evoke water in a dry garden By Pam Penick

In the 1800s, American pioneers driving wagon trains west across the Great Plains glimpsed in the rolling, tall-grass prairie an echo of the ocean. Grasses evoke the movement of water so well that a horizon-wide view of them can make us feel as if we are at sea. Grasses aren’t the only plants, however, that suggest water. Many others share this quality, whether through cascading or fountain-like form, or through color that, when massed, brings to mind a river or pool, or even through an uncanny resemblance to undersea life like coral and seaweed.

Savvy, creative gardeners can use such plants in their water-saving gardens to create an illusion of watery abundance. Choosing dry-adapted plants to accomplish this sleight of hand makes the illusion even more satisfying. Here are some tricks to keep up your sleeve. 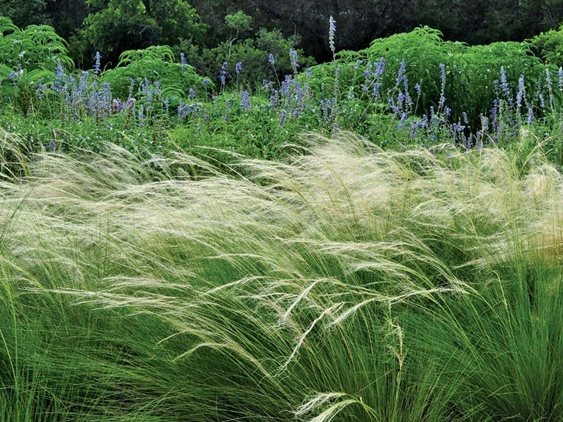 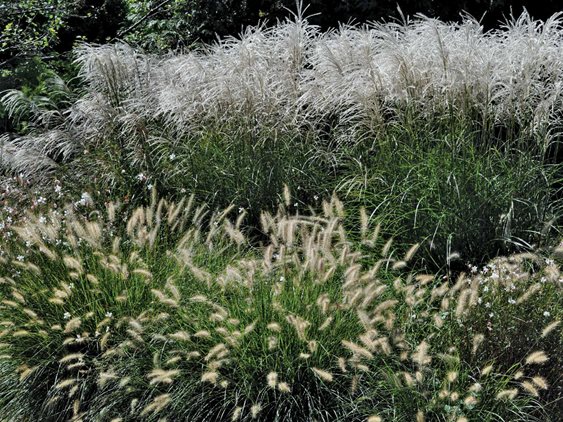 Turn On a Fountain of Arching Leaves 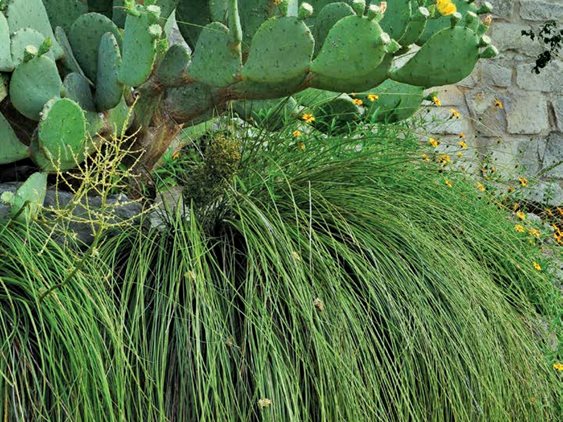 Spill a Waterfall of Foliage

Cascading plants create the illusion of a spilling waterfall, especially when planted atop walls, where their flowing habit can be shown off to greatest advantage. Choose creeping groundcovers like silver ponyfoot (Dichondra argentea); sprawling perennials like prostrate rosemary; and grassy clumpers like spaghetti-leaved Texas beargrass (Nolina texana). Many succulents, too, evoke falling water: the steady, moss-green drip of string-of-pearls (Senecio rowleyanus); the splashing effect of upturned leaves on string-of-fishhooks (Senecio radicans); and the rivulets of bottlebrush-textured burro’s tail sedum (Sedum morganianum). 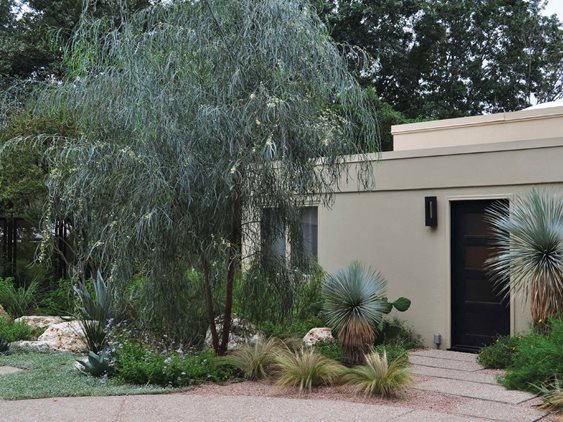 With pendant limbs, weeping trees bring to mind the water-loving weeping willow, which grows along streams and ponds. What a trick, then, to use that drooping form to fool the mind into imagining a nearby creek or pool in a dry garden! Try weeping acacia (Acacia pendula), a dry-garden doppelgänger of the weeping willow; weeping yaupon holly (Ilex vomitoria ‘Pendula’), whose stiffly draped, evergreen branches are bedecked with scarlet berries in winter; and weeping mulberry (Morus spp.), whose curtain-like branches sweep the ground. 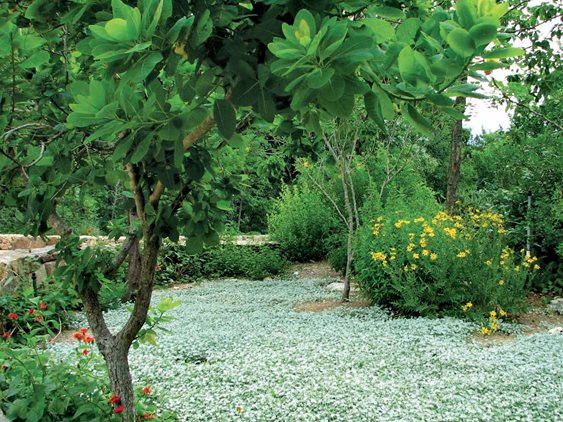 Dip into Leafy Pools and Streams

Mat-forming or creeping groundcovers with silver or blue-green foliage create the illusion of a limpid pool and make good lawn alternatives too. Try woolly stemodia (Stemodia lanata), with silvery green leaves; lamb’s ear (Stachys byzantina), with pettable, fuzzy foliage; and silver carpet (Dymondia margaretae), whose silvery white leaves lie flat on the ground. For a meandering stream, choose a long-blooming, small-to-medium-sized perennial with blue or purple flowers, and mass it by the dozens in a winding ribbon. Good candidates include blue false indigo (Baptisia australis), ‘May Night’ salvia, and lavender. 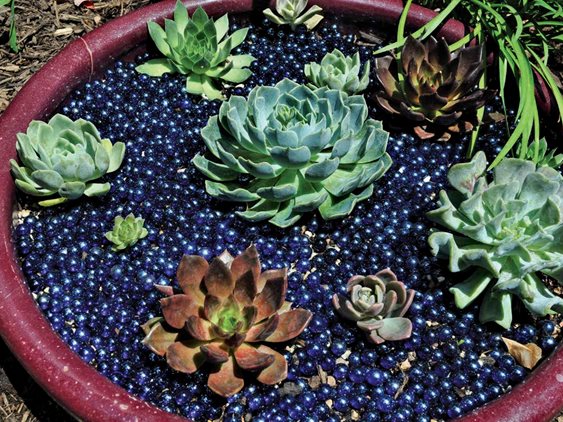 Massed in a rock garden, a colorful assortment of succulents can imitate an under-the-sea garden so convincingly that a clownfish might feel at home. This is a trick that only those in frost-free climates can pull off in in-ground gardens, but elsewhere you can use container plants and bring them indoors for winter. Look for clamshell-shaped paddle plant (Kalanchoe luciae); frilly echeverias, massed to resemble coral; many-armed squid and octopus agaves; and blue chalksticks (Senecio serpens) for soft-fingered anemones. Or make an ever-blooming, waterless lily pond by planting a bowl-shaped container with a handful of echeverias for the water lilies, mulched with blue glass for the water. 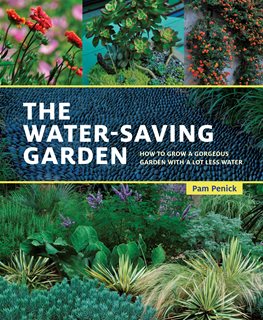