Make your plants healthier and more productive by mastering these four basic techniques. By Anne Balogh

Gardeners often prune their ornamental shrubs and perennials for the immediate satisfaction of improving the appearance of a straggly or overgrown plant. But pruning is important for purposes beyond aesthetics, and you shouldn’t always expect instant gratification from your efforts.

The Purpose of Pruning

Sometimes pruning involves shearing a plant down to the ground with the goal of encouraging new growth. It may be done to curb the spread of an overly assertive vine, or to thin out tangles of branches from a mature shrub. Or it may be as simple as pinching off the tips of a plant to stagger the bloom time and promote branching.

“To prune plants well is not so much about knowing how and where to cut but about knowing what you’re trying to achieve. Experienced gardeners are able to describe what a plant should look like when they’ve finished, even before they’ve taken their hand pruners out of their pocket,” says Steve Bradley, author of The Pruner's Bible.

Unlike the pruning of large trees, which often requires the skills of an arborist, the pruning of smaller shrubs and perennials is a job any gardener can tackle easily with a few basic tools. Knowing what you want to accomplish will determine not only the technique you use, but also the timing.

Use thinning cuts when you want to remove diseased or damaged branches or unwanted growth, such as in the center of a shrub that’s too dense. By culling out these surplus branches, you’ll expose the remaining branches to more air and sunlight and improve the plant’s structure and definition. 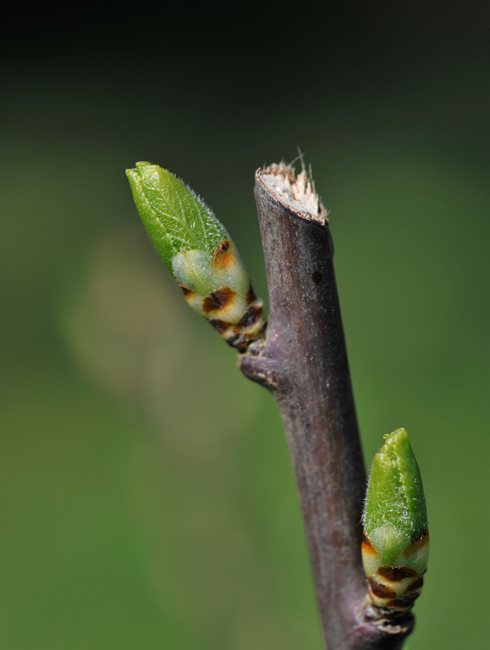 When pruning shrubs, always make your cuts just above a bud. For plants with buds arranged alternately (with one bud higher on one side than the other), make sloping cuts angled up from the bud. For plants with buds arranged directly opposite from one another, make a flat cut at a right angle to the stem just above a pair of buds. Photo by: Adrian Muttitt / Alamy Stock Photo.

When done properly, thinning will preserve the natural form of a plant rather than stimulate a new flush of growth. When making your cuts, remove the entire shoot or branch completely by cutting back to sound, healthy tissue, close to a branch node or bud. This will promote better healing of the cut surface. For thin stems and branches (up to ½ inch in diameter), you can easily cut through them with a hand pruner or small pruning knife. To make a clean cut without crushing or bruising the branch, use bypass pruners with overlapping blades rather than single-bladed anvil-type pruners. To cut through thicker branches, upgrade to a lopper (essentially a pruner with heavier blades and longer handles) or a pruning saw. You may also want to invest in a long-arm pruner (a 6- to 10-foot-long telescoping pole with a pruner at the tip) to remove high branches without standing on a ladder. For all your pruning jobs, use high-quality tools with clean, sharp blades (Felco is a reliable brand), and be sure to match the tool to the task at hand to avoid damage to both the branch and the tool.

Related: How to Care for Garden Tools

When to make thinning cuts:

The best time to thin a shrub is late fall to early spring. Branch removal will be less stressful to the plant when it’s dormant, and you’ll be able to see the structure of the branches more clearly, allowing you to identify damaged branches or areas that require thinning. To avoid overthinning, follow this advice from master gardener coordinator Sandra Mason, with University of Illinois Extension: Spray paint or tie a colorful ribbon around the branches you plan to remove to help you visualize what will be remaining.

Unlike thinning cuts, where the objective is to remove the branch entirely, heading cuts shorten branches or twigs to increase the density or bushiness of a plant and control its size and shape. When you shear a hedge, for example, you are essentially making hundreds of heading cuts. 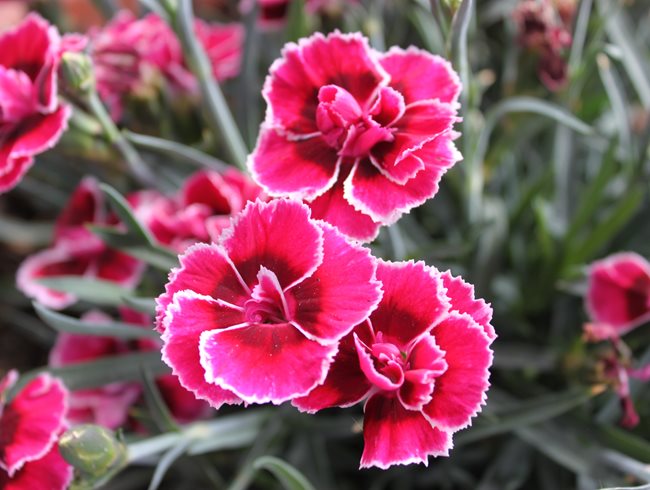 Give your dianthus and other spring-flowering perennials a mid-season boost by cutting them back after blooming to about half their size. This often promotes fresh new growth and sporadic reblooming.

There are two types of heading cuts: selective and nonselective. Selective cuts are made by cutting back a branch or twig close to a bud to reduce a shrub’s height while retaining its natural form. Nonselective heading cuts shorten the length of a branch by cutting it back to no place in particular. Because shearing stimulates dense growth at the ends of branches, it should be reserved for shrubs that can tolerate repeated grooming, such as boxwoods. “Shearing is a high-maintenance chore,” says Cass Turnbull, in her Guide to Pruning. “Although shearing a plant may take little time, the tidy appearance vanishes very quickly, and shearing locks the practitioner into frequent reshearing.”

Use hand pruners for selective heading, and hand shears, which have longer blades than pruners, for nonselective cuts. If you have rows of hedges that require shearing, consider investing in an electric or gas-powered hedge trimmer equipped with a lock button to prevent operation of the tool if you release the switch. When using shears to clip a hedge, follow this tip from Bradley: Always work upward from the bottom of the hedge to prevent the prunings from becoming entangled in the uncut branches. Also make the hedge wider at the bottom than the top to prevent the upper branches from shading the lower branches.

When to make heading cuts:

The timing of heading cuts varies depending on the plant species and your objectives. One of the most important rules of thumb is to prune spring-flowering shrubs, such as forsythia and lilacs, soon after they bloom because they develop their flower buds during the summer and fall of the previous year. If you prune them after early to midsummer, you risk removing most of the buds for the following season.

Summer and fall flowering shrubs give you a bit more flexibility because they bloom on new wood produced in the same season. To encourage new growth, and thus more flowers, prune them back in later winter or early spring before the leaves emerge. Hydrangeas have a variable set of rules, because the buds on some plants form on new wood and some on old wood. For guidance, see How to Prune Hydrangeas.

When clipping formal hedges, shear them after the first flush of new growth in the spring. To maintain their shape, you may need to shear them again during the growing season if they begin to look untidy. Avoid shearing in late fall because the new growth that follows may not have time to harden off before the first frost.

For herbaceous perennials, pruning is often accomplished by pinching off the tips and first set of leaves of a stem to stagger bloom time and control the plant’s height and shape. “Anyone who considers themselves so much as a weekend gardener knows the supposed attributes and glories of pinching mums. But very few gardeners take full advantage of this valuable technique, which can enhance the habit and flowering effect of innumerable other perennials,” says Tracy DiSabato-Aust, author of The Well-Tended Perennial Garden. Among the perennials on her recommended list for pinching are asters, joe-pye weed, beebalm, Russian sage, sedum 'Autumn Joy', phlox, turtlehead, and common yarrow. 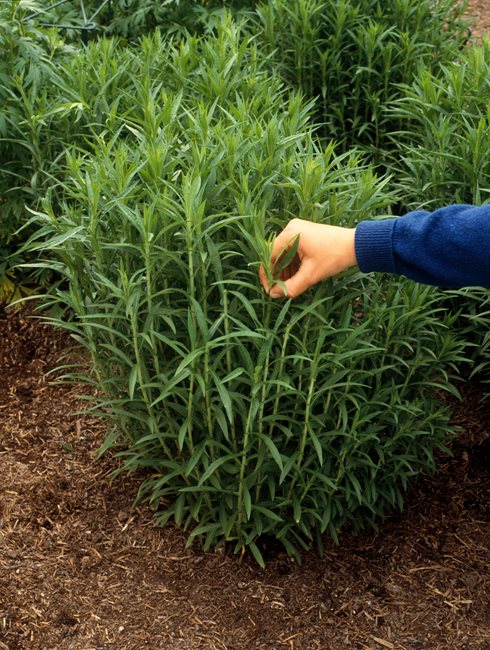 For fall-flowering perennials, such as asters and chrysanthemums, pinching them back selectively before they bloom will allow you to stagger or delay bloom time and give you a fuller, more compact plant. Photo by: Dorling Kindersley ltd / Alamy Stock Photo.

Most plant stems can be pinched with the tips of your fingers, but you can also use hand pruners or a pair of garden scissors. For the neatest appearance, it’s best to pinch the stem just above a leaf node. Do not pinch any perennials that form only a single flower bud or stalk, such as daylilies, hostas, astilbes, and coral bells.

The best time for pinching is generally early to mid-June, especially for fall-flowering perennials. If you wait until July, you may not give the plant enough time to form flower buds before the end of the season. If you are pinching solely for the purpose of shaping a plant, the timing isn’t as critical.

Most gardeners are familiar with deadheading, the process of snipping or shearing off withered flowers to channel the plant’s energy into new blooms and fresh foliage rather than seed creation. Although it can be a tedious and time-consuming task, deadheading will often coax repeat blooming from many perennials and annuals. It will also prevent plants that self-sow from developing seeds and strewing them haphazardly throughout your garden, if that’s not your intent. You may even want to deadhead perennials that only bloom once to improve the vigor of their foliage. Examples include hostas, daylilies, lungworts, and lady’s mantle.

Although it may be tempting to remove all the spent flowers in your garden to give it a tidier appearance, don’t deadhead your plants indiscriminately. Some single-blooming perennials are more attractive when the flowers are left to dry, such as alliums, astilbes, goat’s beard, and Russian sage. For other plants, you may want to allow seedheads to form because they provide winter interest and a food source for birds. For guidance, see this list from Penn State Extension Master Gardeners of perennials and annuals that do or do not benefit from deadheading.

With perennials that are vigorous bloomers, such as hardy geraniums, dianthus and coreopsis, an easy way to deadhead is to trim the plant back with shears to about half its height. With plants that don’t bloom as profusely, you can use scissors, hand pruners, or even your fingertips to do the job, cutting back to a bud or leaf node. For flowers with leafless stems, such as hostas, cut them down to the base and remove the entire stem.

To redirect a plant’s energy into new growth, it’s best to remove faded flowers as soon as you notice them. But if you find it hard to keep up with the chore, just deadhead when time allows. The delay will do little harm, and it may even work in your favor by extending the reblooming period. 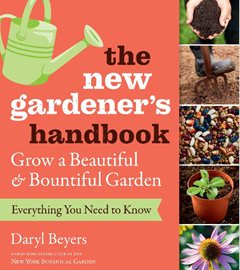 If you're not sure where to start, the Garden Design editors recommend The New Gardener's Handbook: Everything You Need to Know to Grow a Beautiful and Bountiful Garden, by Daryl Beyers, an expert from the New York Botanical Garden. You'll find easy-to-follow information on: