A Tropical Garden in Los Angeles

A Los Angeles couple takes a surprising approach to designing their new home. By Jeff Spurrier

When Jordan Kaplan sat down for his first meeting with Grant Kirkpatrick and Damon Hein of the architecture and landscape design firm KAA Design, he gave them one mandate for the gardens he wanted to build around his new home in Los Angeles’ Pacific Palisades. “To give you an idea where my focus is,” he said, “I want the landscape to have as much importance and value as the house.” 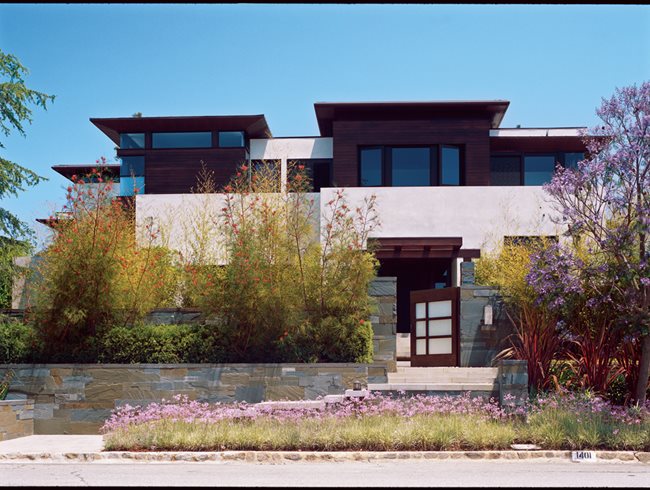 A street view of the house, where a sea of Tulbaghia violacea awaits visitors. Bluestone retaining wall planters hold tall, wispy Grevillea ‘Long John,’ at right, and on the opposite side of the limestone steps are phormium and blooming jacaranda. Photo by: Tim Street-Porter.

It was an unusual statement in this age of house-centric design, especially coming from a homeowner who works in real estate. For Kaplan, who specializes in commercial and multifamily properties, familiarity with the market is precisely what made him want to focus on landscape. “I didn’t want one of those properties where the house is giant and the yard is little,” he says. “I wanted them to be in proportion to each other.”

When he bought the parcel in the hills above Sunset Boulevard a decade ago, a curving driveway cut through a lawn to reach a California ranch house set into the rear of the property. Kaplan decided to start from scratch by tearing down the ranch. The new house, a two-story modernist structure, sits close to the street and has lines that draw the eye to a central atrium and then out to a series of distinct outdoor spaces beyond. The building itself is full of familiar California touches: crisp lines, walnut floors, and mahogany trim, but any sense of the expected disappears at the garden.

The surprises begin outside the entryway, framed in bamboo and ficus, where a bridge spans a rock garden comprised of pebbles and five granite boulders, meant to evoke the five Confucian virtues. To the east, the ficus continues around the perimeter of the curved yard, hiding the street beyond. Layers of big-leaf tropical plants and gingers blur this living boundary line. 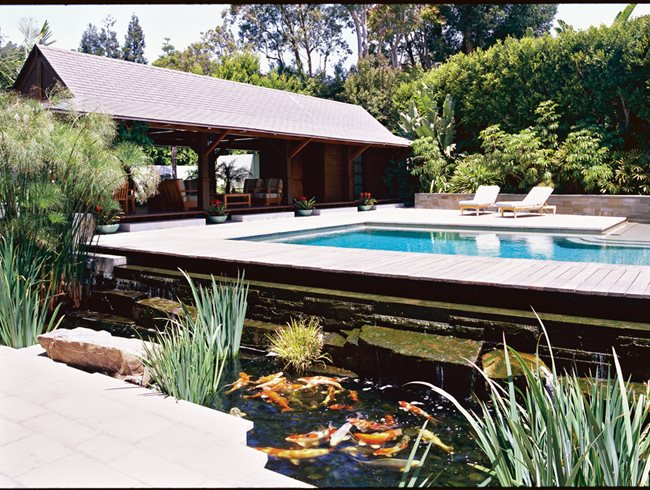 A tall cluster of tufted papyrus adds drama to the koi pond, which runs parallel to the ipe pool deck. On the far side of the pool, two Sutherland chaises are covered in Perennials outdoor fabric and set against a backdrop of giant birds of paradise, tibouchina, and several types of palms. Photo by: Tim Street-Porter.

A lawn wraps around one side of the house, dotted with paradise palms and bluestone benches, and is almost parklike in feel. It’s intended for heavy use—there’s a trampoline for Kaplan’s and his wife’s three children, and a temporary floor is often laid over the grass for parties.

Beyond the lawn, on a direct line from the front entry, the wet garden begins: a pool, waterfall, and koi pond are bookended by twin stands of papyrus. A Southeast Asian lanai stands adjacent to the pool, creating a seamless transition from outdoor to indoor spaces. At one end of the lanai, a giant Burmese honeysuckle vine climbs into the eaves with abandon.

The burble of the koi pond waterfall is a stark contrast to the Ryoan-ji-style Zen rock garden at the entry that has a symbolic seascape drawn in gravel. But for Hein, there is a clear connection between the two landscapes. “There is an axis going through the front door and the gardens out back that ties it together,” he says. “Elements repeat at either end of the axis. [At the pool] there is real water as opposed to the idea of water found in front of the house.”

A second axis crosses in the house from the east side lawn to a semi-enclosed jewel box garden to the west of the formal dining area. Where the lawn is both expansive and wild, hinting at jungle, this small treasure is a study in spare composition. Against one wall it has a soft waterfall, against another, a Japanese maple. Below the tree lies a three-ton piece of volcanic schist, split in half to expose a vein of yellow-white quartz.

The house was designed with a sense of flow, says Hein, KAA’s former landscape director who now runs his own firm. “It’s not a building and a garden,” he says. “We minimized any distinction between the two.”

Kaplan’s affection for tropical environments and Asian design stems from visits to the Far East when he was a graduate student and in years since when he shuttled between Los Angeles and Asia for business. He often combined work trips with family vacations in Hawaii, frequently at the Four Seasons Hualalai resort on the Big Island’s North Kona coast.

KAA paid homage to those sensibilities by bringing in Plumeria ‘Candy Stripe,’ terrestrial orchids, palms, giant birds of paradise, jasmine, and philodendron, among others. The evergreen wall around the lawn is dotted throughout the year with color when the gingers bloom—the heady perfume of kahili ginger (Hedychium gardnerianum), delicate pink buds of shell ginger (Alpinia zerumbet), along with the meaty, multicolor lobster claw (Heliconia schiedeana). In late spring, the jacaranda (mimosifolia) explodes in lavender, while even late in August the pink trumpet tree (Tabebuia impetiginosa) holds onto its flowers. At the eastern corner of the lot, the gnarled trunk of a mature peppermint tree (Agonis flexuosa) offers a kid-friendly climbing perch. 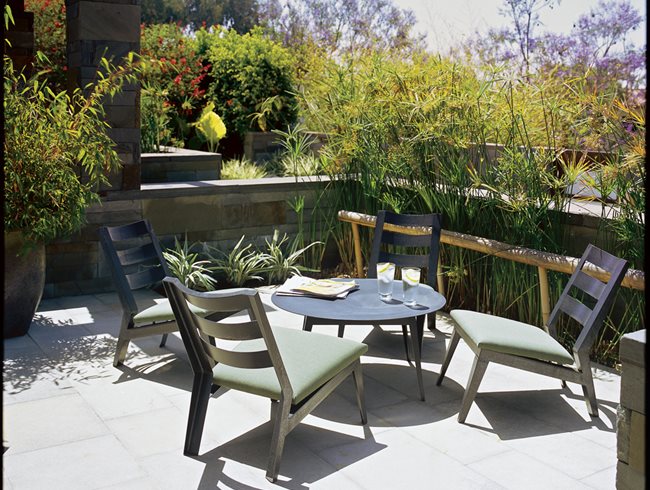 The garden’s most distinctive theme is the use of rock—sometimes as an art piece, as in the jewel box garden, and sometimes as a child’s play area, the perfect topography for Tonka toys. An appreciation for the mineral world is a passion Kaplan developed as a child growing up in nicely landscaped tract housing in the San Fernando Valley. His father, UCLA philosophy professor David Kaplan, took him out to the Big Tujunga Wash in the foothills of the Valley. Using pry bars made of scavenged truck axles, they dislodged huge stones to bring home to the family garden.

For this landscape, Kaplan and members of the design team made several trips to the Mojave Desert, roaming remote quarries off Highway 395, looking for just the right rocks to truck in. “The Pacific island theme was supposed to apply to the garden,” says Kaplan. “But we are in California, and I liked the boulders.” The selections were pulled out, tagged, cleaned up, sometimes smoothed slightly, and craned in to carefully selected spots.

Kirkpatrick, a principal and founder at KAA, went along on one of the dawn patrol trips to the desert. “Choosing the rocks was as important as choosing the plants,” he recalls, “maybe more.”

Mineral materials show up throughout the garden and the house as limestone in patios and stairs and Pennsylvania bluestone almost everywhere else—in curving benches, interior and exterior walls, and fireplaces.

Maintaining a tropical garden in Los Angeles can be tricky, especially close to such a large lawn. Some of the tropicals are understory material, doing well in the shade but the water has to be carefully monitored. Out front the bamboo has grown almost into a living genkan, a green entryway, yet in the process has managed to escape its cement enclosures.

Even with maintenance challenges, Kaplan says he’s delighted. For KAA, Kaplan was one of those rare clients whose priorities were outside in. “So often the landscape is left until afterward, and then the homeowner wants to run to Home Depot for plants,” says Kirkpatrick. “Jordan gets landscape architecture.”

This article originally appeared as "Breaking the Rules" in GARDEN DESIGN's April 2012 issue.