Making the Most of a Lot

For this San Diego family, a small property proved to have unlimited possibilities By Susan Heeger; Photography by Jack Coyier

Some five blocks from the coast in Del Mar, California, in a neighborhood of funky beach shacks and modern monoliths, lots are cramped and seclusion is at a premium. But the sun shines all year and the sea breeze moderates the heat, so outside is the place to be, especially for an active family. Which is why, when Mickey and Lisa Morera decided to redo their shack (Mickey’s onetime bachelor pad), they pictured an open-plan house enclosed by a sheltering garden. “Homes here are on top of each other,” observes Mickey, a commercial real estate broker who bought the original 1940s cottage in 1997 and married Lisa, a biochemist (now stay-at-home mom), five years later. “We like our neighbors, but we needed privacy.” 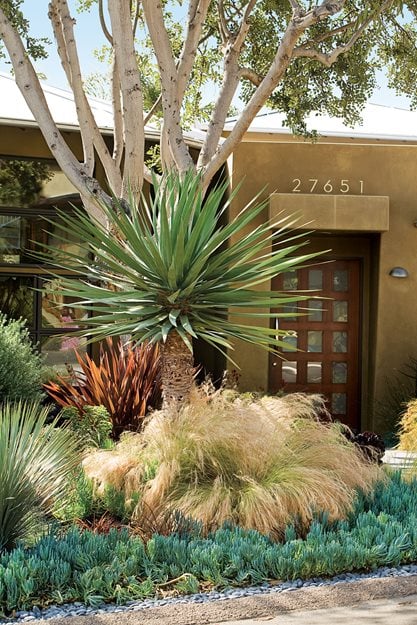 Having admired a friend’s house nearby, they hired his architect, Kevin Farrell, to rethink theirs. Farrell took their concept and ran with it, nixing the shack altogether for a California-contemporary house designed around a private courtyard, with outdoor living spaces front and back. At the earliest stage — before the foundation was even poured — garden designer Debora Carl entered the picture, ensuring that house and garden evolved as matching parts of a happy whole. 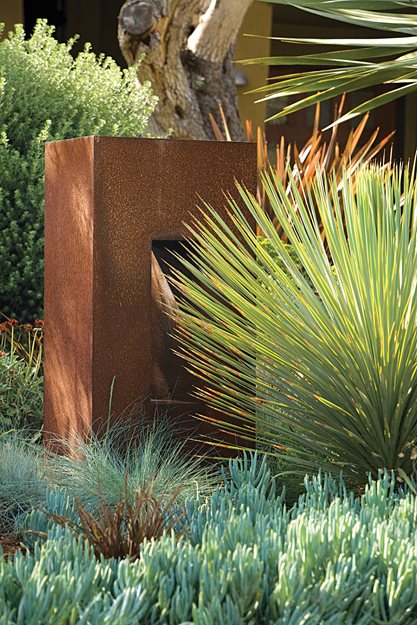 For structural interest, Carl turned a simple metal container into a sculpture.

The house itself has smooth stucco walls with stacked-stone accents, concrete floors and a spirit, says Lisa, “somewhere between craftsman, modern and beach casual.” Most of its rooms open on adjoining gardens that mirror or complete them: The indoor kitchen overlooks the dining courtyard with its complementary open-air kitchen, barbecue and fireplace. The street-facing living room is sheltered by a planted berm, which creates a backdrop for a hidden meadow and seating spot. The glass doors of the indoor dining room open to an alfresco lounge complete with fire pit, rustling palms and water spilling into a spa. Even with neighbors all around, the garden feels private thanks to well-placed hedges and the orientation of the outdoor rooms, which relate to the house, not the world at large. 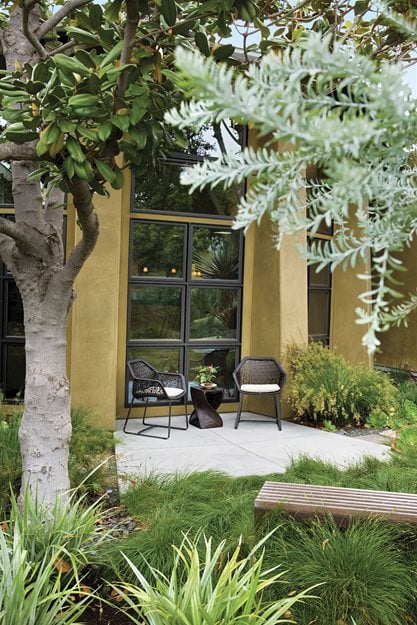 The private front patio, sheltered from the street by the grassy berm and the silver boughs of an acacia, is furnished for year-round use with synthetic rattan armchairs. 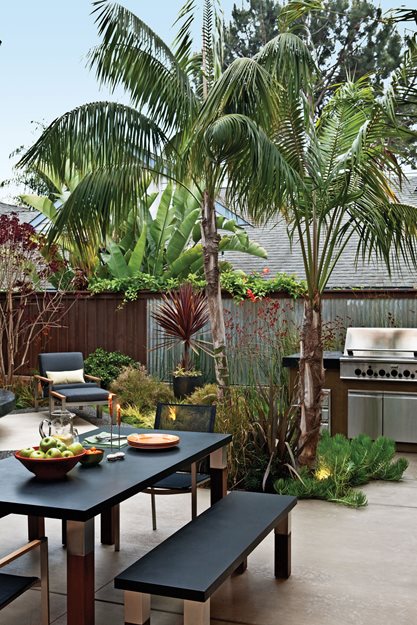 Mickey asked for an outdoor kitchen, where he could grill in the courtyard adjacent to the indoor kitchen. The Kenji dining table and benches are a green product crafted of paper-based material and cellulose fibers infused with resin.

Even in areas where paving rules (e.g., the dining courtyard), Carl softened the corners with planted cutouts full of kentia palms, red fountain grass and asparagus ferns. In the back, where the lot is shadiest, she balanced stone terraces and the spa with deep borders of more kentia palms and ferns, sparked by burnished-red ti plant and red-flowering Grevillea. Though a lap pool was once planned for this spot, along came baby Carmen, now age 2, so a spa and sandbox seemed like better options. 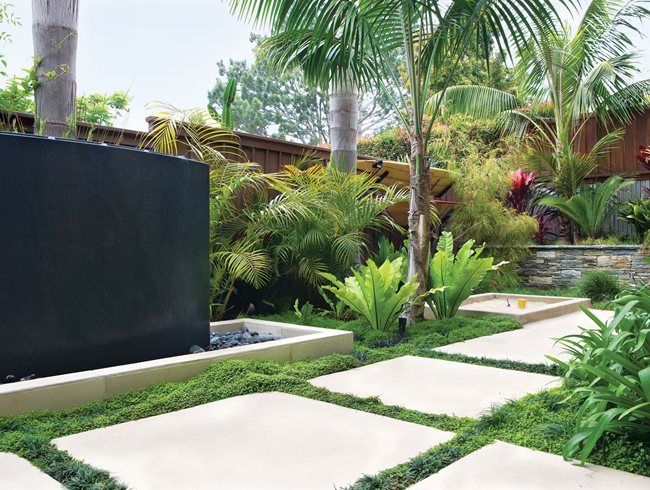 Nearby, the sound of water sluicing down a curved granite wall strikes a cooling note. Leading past the fountain, concrete pavers were interplanted with dwarf mondo grass, now joined by baby’s tears. To the right, a toddler-friendly sandbox, where Carmen holds play dates, is nestled among bird’s-nest ferns and kentia palms. A rack on the adjacent fence turns surfoards into outdoor ornament.

“She’s learning to swim in the spa,” says Lisa. “Her friends come to play, and there’s room for tricycles and our dog to run around, and for us and our friends to relax by the fire pit after dinner.” So much for the beachside squeeze.

“There’s a seamless flow between indoors and out,” says Carl, who attributes this to a close collaboration among clients, architect, garden maker and builder Bruno Buchler. The team made key decisions on colors and materials, and each choice led to others. One early call, for example, was the “worn-leather” hue of the home’s poured-concrete floors. This helped determine the rich chocolate color of the exterior stucco which, in turn, inspired many of Carl’s plant picks in a harmonious range of bronzes, burgundies and mixed green tones. 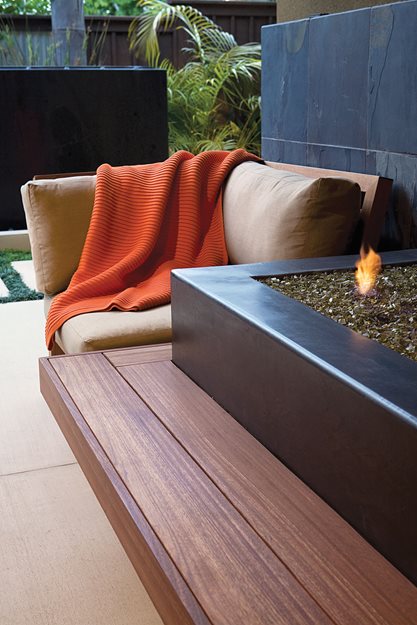 Outside the home’s dining room, a concrete fire element with an ipe bench takes the chill off cool nights while the nearby fountain adds its soothing soundtrack.

Indoor architectural details, such as inlaid floor “carpets” of pebble aggregate, honed black-granite counters and stacked Apache Cloud fireplace stone, made their way into Carl’s landscape too, reappearing in patios and around the barbecue, fire elements and doors. Of course, the garden also shows up prominently inside, in the form of leafy views through every window. “Our concept,” Carl explains, “was to erase hard divisions between being in the house or out to create one unified, self-contained space.” 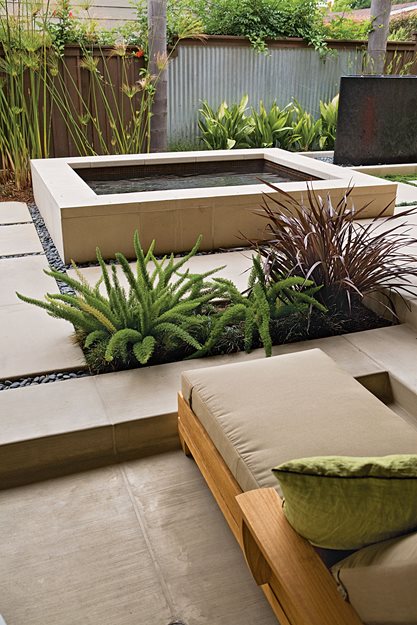 Near the spa, colored concrete pavers (poured in place), planted with asparagus fern and dwarf New Zealand flax, bring the garden closer to the lounging patio.

When Mickey bought the former clapboard cottage, it sat indifferently in its setting, a pair of scrappy lawns, with two trees (a magnolia and a carob) in the front yard and a row of queen palms in the back. As the new house took shape, the Moreras focused their landscape goals. “Besides screening from the street, we wanted to enter the house through a garden,” Mickey recalls. “We like the desert, but we wanted a slightly lusher, more dynamic look, but still low-maintenance. And we wanted the sound of water and the warmth of fire to take the chill off nights.” 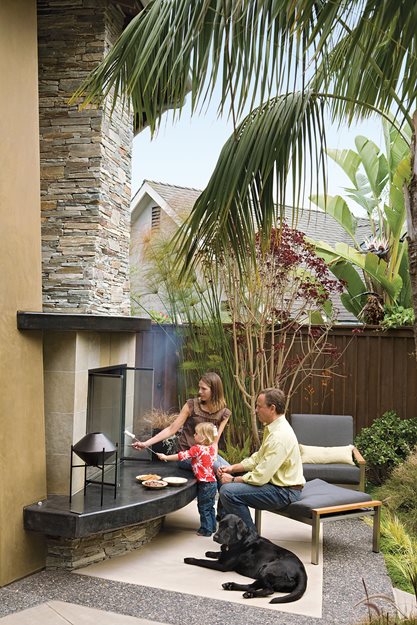 A fireplace of Apache Cloud legerstone and slate provides a stage for Lisa, Carmen and Mickey to make s’mores as their dog, Sugar, relaxes.

Carl and her clients preserved the trees, not just for screening and shade but also to give the new house and gardens a sense of age. For privacy from the street, she graded the front flat with the 2-foot bermed edge, and she topped that with plants that shine against the deep-brown stucco house and thrive in California’s climate. Since the front garden has the lot’s best light, she planted sun-loving, drought-tolerant Australian and South African natives: coast rosemary, New Zealand flax ‘Dark Delight’, Senecio mandraliscae and ‘Orange Cross’ kangaroo paws. To evoke a beach-close dune, she planted grasses that toss in the breeze: blue fescue grass and Mexican feather grass*.

* Note:
Mexican feather grass has the potential to be invasive in many areas of California—plant with caution.

Here are a few alternatives, suggested by PlantRight: