In South Africa's Cape Town, a spectacular botanical garden with rare and indigenous plants blooms against the backdrop of Table Mountain. 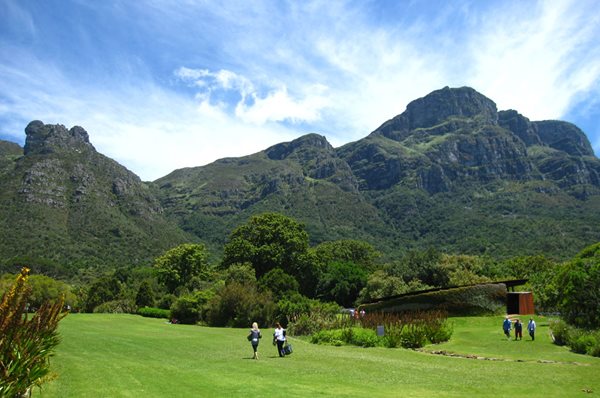 South Africa’s famous National Botanic Garden Kirstenbosch is known as the most beautiful garden in Africa. Its diverse collection of plants and amazing location make it one of the most stunning gardens in the world.

The garden is situated on the imposing eastern slopes of Table Mountain, the iconic mass that defines Cape Town and its mountainous peninsula. Castle Rock and Fern Buttress’s green cliffs tower above the sloping lawns of the garden (left) and far, far below, lie the Cape Flats, running all the way to the distant Hottentots Holland Mountains on the horizon.

Kirstenbosch's name, which means Kirsten's forest, was first documented in 1795. In 1902, the land was bequeathed by Cecil John Rhodes to the South African government. In 1911, Harold Pearson, a botany professor at the South African College, fell in love with the site and transformed it into South Africa's first botanic garden, with the garden's board holding its first meeting on June 16th, 1913. 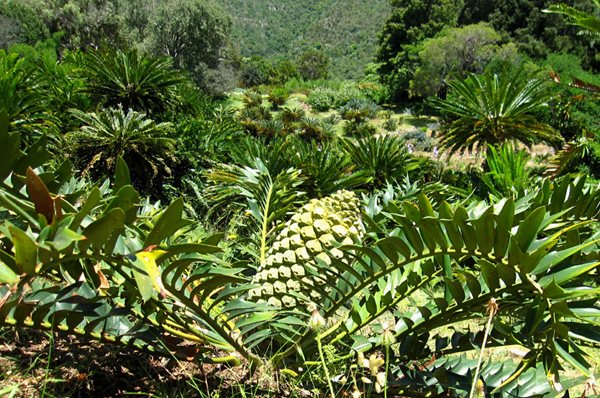 Managed by the South African National Biodiversity Institute, Kirstenbosch became the first botanic garden in the world to devote itself to indigenous plants in 1913 and is located in the heart of the Cape Floral Region, which was declared a World Heritage Site in 2004.

The garden was built with massive stonework, using local Table Mountain sandstone to tame the slopes of the mountain. Areas were carved out of the large property to feature different types of plants, including the Cycad Ampitheatre (left), which is filled with cycads, some of the oldest surviving seed plants in the world. 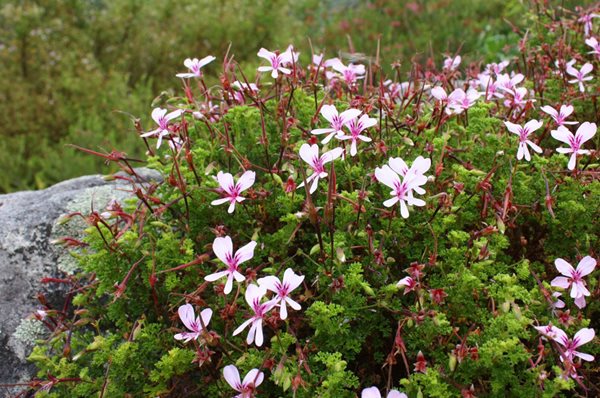 The Pelargonium Garden is situated on a koppie (rocky outcrop) where steep stone paths lead into an elevated collection of Pelargoniums, one of the world’s most well-known garden plants (commonly called scented geraniums). These Pelargoniums will bloom from late winter well into summer in South Africa.

The plants reward close inspection. Brushing past Pelargoniun citronella on a hot summer day releases its citrus scent into the warm air, while the delicately marked, pale pink flowers and bright, frilly green leaves of Pelargonium fruticosum (left) need to be appreciated up close. Pelargonium peltatum, ivy-leafed pelargonium, parent of the trailing geranium hybrids we know so well in our gardens, is here, and so is Pelargonium cucullatum, one of the easiest plants to identify on the Cape Peninsula, with its distinctive lilac flowers and cupped leaves, standing more than three feet tall. 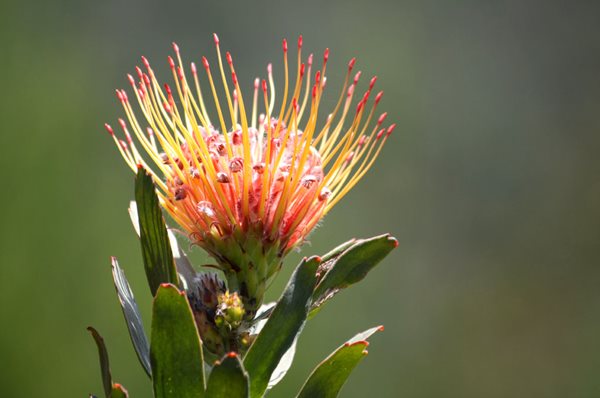 The higher reaches of the garden blend almost seamlessly, via the Fynbos Walk, into the wilds of the protected mountain slopes above.  Indigenous Proteas, Ericas, and buchus (a colloquial name describing small, highly aromatic shrubs with confetti-like flowers, from the Rutaceae family), and Restios appear first in distinct collections on upper and lower slopes, before occurring naturally as the orderly stone-edged paths give way to more strenuous trails that lead through the fynbos (pronounced fain-boss and meaning "fine bush") all the way up the mountain, right up to where, in late summer, Disas dip their orchid-feet delicately into clean, clear mountain water, tinted like pale tea from root-tannins.

The Fynbos Walk is at its best from winter to spring—the cool, rainy season interspersed by days of startling, clear blue—when the Proteas, Leucadendrons and Serrurias are in bloom. Pincushions (Leucospermum) flower from late winter to early summer (left). 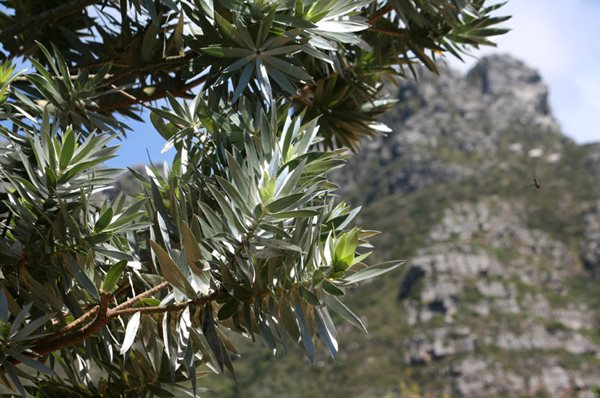 I was given a leaf of silver when I was a little girl, visiting Cape Town for the first time. It was a real leaf—soft, shiny, with tiny shimmering hairs. It came from the silver tree, Leucadendron argenteum, which must be one of the most beautiful plants in the world.   It is a protea, but it behaves like a tree, growing up to 30 feet tall. The slopes of Lion’s Head in Cape Town glitter with them in the setting sun.

Silver trees were used as firewood in the 17th and 18th centuries and were cultivated for this purpose. It is possible that the trees on the eastern slopes of Table Mountain represent the only remaining natural occurrence of silver trees on the Cape Peninsula, to which they are endemic.

Too few fires in protected areas and too frequent fires in unprotected areas have made the silver tree an endangered species. While fire kills the tree, the seeds are protected by their cones and can only be dispersed en masse after a fire. In addition, gray squirrels (introduced to the Cape by Cecil John Rhodes) decimate its seeds, exotic alien plants compete with it, and urban sprawl nibbles at what is left. 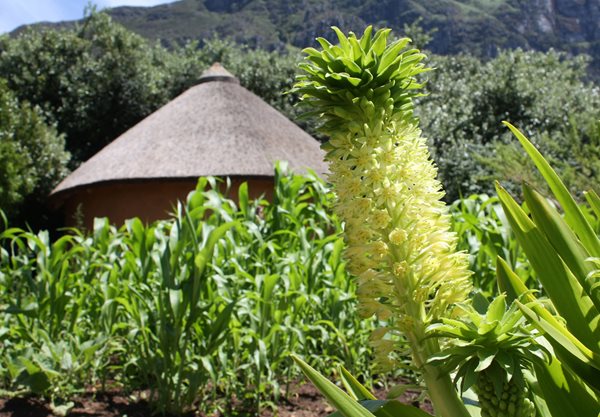 One of the newer additions to Kirstenbosch is the Useful Plants Garden, which teaches visitors about the cultural heritage of indigenous plants. The thatch-roofed Xhosa hut at the head of the garden exhibits various products made from the indigenous plants that have been traditionally used in southern African herbal medicine, crafts, and cuisine.

The striking Pineapple lily, Eucomis autumnalis, (left) is used medicinally, though its root is poisonous. Back pain, colic and urinary disease are just a handful of the many ailments that it is used to treat. Traditional African herbal medicine is still employed throughout South Africa and this part of the garden is a wonderful introduction to its history. 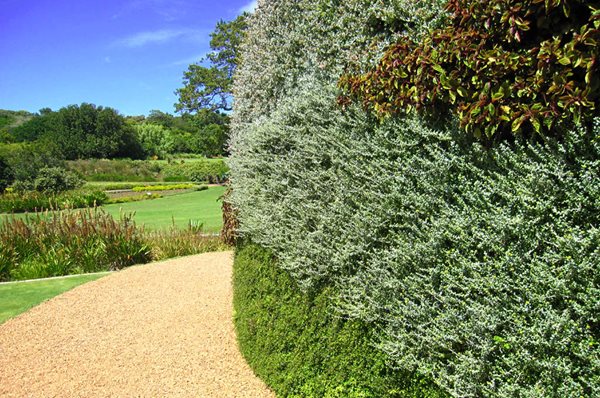 The "UNTAMED" exhibit, which will run until July 2011, is a collaborative exhibition between sculptor Dylan Lewis, architect Enrico Daffonchio, writer Ian McCallum, and the Kirstenbosch horticultural team. "UNTAMED" has a soft living wall coiled around rigid steel, (left) which encloses the exhibit inside. 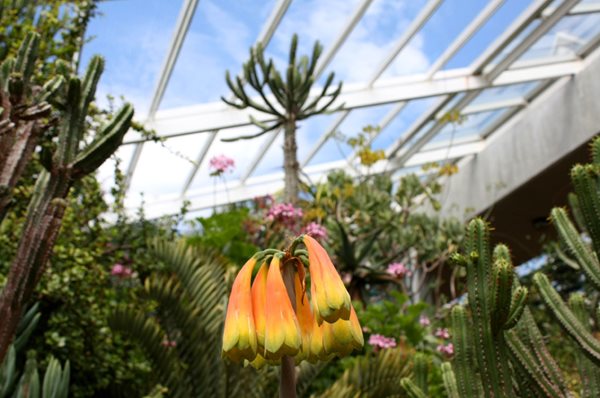 The Botanical Society Conservatory at Kirstenbosch, completed in 1997, was built to house a collection of southern African succulents. Kirstenbosch is located in one of the highest rainfall areas in South Africa and the Conservatory was designed to keep the plants dry, unlike most greenhouses, which are designed to keep plants warm. Each bed in the main house represents an ecological region in southern Africa, compressing an entire subcontinent of plants under one roof.

The Conservatory uses natural pest control to protect the Conservatory's plants. Special gecko hides on the walls house Marbled Leaf–toed geckos who eat the tiger moths whose larvae prey on succulents. Skinks (a type of lizard), Cape chameleons, slug eaters (a type of snake), and praying mantis complete the "Big Five" that keep the Conservatory pest-free. 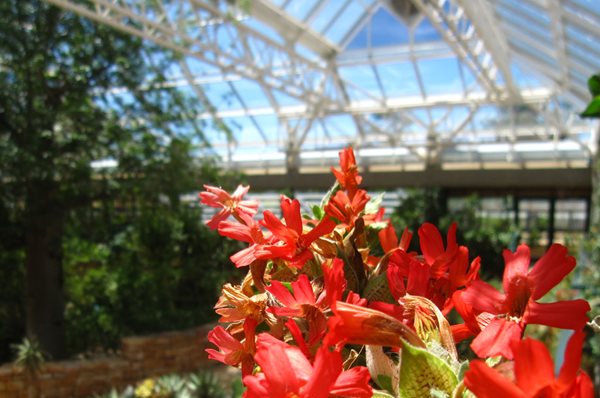 The scarlet-flowered shrub Petalidium coccineum (left) is a focal point along the edge of the Conservatory. It occurs naturally in northwestern Namibia, Owamboland, and the Kaokoveld and it flowers after rain, which is usually very rare in these desert areas. Moisture is also required for the seeds to be released, which explode from the stout capsules after a rainfall.

Ernst van Jaarsveld, the manager of the Conservatory, who collected the cuttings from which these specimens were grown, recommends that Petalidium coccineum be grown in containers that are very well drained and in full sun. Outdoors, it requires a subtropical but dry climate, such as Arizona. It does not tolerate cold or frost well, so it should be moved indoors in the winter or kept as a house plant. The plants at Kirstenbosch flower throughout the year, peaking in the summer. 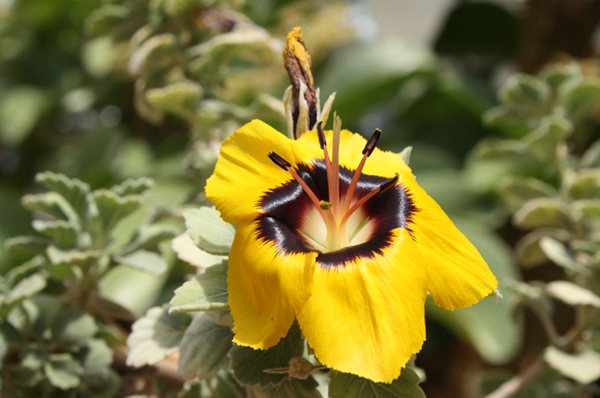 Kirstenbosch—with its extensive gardens and plant collection—gives visitors the chance to experience the rich and incredibly diverse botanical treasures of southern Africa, without ever leaving the garden grounds. Visitors can picnic on the green lawns overlooking Cape Town, sit beside Colonel Bird’s Bath where spring water bubbles from the shaded earth, or scramble up the higher paths as guinea fowls and francolins trot among the plants. If your travels bring you to South Africa, Kirstenbosch is a must-visit stop for any garden lover.

Special thanks to author and plantsman Ernst van Jaarsveld for his time and expertise.

Marie Viljoen writes the blog 66 Square Feet, where she blogs about gardening on her tiny terrace.