The Gardens of Philadelphia's Rodin Museum

Philadelphia's Rodin Museum sits on the city's Benjamin Franklin Parkway and just unveiled a massive renovation of its gardens by the landscape firm Olin. We take a tour of the newly renovated gardens. 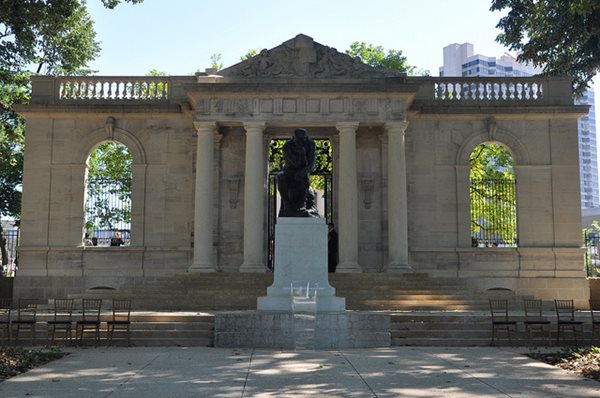 A couple of weeks ago, on Bastille Day, July 14, I was invited to visit the unveiling of the garden renovation at Philadelphia's Rodin Museum, conceived and overseen by the landscape firm Olin. The date was fitting for the event, as both the Rodin Museum and the Benjamin Franklin Parkway, on which the museum is located, were both inspired by French antecedents.

Mastbaum was a great admirer of Auguste Rodin and of Rodin's home in Meudon, where Rodin displayed a limestone gateway that he had bought from the 18th-century Chateau d'Issy.

Here, at the entrance to the museum, a cast of Rodin's "The Thinker" sits in front of a reproduction of the Meudon Gate, designed by Gréber and Cret, and which was repointed, cleaned, and restored as part of the renovation. 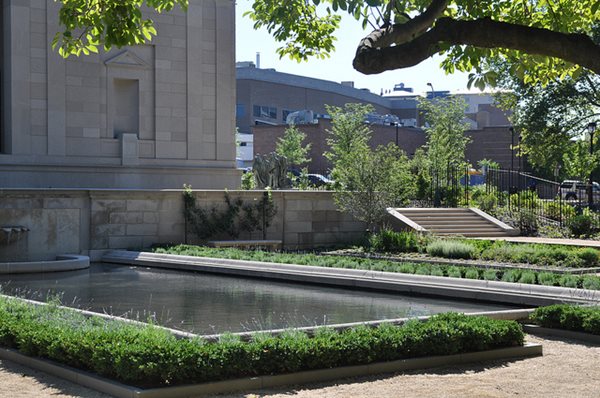 Olin drew upon the original plans of Cret and Gréber for the garden's renovation, keeping the formal style and layout of the original plan. Susan K. Weiler, one of eleven Olin partners who worked on the garden, mentioned the importance of designing the garden to emphasize movement: "It's all about movement through the entire space: up the stairs, through the gate, into the courtyard, up to the museum. Visitors can take in everything from the east and west gardens to the stairs up to the parapet."

Here, inside the interior courtyard garden, the grounds were regraded—matching, after the renovation, the exact heights specified in the original plans—the bluestone and limestone paving were all replaced, and many of the shrubs and trees were removed. 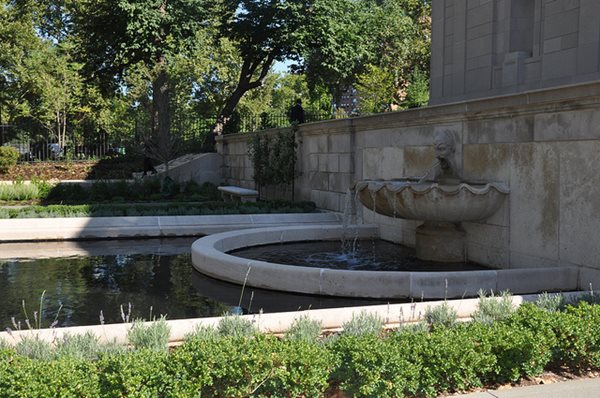 The reflecting pool was repaired and restored and new perennial beds were planted. Gréber's original plans did not specify what types of perennials to plant in the courtyard, and Olin chose to plant a variety of plants that will create a variety of seasonal foliage and fragrances, including the lavender that lines the edge of the reflecting pool.

Espaliered pear trees also grow against the wall, next to the fountain, with some pears almost ripe and ready to pick. 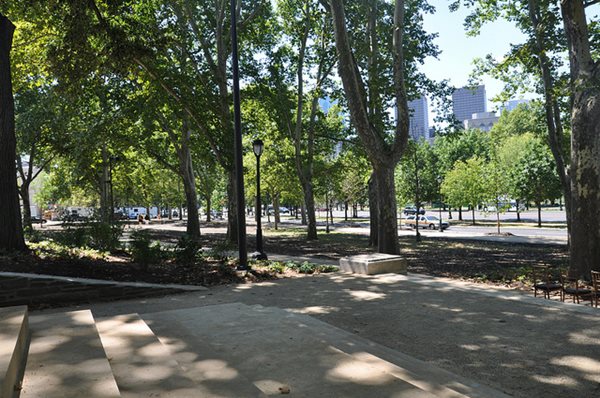 Philadelphia's Rodin Museum is on the Benjamin Franklin Parkway, which serves as a museum mile for Philadelphia. The Parkway was designed by Jacques Gréber, the same landscape designer who designed the original plan for the Rodin Museum's gardens. Born in Paris, Gréber modeled the Parkway after the Champs-Élysées in his native city, starting the boulevard from Philadelphia's City Hall and ending at the Philadelphia Museum of Art.

Prior to the renovation, several people mentioned to me that the Parkway had become so densely overgrown with trees in front of the Rodin Museum that many people did not even know that the museum was there. Olin's hope is that the museum's garden, nestled within the new landscaping of the surrounding areas and the Parkway itself, will create a focal point for the eye as Philadelphians walk or drive by the Rodin Museum.

The trees in the gardens—including those outside the courtyard, which border the Parkway and the sidewalk—were assessed by the Morris Arboretum of the University of Pennsylvania and any unhealthy trees were removed. The entire five acres of gardens had new plantings of native species (including those specified in the museum's original landscape design) put in, including a mix of trees and shrubs including winter-blooming witch hazel, virburnum, fragrant sumac, bush honeysuckle, fothergilla, and American beautyberry. 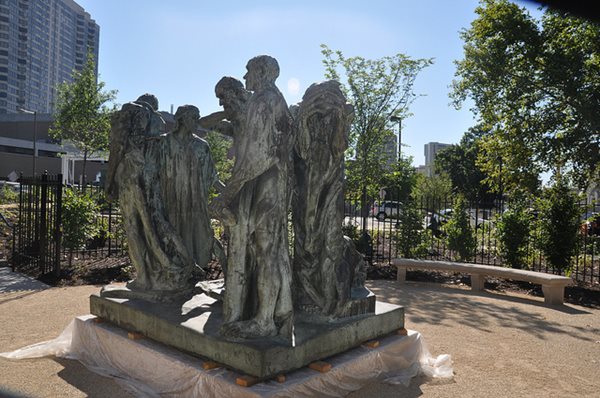 A cast of Rodin's famous "The Burghers of Calais" was always meant to be displayed in the Rodin Museum's gardens, but it was moved in 1955 to the Philadelphia Museum of Art. The new renovation places the sculpture back in the museum's east garden, as well as placing "The Age of Bronze" and "Eve" in the museum's façade, where they were originally meant to be seen. 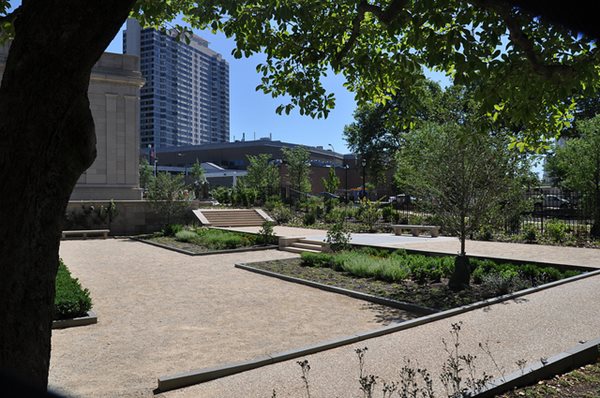 In the corner of this snapshot, you can see the silhouette of one of the Magnolia soulangiana trees that remain in the garden. Planted in the 1920s when the museum was first built, two magnolia trees stand behind the Meudon Gate, creating a gentle canopy of leaves over the entrance.

The age of the trees meant that Olin had to work with contractors to devise unusual and innovative methods of installing marble borders. Near the magnolia trees, the marble borders rest on a hollow support structure, rather than being supported by having the base of the borders be buried in the ground, in order to create an unseen tunnel for the magnolia's roots to grow unfettered. 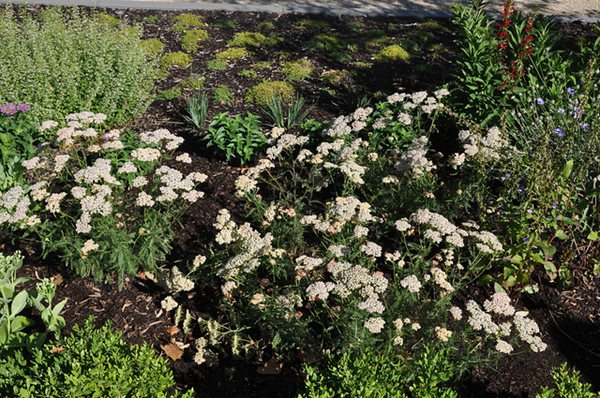 The new gardens include formal perennial borders, with plantings of aster, cupid's dart, coreopsis, cardinal flowers, and phlox, to create a mix of colors and perfumes.

The gardens' upkeep will be overseen by the Pennsylvania Horticultural Society and in the fall, plans are being made for a planting of spring bulbs that will create a riot of color and height next spring. 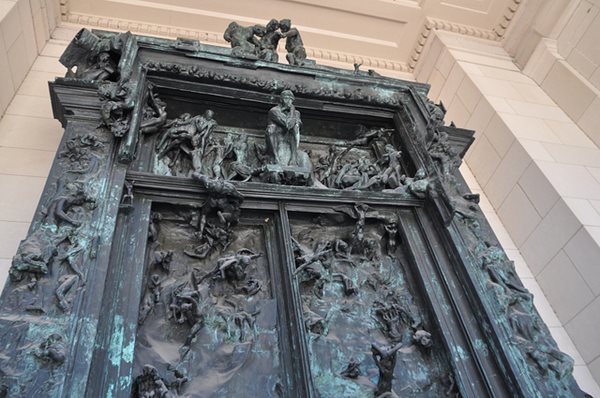 Three original bronze casts were made of Rodin's "The Gates of Hell," including this one. (The other two are at the Rodin Museum in Paris and the National Museum of Western Art in Tokyo.) You can see a small version of "The Thinker" near the top of the door.

The new, renovated gardens are a wonderful way to beckon visitors and locals to the Rodin Museum, but if you want to see the art inside the museum, you should hurry. The Rodin Museum will be closed for interior renovations starting September 5, 2011, and will reopen in June 2012, though the museum's five-acre gardens will remain open during that time. 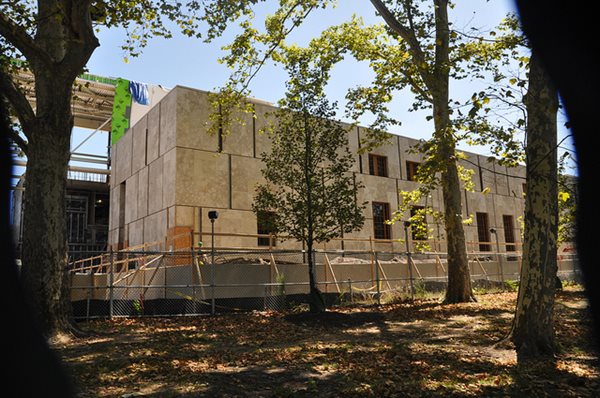 “Great cities deserve great gardens," said Timothy Rub, director of the Philadelphia Museum of Art, which manages the Rodin Museum, at the opening of the renovated gardens, adding, "Parks are an essential part of the urban experience." It's worth noting that Olin, which has also done a number of other landscape design projects in Philadelphia, including a sculpture garden on top of the parking lot at the Philadelphia Museum of Art, is also responsible for the landscape architecture at the Barnes Foundation on the Parkway, which is directly next door to the Rodin Museum.

The new Barnes building, built by Tod Williams Billie Tsien Architects, is the new home of the Barnes museum, which is undergoing a controversial move from its former home. The four-and-a-half acre site, situated next to the Rodin Museum's five acres of gardens, should form a welcoming pair of gardens for visitors and locals alike, once the Barnes opens, in 2012.