Let there be Night

Daylight saving time may bring an early nightfall, but cutting-edge lighting techniques and technology transform the great outdoors after dark. 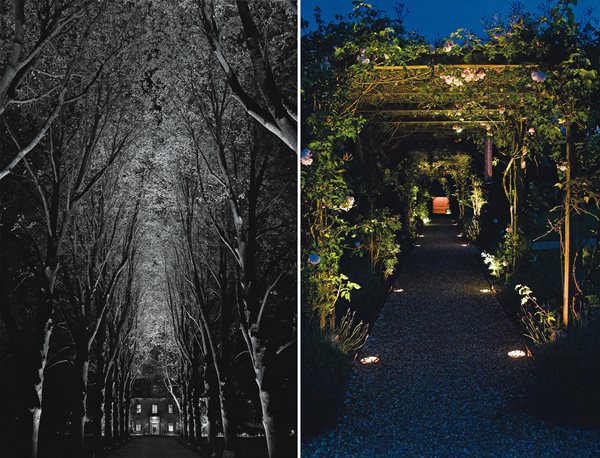 Photo by: George Gruel; Andrea Jones
In the beginning of residential landscape lighting, there was fire. Granted, our Middle Stone Age kin used it primarily for tasks—such as to cook any carrion picked up earlier that day. But as the clan dined alfresco, the fires’ warm tones set a mood. The orange and red hues cast a flattering glow on the Pleistocene hominid complexion; and while the fires’ stark contrast against the black night pointed up a lack of enhancing secondary fixtures—e.g., floodlights filtering down like moonlight through the leaves of a Japanese maple—the twinkling sparks and glowing embers lent a decidedly festive touch.

Far Left: For a Villanova, Pennsylvania, allée of linden trees, Janet Moyer used stake-mounted adjustable halogen lights: 20-watts for the trunks and 50-watts aimed up at the canopy. 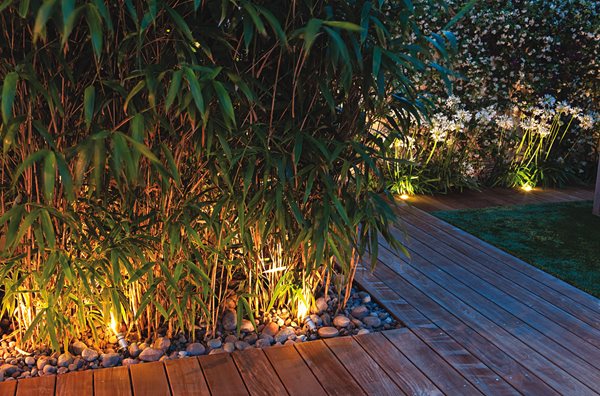 Photo by: Marianne Majerus
In the intervening 2 million or so years, humans have developed additional lighting technologies, with solar power and LED currently at the forefront of a rapidly changing field. But what we ask of our gardens after night falls has changed little: We want beauty, and we want utility. Seems simple? It’s not. “Landscape lighting is really, really difficult,” says Janet Lennox Moyer, who designed the lighting for the dreamy, cathedral-like allée shown here, and whose Landscape Lighting Book (Wiley; 2013) is widely considered the definitive guide to the topic. Moyer ticks off a list of considerations that includes avoiding blind spots; the interplay of multiple light sources and beam spreads; and such fundamentals as how we see at night (eyes become less sensitive to color and detail, more sensitive to brightness and movement). Before you attend to those points, though, you have to decide what you’re hoping to accomplish. “I separate it into ‘it’s for me’ or ‘it’s for the world,’” Moyer says. “If you light up the front of your house, you can’t see it: It’s for the neighbors, it’s a statement about who you are. But what you see when you look out of windows in the kitchen or family room—that has to do with views that connect you from the inside out. And if you then go into the garden, you have to ask yourself how you’re going to use it.”

Left: Ground-mounted spots fill out a bamboo bed and reflect light onto a walkway 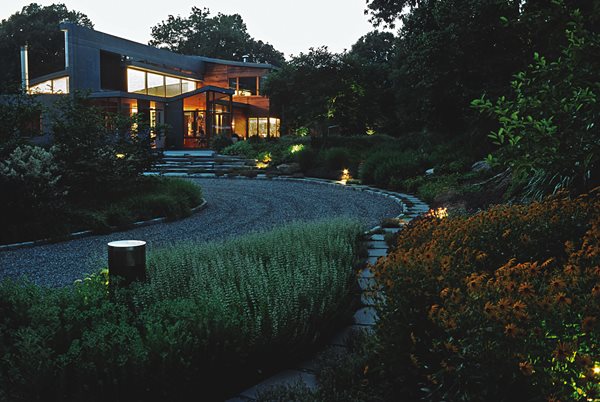 Photo by: Marianne Majerus
In the last half century, there’s been a marked shift in how we relate to the residential landscape, says lighting designer Linnaea Tillett, whose projects include a floating public pool in New York City’s East River and Manhattan’s Battery Bosque, both designed to support nighttime recreation. “When glass walls became the signature of Modernist design,” Tillett says, “that pushed landscape and lighting designers to reconsider the visual relationship between the outside and the inside.” She says no better example exists than Philip Johnson’s 1949 glass-walled house in New Canaan, Connecticut. Inhabitants had nearly uninterrupted views of the 47-acre property, as well as of the Rippowam River Valley. “Landscapes and gardens were treated as a kind of wallpaper,” Tillett explains, a way to extend the visual field of the house.

These days, Tillett’s residential clients aren’t as interested in such passive observation; they want to stroll through and entertain in their outdoor spaces. Either way, creativity is at play when it comes to lighting. “The thing to remember,” says Helen Diemer, president of the Lighting Practice in Philadelphia, “is that you have this opportunity to compose a scene with light. You’re not trying to re-create the same view that daylight offers, you want people to see the landscape in a way they haven’t seen it before.” That could mean highlighting a favorite tree or making the neighbor’s house disappear simply by inserting or withholding light. You’re also not trying to re-create daylight, points out landscape architect Eric Groft, a principal at Oehme, van Sweden & Associates. Occasionally he’ll remind clients with rural properties of that fact. “As I say, it’s the country—it’s supposed to be dark.”

Left: A bollard (foreground) is made of carved-out timber topped with stainless steel. 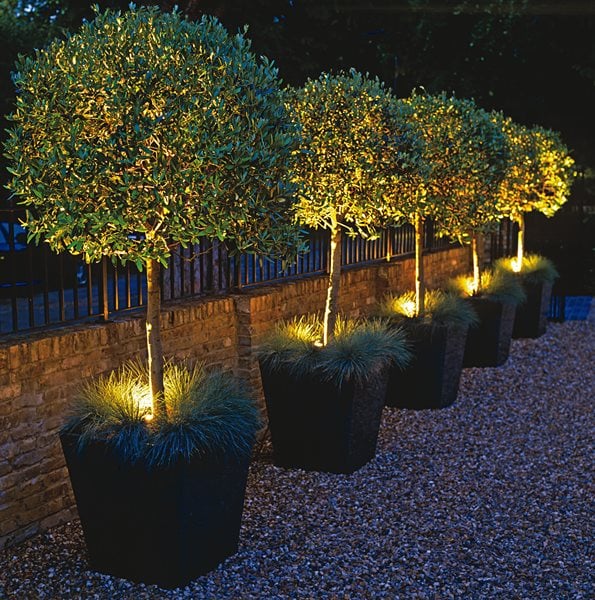 Approaches to this transformation vary widely, and where some designers focus on plant materials, carefully positioning fixtures to show off leaf patterns, bark textures, and habits, others, like Tillett, concentrate on hard surfaces—furnishings, buildings, and the hardscape. “If the clients have paths and little moments they want to go to or are going to sit in at night,” she says, “then we’ll talk about the materials for the path: Can we use a lighter gravel? Can we find a reflective surface, like a rock outcropping that’s a light tone?” Tillett sometimes adds recycled glass or quartz to a lit surface to suggest magic and mystery. “Think about fireflies,” she says. “They’re so tiny but so enchanting.” 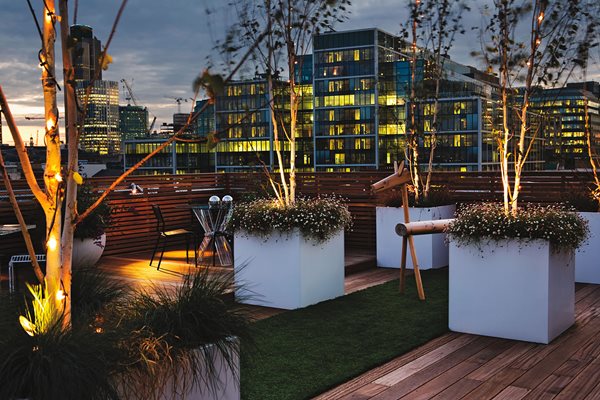 Photo by: Marianne Majerus
What everyone agrees on, however, is that lighting works best when multiple sources are used. San Francisco–based lighting designer Randall Whitehead categorizes lighting into four groups: task (by which you can read or grill); ambient (indirect lighting that can be bounced off walls, which helps soften shadows); accent (providing depth and dimension by highlighting specific objects); and decorative (fixtures that have no purpose other than to be pretty). He says the best results come from layering at least three types of light. “That’s when the composition becomes dynamic. It creates excitement, it draws you in, and it causes your eyes to move around the space.”

Left: A roof terrace pulls ambient light from the cityscape. 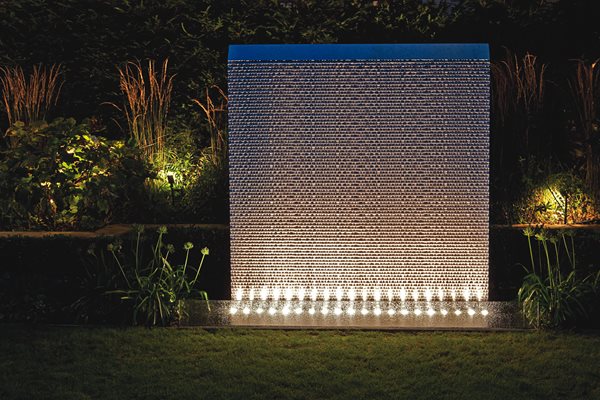 Photo by: Marianne Majerus
The more one learns about lighting, the more it seems advisable to call in the professionals (especially when it comes to wiring fixtures that have to withstand rain and snow). But if budget and space preclude such a measure, there’s plenty you can do on your own. “Buy a clip light from the hardware store and an extension cord,” Tillett advises, “and try out different approaches, angles, and heights using a low-wattage bulb, such as a 6-watt compact fluorescent.”

Tillett has seen great developments in portable lighting systems, but when it comes to a permanent installation, she’s a staunch believer in licensed electricians. “It’s way too dangerous,” she says. “Even for 12-volt systems. It’s the one mistake you can’t afford to make.” 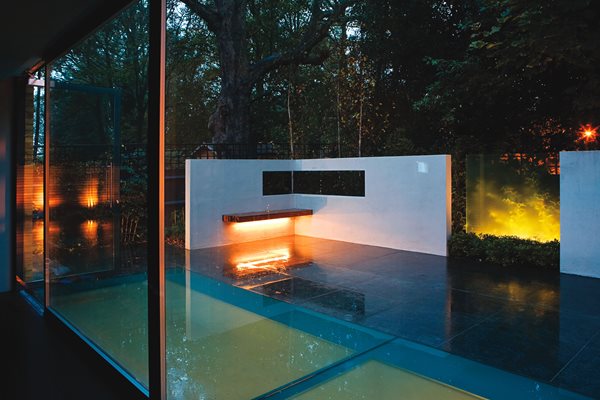 Photo by: Marianne Majerus
Other safety considerations figure in, such as lighting to prevent stumbles and other mishaps. But beware, Whitehead says, of letting the fixtures become more important than what they illuminate. One of Whitehead’s pet peeves? Overly bright pathway lighting set at regular, too-close intervals. “They’re only great if you’re landing your B-52 in the front yard.”

Sadly, the weather in Whitehead’s Bay Area base is not the best for outdoor entertaining. “In San Francisco,” he says, “we have about two nights a year when we can go out without fur and gloves.”

Undaunted, he takes his cue from his Stone Age forebears. “One way to extend outside life is through a heating element like a fire pit.” Rather than wait for lightning to strike a tree branch somewhere near the cave, though, he just bought his at Costco.