An ugly frame does grave injustice to a work of art. And an overgrown, unwelcoming garden is no fitting frame for a home, especially one with the character of Annachiara Danieli’s cedar-shake, Hamptons-vernacular farmhouse, the oldest parts of which date back to 1770. For Danieli, the garden was even more salient than the house (as she says, “I prefer to buy a plant than a chair”), which is why she put her trust in landscape-architecture firm Oehme, van Sweden & Associates to respect the past while bringing the site gracefully into the 21st century. 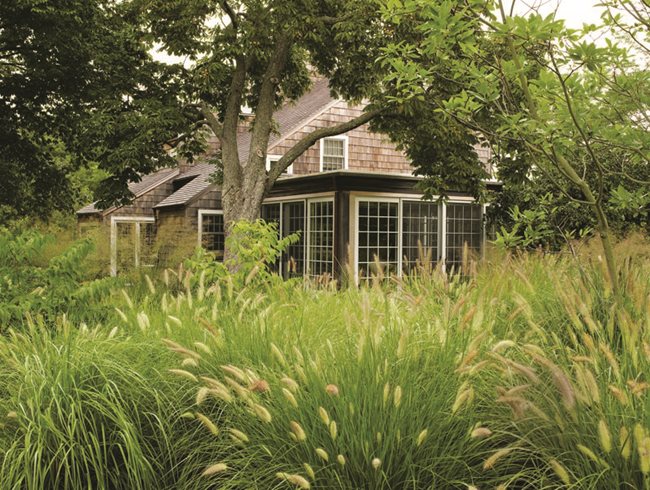 To honor the vernacular of field and forest at this location near East Hampton, Eric Groft of Oehme, van Sweden used generous swaths of grasses like Pennisetum alopecuroides, and low-maintenance perennials such as Rudbeckia nitida ‘Herbstsonne’. A farmhouse in its previous life, parts of the home date back to 1770. (Photo by: Jason Dewey)

A champion of sustainable swaths of grasses and perennials — an elegant stylization of meadow and woodland — Washington, D.C.-based Oehme, van Sweden has become well known for lending sophistication to naturalized plantings. And for this classic OvS project, principal Eric Groft brought a painterly touch to the tenets of less lawn, four seasons of interest and environmental sensitivity. As he says, “We start by addressing sustainability and the client’s needs, then focus on the aesthetics.”

When he began work on the nearly two-acre Danieli property, the front yard consisted of an in-your-face driveway and a broken-down brick sidewalk lined with suffering lavender and overgrown cedars. In the backyard, an off-kilter 1970s kidney-shaped pool (which Danieli refers to as a “bathtub”) and pool house were overwhelmed by out-of-bounds shrubs and trees. As Danieli recounts: “Before, the garden was like a jungle, everything was closed. Eric understood it had to be opened up. I wanted something very natural.” 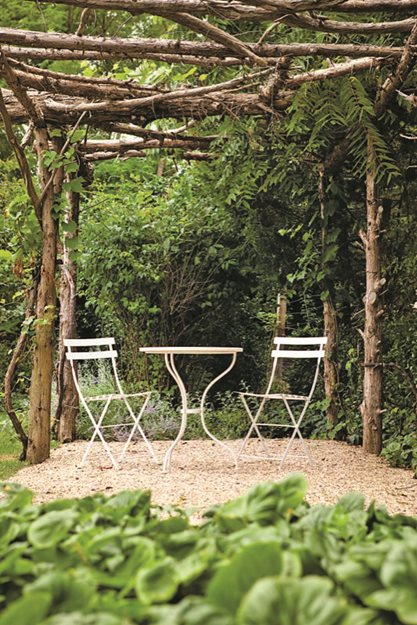 A cozy nook under a grape arbor, made from recycled locust trees, bark still intact. (Photo by: Jason Dewey)

One of Groft’s first considerations was to create a smooth segue between the property and the surrounding rural landscape of fields and woods, pointing out, “There’s no replacement for appropriateness to site.” A significant plus for Danieli when she bought the house was a scenic easement and protected marshland just across the road, with a view beyond to Accabonac Harbor. As Danieli describes the setting, “It’s calm and quiet, and the light is beautiful.”

Springs Fireplace Road, where fires once alerted local residents that ship supplies were ready for pick up, is adjacent to the front yard. Groft wanted to screen out the road’s traffic without blocking the borrowed landscape. The ideal solution was an OvS signature: ornamental grasses. Says Groft, “The grasses were perfect — they’re denser on the bottom to hide the road, but you can see through the tops, which draws your eye up to the water and sky.” They’re also disliked by the ever-present deer population.

Another main goal was to unify the property within its boundaries, beginning with “traffic flow” and one of Groft’s pet peeves, “suppressing the impact of the car,” while also “maximizing the pedestrian experience.” For this Groft moved the garage farther from the house and disguised it with an arbor that hosts a “veil of vines.” A new primary path — made of rustic steppingstones interplanted with thyme and Irish moss — from the driveway to the front door ends at a porch ample enough to greet guests or relax on a bench, but not so large that it alters the façade of the house. 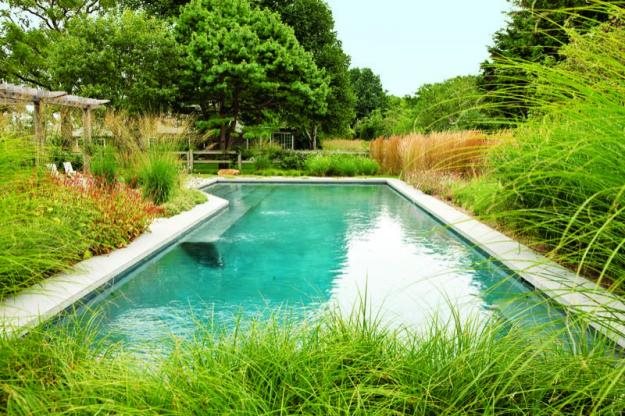 The 60-foot pool is lined with dark tiles to amp up reflections, and its wide steps invite poolside confabs. By surrounding it with graceful grasses and perennials that creep over the coping, Groft gave it an unobtrusive, pond-in-a-meadow feel. (Photo by: Jason Dewey)

But a stroll doesn’t have to stop at the porch. A grape-arbor focal point pulls visitors along a ribbon of lawn that continues to wrap around the house, arriving at terraces in the back and emptying into a greensward shaded by the wide-spreading branches of an old elm. Whenever possible, Groft left mature trees like this in place to serve as anchors and to make the landscape look more established, also including a flowering dogwood and holly that give definition to the front garden, and black locusts on the north property line that blend into the woods beyond.

Along the route a point-counterpoint of perennials offers waves of varying heights, textures and colors, subtly changing with the seasons, all stitched together by billowy grasses and sedges. These “big layers,” as Groft calls them, are designed to be consistent with the scale of the surrounding views, so for plant quantities he eschewed twos and threes in favor of 50, 100 or even 500 of a single species. As Groft points out, this mass approach also “rests the eye and cuts down on maintenance.”

The living palette is at the core of what Groft calls the “thread of consistency,” and the Danieli plant list is essentially a who’s who of tried-and-true OvS staples — for perennials, Agastache, Pycnanthemum, Senecio, Asarum, Nepeta and Geranium; for grasses, Pennisetum, Panicum and Calamagrostis. But OvS also continues to test plants for addition to its stable, and newcomers in the Danieli landscape include Hakonechloa macra ‘Aureola’, Tricyrtis japonica and Carex muskingumensis.

Nestled amidst this mix of green, gold and purple is the dining patio behind the house, close enough to the kitchen for easy access, but far enough to be its own outdoor room. While Danieli loves her time alone in the garden, she also enjoys entertaining, and during the summer, family and friends gather there often. A native of Udine, Italy, Danieli brings home-country traditions to the table and insisted that Groft include edibles in the garden — figs, rhubarb, tomatoes, asparagus and basil. But rather than create a separate vegetable plot, Groft incorporated fruits and vegetables into the garden.

For example, blackberries and raspberries found a home on a long fence separating the house environs from the pool area. Though a safety requirement, the fence was also used  to break up the property aesthetically, but Groft made it scrimlike to allow a view through. Though initially Danieli resisted the notion of a swimming pool, her children insisted and now she’s glad to have it. One reason being Groft’s design — which includes wide steps for people to sit and talk with their feet in the water, dark tiles to enhance reflections and embracing plantings that give the 60-foot pool a pond-in-a-meadow feel.

Tucked away in the far corner the revised pool house, now a guesthouse, repeats the gray siding of the home and serves almost as a folly. A mow-what-grows path loops past it, separating a dense meadow of Pycnanthemum muticum, Baptisia australis, Euphorbia palustris, Eutrochium purpureum ssp. maculatum ‘Gateway’, Rudbeckia nitida ‘Herbstsonne’ and grasses from a hand-sown Eastern Long Island seed mix that merges seamlessly into a neighboring paddock.

A long arbor “nails down the pool,” as Groft says, and provides a sense of entry, its rusticity bridging the centuries. Though planted with a variety of vines and meant for shade, the structure is “high and light, rather than low and dark.” Sited to face west, it’s the ideal spot to lazily let the afternoon slip by, the setting sun giving grassy seedheads a fiery glow. A nearby fire pit, ringed with glacial boulders unearthed on site, can take convivial conversation and star gazing far into the evening. Says Danieli of the finished product: “The garden is simple, but you can see the vision and the design. Before I never went into the garden; now I am part of it.”