In April 2011, a visit to Piet and Anja Oudolf’s home was an unexpected opportunity for me to watch the couple lay out a new section of garden. Piet and his family have lived in an old farmhouse at Hummelo, in eastern Netherlands, since 1982, and I have been a regular guest there since 1994. As the garden has developed and changed over the years, I have observed how every alteration reflects Piet’s ongoing evolution as a designer. This particular change entailed creating a garden from a patch of land that had been a sales area for their nursery business. It was, in a way, the end of an era. The nursery was central to Piet and Anja’s life for years, the plants they chose to grow and sell having played as much a part in launching Piet’s career as a globally known garden designer as the gardens themselves. 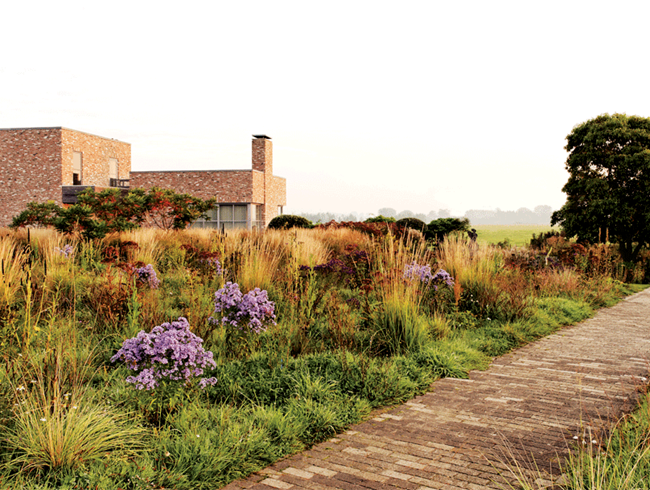 After Piet and Anja Oudolf closed their 6,000-square-foot nursery, it left an empty space. Writer Noel Kingsbury was fortunate to witness its "wild" transformation.

Closing the nursery in 2010 left a roughly 6,000-square-foot area of poor loamy and sandy soil between the farmhouse and Piet’s office building, and an inevitable question in the air. The weather on the weekend of my visit was clear and sunny — perfect conditions for setting out on a new project. I watched as Piet began filling the empty space by planting Calamagrostis ‘Karl Foerster’, an ornamental grass well established as having a long season, providing a strongly vertical visual element, and being very wind resistant in certain soil conditions. The Calamagrostis “echoed the plantings around the office building,” Piet explained. Other plants (very strong perennials that could compete with native and spontaneous vegetation) went in at some distance from each other, more or less randomly. They included late-flowering robust perennials, but also earlier ones like Monarda bradburyana, which flowers from the beginning of June. Between the grass and perennials, Piet then sowed a meadow mix created by the Dutch company Cruydt-Hoeck containing Dutch native grasses and wildflower perennials, such as Dianthus carthusianorum and Valeriana officinalis.

My next visit was in August. The perennials were growing strongly, and the grass and the first of the wildflowers were getting established, including wild chamomile and yarrow. As I walked past the plants, I realized that to the uninitiated, it might look like a garden that had been invaded by wildflowers. Or was it the other way around, a wild grassy area being made into a garden? 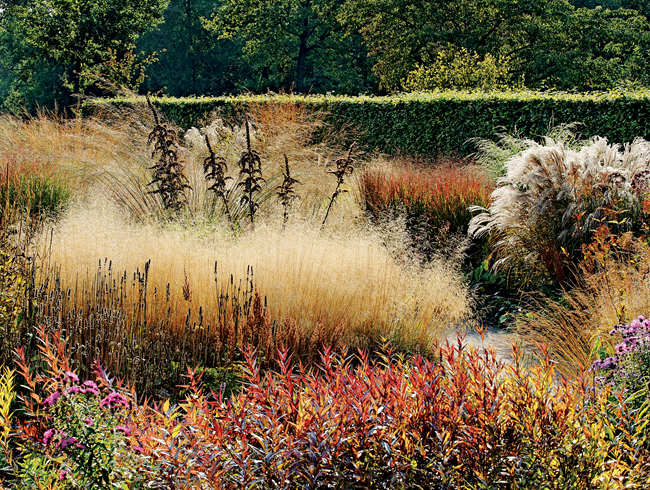 Fluffy plumes of Deschampsia caespitosa grass set off the silhouette of dark late-season Veratrum californicum, a handsome, graphic plant when left to go to seed. (Photo by: Philippe Perdereau)

This was definitely an unconventional plant combination. So why do it? “It was about a creating a solution,” said Piet, “less maintenance for the future, and an experiment to see how robust perennials would grow with native grasses and wildflowers.” Framed that way, the new garden began to make a lot of sense. I could see how the ornamental grasses, including Calamagrostis, Panicum virgatum (the prairie species known as switchgrass), and Festuca mairei (a drought-tolerant species from North Africa) would provide long-term basic structure. And the flowers with intense color — the blue spire of camassia and the deep magenta-pink of the cranesbill Geranium ‘Patricia’ — would be especially striking when seen dotted around in grass.

The dominant flowering season is from June to October. Many of the perennials are species of North American origin, reflecting the long fascination Europeans have had with the continent’s flora. There are asters, species of Eutrochium (Joe Pye weed), Helenium (sneezeweed), Vernonia (ironweed), and relatively new in cultivation here, Monarda bradburiana (Eastern bee balm). “The grasses are slowly spreading among the perennials,” said Piet. “It will become like a perennial meadow.” Key to the aesthetic is the random location of the perennials. Except that it is not random, but the result of Piet’s intuitive placing of plants to create a subtle underlying order. Defining that order, I thought to myself, would probably require a Ph.D. and a very powerful computer. Better just to enjoy it. 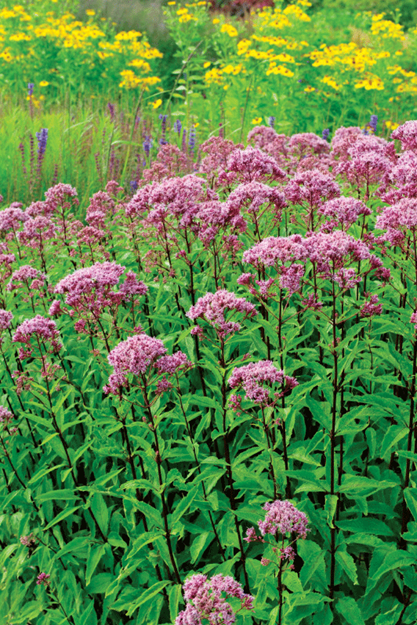 Naturalizing garden perennials among a grass-dominated wild flora has long been a dream of gardeners, but has rarely been done successfully. In his book The Wild Garden, the Irish journalist William Robinson promoted the idea back in 1870 that garden and wild could somehow amalgamate. However, the problem has always been that the strength and tenacity of European native grasses (now, of course, introduced and widespread in North America) make it very hard for nonnative perennials to survive in their midst. Piet is more likely to succeed by not watering much, and for the counterintuitive reason that the soil underlying the old nursery area is relatively poor, so the growth of the native grasses will be reduced, giving the perennials more chance to compete and so to thrive.

The new garden is the latest step in Piet’s creative journey. When he came to Hummelo he had already been a garden designer all his working life, but in a distinctly architectural style. (At the time, garden design in the Netherlands was dominated by Mien Ruys, a gifted and prolific landscape designer who used a wide range of plants strongly framed by geometrically clipped shrubs — a distinctively Modernist version of a traditional European garden art form.) Starting in the 1980s, Piet began to work increasingly with perennials, but with occasional contrasting blocks of clipped foliage. Examples of this plant shaping could until recently still be seen in the new garden in the form of blocks of weeping silver pear Pyrus salicifolia ‘Pendula’.

For many years, Piet used perennials in discrete clumps of one variety. Gradually he began to play with scattering key plants throughout a site and creating some areas where plant varieties were intermingled. He explored these ideas in the Lurie Garden in Chicago, completed in 2004. Since then he has worked extensively on creating a sophisticated, nature-inspired blending of perennial varieties — an approach evident in his work at New York’s High Line. The “perennial meadow” experiment at Hummelo looks like the latest step in a journey that has become wilder and wilder.