My Garden: Using Planters and Pathways to Lure the Eye

In residential gardening, one of the toughest challenges is what to do with those narrow, cramped side yards and how to make them attractive passageways to the backyard. A creative approach to that quandary is on display in the garden of Martin and Suzanne Ferera, Vancouver, British Columbia. The work involved turning a 7-foot-wide area on the west side of the house, constricted by fencing on one side and the house on the other, into an alluring trail to the rear garden and patio. 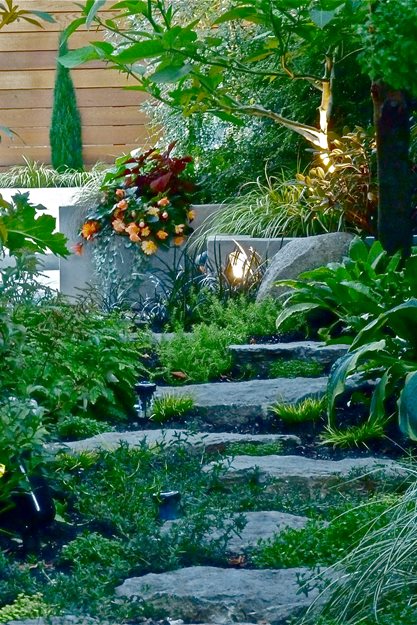 Looking south up the zigzag path from the side garden toward the rear garden and pool at dusk. The passageway is well lit by low-voltage lighting. Photo by: Susan Curtis.

“When we bought the house, the rear garden was lawn with a narrow bed along the garage wall on the east flank and a low fence on the west. The side garden was nothing more than an overgrown alley with access to a telecom box and gas meter. With our kids now grown, we decided to re-landscape,” says Martin Ferera. 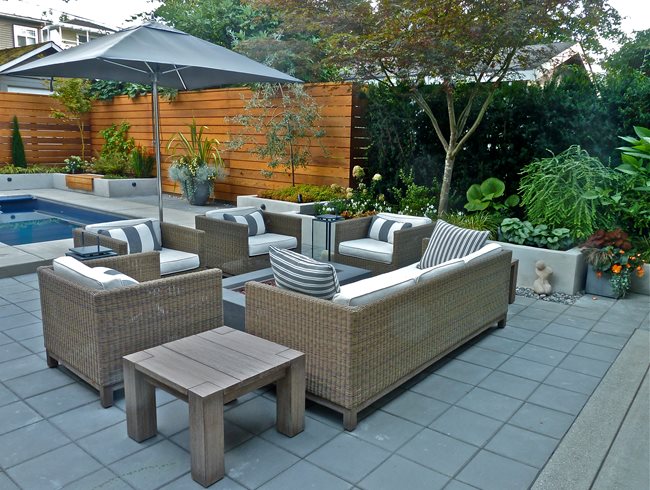 The back patio and pool is accented by raised concrete-walled garden beds and planters, with a tall cedar fence added for privacy. A large Japanese maple and willowleaf pear (Pyrus salicifolia 'Pendula') in the background provide shade. Photo by: Susan Curtis.

They used the skills of garden designer Damen Djos of Vancouver to create a secluded side garden with a stepping-stone path that would make the walk to the backyard a journey of discovery. They also wanted to revamp the backyard to create more privacy and areas for entertaining and relaxation. 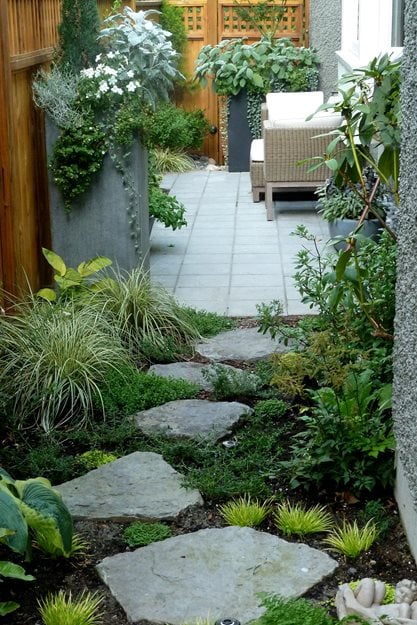 The zigzag path connecting the back garden to the side garden is accented by large planters that flank the gate and help to define the space. The ground cover between the stepping stones includes Acorus gramineus 'Minimus Aureus', gold hostas, Fuschia 'Hawkshead', Carex oshimensis 'Evergold', Lithodora diffusa 'Grace Ward', Soleirolia soleirolii 'Aurea' (gold baby's tears), and a relocated rhododendron. Photo by: Susan Curtis.

“With the back garden, we decided we wanted to have a pool and a fire pit and a tall fence for privacy. For the side garden, I wanted to create a visual lure to draw your eye, but also have it partially obscured with a separate patio where you could sit privately. Damen and I talked over how we could use the existing stepping stones from the old rear garden to create a zigzag path to connect the side and rear gardens, patios, and seating areas,” says Ferera. 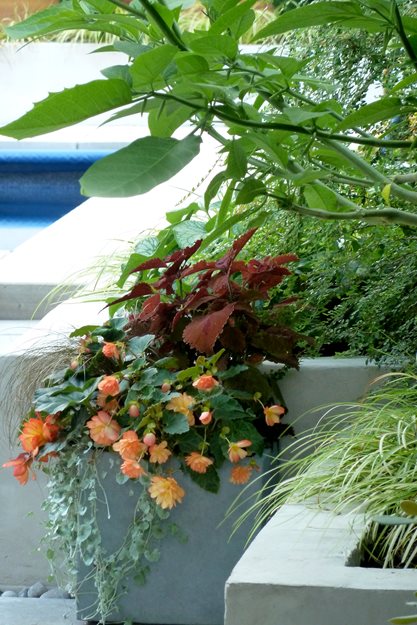 A square concrete planter in the backyard, in front of the concrete walled planting beds, is a colorful blend of 'Illumination' begonias, Dichondra argentea, ‘Sedona’ coleus, and Carex flagellifera. The large leaves in the top foreground hang from a Brugmansia (angel’s trumpet), which is laden with large, trumpet-shaped flowers that are especially fragrant in the evening. Photo by: Susan Curtis.

The rear garden is about 20 feet wide and 45 feet long and enclosed on the south and west by a fence and yew hedge and garage on the east. Most of the trees and plants are contained in raised concrete-walled garden beds and large planters, which are strategically placed to draw the eye to various focal points and create a poetic transition from one area of the garden to another. 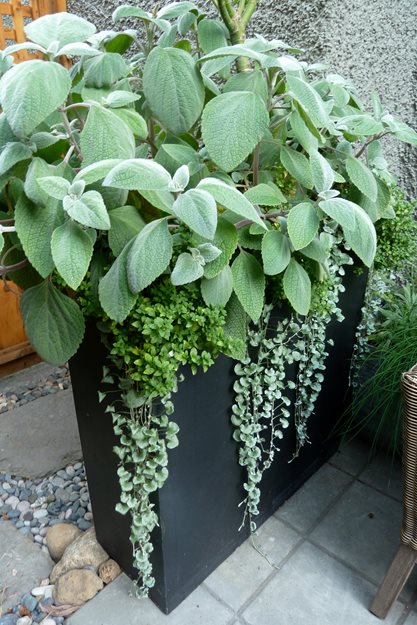 A planter at the far end of the side garden is planted with an Acer palmatum 'Shishigashira', Plectranthus argentatus 'Longwood Silver', Dichondra argentea, and white-double-flowered Bacopa (not yet in bloom). It not only serves as focal point, but also acts as a “green railing” indicating a change in elevation from the stepping stones and river rock up to the concrete paver surface. Photo by: Susan Curtis.

“I wanted to keep the plant palette very simple and calm in this space, using silver and gold foliage and white flowers for a relaxing effect,” says Djos. “In the back garden, I gave the overgrown yew hedge a good pruning to get it back into shape, and installed a new horizontal cedar fence to replace an old lower fence and provide greater privacy from the neighbors and a back lane. The patio surface is concrete paving tile with river rock along the edge where it meets the concrete walls. The river rock provided a great surface to showcase the planters and small stone sculptures made by Suzanne’s mother.” 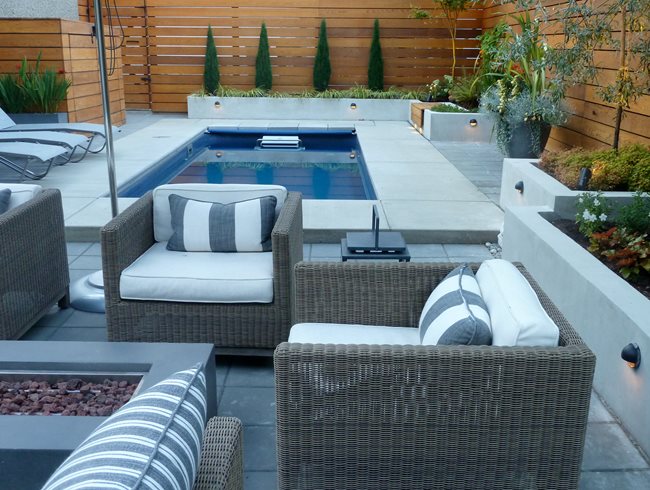 A view from fire pit area overlooking the pool at dusk. To the left is a small cedar shed in the style of the fence to house the pool equipment. Tiny Tower Italian cypress (Cupressus sempervirens 'Monshel') are planted in the narrow concrete planter along the back. Underneath is Acorus gramineus. Photo by: Susan Curtis.

The pool has an endless-pool swimming machine, so the Fereras can use it for exercise and recreation. The mechanics for the pool are disguised by a cedar-clad enclosure that matches the fence. A fire table and patio furniture from Restoration Hardware were added to create an outdoor living room for relaxation and entertaining. 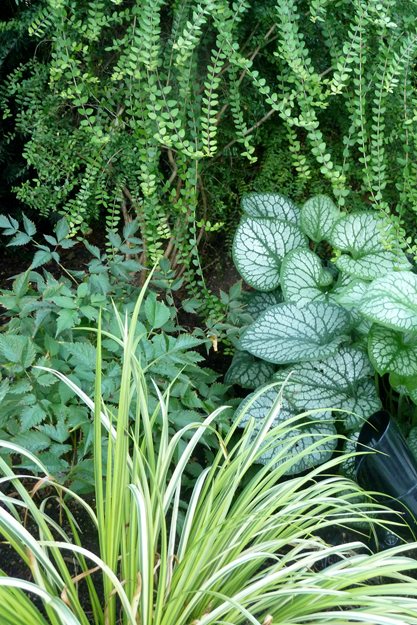 A closeup of the underplanting of the Japanese maple in the back raised concrete bed. Lonicera nitida 'Baggesen's Gold' and Acorus gramineus were used for year-round evergreen interest, Brunnera macrophylla 'Jack Frost' for early spring magic, and white astilbe for color in the summer. Photo by: Susan Curtis.

“The garden still has a lot of growing to do, so we are looking forward to it filling out and maturing. My favorite feature is the zigzag path connecting the two areas and the views it creates. Low-voltage lighting makes the rear garden a delight at sunset and during the evening, which makes entertaining so much more enjoyable,” says Ferera. 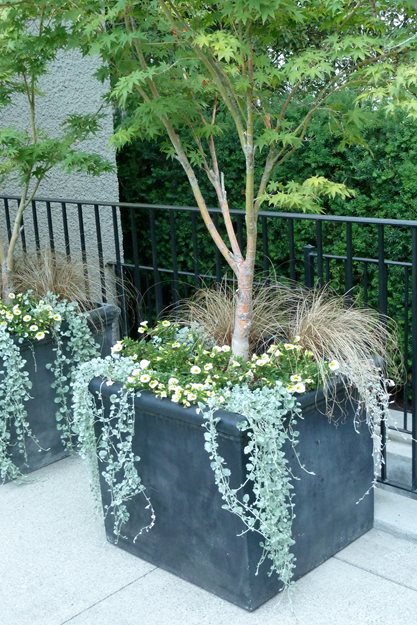 Charcoal-gray fiberglass planters on the east side of the patio, by the basement entrance to the house, are planted with Japanese maples, Acer palmatum 'Sango-kaku', Dichonrda argentea, Carex flagellifera, and Calibrachoa. Photo by: Susan Curtis.

See another project completed by Djos and featured on GardenDesign.com:
My Garden: A Lesson of Beginnings and Endings 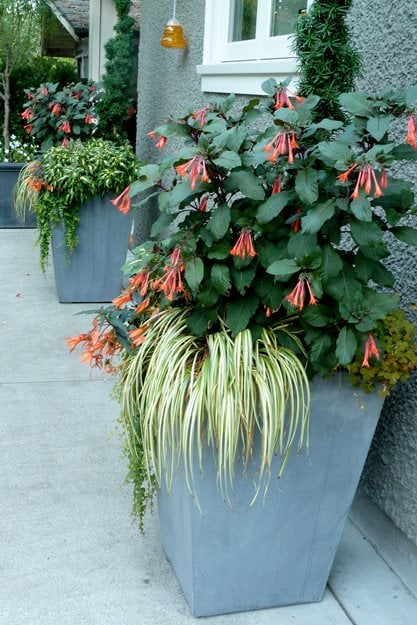