A Tiered Garden in Austin, Texas

A steep and ramshackle plot of land is transformed into a peaceful retreat. By Ted Loos

Rarely has there been a more unprepossessing lot for an extensive residential landscaping project: a scrubby two-acre parcel shaped like a pie slice and dominated by a steep hill bordering a busy and loud thoroughfare in Austin, Texas. When designer Rick Scheen went to examine it for the first time, large culvert pipes stuck up through the ground in a ditch, trash was strewn everywhere, “and there were some really bad views of tear-down houses,” he recalls. 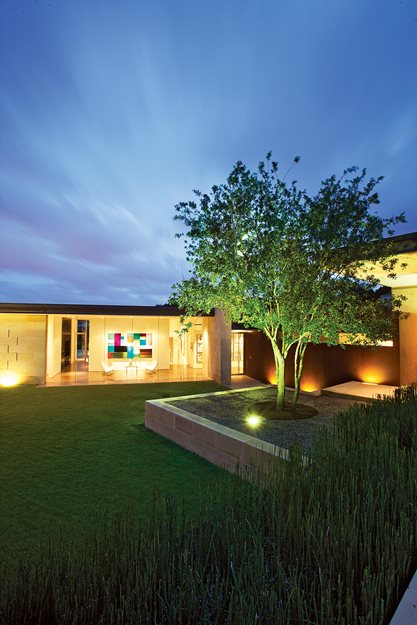 A dusk view looking across the lawn planted with Zoysia japonica ‘Palisades’, a drought-tolerant and disease-resistant turf, into the sitting room of the house. A live oak is planted in a raised bed constructed of limestone with a ground cover of Mexican beach pebbles. Photo by: Jon Whittle.

It seemed all traces of the natural world were obscured. “So, we asked ourselves, ‘How are we going to make this look rural?’” says Scheen, owner and founder of Austin’s LandWest Design Group. It was an odd question, considering the mess at hand, but as it turns out, it’s one that precedes many a wonderful garden design. “You get to a site and there’s an enormous sense of potential — what this could be, what you could build here,” he says. Fortunately, Scheen had worked with the couple who purchased the land on several other projects. The trust and comfort of a longtime relationship came in handy for this extensive renovation, which eventually took more than two years to complete.

The result is a dramatically tiered, lushly green outdoor space that feels like it’s in the middle of the country, surrounding a modern home of stone and glass that’s perched on the side of a hill. Scheen is a former specialist with an Army National Guard engineer unit, and that experience came into play frequently. “From the bottom of the site to the top there’s an elevation change of 60 feet,” he says. “That’s a huge challenge, but it also creates a dynamic property.”

Major infrastructure was required, beginning with the addition of retaining walls. Scheen used Corten steel to build a series of planted terraces. He left portions of the metal visible, a striking touch he used with other clients, including Laura Rulon-Miller, an interior designer who worked with Scheen on two houses, including her own.

“Rick is not only good at the aesthetics but function too,” says Rulon-Miller, who lives on a slightly sloped parcel, for which she needed maximum use. “He accomplished that  with tiers. The steel of the borders ages spectacularly.” Indeed, the orange-brown surface on the metal gives an extra dash of color to this Austin landscape.

Water is everywhere — this is no dusty Texas Hill Country. The showstopping feature on the property is definitely the waterfall feeding into a creek behind the house’s back patio, perfect for the party-giving clients. “We wanted a Fallingwater feel,” says Scheen, referring to Frank Lloyd Wright’s masterwork in Pennsylvania, which is cantilevered over a falls. “It’s a real wow factor for entertaining.” 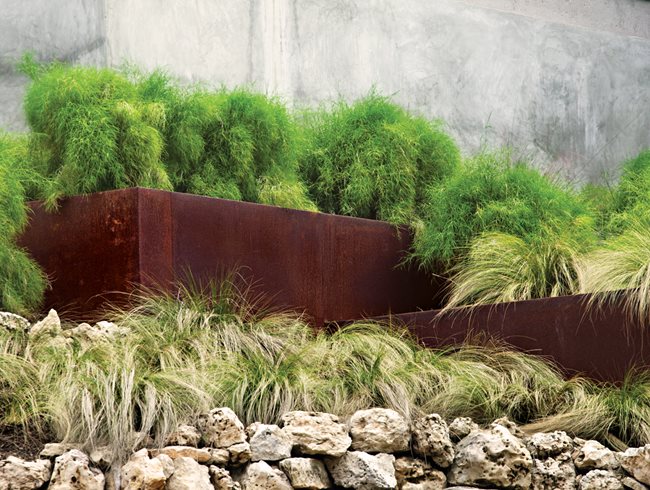 Incredibly, the water feature was added on three-quarters of the way through the project — after much work had already been done, the clients decided they really wanted it, despite the delay and extra costs. “So we spent a year creating a 500-foot-long creek and waterfall for it,” says Scheen. The self-contained aqua-loop uses well water and can push up to 1,200 gallons a minute through a series of  pumps, flowing over Texas limestone boulders and into small ponds.

That might sound invasive, but Scheen says, “It created a flourishing ecosystem where there was once nothing.” The list of new species now living there goes from mosses, lilies, and ferns to turtles, fish, and cranes.

The terrace plan was further complicated by the fact that a local ordinance capped the height of each new level at 6 feet, but Scheen saw the restriction as a chance to layer the landscape with even more greenery — but only types that made sense for Austin. “The idea was to use primarily native plants but not that many different species,” he says. The limited number was partly an aesthetic choice so the design wasn’t visually noisy.

But the challenges posed by the local soil and climate also narrowed the field — Austin and its environs are subject to huge ranges of temperature (scalding summer to cool winter) and rainfall (from drought to deluge). In the end, only about 15 species were planted on the entire two acres. “Whatever we picked, it had to be able to withstand those changes,” says Scheen, not to mention a ravenous local population of white-tailed deer.

Leyland cypresses were the first order of business — some 100 of them, in fact, especially along the border of the busy road. The trees selected had to help create buffer zones, says Scheen, since screening out the 18-wheelers driving by was paramount (Leylands grow in full and thick). The indigenous bald cypress (which turns copper red in the fall) were also planted, particularly down at the creek, to give it “that lazy Texas river feel.” Both trees add a strong vertical element to the landscaping, which is dominated by the horizontal lines of the house’s architecture. 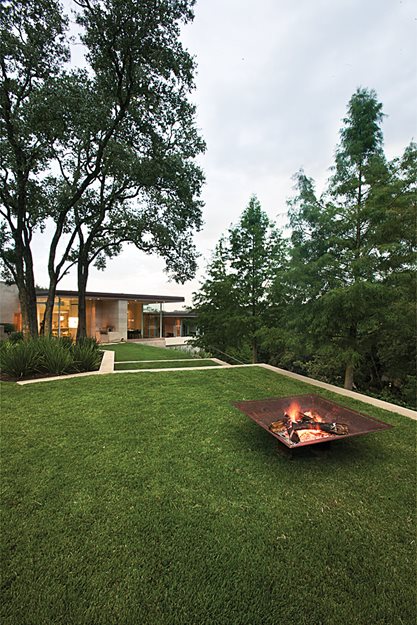 A custom-design Cor-Ten steel fire pit by LandWest Design Group is situated on the kids' playing field, one of the few flat areas of the property. Photo by: Jon Whittle.

Pride of place was given to live oaks, which Scheen calls “our Texas lifeblood.” The native shade tree loves stony soils, so in addition to dotting the lawn with them, Scheen also planted one adjacent to the house in a square-shape gravel plot. “When you grow them in the rock, it gives them a twisted shape,” he says. “Stress gives them character.”

No one likes a stressed-out-looking lawn, however. Scheen favors a hearty turf grass called Zoysia japonica ‘Palisades,’ which was developed at Texas A&M University, on many of his projects. “It can take the heat,” he says. “It’s disease-resistant and easy to take care of.”

Blue-tinged agave, the spiky desert-dweller that thrives locally, looked great against the limestone of the house, so Scheen planted about 100 of them. He also planted silver pony’s foot, the perennial with a similar, silvery cast. Bright purple Mexican bush sage provided an exclamation point of color. “It’s all about contrast,” he says.

Scheen had the aural experience of this project in mind at all times. Inland sea oats and Mexican feather grass act as sound buffers and make a “soothing rattle in the wind,” he says. Combined with the babble of the creek — and the blocking of traffic noise provided by the cypresses — the choices make listening to the landscape a pleasure.

The glass and stone of the house are fairly minimal, and they contain the clients’ bold collection of contemporary art. But LandWest created a soft cocoon for this strong architectural statement. One outdoor walkway in particular, leading from an upper terrace down to the water, struck Scheen as forming the perfect gesture for the property: “It’s like the house is reaching out its arm into nature.”

Ted Loos is a New York-based writer who covers design for The New York Times, Vogue, Architectural Digest, and other publications.