Great Gardens: Thrill of the Chases

In the mid-1950s, when Ione and Emmott Chase broke ground on a parcel of former logging land, their intent was simply to build a place to retire in the western Washington terrain they’d known and loved all their lives. They never thought it would become a celebrated public garden, but the 4.5 acres they referred to as their “yard” now welcomes visitors from April through October and has been identified as an outstanding example of regional modernist design that’s well worth preserving. 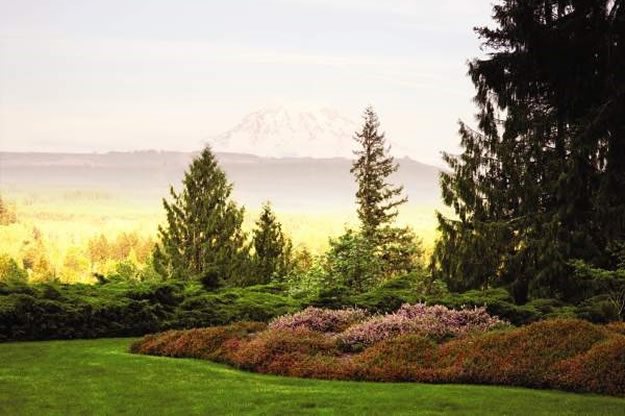 The view from Ione and Emmott Chase’s home juxtaposes the drama of Mount Rainier’s snow-covered peak with the near landscape’s gentle swaths of Erica carnea, lawn, and old-fashioned Pfitzer juniper. Photo by: Marion Brenner.

The Chases, do-it-yourselfers of modest means, launched their project after decades of living in the company housing of Emmott’s employer, Puget Sound Power & Light. Equipped with axes and dynamite, the couple cleared enough stumps to make room for a simple, one-bedroom house. They hired an architect to design the building, whose curved roofs and exaggerated overhangs follow Japanese traditions, but then did much of the actual construction themselves. Emmott installed plumbing and hand-split cedar shakes for the roof; Ione sewed cushion covers and built a floor-to-ceiling fireplace wall with stones she’d harvested from nearby Puyallup River.

Once the house was livable, Ione turned her full attention to the garden, which occupied her for the next half-century. For the highly Japanese-influenced garden that hugs the house’s foundation, the Chases called on landscape architect Rex Zumwalt, again implementing the resulting plan themselves by planting, digging ponds, and pouring curved cement patios. Beyond that somewhat formal and contemplative entrance garden, however, Ione let her connection to the region dictate choices, and she ended up establishing a three-quarter-acre section that resembles an alpine meadow as well as a carefully groomed woodland twice that size, which Ione freely allowed was actually her favorite spot of all. 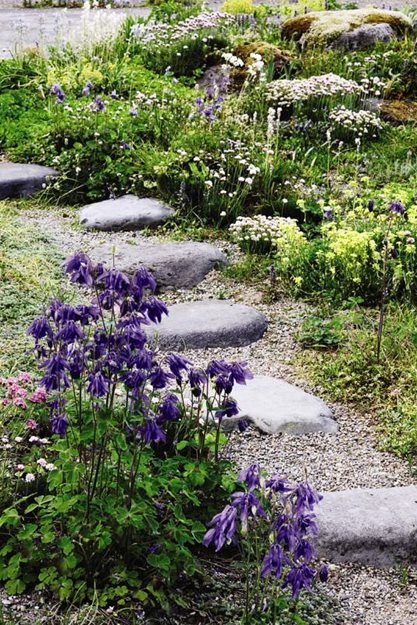 The rock garden features dwarf and alpine plants that would be lost in the expanses of the meadow garden. Throughout the property, Ione favored hardier plants — such as the Aquilegia vulgaris, Armeria maritima, and Erysimum sp. (dwarf wallflower), all shown here — that could take care of themselves when she and Emmott went to their Canadian cabin for two months each summer. Photo by: Marion Brenner.

Even as the Chases were drawn to the variegated terrain of the bluff-side property, it presented numerous obstacles. Alders and blackberries invaded the forest floor, the sandy loam contained none of the mammoth rocks the Chases encountered on hikes through the Cascade foothills, and the budget of their one-income household was not conducive to the instant transformations that huge nursery purchases offered up. Necessity proved to be the mother of invention, however, and Ione became a master propagator, cultivating even finicky natives, such as vanilla leaf. What she couldn’t grow, she gathered, leading to copses of Western hemlocks she and Emmott harvested from underneath power lines and beargrass starts dug from Stampede Pass. With pain-staking consistency, Ione moved plants and trees around the property in order to create masses, including seas of trillium in the forest and a peninsula of heather on the front lawn.

Ione was the one who spent time in the library researching design principles, but Emmott was the muscle. “He knew his way around a winch,” says Rosina McIvor, a founder of Chase Garden Inc., the nonprofit group of supporters who have been instrumental in ensuring the garden would live on without the Chases. (Ione passed away in 2006 at the age of 97 and Emmott in 2010 at 99.) “They worked well together,” says McIvor, who became friends with the couple after her rock garden society visited 18 years ago. “And they pretty much worked dawn to dusk after he retired.”

As the brawn of the operation, Emmott could often be found lashed to trees while he pruned out dead branches, and he occasionally enlisted his company’s flatbed truck over the weekends (paying drivers time and a half) to pick up large boulders that came to be central features throughout the property. If the initial installation of a rock didn’t suit Ione, which was often the case, Emmott would wedge in boards under one side in order to leverage it into a better position. 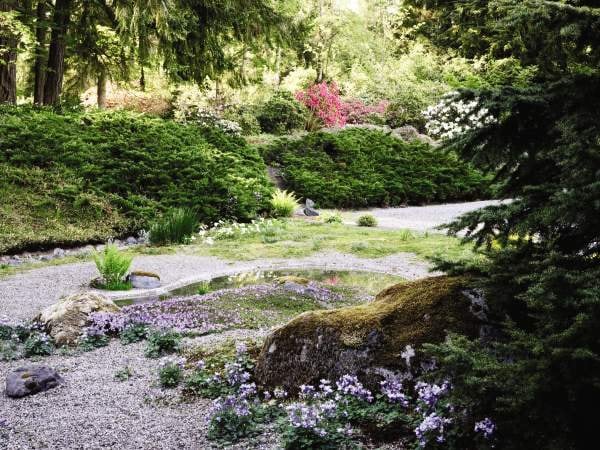 The result of the Chases’ efforts, says Seattle-based garden writer Marty Wingate, is a garden with “a great sense of place.” The stunning views of Mount Rainier certainly contextualize the property, but so do the common native plants, such as low Oregon grape and evergreen huckleberry that Ione used to great effect. “There are fabulous, well-designed, well-planted gardens that I love that could be almost anywhere,” Wingate says, “but this garden could only be here.”

The garden’s regionality is what convinced the New York-based Garden Conservancy to take on ownership of the property after the couple offered to bequeath it to them. The Chases had no children, and, as Emmott told a newspaper reporter in 1997, “We wanted somebody who wouldn’t buy the place and then cut down the trees.”

Bill Noble, director of preservation projects for the Conservancy, says his organization’s mission is typically more about stewardship than ownership, but it could not refuse such an intact example of stylistic evolution. “The Chase Garden emerged out of ideas that had come from Japan, Thomas Church, and that were promoted by Sunset magazine,” says Noble, “and the Chases did the whole thing. They designed a house in this new style and made a garden in this new style. There are very few of those works that remain in the Pacific Northwest.”

Over time, the Conservancy hopes to transfer ownership to McIvor’s group, but along the way, they’re helping address pragmatic issues, such as how to add five new parking spaces without disrupting the aesthetics and how to develop the property in keeping with the Chases’ vision. Fortunately, McIvor was able to record many conversations with Ione about her plans, and the property’s full-time horticultural manager, Jeannette Matthews (who’s been on-site for 10 years), had direct contact with both of the Chases. Perhaps the most important thing to preserve, though, is the passion the Chases had for the splendor they were smart enough to recognize as being within their reach. “It’s our love that makes it seem beautiful,” Ione once said to McIvor. “Who says you can’t love inanimate things? You can.”