Local native plants steal the show from a world-class collection of sculpture in the new park transforming Seattle’s shoreline. By Valerie Easton

Seattle waited seven years for its new sculpture park to be completed, and when it opened on a sunny weekend in January of 2007, people turned out in droves. And no wonder. The nine-acre site, long a contaminated industrial blight along the city’s shoreline, has been transformed into a sophisticated urban green space by the New York firm of Weiss/Manfredi. Their design for the Olympic Sculpture Park crosses highway and train tracks to link a hip, urban neighborhood to the city’s working waterfront. With western and southerly views of Puget Sound, Mount Rainier and the jagged, snowdrenched Olympic Mountain range, this is one spectacular site in which to display art. But the sculptures and architecture are nearly upstaged by the park’s iconic Pacific Northwest plant habitats devised by landscape architect Charles Anderson. 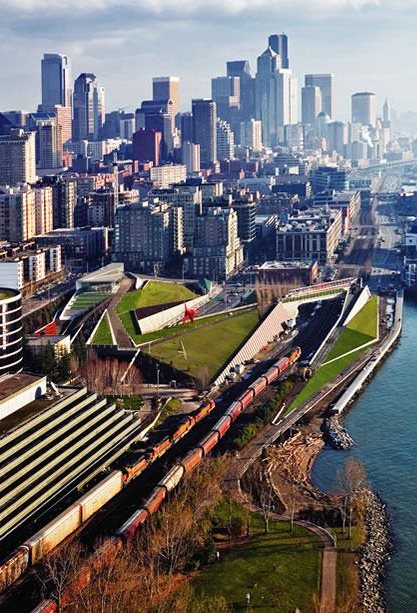 The sensory and ecological appeal of the 80,000 mostly Northwest plants, many installed at fairly mature size, is so immediate that birders with binoculars will soon be stalking the site as relentlessly as art lovers. Visitors will appreciate the plant tags that give ethnobotanical information about the huckleberries, snowberry and salal that flourish beneath the native conifers. Families will enjoy picnicking on the grass of the greensward, homage to the area’s Olmsted legacy, but it’s the sweeping meadows of wildflowers and native grasses that attract comment.

Though native plants might not seem the obvious companions for totemic works of art like Alexander Calder’s hot-orange “Eagle,” project manager Chris Rogers says the environmental tenet was integral from day one. “We learned from visits to sculpture parks across the country and around the world that while many people go to see art, many others go to see the vegetation,” says Rogers. The park’s native plant palette not only distinguishes it from other sculpture parks and gardens, but also reflects its quintessential Northwest shoreline environment. “We absolutely wanted the contrast between the formal components of the park and the organic experience of plants, along with diverse settings for the art,” says Rogers. Distinctive plant communities define the park’s various “precincts” of valley, grove, meadow and shore, while softening the strong geometry of its central Z-shaped path. Visitors descend into a deeply green coniferous valley planted in dawn redwoods and ginkgos. Douglas fir, red cedar and western hemlock are under-planted with columbine, iris, sword fern and snowberry. Sculptor Richard Serra’s monumental “Wake” undulates through the valley; in time the conifers will grow up to shelter its battleship-like scale. 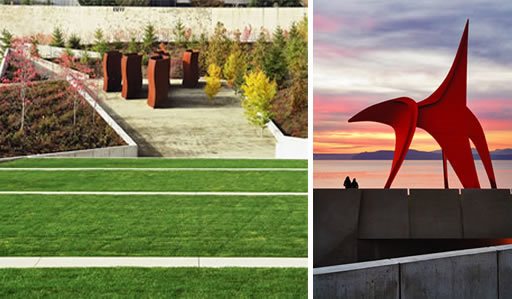 The grove’s rhythm of white tree trunks and cloud of autumn gold foliage form an airy counterpoint to the mostly evergreen valley. Hundreds of quaking aspen, massed in a triangular grid, create a scene so magical you’ll feel you’ve slipped through the wardrobe into Narnia. Anderson ramped up the landscape’s essential characteristics to create just such intensity; designers went to Idaho for the aspens because they consider those the brightest gold of all aspens. ‘Eddie’s White Wonder’ hybrid dogwoods are planted en masse up the western slope of the valley, chosen for their large creamy blossoms and disease resistance. Great care was taken with the selection of each and every plant. “I probably hand-selected 90 percent of the aspens,” says Rogers.

Open wildflower meadows lie along the park’s high spine. Camas lilies, pearly everlastings and western columbine bloom in succession amidst tufts of native grasses. From the meadows, an overpass leads down to the restored shoreline. There a sandy beach is backed by plants chosen for their value in enhancing salmon habitat as well as their ability to withstand salty sea spray, including dune grasses, shore pines, alders and nootka roses.

As befits their setting, plants were placed with an artist’s eye for mood and context. The open, promenade areas encourage sociability and taking in the views. The aspen grove is all about seasonal change, while the valley floor evokes a sense of quiet contemplation. Perhaps most atmospheric is Mark Dion’s “Neukom Vivarium,” where a 55,000-pound, 60-foot nurse log (i.e. a fallen tree that acts as host to other plants) lies sheltered by a slim greenhouse with overhead panes painted green to simulate filtered forest light. The massive log sprouts mosses, ferns and huckleberries, a close-up lesson on the process of decay and regeneration.

Nature has long inspired art. In the Olympic Sculpture Park, Northwest native habitats and natural history are orchestrated to blend a living landscape and contemporary artworks into a seamless scene.

The Olympic Sculpture Park is part of the Seattle Art Museum. It is free and open to the public, and is located at 2901 Western Avenue in Seattle, Washington.