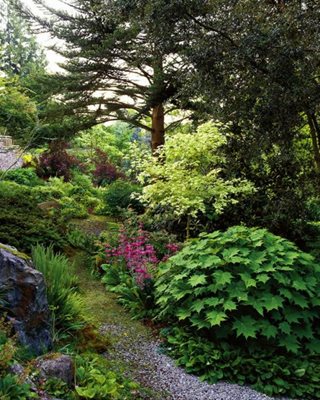 The Elisabeth Carey Miller Botanical Garden, tucked away in a quiet suburb of Seattle, was carved out of native woodland on a rocky slope overlooking Puget Sound by the original owner, Mrs. Miller (1929-1994).The forest of the coastal Pacific Northwest is distinctive for its canopy of towering, evergreen conifers, primarily Douglas fir (Pseudotsuga menziesii), western hemlock (Tsuga heterophylla) and western red cedar (Thuja plicata). In addition, two very different maples grow in the woods: vine maple, which is shrubby, multistemmed and closely related to Japanese maples, and the stately big-leaf maple (A.macrophyllum). Native shrubs include evergreen huckleberry (Vaccinium ovatum), red huckleberry (V.parvifolium), salal (Gaultheria shallon) and two species of mahonia (Mahonia nervosa and M.aquifolium). Ferns and trilliums are scattered over the forest floor.

The dense shade beneath coniferous trees, coupled with soil conditions that tend to acid, mean Northwesterners must be creative to garden in woodlands. As director Carolyn Jones explains, “Very few gardeners in the Pacific Northwest stick exclusively with native plants, partly because of the sheer size of the trees and partly because of the lack of color through much of the year.” Mrs. Miller took advantage of the mild maritime climate to indulge her love of rare and unusual plants from all over the world.

LAWS OF THE FOREST

Keep the design informal – Simple, low-key design keeps the focus on plants and encourages the illusion that the multiple layers of green and contrasts in texture “just happened.” Paths meander, steps are made of irregular stone and cedar rounds. Says Jones, “The only added elements are some burnt-out logs for effect and a birdbath made of a cedar stump.” Providing drama are the dark trunks of the towering conifers, like a proscenium arch in a grand old theater.

Choose exotics that fit – Northwest gardeners use exotic (nonnative) plants to add variety to their woodland, but, as Jones explains, choices based on natives tend to be the best fit. “I believe that the Miller Garden is admired because we use a limited plant palette,” she says. “For example, while we only have one native trillium in the PNW, we grow dozens of trillium species in the woodland. This concept of expanding on a native genus has been applied to acer, asarum, heuchera, saxifraga, mahonia, dicentra and actaea.”

Think beyond spring – The traditional peak time for a woodland garden is spring, and certainly the Miller Garden looks like a fairyland in April. But Jones says she and her team work hard to create year-round interest. “Mrs. Miller created stunning fall color using Acer palmatum cultivars, Acer japonicum ‘Aconitifolium’ and Disanthus cercidifolius [which colors well even in deep shade]. We also use layering to add richness: The tall trees support climbing hydrangeas (Hydrangea anomala ssp. petiolaris and H. integrifolia), plus vines such as Parthenocissus henryana.”

Pick your battles – There is a balance between high-maintenance effects in some areas of the garden and a very laid-back policy elsewhere. Choosing just where to expend energy is part of the design process. “We use ground covers such as saxifrages and waldsteinia for textural interest at toe level,” Jones explains, “but that means we must curb growth regularly to prevent one from swamping the other. However, in parts of the garden we have extensive patches of epimedium under large oaks. These areas are an ultrasimplified version of a woodland and require almost no care at all.”

Learn more from the Elisabeth C. Miller Botanical Garden on their website.