Outdoor rooms are like stage sets in a theater you build around your own life. A garden enclosure heightens feelings and associations dulled by indoor routine. It plays with your sense of time and space. Small acts, ordinary events, stand out. In the fine old garden of Barbara Chevalier, stagecraft has a prominent place, not in the sense of staginess — no dying camellias or fussy topiary here — but as design. A few simple concepts wed nostalgia and practicality, structure and fluidity. This garden is all about entrances and exits, paths and passageways, rooms hinting at other rooms, other places, removed from everyday experience. 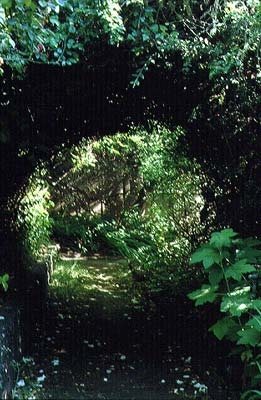 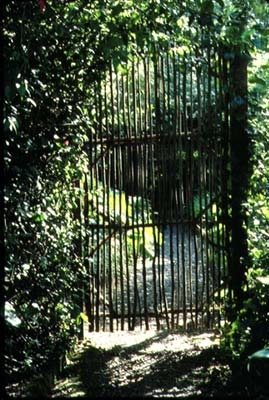 Within the garden the feeling of being somewhere else is palpable. In reality, though, Chevalier’s garden stands only a hedge away from California’s Highway 1 and the center of Stinson Beach, the seaside resort town through which it runs. A busy restaurant, public park, and beach are just outside, though you’d never know it. Some credit must go to time: The towering hedges that shelter this garden didn’t grow overnight. But the theatrical look of the landscape has more to do with its creators. Chevalier used to be an interior designer, and her father, who started the garden in 1917, worked in the theater. A summer retreat at first, the property has been home to five generations. There, Chevalier’s parents held cast parties for San Francisco friends. The garden was a world unto itself, with stables, chicken runs, a vegetable patch, a brick barbecue, and gnarled Monterey cypress hedges in which a child could play house. The horses and chickens are now a memory. The barbecue and the hedges remain.

Chevalier’s father, who liked to fish, made his own stream and swimming pool. “Dad got a horse and plow,” says Chevalier. “He told his helper, 'Dig here’ — eight feet at the deep end, three feet at the shallow end. Then he lined it with chicken wire, poured cement, and put in cobblestones and a drain. The water just ran in and out. I swam with the trout — and lots of bugs.” 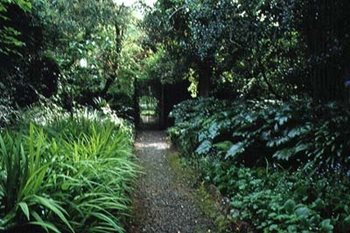 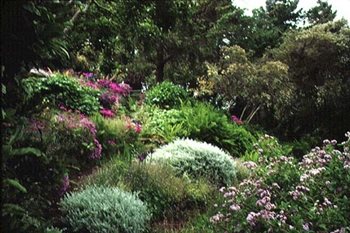 In the late 1960s Chevalier inherited the property. Keeping the basic design, she divided the garden into more distinct rooms. In her parents’ day, she says, “Hikers could look right into the house and see what we were having for dinner. I punched six-foot metal poles through some mattress vines [Muehlenbeckia complexa], strung barbed wire beween them, and let the vines grow high enough to give us privacy.”

The vegetable garden she ceded to the gophers and, in its stead, watered the tough native grasses. Later, she put in velvety lawn where cornstalks had once stood. Today, family weddings, parties, and chorales are held in the tranquility of a boxwood hedge and an apple tree. The outer cypress hedge is so dense it baffles the sound of Pacific surf. Five feet tall when Chevalier was a child, the hedge today rises 22 feet. 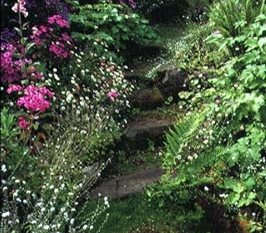 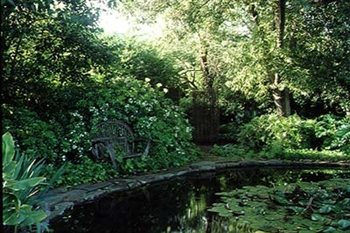 Few of us are lucky enough to have 70-year-old hedges, yet versions of Chevalier’s design ideas are applicable anywhere. Even a small garden can be parsed into rooms by imaginative placement of plants, paths, and objects. A single fruit tree or a well-positioned bench can draw the eye and anchor a space, though it takes time to figure out what works best where.

Chevalier’s garden is a continuing narrative, not a restoration of her parents’ garden. With a designer’s eye, she alters original elements to suit her own vision, borrowing from places she loves. “The hedges I let grow so they would remind me of the Generalife, in Spain.” Drawing in the ground with a stick, she redesigned the old swimming pool to make an ovoid pond. She kept the design simple and let the plants grow luxuriantly. Every room has a focal point, but the transit between rooms enhances the romance of the whole: an arch of roses, a willow gate that keeps out deer while accenting a visual corridor, and Australian tea trees and fir framing the upper garden. 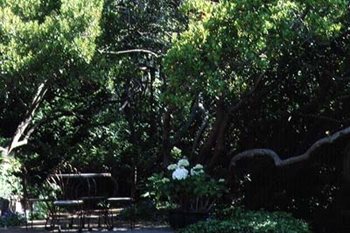 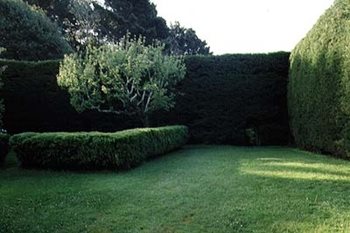 With the help of her gardener, Michael Guilkey, Chevalier is now training old roses covering a path by the house onto an arbor along a steep embankment. “Many people want to cut everything down to human scale, and shade is an anathema to them. I prefer a shady dell, a long vista leading to a sunny meadow. Variety and privacy and surprise.”