Make an Escape to the Gardens of Alcatraz

With good soil and carefully selected plants, a garden can thrive anywhere, even on the Rock. Alcatraz Island in San Francisco Bay has a delightful surprise in store for visitors who expect to see nothing but abandoned prison cells and a stark, barren landscape. They will also get to experience the Rock’s softer side—flourishing gardens, tide pools, bird colonies, and stunning views of the bay. Thanks to a decade-long partnership of the Golden Gate National Parks Conservancy, Garden Conservancy, and National Park Service, the historic Gardens of Alcatraz have been fully restored and are now alive with fragrant roses, fig trees, wildflowers, and colorful succulents. 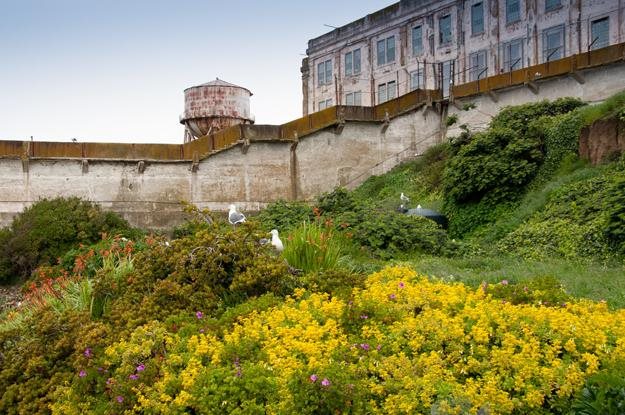 The gardens at Alcatraz needed tough plants that could survive with little water or care. Many of the species were imported from other Mediterranean climates and flourished despite 40 years of neglect after the prison closed. Today, volunteer crews from the bay area work with Garden Conservancy staff to help plant and maintain the restored gardens. Photo by: Elizabeth Byers.

“Our hope is that the beauty and complex nature of these gardens will become better known,” says Greg Moore, president and CEO of the Parks Conservancy. “The Alcatraz Gardens project is a tribute to those who tended the gardens in the past, as well as to those who work to preserve and tend them today.”

Alcatraz was first inhabited in the mid-1800s, when it was used as an army fortress and then transitioned into a military prison in 1861. In an effort to cultivate the barren island, the military imported soil from nearby Angel Island and the Presidio, and as early as 1865, army officers began planting Victorian-style gardens. In the 1920s, the military and the California Spring Blossom and Wildflower Association initiated an island-wide beautification project and prisoners planted hundreds of trees and shrubs and many pounds of flower seed. In 1933, when the Federal Bureau of Prisons took control of Alcatraz, they were surprised to find the island adorned by hillside terraces, a rose garden, and a greenhouse. Under the guidance of California horticulturists, inmates were permitted to continue working the gardens, and they eventually transformed the island’s western slopes. 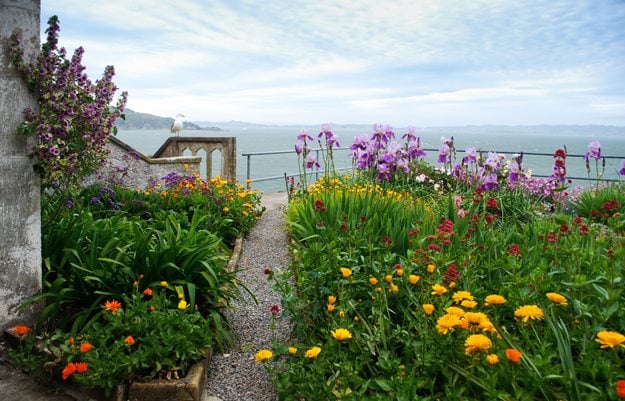 The officers’ row gardens provided cutting flowers for the guards living on Alcatraz. In this photo, Calendula, Centranthus, and bearded iris bring cheer to the Rock. Photo by: Shelagh Fritz.

After the prison closed in 1963, the gardens were abandoned for 40 years and the landscape deteriorated. In 2003, the Garden Conservancy, the National Park Service, and the Golden Gate National Parks Conservancy joined forces to restore the gardens to their original glory. The ambitious project included removing 40 years of overgrowth and decay, gathering historic documentation, and developing an ambitious volunteer garden program. More than 200 species of ornamental plants survived the long period of neglect and the challenging growing environment. Historic plantings that were lost have been replaced by new low-maintenance plants with water needs more suitable to the harsh climate conditions. 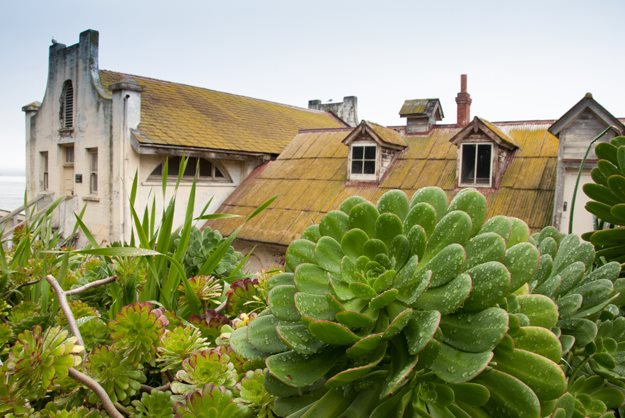 Many succulents, such as the Aeonium seen here, have been able to thrive despite the challenging environment. More than 200 species of ornamental plants survived the harsh growing conditions. Photo by: Elizabeth Byers.

“Vintage images and historical records of the Alcatraz gardens from the mid-1800s through 1963 help guide our continuing restoration efforts,” says Frank Dean, general superintendent of the Golden Gate National Recreation Area. “The Gardens of Alcatraz are a wonderful and unexpected surprise for the 1.4 million annual visitors to the island.” 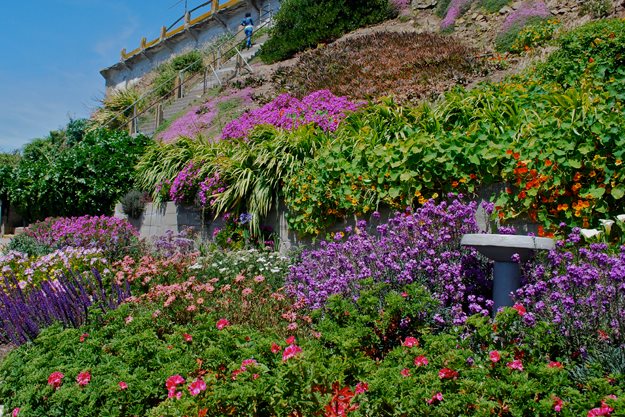 The Prisoner Gardens, on the west side of Alcatraz, were restored in 2009. The recreated birdbath is surrounded by Salvia, Pelargonium, Osteospermum, Erysimum ‘Bowles Mauve', and Tropaeolum. Photo by: Shelagh Fritz.

The Gardens of Alcatraz are open to the public year-round, but the best time for viewing is from January to September, especially during the spring. Seven key gardens have been restored, including the Main Road Landscape, Rose Terrace, Officers’ Row Gardens, Warden’s Garden, Prisoner Gardens, Cellhouse slope, and West Lawn and Terraces. Docent-led tours are available on Fridays and Sundays. For more information and to take a virtual tour, visit the Gardens of Alcatraz. 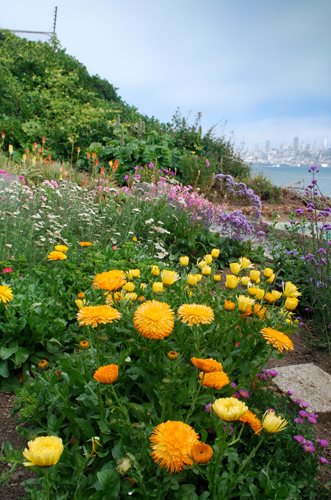 The gardens tended by the prisoners of Alcatraz became a refuge from the tensions in the cell house. A view of San Francisco can be seen across the bay. Photo by: Shelagh Fritz. 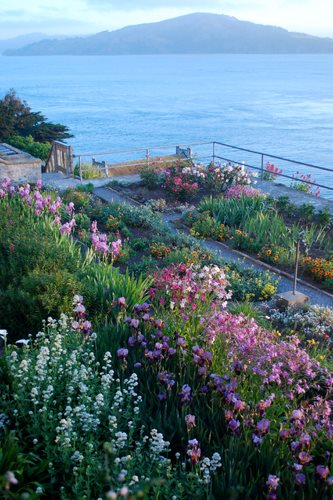 In the morning light, the Officers’ Row Gardens are awash in soft pastels, including white Centranthus, purple bearded iris, pink Nicotiana, and roses. Across San Francisco Bay is a view of Angel Island. Photo by: Shelagh Fritz. 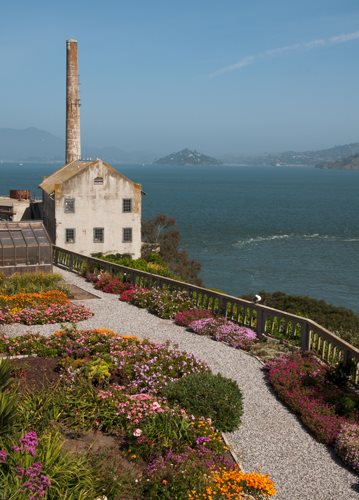 Rose Terrace and Greenhouse Complete with a new greenhouse, propagation tables, and composting space, the rose terrace is once again functioning as the center of garden activities at Alcatraz. Photo by: Elizabeth Byers.