Written by French botanists who explored North American forests in the late 1700s, The North American Sylva is a monumental work with masterful illustrations and extensive botanic profiles. The book would help France reforest its post-war countryside, and become a landmark in North American forestry. Today, it remains readable and interesting—certainly a work of evergreen value. 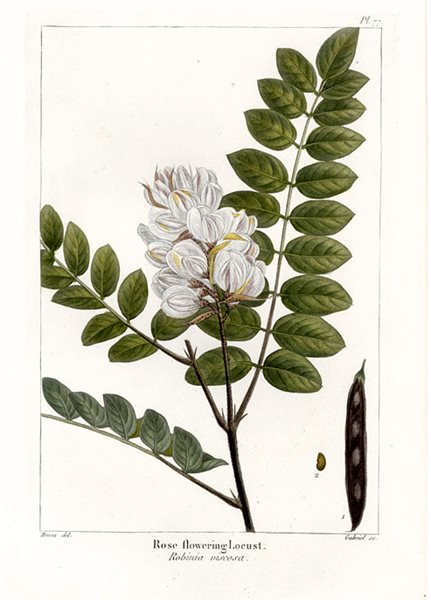 Under the direction of the French government, botanists André Michaux and his son, François-André, explored the forests of North America from 1785 to 1796. They were researching new tree species to repopulate the French countryside, whose forests had been depleted by war. With an eye for flora that would nurture Europe's post-war commerce and that could be successfully introduced into its ecologies, the French botanists produced lengthy species profiles—including local ethnobotanic uses, propagation techniques, and casual anecdotes.

Their collective work was published in two French collections (Flora Boreali-Americana (Paris, 1803) and Histoire des chênes de l'Amérique (Paris 1801)); a few years later, François-André returned to the United States to continue the project, and published a translated collection called The North American Sylva (Philadelphia, 1817-1819). The monumental work included illustrations by Pierre Joseph Redoute and Pancrace Bessa, both masters of botanical art, and was regarded as a foundation of American forestry.

Our gallery of selected trees from The North American Sylva includes several hand-colored lithographs and excerpts from Michaux's companion description. Useful and charming, the book represents an age of early botanic exploration and trade, told from the perspective of a Frenchman wandering amongst American trees and habits. The full book is here. 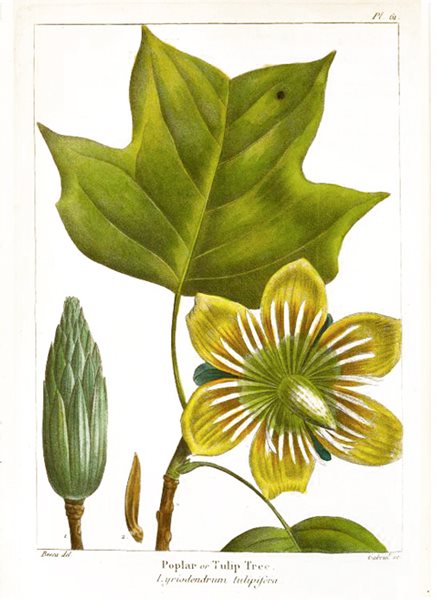 "This tree, which surpasses most others in North America in height and in the beauty of its foliage and of its flowers, is also one of the most interesting from the numerous and useful applications of its wood.

In the large towns in the United States, [the tree's] boards ... are exclusively used for the panels of coaches and chaises. When perfectly dry they receive paint well and admit of a brilliant polish. The vicinity of Boston does not produce this tree, and the coach-makers procure it from New York and Philadelphia.

In the spring, [the flowers] are gathered by the women and children in the neighborhood of New York, and sold in the markets of that city." 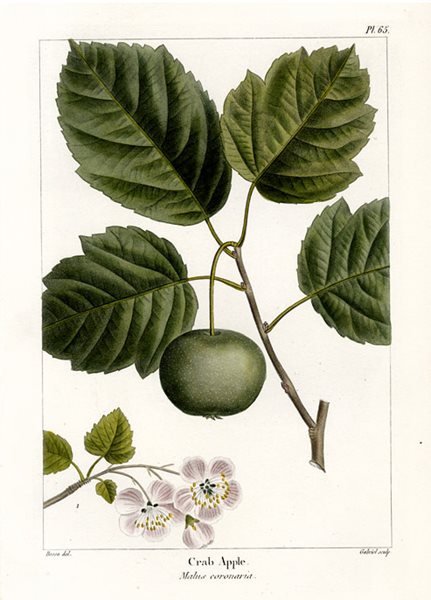 "Some farmers make cider of [the apples], which is said to be excellent; they make very fine sweetmeats also, by the addition of a large quantity of sugar.

No attempts have been made in the United States to improve the fruit of the Crap Apple Tree, nor any experiments of uniting it, by grafting, with the species imported from Europe. These [European] species succeed so perfecty, and furnish such excellent new varieties, that much time would be spent upon the Crab Apple, without bringing it to as high a state of improvement." 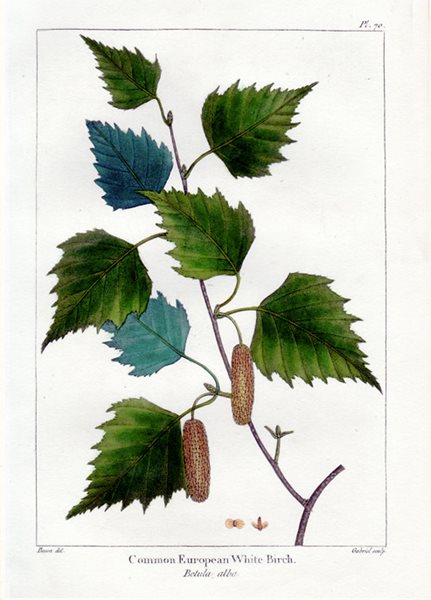 "Nothing contributes more to the success of the seeds than previously burning the noxious herbs and bushes growing upon the ground. It is observed in the north of Europe and of the United States, that the Birch reappears, as if by enchantment, in forests that have been destroyed by fire.

I have entered these details concerning the propogation of the Birch, because, among the trees of the Old Continent, it is one of the most profitable for cultivation upon poor lands." 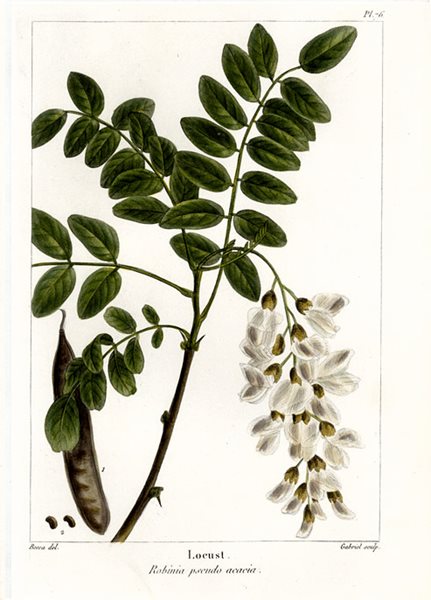 "One of the first trees introduced into Europe from the forests of North America east of the Mississippi, was the Locust. For the acquisition of this tree, still more interesting for the excellent properties of its wood than for the beauty of its foliage and its flowers, we are indebted to J. Robin, a French botanists, who received it from Canada, and cultivated it on a large scale, in the reign of Henry IV, about the year 1601.

I have observed ... that its vegetation is accelerated by the warmth of a more southern sun: the effect is visible even at Orleans, where, though the difference of latitude is only one degree, the Locusts are larger than in the vicinty of Paris." 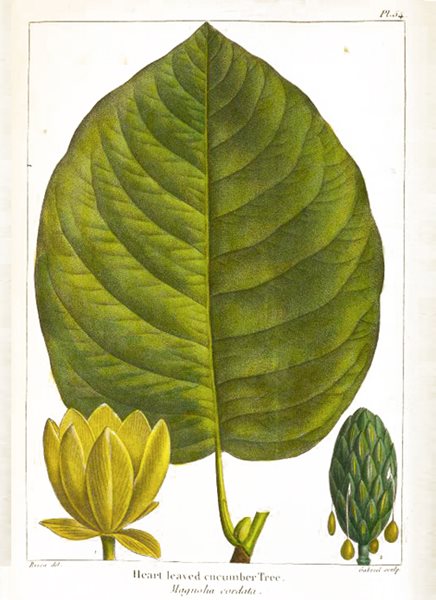 "This species of Magnolia, which, in its general appearance and in the form of its fruit, very nearly resembles the preceding, has been confounded with it by the inhabitants of the regions in which it grows; hence, it has received no distinguishing name, and, to supply the defect, I have given it that of Heart-leaved Cucumber Tree.

The beauty of its yellow flowers, which form an agreeable contrast with its luxuriant foliage, and the advantage of resisting an intense degree of cold, are its only recommendations to amateurs; but in this respects it deserves, as well as any species of the genus, to figure in parks and gardens." 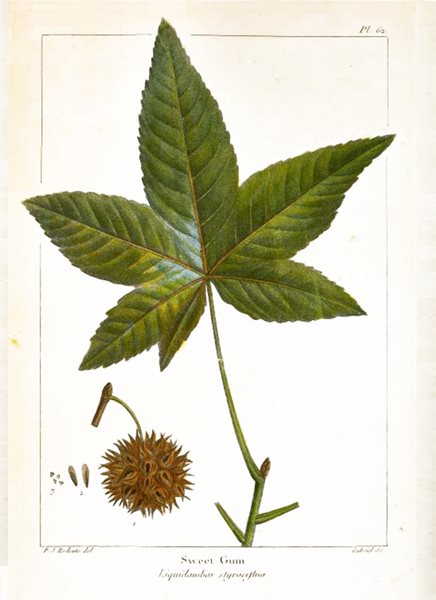 "The Sweet Gum is garnished with fine foliage, which changes to a dull red with the first autumnal frosts, and falls soon after. The shoots upon which the young leaves appear in the spring are smooth and of a soft yellowish-green color ... In warm weather, a viscous substance exudes from the leaves ... when bruised, they exhale a sensible aromatic odor.

In Europe, this tree has for many years grown in the field; but, though it exceeds the height at which it fructifies in the United States, it has not yet yielded seed, and for this reason is not extensively multiplied. It deserves to be generally diffused in parks and gardens, on account of its agreeable tint and singular form of its leaves." 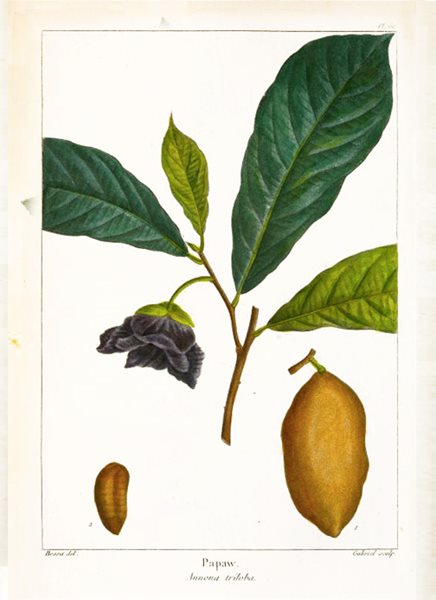 "[This is the only fruit of a trropical appearance we possess in the Middle States, and deserves more general consideration. I have purchased the fruit recently in the markets of Cincinatti and Pittsburg [sic], where it is esteemed.]

When the fruit is ripe, which takes places towards the beginning of August it is about three inches long and an inch and a half thick ... swelling into inequalities. Its pulp is soft and of an insipid taste, and it contains several large, triangular stones ... At Pittsburg, some persons have succeeded in making from it a spiritous liquor; but, notwithstanding this experiment, very feeble hopes can be entertained of cultivating the tree with profit for this purpose."