Our columnist Kevin Lee Jacobs shows how he created a shade garden and a bit of woodland reverie in his garden, complete with an outdoor "dining room," and edged with three seasons of flowering plants. 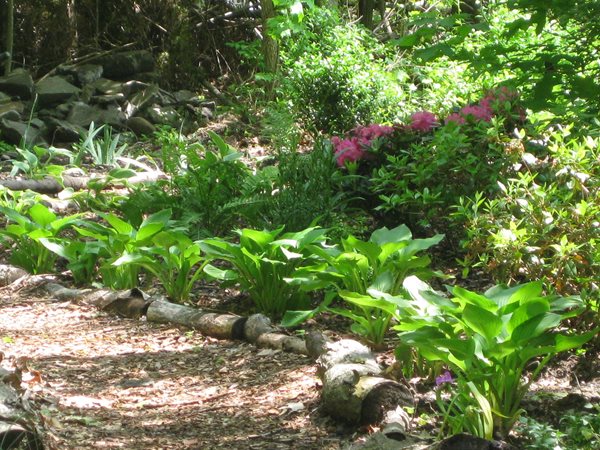 Years ago, my woodland garden was not a garden at all. It was a jungle of wild sumac, aggressive vines, and thorny brambles. You couldn’t pass through the area without the aid of a machete and a can of bug spray.

But, clearings were made, paths were constructed to create a sense of mystery in the garden, and the addition of a gurgling pond, comfortable seating, and colorful woodland plants all contributed to making this former eyesore a wonderful and shady retreat.

Now, before this thicket could perform its Cinderella act, it had to be cleared of weeds and debris. By “debris,” I mean hubcaps, old tires, beer cans, and other trash deposited there by the previous owner. I also removed from the site about 80 wild sumac trees. Sumac, if you have never encountered it, is the weediest of all weed trees. But sumac is soft-wooded and shallow rooted, and therefore not too difficult to saw down and then dig up.

What remained after this thorough cleaning were native shade trees, including maples, oaks, and catalpas, and native shrubs, too. 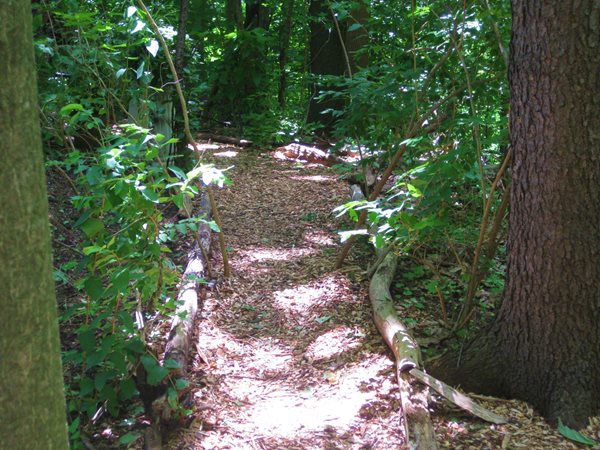 An air of mystery is essential to a woodland setting. For instance, paths should never be straight. They should be curved, and rather sharply, too. This invites a visitor to meander slowly through the garden, in order to discover what lies beyond each and every bend. My paths are framed with fallen branches (and cut-up sumac—at least it’s good for something), and paved with wood chips. 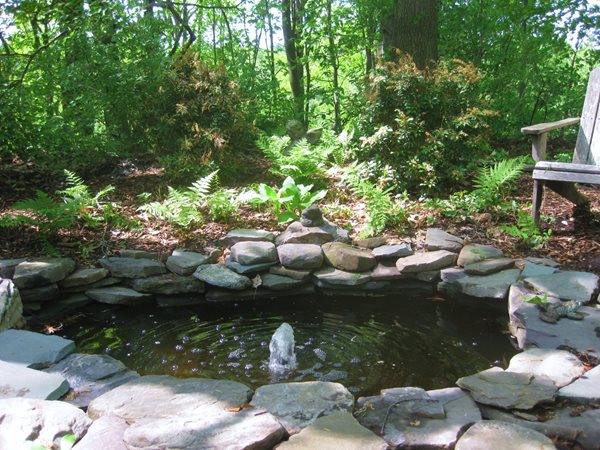 I made a little pond in my woodland by paying a brawny friend to dig a three-foot-deep, four-foot-wide hole. He lined the cavity with leftover roofing material I had in a shed, and filled it with water. Because mosquitoes are drawn to still water, I submerged a small pump in the pond, which keeps the water moving and well-aerated.

In an aerated pond you can have the joy of goldfish and koi. I gave the pond to 25 such fish and they have discovered I’m their food provider, and now rush to the edge of the pond whenever I approach. Besides fish, there are birds, frogs, and chipmunks who enjoy the gurgling pond as much as I do. 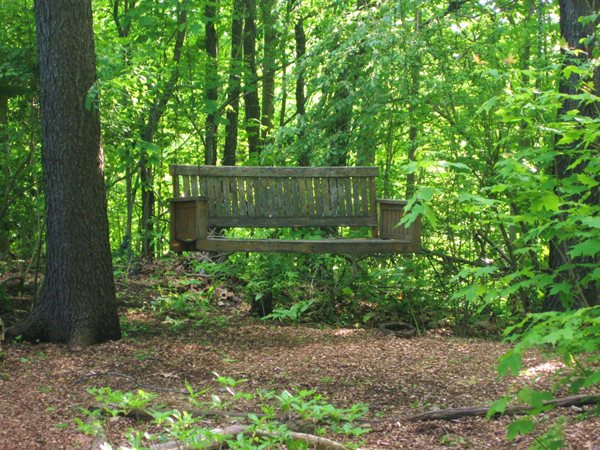 As for seating, I chose two comfortable, slanted-back Adirondack-style chairs, and placed them next the pond. A small wooden table, placed between the two chairs, is useful for holding drinks.

Although a hammock seemed appropriate for this restful place, I failed to find one in an unobtrusive color. Consequently I settled for the next best thing—a slatted wood swing. The swing is suspended between two strong maple trees. It overlooks a bed of New York ferns (Thelypteris noveboracensis), interplanted with pink and red Primula japonica. 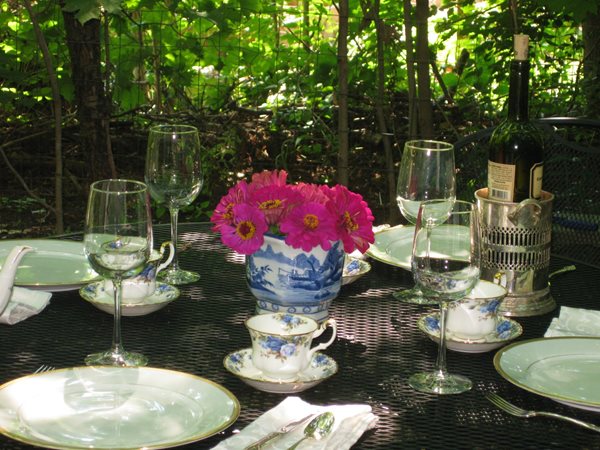 Within the woodland, but completely disguised by maple saplings and wild honeysuckle, is the “secret garden.” To make this circular-shaped “room,” I simply cleared a patch of weeds, laid down wood chips for a floor, and then placed a table and six chairs there. In the summer, I like having dinner with friends in this dim, natural setting, while seated at a table that is laid with linen, candles, crystal goblets, and my best china and silver. That’s my idea of “dining in the rough.” 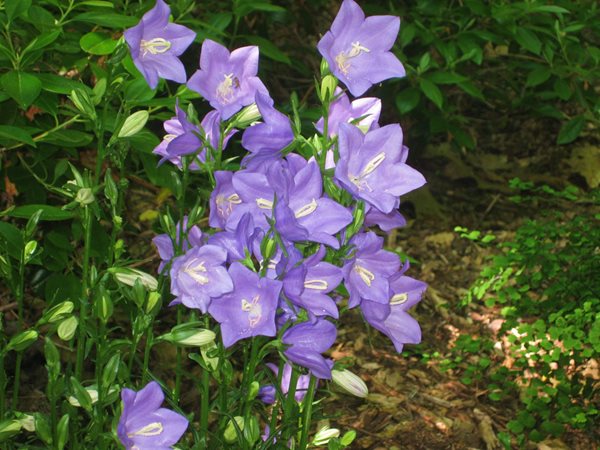 To provide the garden with three seasons of beauty, I planted the sides of paths with shade-tolerant perennials. That’s Campanula persicifolia ‘Takion Blue’ pictured here. This two-foot tall bell flower puts on a big violet-blue show in late May; flowers appear on and off again until frost. I have it in a bed that is edged with the colorful Hosta ‘Wide Brim.’ 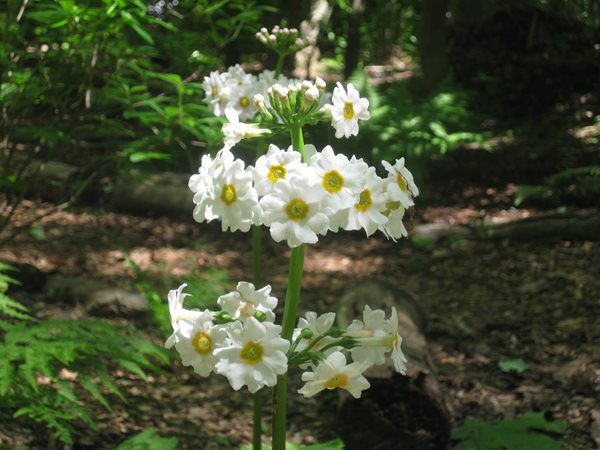 Indispensable in a woodland setting is the pink, red, or white Primula japonica. Here in zone 5b, its candelabras of bloom appear in mid-May, and sometimes continue through mid-July. The plant reseeds itself yearly, providing its soil isn’t disturbed. 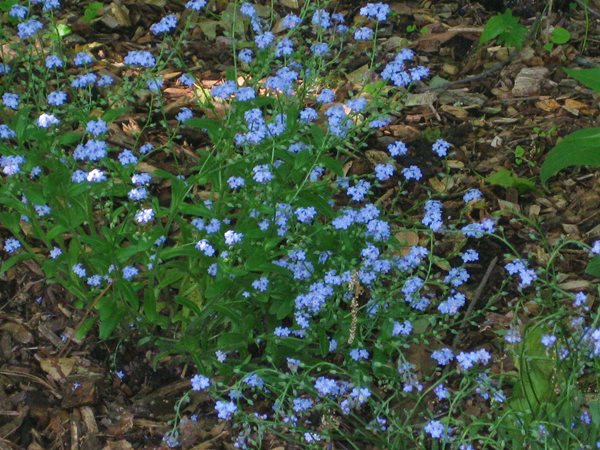 For a touch of true blue, I relied on the common Forget-Me-Not.

Note: This woodland forget-me-not (Myosotis sylvatica) is invasive in some areas, see where. 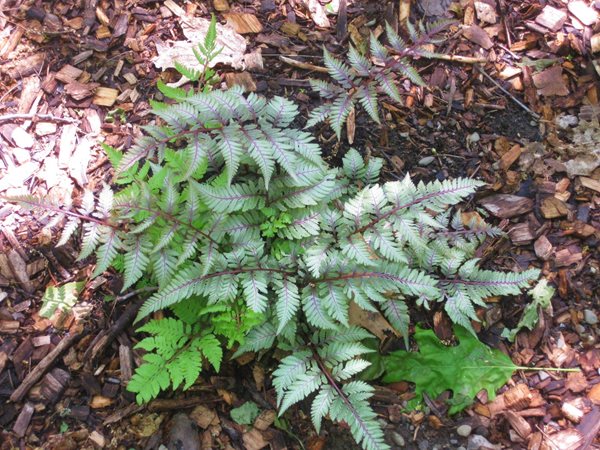 No woodland garden is complete without ferns, and you can have great fun selecting varieties. I planted large sweeps of the lacy-leaved, native New York fern (Thelypteris noveboracensis) and the somewhat-evergreen Christmas fern (Polystichum acrostichoides) as groundcover. Also nice to have is the ‘Ghost’ fern, pictured here. When viewed at night, this Athryium gleams with eerie iridescence. 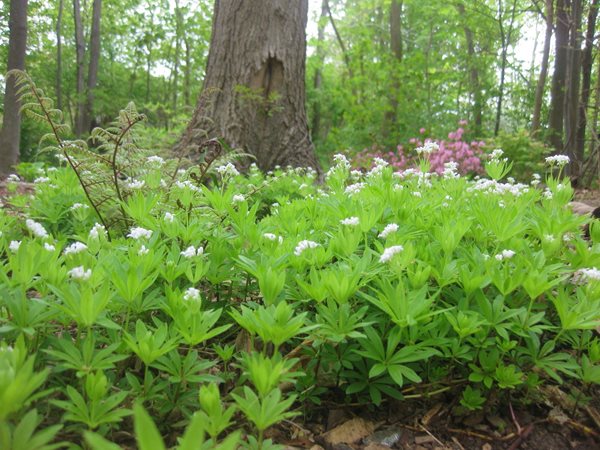 Sweet woodruff, or Gallium odoratum, makes a particularly effective woodland groundcover. I have it in a small bed beneath a wild cherry tree. Its tiny white clusters of bloom appear in May. Incidentally, if you cut a few flowering stems of sweet woodruff, and let them steep overnight in a bottle of crisp Reisling, you’ll produce a delicious infusion called “May Wine.” This German-inspired “punch” is part of the ancient tradition of the maypole, an annual ritual that brought together unmarried women and men. Both the flowers on the maypole and the fresh herbs in the wine honored youth and springtime. 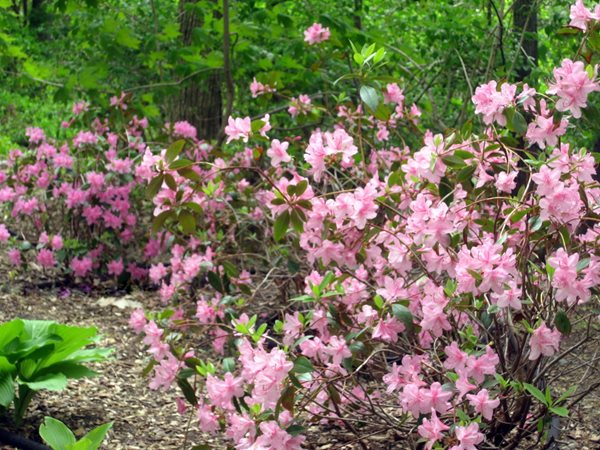 Other flowering plants and shrubs in my garden include rhododendrons, hellebores, astilbes, and Virginia bluebells. All these thrive happily beneath the garden's canopy of maple, oak, wild cherry, and catalpa trees. In June, the catalpa sheds beautiful, orchidlike flowers. Its blossoms are white, with violet veining.

That’s the story of my woodland garden, a magical place that beckons when the weather turns hot and humid in summer. There, shady conditions, comfortable chairs, and a gurgling pond all contribute to a sense of cool comfort, whether one sits, strolls, or gently swings. I hope you’ll consider making such a romantic retreat in your own back yard.

Kevin Lee Jacobs blogs at A Garden for the House. He was introduced to gardening when he was no taller than a delphinium. Today, his home in upstate New York features formal rose gardens outdoors and lavish window gardens indoors.