The story of the King Street Lots, public gardens that flourished for 13 years in an series of abandoned lots in Red Hook, Brooklyn, New York. By Laura Harmon

More than a decade ago, a garden began to take shape on a couple of adjacent vacant lots on the corner of Van Brunt and King Streets in the Red Hook neighborhood of Brooklyn, New York. At the time, Red Hook was an area with a few less residents, one less IKEA, and several more vacant lots than exist today. 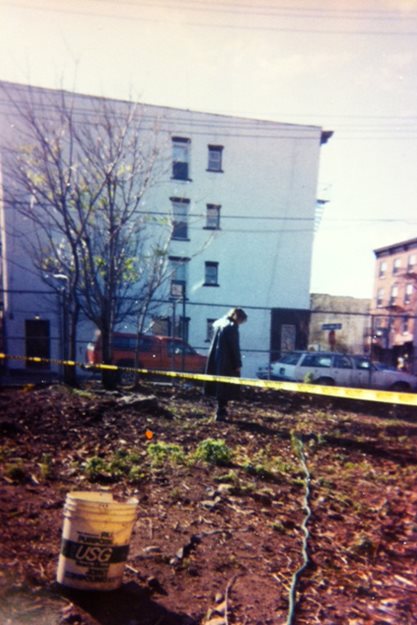 Starting a garden on a vacant lot is essentially no different than starting a garden anywhere else. It requires the collection of materials and continuous maintenance. Some gardeners are granted permission to plant on lots awaiting development, while others are essentially squatters taking advantage of someone else’s neglect. 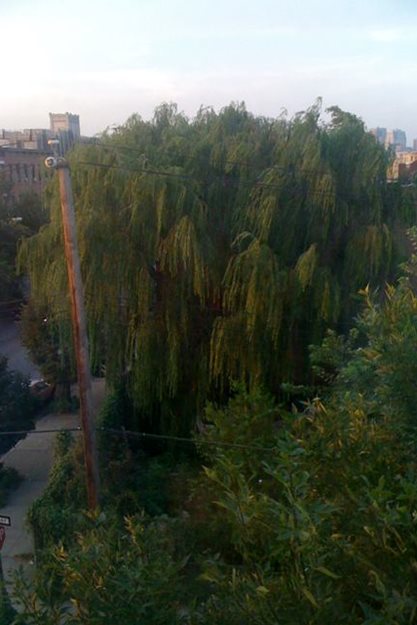 For years, wild urban plants, having adapted to the disturbed site conditions, blanketed the King Street lots. These uncultivated plants improved the quality of the soil and provided foraging fodder and a habitat to insects, birds, and small mammals, yet it was an unwelcoming landscape to most humans.

In 1998, the owner of the King Street lots allowed a neighbor to clear the overgrowth and start a garden. The buildings that once stood there were long gone, but their foundations lay beneath the debris and decaying plant matter that had accumulated over the previous years of neglect. 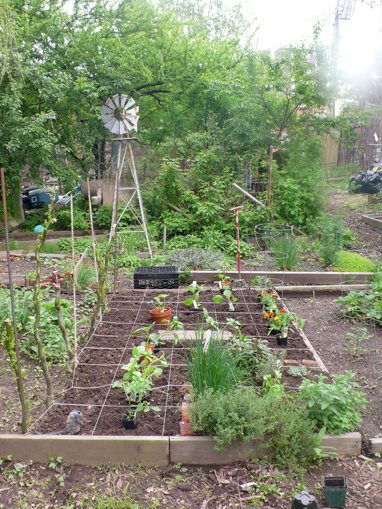 A Salix alba was planted alongside one edge of the lots to help prevent flooding in the basement of a neighboring house. Today the tree stands nearly sixty feet tall, offers flood mitigation, and provides much appreciated shade to garden visitors during hot summer days.

Fruit trees were placed across the lots and ground covers were planted to discourage weeds. Bricks were salvaged from the old foundations and were made into retaining walls that added shape and provided pathways and seating. An old perforated washing machine drum was donated and became a fire pit. The derelict land began to take shape as a place for meeting and resting, and through consistent effort, it became a garden. Upon the addition of healthy soil, vegetable gardening later became the dominant plantings in a neighborhood still lacking a easy access to fresh produce. 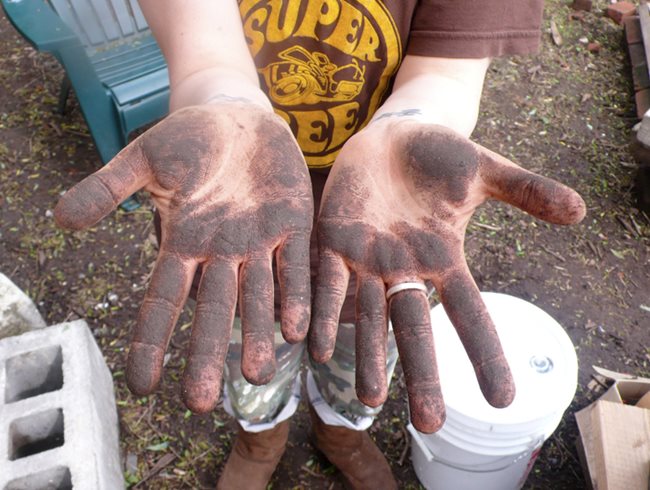 Gardeners came back season after season to tend to individual plots and to help the maintenance of the communal areas. Dues were established for the users of each garden plot to share the burden of paying for necessities such as garden tools, coolers, and to pay for the neighbor’s water bill.

Each gardener had a particular way of growing. Some took the more chaotic approach and spread seeds erratically, relying on the whim of the rain and sun to fashion a garden. Others meticulously weeded, watered, and pruned. All were reflections of the individual characters doing the sowing.  Perhaps the singular collective imperative was “not to see anything die on the vine,” meaning that if you saw a fruit on anyone’s plot that was on the verge of rotting, it was considered fair game to take it and eat it yourself. 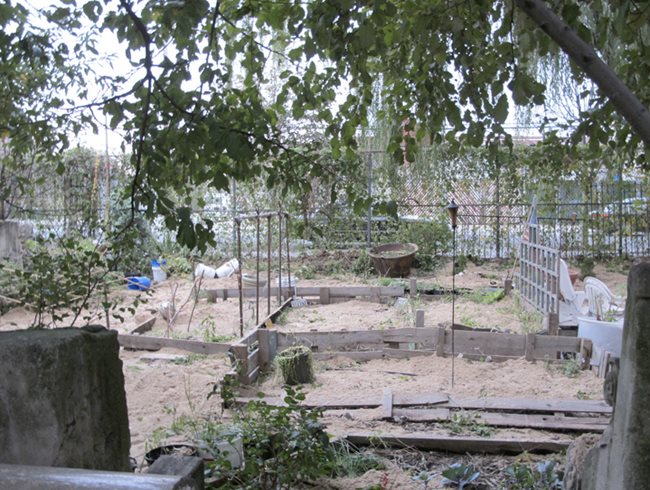 The King Street Garden was established on tenuous terms—it was formed and maintained despite the knowledge that at any moment the property might be developed, and the garden destroyed. As the population and development of Red Hook grew over the years, a sense of anxiety about the future of the garden also grew. Always looming in the back of the gardeners' minds was the fact that the lots could be taken away from them at any time. Undeterred, and perhaps even incited, by the indeterminate timeframe within which to operate, the gardeners forged on.

Recently the King Street Garden’s gates have been fortified with a new lock. The beds have all been covered with sand, and the landowner has finally, after 13 years, reclaimed his property, hoping to sell the lots for future development. 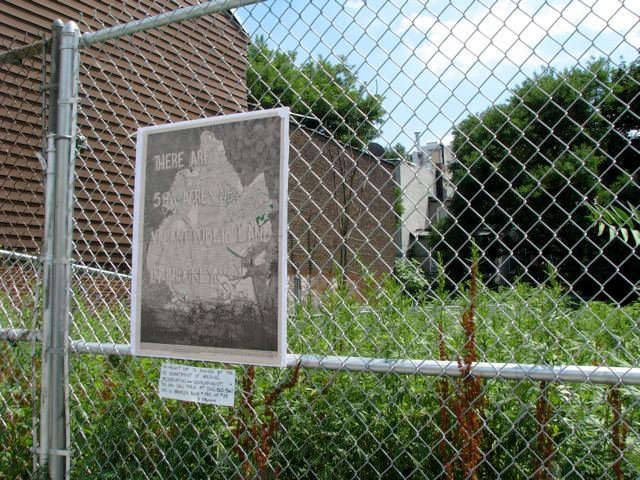 As the gardeners mourn the garden they once nurtured so tenderly, they also mourn their place of collective ritual, as more than just plants were lost. Planting a garden is also an investment in the future, and in this case it was a shared investment. No more yearly Independence Day crawfish cookouts, no more weddings, and no more harvests will be celebrated at the gardens.

What I can’t shake is the feeling that what was so truly special about the King Street Garden was its ephemeral quality and yet realizing that gardening for any period of time was worth the effort. I like to think that the impermanence of the garden created fertile grounds for experimentation.  With nothing to lose, the gardeners had everything to gain. The success of the garden was due to the gardeners’ commitment year after year, to keep growing, despite the odds. 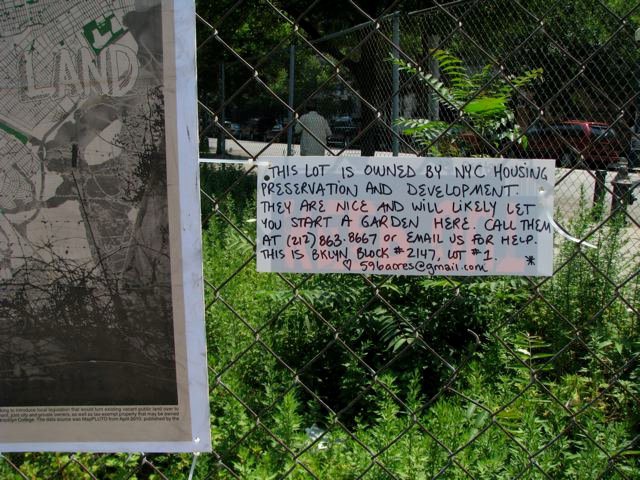 For anyone interested in reclaiming a vacant lot in their neighborhood in Brooklyn, New York for use as garden, consider contacting 596 Acres. The organization is named for 596 acres, the amount of vacant public land in Brooklyn, as of April 2010. 596 Acres is a public education project aimed at making communities aware of the land resources around them. Thanks to the Center for the Study of Brooklyn, 596 Acres has learned that many of these lots are actually publicly owned and are developing a platform for negotiating interim and long-term community uses for this warehoused public space.

Maps are currently being distributed, with directories of where vacant public land and its ownership to local citizens. These maps are also being afixed directly to the lots in question, with contact information of the owner agency.