Textile designer Jack Lenor Larsen brings an eclectic sensibility to his lush public garden in the Hamptons. By Lise Funderburg

Jack Lenor Larsen has been gardening for 80 years, but he readily admits that he is no plantsman.

“I don’t know botanical Latin and I’m not an expert on plants,” says Larsen, who turned a 16-acre parcel of wildly overgrown and flat, flat, flat farmland into a personal retreat and public garden nearly three decades ago. Set up as a nonprofit from the start, LongHouse Reserve in East Hampton, Long Island, is a magical, quirky, and welcoming series of spaces that attract an ever-expanding audience, from busloads of school kids to the area’s estate crowd. Clearly, all are better off for LongHouse’s creator not having gotten bogged down by whether pteridophyta would be considered cryptogamia or phanerogamia. 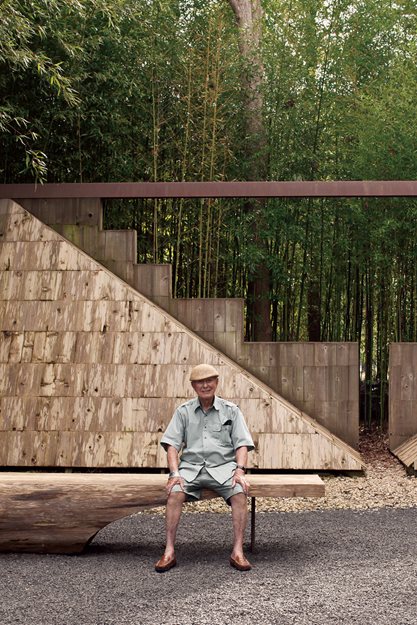 Textile designer Jack Lenor Larsen brings an eclectic sensibility to his lush public garden in the Hamptons. To the left, Jack Larsen sits on a sculpture made by John Houshmand; behind him is “Bridge Summer” by the artist Claus Bury. Photo by: Ingalls Photography.

“I do landscapes,” explains Larsen, a renowned textile designer and weaver, as well as an enthusiast for all manner of culture, craft, and art. And what landscapes they are: There are great lawns and allées; smaller gardens focused on strolling, grasses, or single colors; and a bermed-earth amphitheater built from the diggings of a vast lily pond. Imported sand covers dirt-based “dunes,” and sculptures are everywhere—next to fountains, up in the trees, adjacent to the croquet court. Clearly LongHouse evolved out of a personal and entirely idiosyncratic perspective, unfettered by conventional wisdom.

Larsen reports that he has been enamored of plants since age 3, when he grew his first crop of radishes in Seattle, Washington. That love of working with organic matter has steered his career as well: Larsen abandoned plans for architecture school once he was exposed to weaving, eventually earning a master's degree from the Cranbrook Academy of Art. He moved to Manhattan to launch his career, and one of his earliest professional breaks came in 1952 when Knoll, the famous furniture design company, rejected him.

“Mrs. Knoll decided I was too individual to fit her mold,” Larsen has said. Left to his own devices, he started his own company and built a clientele that included architect and designer Marcel Breuer, and Dansk, Mikasa, and Pan Am, to name a few. Larsen traveled extensively throughout his career, and that global perspective courses through the LongHouse property. The idea for the amphitheater was prompted by flying over Ireland and looking down at the ancient land forms. “I’ll do that here,” Larsen said to himself, and cleverly used the dirt excavated in order to install a large lily pond at the property’s center. The house, which Larsen designed, spent seven years building, and still occupies, was patterned after a 7th-century Japanese shrine perched on stilts. “You get breezes and a view,” Larsen explains. (Larsen’s previous home, the Round House, occupied an adjacent property and derived its shape from the clustered Ndebele huts Larsen saw in South Africa’s Transvaal province.)

Larsen initially bought the LongHouse land as a defensive maneuver, a way to stave off encroaching development. But he couldn’t resist the blank slate of it — blank, that is, once he cleared off 6,000 unwanted trees. Just as he’d done with his previous home, he opened his gardens to the public, although this time around he set up its nonprofit status from the start.

By following his own creative urges and inviting in his own vast circle of artists and craftspeople, Larsen hoped to inspire others. “The main message,” he says, “is that you can be different, you don’t have to look like everyone else. Our homes are our one chance to be individual in this mass culture.” 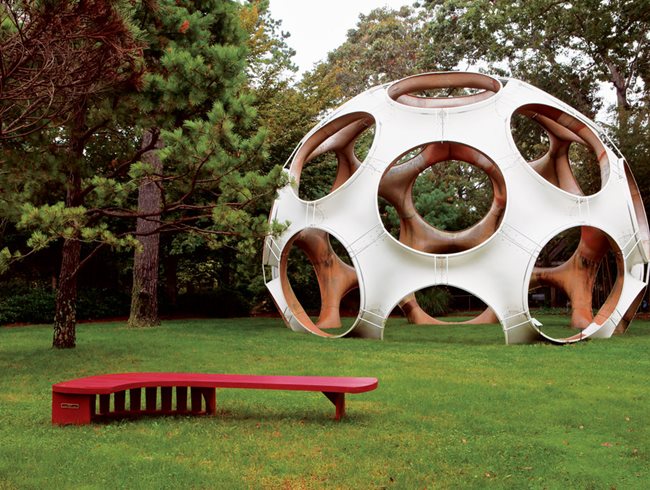 The Reserve’s sizable sculpture collection comprises donations, purchases, and loans placed in relationship with nature, often using it as a dramatic counterpoint to vegetation. That unconventional approach to showing art is mirrored in the way Larsen uses plant matter, says Dennis Schrader, who recently became a board member and is the owner of Landcraft Environments, a nearby nursery that specializes in tropical plants.

“Jack’s not afraid to try things,” Schrader says with admiration. “He did a mini allée of blue bird’s nest spruce grafted onto a pole. Usually people try to work them into rock gardens as specimens, but he had them in a row along a path, and that was very effective.” Schrader is also a fan of the amphitheater, which he calls a “nongarden,” since it’s planted with nothing other than grass. “It’s unexpected and very simple,” he says, “a nice place to sit and reflect.”

Lay visitors and gardening-world insiders aren’t the only ones who take something away from their time at LongHouse. Landscape painter April Gornik has visited repeatedly and describes it as “a wonderful marriage of worldwide cultures.” Musician Laurie Anderson performed there in 2010. “It was a dream to play in Jack’s garden,” Anderson remembers. “The sounds of the piano and the violin didn’t ricochet against the walls but went drifting off through the leaves into the night.”

In addition to hosting concerts, LongHouse held its fifth annual “On + Off” competition for unique planter designs this past spring, and Larsen has led many tours abroad, including to Japan, his favorite country and a clear inspiration for much of his gardening aesthetic.

“I go to Japan every year,” he says, “and they’re not much into flowers. There, it’s texture and composition and understatement.” Larsen’s current motto for the garden is that “elegance derives from subtraction.” Indeed, he says he is constantly having things moved from one place to another, and that the gardening staff have become experts in balling and burlaping large trees and shrubs. 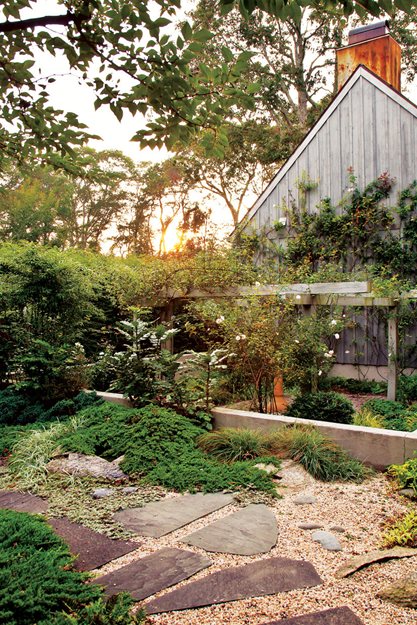 Ron Rudnicki’s installation “Angles of Repose” uses hardscaping as mixed media. Behind it, the rose garden and the Reserve’s office, which has 'White Dawn' climbing rose on its wall. Photo by: Ingalls Photography.

“As a designer,” he says, “I compose plants somewhat related to the size they are. And even after all these years, I can’t figure out that this bush is going to be huge after a while. So we keep moving things.” There is always a new project at LongHouse, but whatever it is, it’s sure to be rich in texture and color combinations, two hallmarks of the garden.

“I like to say that his work here on the ground is just another tapestry, another weaving,” says Matko Tomicic, LongHouse’s executive director. Tomicic first came to LongHouse 16 years ago to help with the installation of an exhibition of Dale Chihuly’s glass sculptures, and was instantly drawn to the creative spirit of the place. “I came and I never left,” he says. Organizationally, LongHouse is poised to outlive its founder. But that day may be long in coming, one hopes, given Larsen’s tremendous vitality and enthusiasm for his chosen task.

“I slowly learn,” he says with charming self-deprecation. “I don’t want to ever finish here.” Indeed, his latest inspiration is from a house in neighboring Southampton, where he saw 20-foot-tall hedges made of black beech. “We’re doing another area next year,” he says, “and somehow I’ll have to work that in.”