Artist Robert Irwin designed the gardens at Dia:Beacon and the result is a beautiful echo of both the building—a former factory—and the art inside, including works by Richard Serra and Donald Judd. By Katie Mendelson

This past weekend, I went to visit Dia:Beacon for the first time. The museum, which features art from the 1960s and onwards in a former box printing factory, is huge, with room after room devoted to monumental works of art that would be difficult to fit in many other museums. 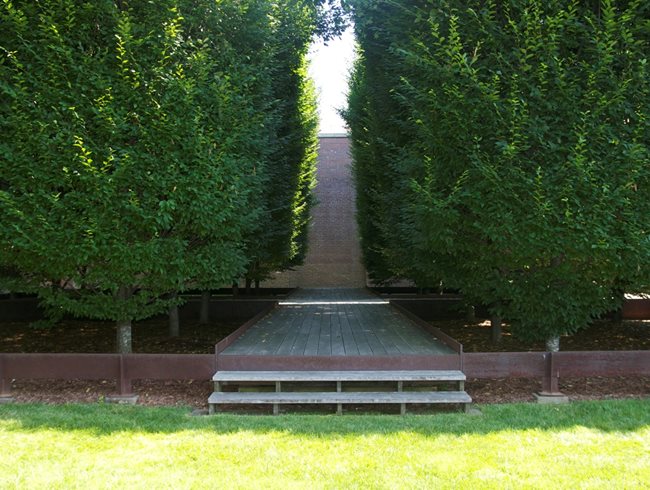 Work that might otherwise be lost in a conventional setting is part of a greater context at the Dia, with Donald Judd's fifteen plywood boxes—a play on variations on a theme—reminding me of Walter De Maria's Silver Meters, a long march of silver and gold plates down a narrow gallery at the front of the museum.

I have always been awed by Richard Serra's Torqued Ellipses, made up of giant canyon wall-like pieces of curved steel, but when I saw the Ellipses after Joseph Beuys's Brazilian Fonds, Beuys's almost claustrophobic felt and metal sculptures, and the immense depths of Michael Heizer's North, East, South, and West, (above) I had a much a better sense of how Serra, Beuys, and Heizer were all part of the same 20th-century spectrum. 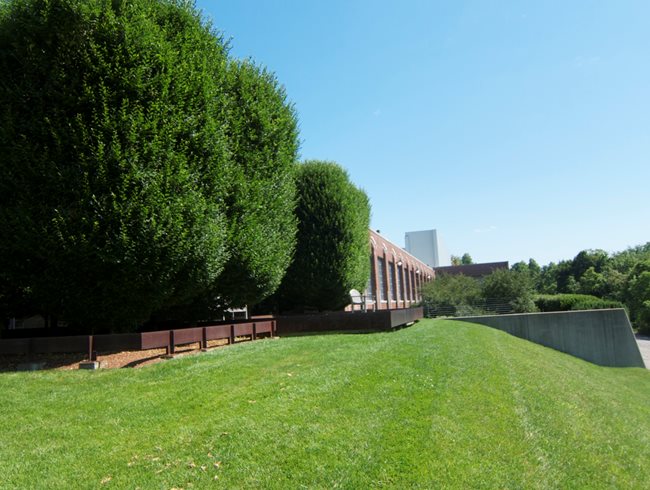 You can see the tops of the cherry trees in the background of the photo. Photo by: Claire Lui.

The gardens at Dia:Beacon were designed not by a landscape architect, but by artist Robert Irwin. After spending several hours inside Dia, I was able to see that the gardens were a direct extension of the art and the building itself. Four quadrants of hornbeams outside the museum are a living and breathing echo of the rhythm and cadences of the work inside—the squared-off shape of the trees, the sturdy repetition of the trunks, and the changing perception of light and shadows when I walked through the trees. Metal edges for the planters also were a reminder of the metal parts on Beuys's Brazilian Fonds, art pieces named for plants, but made of felt, and of the curved metal of Serra's Ellipses.

The long rolling lawn alongside the hornbeams is adjacent to a side garden of the museum, where cherry trees form two long rows—themselves forming lines parallel to the long interior galleries. On the west side of the museum, Japanese barberry* fills out tiers of planters that abut the huge gallery space for the Serra sculptures, once again a play on the boxy cubes of hornbeams and Judd's fifteen wooden boxes. 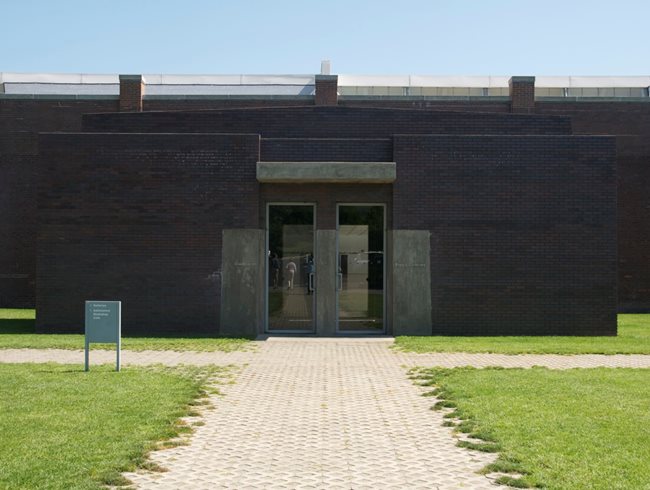 The walkway to the museum is lined with concrete pavers filled in with grass that has grown to cover most of the concrete in wide swaths, but then bursts in staccato diamonds along the edge of the walkway, forming a pattern of gray lattice work interrupted by the pointilist dots of grass. The idea of alternating opacity and clarity is repeated inside, where Irwin replaced panes of frosted glass with panes of clear glass, framing the verdant outdoors from indoors.

Irwin said in an interview with the New York Times, ''I lived in a little town across the river for a year, and went there every day,'' Mr. Irwin said. ''I work experientially. I start in the space and walk through it a thousand times, just sort of running my hands over the whole thing," and the resulting landscape shows the touch of a man who lived with the building and its artwork every day and created a garden in the same spirit.

*Though Japanese barberry is considered invasive, and from a gardening perspective, rather than a design perspective, perhaps not the best choice.