When Ella Fontanals-Cisneros asked Raymond Jungles to design a garden for her high-rise rooftop, the Miami-based landscape architect accepted the offer, even though he rarely takes on such projects. “Rooftops are a whole other animal and not for the faint of heart,” he says. “But I wanted to work with Ella again, because she is such a supporter of visual art and design. I was also excited about the challenges the project presented.” 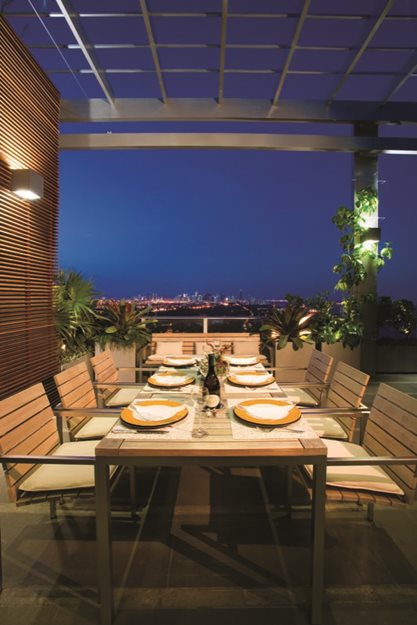 The dining set by Henry Hall Designs continues the theme of strong horizontal lines, which are used throughout the garden. Lighting on the pergola is by LED Starbrite. Photo by: Jon Whittle.

Towering more than 30 floors above Coconut Grove’s main boulevard, the rooftop overlooks Sailboat Bay and Miami’s cityscape. Fontanals-Cisneros—a philanthropist, entrepreneur and founder of two nonprofit art institutions in Miami—loved the awe-inspiring vistas, but she also wanted her garden space to feel private and protected. “I told Raymond I wanted greenery all around the border of the terrace,” says Cisneros.

Jungles and his design team set out to make the L-shaped, 2,500-square-foot rooftop garden feel both open and intimate, with areas for relaxing or entertaining. Natural materials—especially wood, stone and water—give the space an earthiness that counterbalances its up-in-the-sky location and the building’s white walls and beams. Jungles also relied on lots of horizontal lines: in walls, a pergola and other elements. “I wanted to bring the emphasis down to eye level, to make the scale of the space feel more human,” explains Jungles. Fontanals-Cisneros affirms that he did just that: “He captured very well what I wanted. We had a very good understanding throughout the process.”

Inhospitable weather conditions also presented distinct challenges: South Florida has relentless sun and heat, and winds that can be fierce on high-rise rooftops. Jungles addressed those limitations with plants that appear lush despite being drought tolerant and low maintenance. Bromeliads were at the top of Fontanals-Cisneros’ wish list because of their tropical textures, especially the broadleaved types. Other key plants include succulents and Florida natives such as coontie (Zamia pumila) and golden creeper (Ernodea littoralis). 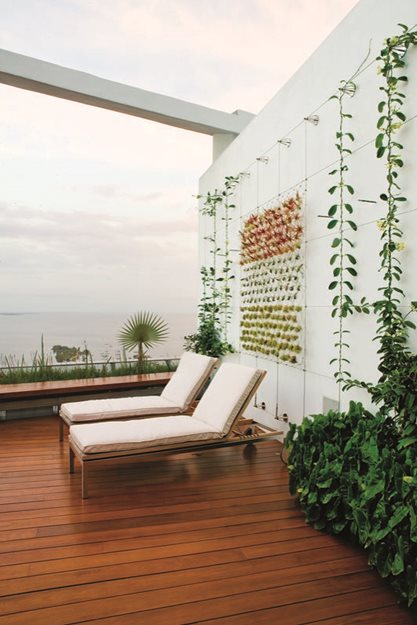 Chaises lounges near the pool are by Henry Hall Designs. A botanical installation by Jennifer Davit includes three species of Tillandsia growing on a stainless-steel screen. Photo by: Jon Whittle.

The main element that Jungles had to factor into his design was an existing pool that was 14 feet long by 11 feet wide and rose about 4 feet above the floor. He made it more functional and visually pleasing by adding more than 8 feet to its length. At one end, a wide “lounging ledge” shimmers as the sun casts light on multi-colored Bisazza glass tiles. The ledge’s design features two turtles, a playful touch that Fontanals-Cisneros requested. Water flows over the other side of the pool along a disappearing “infinity edge.” Jungles wanted the pool to have “an ethereal quality and to create a seamless transition with the view.” Fontanals-Cisneros enjoys how the falling water makes the pool seem more like a fountain.

To make the pool feel less obtrusive within the space, Jungles designed stepped ipê platforms around it. Ipê decking also serves as the raised floor in this area of the terrace. “It was the only wood we could use that would stand up to the harsh elements of this environment,” says Jungles. “We also wanted to tie the rooftop space to the ubiquitous use of exquisite wood in the interior rooms of the apartment.” Fontanals-Cisneros adds: “It makes the inside and outside work with each other.”

A water wall, made of stacked black-pearl basalt, forms a subtle backdrop for the pool. Heightening the wall’s textural quality, and adding plenty of drama, thousands of fiber-optic filaments embedded between the stones twinkle at night, mimicking city lights in the distance. A similar water wall is also part of the garden’s entry. Says Jungles, “It makes the space magical to have the sound of water come from more than one location, just like the effect of stereo music.” Next to the pool, powder-coated aluminum boxlike planters in varying shapes add sculptural dimension, while the plantings soften their strong geometric lines. 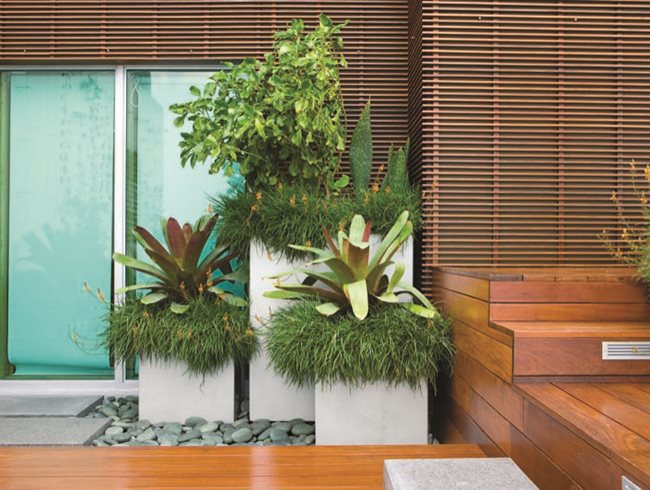 A trio of plantings in powder-coated aluminum containers create a sculptural effect near the garden’s entrance. Photo by: Jon Whittle.

On an 18-foot wall next to the main entrance to the garden, Madagascar jasmine (Stephanotis floribunda) rambles along a stainless-steel cable grid. Its waxy white flowers exude an intense fragrance similar to true jasmine (Jasminum officinale), although they are unrelated. It’s one example of how Jungles deftly melds architectural and natural elements, often considered his signature as a landscape architect. In the center of this wall, a vertical garden designed by Jennifer Davit using a 6-foot-square, stainless-steel-mesh screen features three different species of Tillandsia (T. concolor, T. bulbosa and T. ionantha). Also known as air plants, tillandsias absorb water through the tiny hairlike trichomes covering their leaves rather than relying on their roots, as most plants do. Davit’s goal was to create a “living vertical plant installation that requires little irrigation, fertilization and maintenance.” The suspended plants require only a bit of watering during Florida’s dry season. The screen can also be moved easily when severe windstorms are forecast.

To create the visual—and psychological—buffer around the rooftop’s edge that Fontanals-Cisneros pictured, Jungles designed low aluminum planters. They afford enjoyment of the spectacular vistas while being surrounded by plantings. At the outside corner of the ell, an entertaining area with sleek white-cushioned, wood-framed furniture overlooks both the bay and the cityscape. One planter behind this seating area features Kalanchoe thyrsiflora and Bulbine frutescens with its mass of tiny leaves and orange blooms. The latter appears throughout the garden as a unifying feature.

Nearby, an aluminum pergola creates shade above the dining and kitchen areas. A retractable fabric awning adds even more protection from intense solar rays or rain. The small outdoor kitchen, which includes a dumbwaiter, is enclosed by walls made from horizontal slats of ipê. They disguise the utilitarian elements while retaining a see-through sense of airiness. On this side of the rooftop, the floor consists of long strips of alternating grayish-brown-colored limestone and light-gray granite accented by gaps filled with small, smooth pebbles. It’s another touch of textural contrast that enlivens the space and makes it seem more like an earthbound garden.

Ella Fontanals-Cisneros likes to entertain in her rooftop garden, where she enjoys hosting small gatherings. She especially likes the way its design offers a sense of discovery. “When you enter the space, there’s just a hint of what lies ahead. Then you pass by the pool, and you see the whole vista.”