Tom Kuntz and Jenny Rask hired the Los Angeles-based design firm Commune to transform their home and steep gardens into a series of discreet oases. By David A. Keeps

On a sunny afternoon in April, Tom Kuntz hauls a 12-foot-long weathered wood dining table out of his hallway, through a pair of French doors and onto his sprawling deck in Silver Lake, a bohemian enclave in the hills of Los Angeles. He lines it up with an outdoor banquette, which doubles as a toy chest for his three children, appraises it, then goes back inside for a bench and some chairs. He pulls them up to the other sides of the table—now there's room for a dozen for dinner. 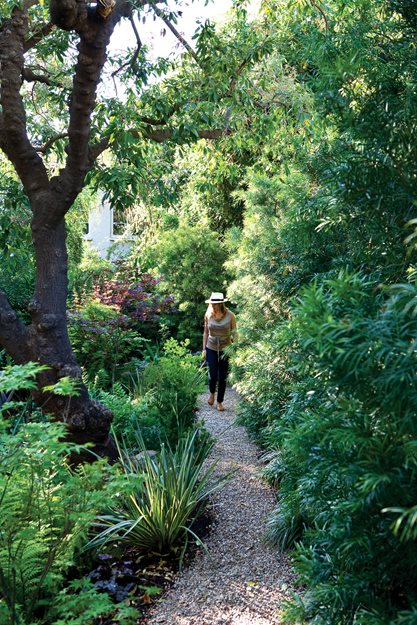 A guest strolls down the gravel path, lined with fern pines, at the top of the sloping garden. Photo by: Gemma & Andrew Ingalls.

This down-to-earth approach defines the transformation of the house's once forlorn backyard by the seven-year-old Los Angeles-based design firm Commune, a creator of midcentury interiors and outdoor spaces for high-profile clients like the Ace Hotel in Palm Springs and Heath Ceramics' flagship store in Los Angeles. When Kuntz and his partner, Jenny Rask, bought the property, they knew it needed work. “The gardens were nonexistent,” recalls Kuntz, a filmmaker who favors T-shirts and jeans. “It was a total no-man's land, an extreme slope, overgrown in a way that was not charming.”

In Los Angeles, a city defined by architectural diversity, with Spanish Colonial, French Normandy, and jet-age structures sitting side-by-side, the couple's home is an intriguing hybrid. The unassuming stucco box was built in the International Style in 1931. It feels rustic yet contemporary—an Asian-accented, Bauhaus-influenced structure that, with its central courtyard and glass walls framing backyard views, embraces the California ideal of indoor-outdoor living. Kuntz and Rask, a graphic designer, wanted a home that took advantage of the warm climate, with decks and gardens that would be suitable for adults and children. It needed to be informal, lush but unfussy, and practical. “I needed a place to grow herbs and vegetables and a spot for the composter,” says Rask. 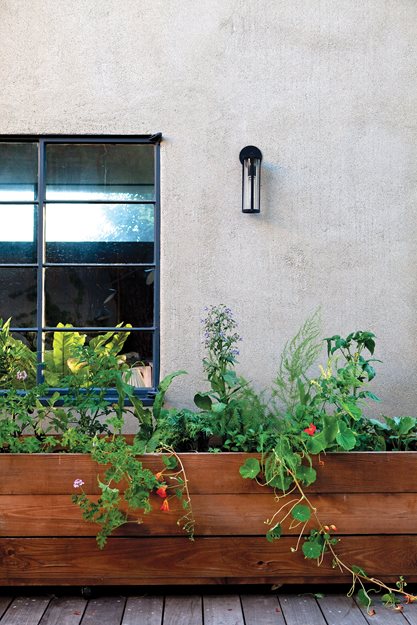 In a redwood planter, Rask grows borage, nasturtium, and other edibles. Photo by: Gemma & Andrew Ingalls.

It wouldn't be easy. Perched on a steep knoll, the property was shrouded by mature trees that provide cool, shadowy cover atypical of an L.A. garden, allowing for shade plants that require little water. Using appropriate botanicals for the conditions, Brown's goal was to create harmonious sight lines, colors, and textures that linked each planting area and complemented the architecture. “We looked at a lot of Japanese gardens because I wanted to be faithful to the house,” he explains.

To marry the interior and the exterior, Shamshiri designed two sets of L-shaped steps, which descend from the house into the garden in the central courtyard, and double as amphitheater-style seating. Outside the dining room, Commune refreshed a Japanese flourish original to the home, adding concrete stepping-stones to bridge a narrow lily and lotus pond. The design firm streamlined the interior using elemental materials: cement tile floors, built-in woodwork, and walls finished in a natural earth plaster called American Clay. The exterior was re-skinned in natural brown stucco, and the same material was used to finish a 13-foot-tall freestanding outdoor fireplace that punctuates the house like an exclamation point. 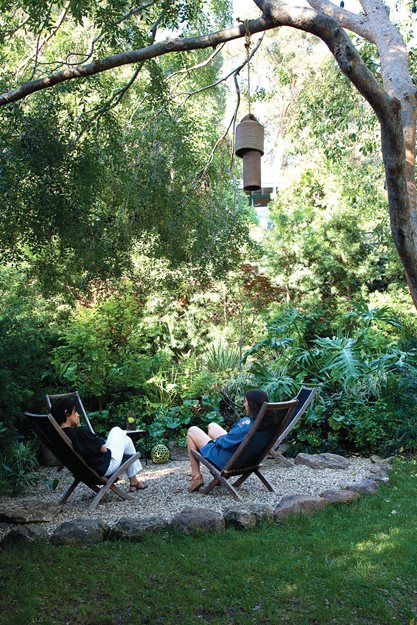 Wood-and-string chairs on a circle of gravel populate the lower level of the garden. Photo by: Gemma & Andrew Ingalls.

As a designer who focuses primarily on color and texture, Brown is particularly attentive to the sculptural qualities of trees. His first fixes were among the simplest. In the front lot, he uprooted mondo grass and pittosporum, which had a bungalow look, and replanted them in the backyard. He replaced them with ‘Nana’ (creeping juniper) and he pruned the dwarf pines that were on site bonsai-style for a more Asian feel. Set among warm Colorado Moss cobblestones and shredded cedar bark, the evergreen fingers of the ‘Nana’ are slightly spare now, but “when it's grown in, it will be an undulating skirt that flows from the house,” notes Brown.

Past the front door, a set of doors off the main hall reveals a courtyard. At its focal point is a decades-old Chinese elm. The tree produces a canopy that filters sunlight, creating a cool area that allows shade ferns and philodendrons to coexist with jasmines, Japanese maples, succulents, and plumeria. “The trees are deciduous so it feels seasonal, which is a rare thing in California,” says Shamshiri.

The home's central hallway leads from the courtyard to the backyard, which can also be accessed from a multipurpose deck. The 575-square-foot, L-shaped space—with a redwood kitchen-garden container exploding with edibles from Jimmy Williams of Hayground Organic Gardening in Los Angeles—serves as an open-air living and dining room. A pair of metal-and-rope midcentury rocking chairs by Blackman Cruz Workshop, as well as a table and ceramic piece by Stan Bitters, flank the monolithic fireplace.

This phase of the redesign was simple compared to what needed to be done on the other side of the deck. The land fell off precipitously into a hillside tangled with debris. Developing that landscape, Brown faced his greatest challenge. After spending a week visiting the space to observe the sunlight at all hours of the day, he cleared the hillside and trucked in 40 cubic yards of soil to raise the bottom of the slope nearly 4 feet. The new grade allowed for a flat area, a rarity for hillside homes in Los Angeles, with a shade-tolerant Marathon 1 fescue lawn where the kids can play soccer. Podocarpus gracilior (fern pines) border the area, providing a screen for privacy. “Their Asiatic form really fit with the style of the house,” Brown says.

Tom and Jenny wanted the space for the children, but Brown was able to add an area where grown-ups could gather: a circle of gravel with four wood-and-string chairs. To link the two elevations, he sculpted flowing steps from the same stones he used in the front—Colorado Moss cobblestones and Del Rio pebbles—with enchanting results.

After installing the garden last fall, Brown cautioned the owners to be patient, as ivy and creeping fig covered the walls, and coleus and acanthus will die back in winter to reveal philodendrons, pittosporum, Tasmanian tree ferns, and begonias not yet grown to full glory. “It's not like a painting that's finished the first time you see it,” he told them. “It's like soup: The longer it cooks, the better it is.”

Tucked on the slope among the flax, clivia, and begonias are charming focal points. An installation of broken pieces from a stone fountain that once sat in the front yard gives the appearance of ruins, making the garden look generations old. A rope and wood swing that hangs from a sapote tree entertains the kids and catches the eye, a coda to the play space. A hammock hangs between two Chinese elms.

Kuntz takes the landscape in with a smile. “Last summer, this area was unusable,” he says. “When we finished, it was like our house doubled in size.” Brown nods, “The spaces are being used—that's all a designer really wants.”

Made in the ShadeShrouded in Chinese elms, majestic Canary pines, and a sapote tree, the Kuntz and Rask property is lightly sun-dappled throughout the day, creating an ideal space for shade-loving plants—unique for sunny Los Angles. Landscape designer Matthew Brown selected vegetation that was appropriate for the conditions and would provide “sculptural and textural integrity throughout the year.” Below are four shade-friendly plants he chose for their textural and color variety. 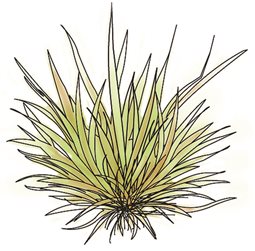 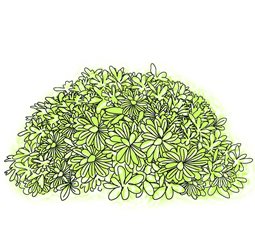 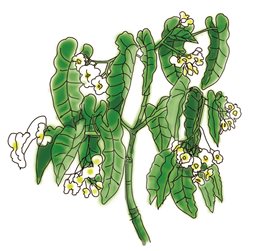 (3) Cane begonias, with their glossy leaves and delicate flowers, add a subtropical feeling. 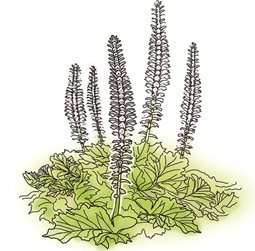 (4) Acanthus mollis has large deep-green leaves and can grow to three feet in height, with a striking flower spike that blooms mid- to late summer.

Brown's tips for maintaining such a garden: Make sure the beds are cultivated ahead of time and have good, well-drained soil; add compost if needed. Select appropriate plants, and once they are in, mulch well and seasonally.

David A. Keeps is a magazine and newspaper writer, as well as a television host, living in Los Angeles.