Wes Craven's garden, with it's lush plants and soothing stream, is anything but a horror show 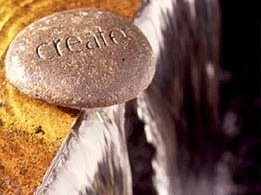 There I was, in the middle of a nightmare of a Southern California heat wave, driving up into the Hollywood Hills, heading toward the garden of director Wes Craven, creator of the ghoulish Freddy Krueger character and the terrifying Scream spoofs, among other horrors. What would I find? A sweep of the moody blackish Geranium phaeum, a.k.a. mourning widow? A lone specimen cactus in the shape of Freddy's knife-fingered glove? Or might the prince of darkness preside over a high-concept design in which every plant is allowed to wither and die — the horticultural manifestation of a twisted, deranged interior landscape? 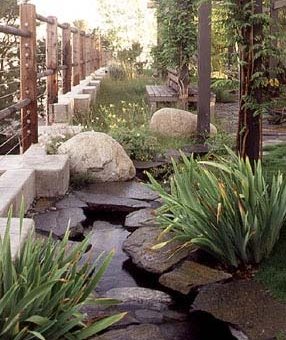 Imagine, instead, a Zen oasis of lush green foliage and running water, a place so soothing that the temperature suddenly seems to drop 10 degrees. Picture the elegant branches of an Australian willow (Geijera parviflora), its pendulous leaves swaying in the breeze, casting soft, shimmering shadows as a hummingbird dive-bombs a red-flowered Salvia greggii and flits away, happy as can be. And the garden's owner? Wes Craven's smile is surprisingly warm (especially for someone I half expected to jump out from behind a tree and yell ''Boo!''). He's an avid bird-watcher who's nostalgic for the sounds of rain and rivers — sounds he heard growing up in Cleveland, Ohio, near Lake Erie. 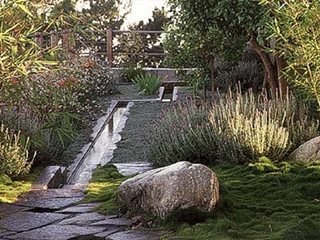 In fact, when Craven first met with garden designer Kathy Glascock, in 1996, the one thing he insisted on was a water feature, both for its gurgling music and its ability to attract birds. Then, when she got back to him with a sketch, he asked for an even larger one — a tall order for a long, skinny site that measures a scant 16 by 128 feet. But Glascock complied, with a stream that is now the very heart of the garden. Together, designer and director went to a stone yard and selected huge boulders, which were later craned in and carefully placed along the stream's path. As for the plants, ''Kathy left bouquets around the house,'' Craven recalls, ''so that we could familiarize ourselves with all of the colors and textures she was planning to use.'' 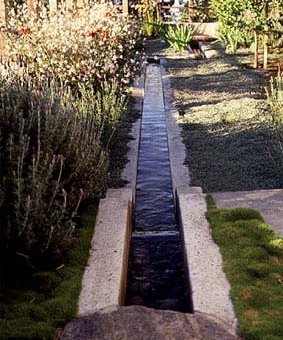 Glascock further defined the small space with a long pergola draped in Wisteria sinensis; the structure, with built-in benches, effectively divides Craven's yard into two discrete areas without harshly segmenting it into completely separate ''rooms.'' Both it and the fence surrounding the garden are made from redwood and taut stainless-steel cables. ''The steel works so well with the modern identity of Wes's house,'' Glascock says, referring to the mid-century architecture that led her design in a minimalist, somewhat Japanese direction. ''And on the fence, funnily enough, the cables echo the power lines in the distance.'' Mass plantings of lavender and of Gaura lindheimeri — its many white flowers resembling a haze of small butterflies — work in concert with a breathtaking view of L.A. to create a ribbon of continuity. 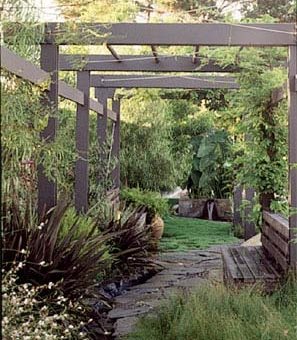 But it's the water that really makes this garden flow. The little river, which begins at a rectangular Indian slate fountain, weaves two seemingly disparate spaces together as it goes. First, it bubbles underfoot, running in and out of a flagstone path that takes visitors beneath the pergola and through a glade planted with those elegant Australian willows. Then, a stand of weaver's bamboo (Bambusa textilis) marks a transition: the garden becomes Mediterranean in character. The trees are citrus, heavy with Meyer lemons and grapefruits, and the meandering stream is now a sharply defined rill, which guides the water through the ground covers Dymondia margaretae and Cerastium tomentosum (aptly named snow-in-summer) to its final destination, a cistern hiding under an industrial-strength grate. 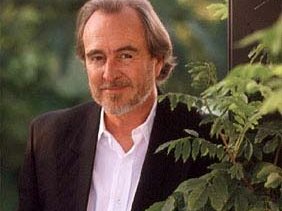 All the plant material had to be carefully selected for intense exposure on this sunny, windy hilltop, perched high above the city. Glascock used tough Mediterraneans, Australians, and California natives (including one of my favorites, the very gardenworthy Arctostaphylos densiflora 'Howard McMinn') in bold swaths, layered against one another. Rosa 'Dainty Bess' — not nearly as delicate as its name implies — makes an appearance in a stand of Verbena bonariensis. The Australian willows were brought in en masse; their loose structure casts a bright shade, dappled enough to allow sun-loving plants to flourish beneath them. The result is totally unique — a dry planting of phormiums, salvias, and lavenders that manages to impart the lush, cool feel of a shade garden.

Only the twisted and gnarled branches of a large, multitrunked strawberry tree (Arbutus unedo) seem to suit the garden of terror I had imagined, but here the contortion is sculptural — picturesque, not grotesque. Craven's is a graceful landscape that encourages walking, talking, and contemplation. The water draws guests outdoors and keeps them exploring. ''Even teenagers,'' the director says, ''who turn up their noses at anything adult, get excited tracing it to its source.'' Is it any wonder that shortly after the garden was completed, Craven stunned Hollywood by directing not more Nightmares or another Scream but the uplifting Meryl Streep vehicle Music of the Heart? (In fact, Streep's husband, Don Gummer, created a sculpture that now lives in the garden.)

Craven pays Glascock the highest compliment — that of enjoying his yard every day, watching birds splashing in the water and lizards sunning themselves on the rocks. ''It is incredibly peaceful here,'' he says, ''wonderful to wake up to — a very real source of pleasure.'' It's his sanctuary.

And Freddy Krueger? His glove is tucked safely away inside a glass display case in Craven's media room. This garden is the domain of Howard McMinn (the arctostaphylos), Tom Thumb (the phormium), and that dainty little rose named Bess.