Four years ago, musician Nate Mendel bought a house in the Los Angeles hills surrounded by a scrappy lawn and a few big trees. Mendel felt certain it could be transformed into a welcoming home base. By Susan Heeger

Four years ago, musician Nate Mendel bought a house in the Los Angeles hills surrounded by a scrappy lawn and a few big trees. It sat wide open to the street, and an energy-guzzling swimming pool swallowed much of its half-acre lot. But the 5,000-square-foot house itself was a gem, a low-slung ranch built in 1953 and untouched since. Mendel, bass player for the often-touring post-grunge band the Foo Fighters, felt certain it could be transformed into a welcoming home base. While its restorative mountain and valley views were already in place, the garden needed major help. 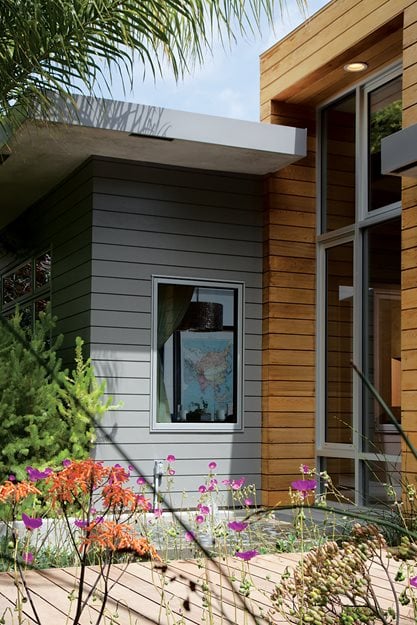 Mendel has a Northwesterner’s reverence for woodlands and a SoCal transplant’s appreciation of sunny, arid Los Angeles. As the son of a gardening dad, Mendel “energetically dug holes” as a child in eastern Washington, and he wanted his 8-year-old son, Noah, to have the same experience with lots of play space that was easy to maintain and didn’t overtax the environment. When he works at home — in the music studio/office/guest pavilion designed by architects Elissa Scrafano and Gus Duffy, who also renovated the house — Mendel needs to wander outside for inspiration. Before a single plant went in, Mendel and landscape architect Mark Tessier spent hours walking the long, narrow lot, discussing options. “Mark was good at tactfully shooting down my unworkable ideas,” Mendel remembers, smiling. “Then he’d tell me what would work and still capture the feeling I was after.”

Both saw the house’s siting as a guide. Facing the street to the southwest and the foothills of the San Gabriel Mountains to the northeast, it suggested two distinct outside spaces, one woodsy and sheltered, the other bright and panoramic, with a lawn surrounding the pool. Doors and windows on the home’s four sides dictated the scale and location of garden zones. The kitchen now overlooks a spacious covered lounge, a media room links to the swimming pool, and a play room opens onto a sitting porch that’s cool on blazing afternoons. The new gardens, created by Tessier and his associate Joshua Rosen, offer a sequence of scenes, including a sun-dappled forest walk, a Valencia orange grove that recalls the valley’s agrarian past, and a gathering spot topped with angel’s trumpet (brugmansia). A hedge of Japanese blueberry (Elaeocarpus decipiens) provides privacy on the street side, where a translucent gate opens onto a splashing fountain, and a bridge to the front door spans a sunken bed of succulents in lieu of a pond. “The succulents look exotic because of how they’re treated,” says Tessier. “And the sound of water enhances the illusion of a pond, which would have demanded more resources.” 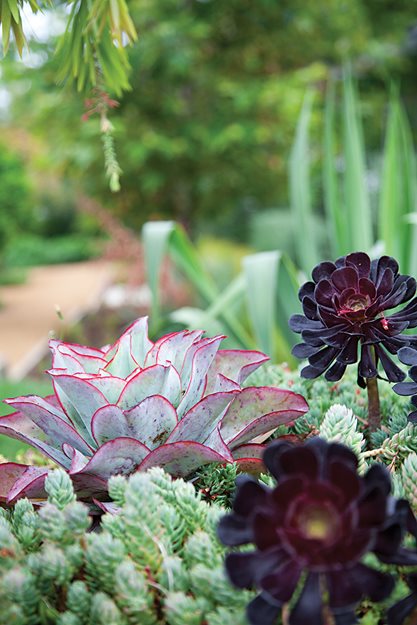 With input from Mendel, Tessier kept the plant list short, massing their choices into uncluttered, limited-variety swaths that repeat from garden to garden but also emphasize naturalness. “We searched high and low for sycamores with quirky forms, leaning or multitrunked, the orphans no one wanted, so they’d look as if they’d grown here from seed,” says Tessier. He placed the trees at random-feeling intervals, which, again, suggested nature’s hand. 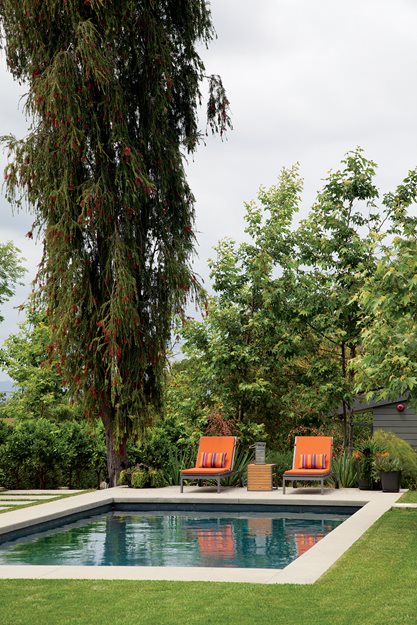 The brilliant red blooms of a bottlebrush (callistemon) inspired the furnishings’ colors. Photo by: Ann Summa.

A series of paths draws a circuit around the house, their materials varying from earthy decomposed granite to concrete, sometimes seamed with grass. One formal landscape element — the grid of juice-orange trees — serves as a transition between the house and the multipurpose pavilion, where Mendel and his girlfriend, Kate Jackson, a music publicist and artists’ manager, spend in-town work days. “At first,” Mendel says, “the idea seemed pretentious, but then I thought, ‘Hmm, I could go running and pick the oranges on my way back for breakfast!’”

Now that the garden is done, says Jackson, they use every section of it when Mendel isn’t touring, whether that’s to host Noah’s friends for pool days or drink wine with their friends around the lounge’s fire pit. Mostly, though, says Jackson: “When we’re in the garden, Nate’s in relaxation/zone-out mode. I’ll ask him, ‘What’re you thinking about?’ He always answers, ‘Music.’”