At a classic Beverly Hills home, the interior design inspired a surrounding garden. A collaboration between French interior designer Chahan Minassian and landscape designer Judy Kameon, this modern house is designed for the indoor-outdoor life. By Susan Heeger

One day this past winter, after hard rains and heavy winds had battered Southern California, Michel Perrin flew home from a trip to Asia to find a massive palm tree in his swimming pool. Perrin, a French native who has lived in Beverly Hills since 2006, was more amazed than chagrined, though it wasn't even his palm. It had toppled from a city lot. “For such a big tree,” he marveled, “it has such short, shallow roots!” 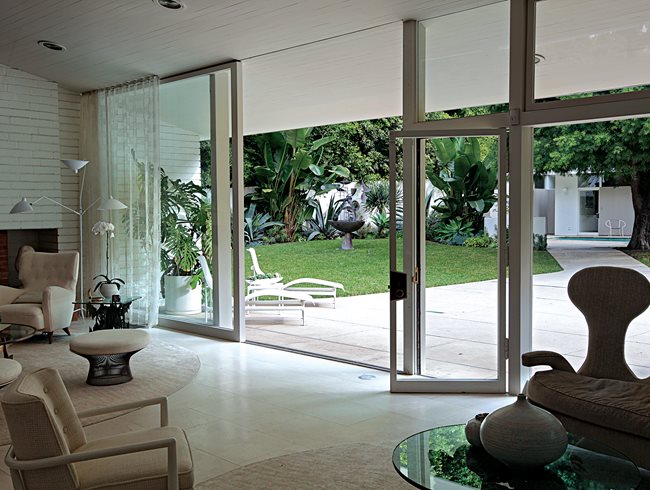 The house was designed by architect Victor Gruen, the interiors were decorated by Chahan Minassian, and the gardens were designed by the landscape designer Judy Kameon, resulting in a beautifully unified vision of indoors and outdoors.

A sliding glass wall opens the living room to the backyard, where an undulating border softens the grass area used for entertaining. Photo by: Steve Gunther

He shook his head. A plant border lay in ruins, a fence smashed. But that palm...

As recent California transplants, Perrin, his wife Sally, and their teenagers, Chloé and Emma, still shuttle between Los Angeles and Paris, where he is chairman of his family's leather goods firm. To them, the Golden State is a novelty, not a cliché, and they inhabit it in a personal way. When the weather cooperates, which is almost all year round, they live a classic, indoor-outdoor life in a 1950 home that was made for exactly this lifestyle. The house, “very Palm Springs,” in Sally's words, was designed by modern architect Victor Gruen with sunny courtyards for lounging and dining and glass-walled rooms that open onto gardens. But inside, with the help of French decorator Chahan Minassian, who traveled from Paris for the project, the couple ruled out the sort of sun-dazzled colors often found here in favor of ivories, soft sages, and blues. Outside, in a complementary spirit of almost European restraint, landscape designer Judy Kameon kept the plant palette just as simple. Yet the result, as one moves from the street through the large front garden, into the entry courtyard, then the house and out again, onto the lawn and the patios around the pool, is a detailed though subtle experience of a mix of light, air, texture, and tone that seems essential to this place but controlled in a way that California typically isn't. 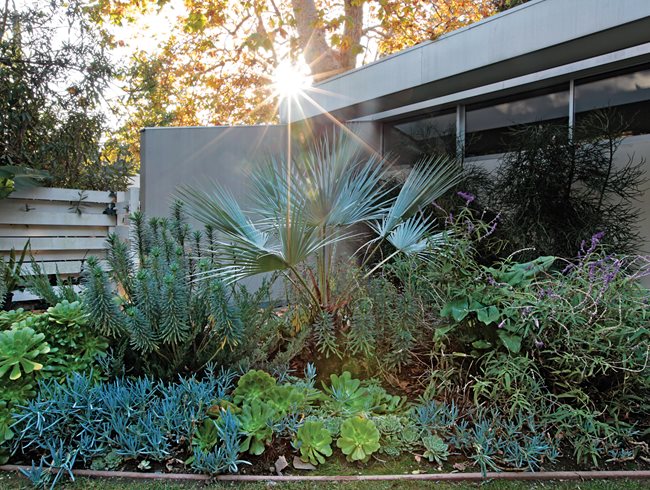 A silvery fan palm (Brahea armata) anchors a corner of the backyard. Photo by: Steve Gunther.

Cool but not cold, the Perrins' low-slung house and embracing gardens are all of a piece, the product of a collaboration between the owners and their two designers. It was Minassian, in fact, who brought in Kameon (whose architect father once worked for Victor Gruen) to the project after seeing the Parker Palm Springs hotel, where Kameon had designed a striking series of garden rooms using plants to soften the sleek building while adding exotic lushness to the desert setting. 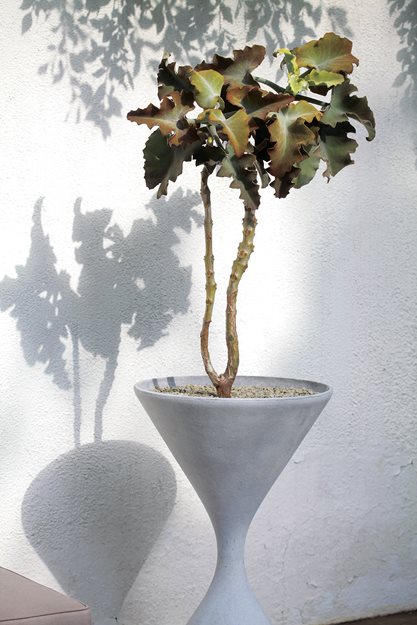 A Spindel hourglass container is planted with Kalanchoe beharensis.

This Greenform Spindel Container ($467) is available from Spruce Eco-Studio. Photo by: Steve Gunther.

The Perrins gave Kameon a wish list. Michel wanted at least a couple of palms and, given their bicontinental lifestyle, a low-maintenance garden scheme. Avid art collectors, both Michel and Sally requested “sculptural” succulents to harmonize with the house and serve, like the art inside, as focal points. They also asked Kameon to scrap the front lawn and boxwood hedge between their house and the busy street. “They wanted romance,” she remembers. “What existed was classic Beverly Hills, everything clipped and conventional. As the first thing you saw, the front set the tone for the entire garden and the house.” 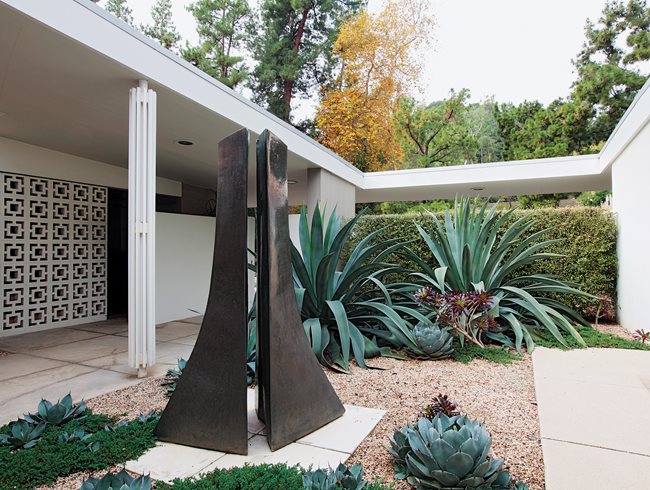 Minassian walked Kameon through his scheme, showing her fabrics and other materials, which include textured linens and silks, a Tibetan goatskin rug, a curtain of iridescent seashells, all in shades of cream, bronze, silver, and aqueous blue to evoke the ocean and the desert.

Inspired by the look and feel of these, she designed a “demi-screen” of large specimen agaves interspersed with tall grasses to block portions of the road and frame the building with organic curves. She carried inside features out: The ivory stripes of Agave americana var. medio-picta ‘Alba’ presage the living room's rich upholstery. Creamy pea gravel mulch echoes the indoor terrazzo floors, while the plumes of dwarf pampas grass (Cortaderia selloana ‘Pumila’) mimic the goatskin's pettable nap. Other plants (Agave weberi andSenecio mandraliscae) have a shell-like shimmer and a blue cast deepened by adjacent lime-green ferns. Besides heightening the blues, the bright greens also link the front bed visually to a hillside behind the house, suggesting the landscape's ties to the wilder world. 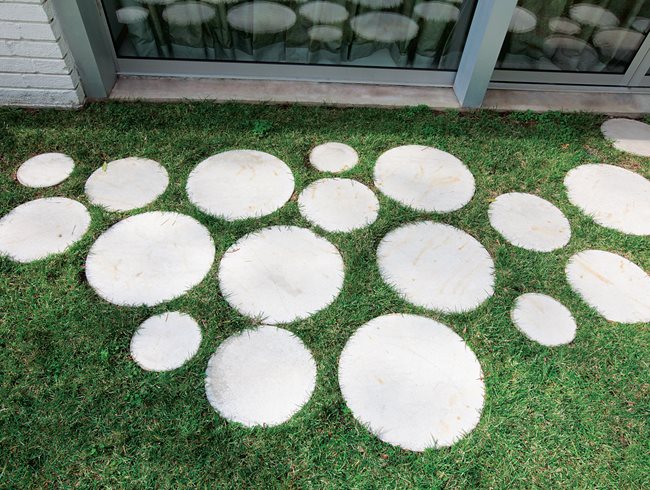 Prefabricated pavers from a local building supply company, arranged in a pattern reminiscent of champagne fizz, serve as steps from the master bedroom to the backyard. Photo by: Steve Gunther.

As expansive and public as this picture is, the entry courtyard is invitingly private, even as it repeats themes from the front. Here, where birch trees and a lawn once created a bland view for the surrounding glassed-in rooms, now more agaves swirl around a curvy sculpture by Michael Arntz. But instead of admiring these succulents from afar, someone standing inside the courtyard is close enough to appreciate their patterned leaves and the contrast of one variety's spine-tipped rosettes with another's broad, fleshy straps. “Tone-on-tone compositions call attention to details,” says Kameon, who loves to play with scale in restricted spots. “My impulse in a small space is to put in big things.” 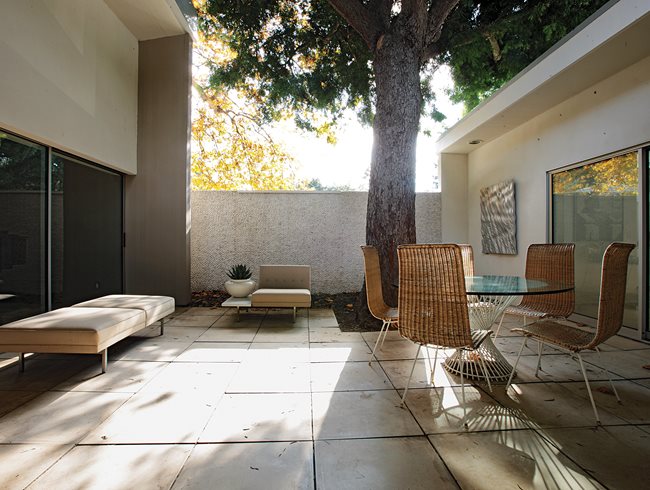 Inside the front door, the space quickly expands again, and it's possible to see past the airy living room—where a round rug and circular stools counter the rectilinear architecture—to the deep rear garden, the largest outdoor room of all. Thanks to an original sliding glass wall, the whole back of the house opens up to the garden. But initially, what was here wasn't worthy. “The view was missing the middle story, the layered planting between the ground and trees that makes a landscape hospitable to people,” Kameon says. To fix the problem, she fattened and reshaped the plant borders around a central lawn that the Perrins wanted to keep for entertaining, adding tropical birds of paradise, aeoniums and sages, along with silver fan palms for Michel. She left untouched the angled pool, complete with diving board and surrounding paving and, repeating the shape of furnishings inside, a bubble chair was hung from a podocarpus tree. When the Perrins asked for stepping stones outside their master suite, Kameon scattered round concrete pavers in a pattern reminiscent of champagne fizz. 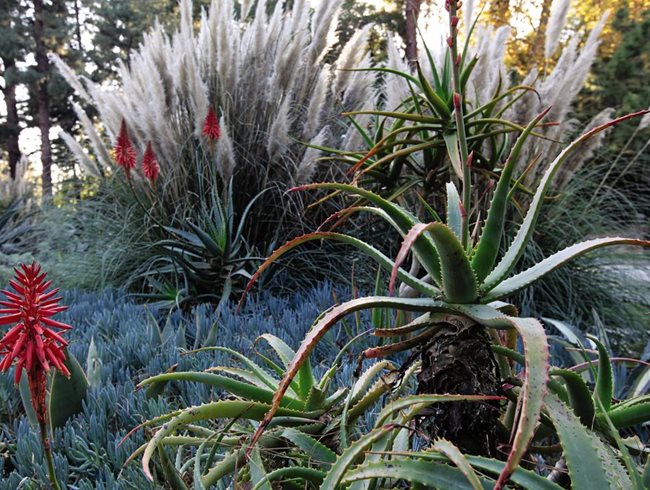 Dwarf Pampas Grass (Cortaderia selloana 'Pumila') was planted in front to echo colors in the house. Photo by: Steve Gunther.

“This is what we were looking for when we moved to Southern California from Paris,” Sally says. “A tranquil and harmonious setting, from the inside out.”

And what of the palm tree in the pool?

Days after it fell, Michel was still waiting for the city to winch it out, he says. But he wasn't impatient. The tree fascinated him. Half-submerged, like some stranded, exotic fish, it seemed to convey a message: California is more complicated and mutable than it seems.

And, as it turns out, so are palms.

Plant ListLandscape designer Judy Kameon developed an eye for color and composition through her earlier work as a fine-art painer. In the Perrin garden, she built her palette around colors from inside the house and chose organic shapes and textures to soften the building's rectilinear forms. 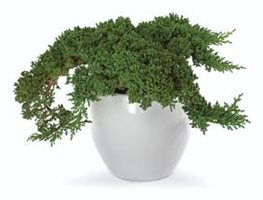 This ground cover-in slightly greener gray than that of the agaves nearby-sweeps through the entry courtyard, adding color to the gravel carpet and a rough texture among the smooth leafed succulents. 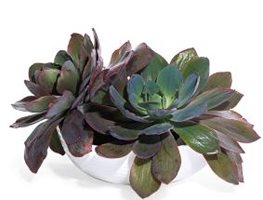 An elegant succulent with 12- to 16-inch-wide rosettes in dusty blue with pink tips. It grows on a short stem, reaching a maximum height of two feet, and provides an appealing change of texture when used with other groundcovers. 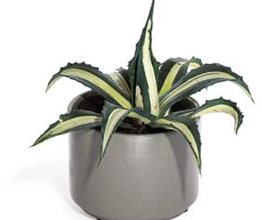 As one of the "sculptural" succulents requested by the Perrins, this striped variety captures the silver-greens and ivories of the home's interior in a sea-creature shape that Kameon repeats throughout the garden. 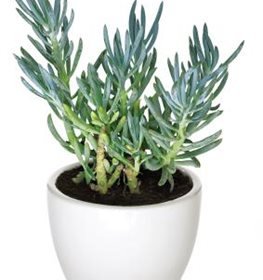 One of the garden's bluest plants, winds through the front garden border like a stream, knitting together the moody blue-grays of agaves and the greener blues of the pampas grass. 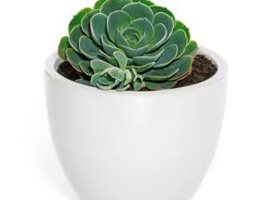 Commonly known as Mexican Snowball, this succulent forms clumps of small, tight, six-inch-tall rosettes. Wonderful in containers or as a fast growing groundcover. Its blue-gray leaves stay true to the strict color palette of the Perrin Garden. Like all succulents it prefers well-drained soil. 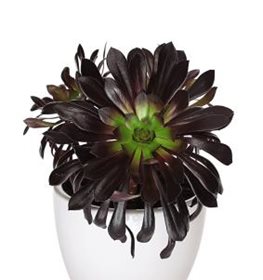 In a arden with few flwoers, Kameon relied on the rosette-shaped foliage to suggest florals yet contrast with other leafy greens. With its coppery-bronze cast, 'Zwartkop' also picks up the patina of the courtyard sculpture. 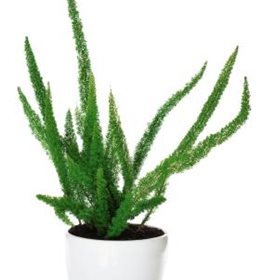 "A bright green among blues can intensify all the tones," says Kameon. In the front border, this plant not only adds a shot of vivid chartreuse, it also emerges from the swirl of senecio with the striking textured tentacles. 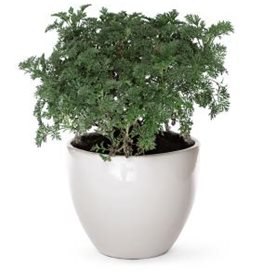 A silver-leafed perennial, eases the front garden's more rigid, static elements, such as the large agaves and aloes.

Susan Heeger is the coauthor of From Seed to Skillet. Her most recent story for Garden Design was "Top of Their Game" (April 2010).