In gardens around Japan, moss is used to create spaces of deep tranquility and transcendent beauty. By Susan Heeger

It seems fitting that my husband and I got lost on our way to Saiho-ji, arguably the most famous moss garden in the world but one carefully tucked away from it, on the outskirts of Kyoto. To reach the 1,300-year-old temple grounds swathed in at least 120 kinds of moss feels like tearing an opening into contemporary Japan. That modern context, a maze of tile-roofed houses winding up and down around the garden’s elusive entrance, trapped and confused us, until a sympathetic local resident parked her bike and showed us the way, as she’d clearly done for other tourists. Just in time, we reached the gate with 40 or so others, all of whom, like us, had written ahead for permission to roam through four-and-a-half acres of plants that the Japanese revere. 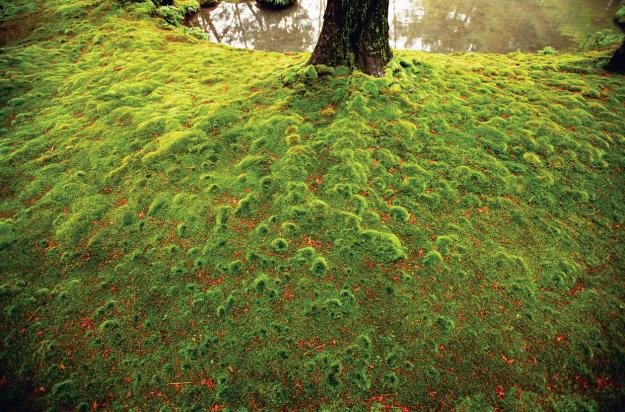 Moss lines the bank of the pond at Saiho-ji. Photo by: Robert Essel NYC/Corbis.

Mosses—the shy, shade-loving greens that favor undisturbed spots like tree trunks and riverbanks—thrive in misty climates and tend to show up where they like, not where gardeners put them. An entire landscape of mosses requires coddling. From visitors, it demands exquisite attention to detail—or at least a calm and open heart.

To instill that almost reverent receptivity, the monks at Saiho-ji have established a ritual that all visitors must participate in before touring the grounds. In a temple hall filled with small, low wooden desks, we were asked to sit on the floor with pen and ink and trace the printed characters of a sutra, or Buddhist scripture—a job that took well over an hour. While we worked like docile children, the monks chanted, enfolding us in worshipful, transporting music. By the end of the session, everything seemed sharper, clearer—colors and sounds, every green silhouette. 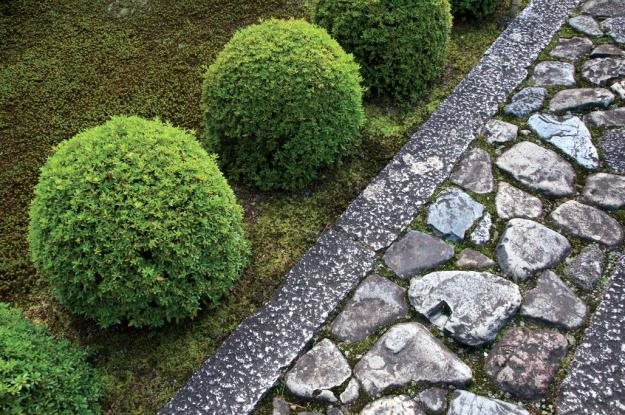 A mossy path winds through the garden at Renge-ji Temple. Photo by: Allan Mandell.

Having been so primed, we found it impossible to rush through Saiho-ji, to overlook, with our sharpened eyes, the innumerable variations on the theme of moss as we walked the path around a pond amid centuries-old cryptomeria trees. The forms of rocks and trees rose muscular and assertive through the mosses’ gentleness, suggesting natural forces that grapple and shift, achieving temporary harmonies through eternities of time. Being there, we experienced time as an infinite present. We stood in a living shrine, breathing the mystery. 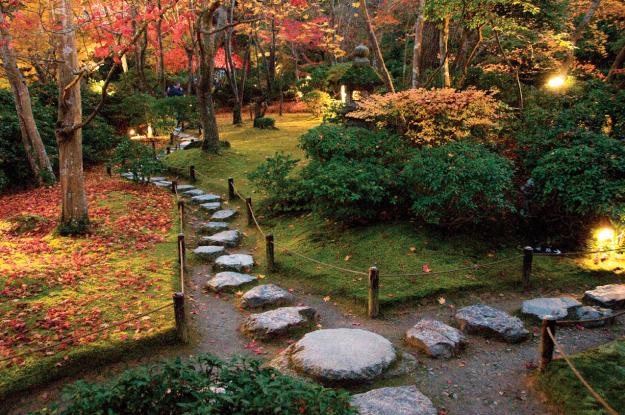 Moss is an element in many Kyoto gardens, including those at the Okochi Sanso villa. Photo by: Allan Mandell.

One of the reasons we went to Kyoto was to revel in moss—usually more of a bit player in landscapes—as a central feature, the main event. In Japan, moss is regarded as an essential element: a symbol of harmony, age, and tradition. For at least 1,000 years, Zen monks have celebrated its presence in written descriptions of temple landscapes. During our visit, we saw how modern homeowners weave it into private courtyards and front gardens, among paving stones, along curbsides and fences, and as a linking wash between bonsai trees. Even in these tiny spaces, moss joins the disparate pieces, knits rock to earth, pulls individual plants into unified compositions.

A friend of ours, Ken Kawai, who teaches landscape architecture at Kyoto University of Art and Design, took us through several gardens in the city and explained the appeal of moss. “Covering the surface of the earth, mosses strongly express the landform,” he said. “But at the same time, they are so fragile that you cannot step on them. This coexistence of visual strength and physical fragility is what makes mosses so compelling to the human mind.” 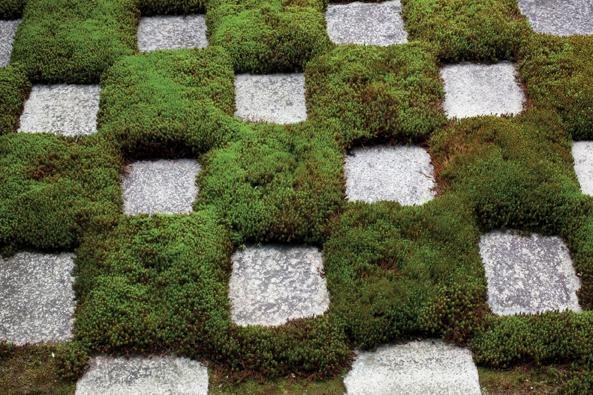 While nowhere as widespread as it is at Saiho-ji, moss grows in virtually all Kyoto’s best-known landscapes, from small-scale tea gardens to the sprawling grounds of imperial palaces. At Ryoan-ji, the most famous dry Zen garden, moss is the grounding element, an island of green around many of the 15 iconic rocks edged in raked white gravel. At Koto-in, a sub-temple of the larger Daitoku-ji complex in Kyoto, moss blankets a field beneath a forest of maples, creating an utterly simple, tranquil scene. At the Shugaku-in Imperial Villa garden, moss clothes a pond’s sloped banks, slowing and filtering the downhill flow of water, which becomes a mirror for surrounding trees. 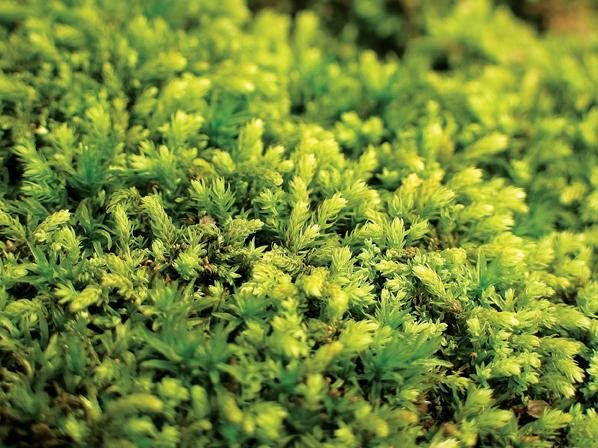 Even in these long-established gardens, it’s hard to tell the planted mosses from the squatters. “Mosses invited themselves into the gardens of Japan and thereby invented moss gardening,” George Schenk wrote in Moss Gardening (Timber Press; 1997), his authoritative book. This idea became clear to us as we walked through Saiho-ji, thinking about its unique history. In the 700s, a priest named Gyoki built a temple in these mountains west of Kyoto’s center, and some 600 years later, the Zen priest and famous garden maker, Muso Soseki, conceived a landscape around the remnants of an earlier garden he had found on the site. His design—which preserved some elements of the previous “paradise garden,” a version of heaven on Earth—reshaped the original pond with its three iconic islands into the form of the Chinese character for heart, which resembles an incomplete trapezoid. The circumnavigating strolling path was his addition, as was the dry cascade of rocks. 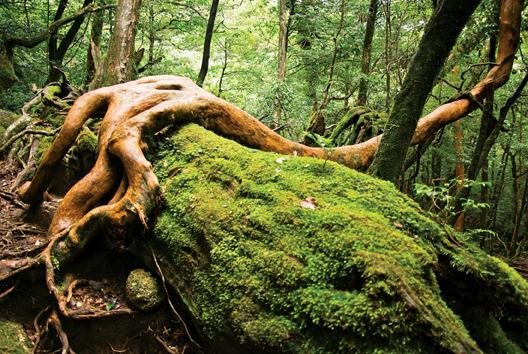 Yet the garden’s most celebrated aspect, the legion of mosses in different shades of green that swath hummocks and hills and mound around the pond, almost certainly arose on its own in the humid climate. Long after Soseki’s time, in the wake of wars, natural disasters, and neglect, the verdant carpet (primarily from the Leucobryum and Polytrichum genera) sprouted and spread on these shady slopes, suggesting a place much more natural than designed. Which raises the question: Exactly what defines a garden if most of what appeared on its original map has changed or disappeared? Is its expressive force rooted mostly in nature itself, or in the human imagination that persists and creates, despite the certainty of change?

Muso Soseki viewed the contemplation of landscape as a route to enlightenment. As an element of the considered landscape, moss invites self-forgetfulness. Its tiny details suggest realms normally beyond our perception. At Saiho-ji, I couldn’t help but get down on my knees before it so I could really understand what I was seeing. There’s so much more to it than what first appears: On the micro level, the soft moss carpet breaks into infinite, intricate parts—miniature tree shapes that resemble the mighty evergreens that shelter them. 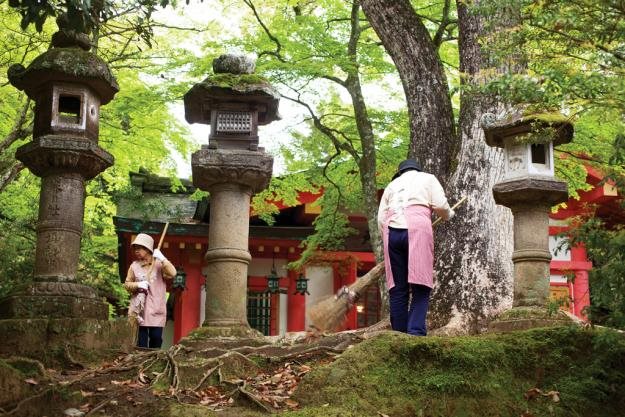 Just as it changes with point of view, moss also changes with the seasons, becoming, as Kawai told us, “vital and brightest in June, a preciously quiet time for the gardens in Kyoto after the nationwide festive periods of April and May, with their cherry blossoms and fresh leaves.” By fall, the greens of moss dim among Japanese maples that flame red and gold, the tree leaves a stark contrast to the mossy carpets.

Still, for us, having traveled to Japan during cherry blossom season, a sense of specific time seemed absent at Saiho-ji. As we wandered the paths, it didn’t feel like spring, or even morning or afternoon. It was time suspended, a light breath held, a break from thinking and evaluating. Change in this deep green realm is subtle, and the comfort of this place arises mostly from its air of benevolent endurance. Saiho-ji has been here for ages; it will be here many more, eclipsing loud, contemporary life with its muffling mosses. For the moment, primed by our ritual awakening, we were just ready to receive—and to be received by—this soft, unfolding world.

Learn about the different types of moss and the basics of growing moss in our Moss Guide as well as how to cultivate more moss with A Moss Milkshake.

RELATED: Add Some Zen to Your Landscape