John G. Fairey, a flora collector with a rare eye for design, transformed a Texas landscape into the famed garden Peckerwood. This is the story of a plant man and his garden. By Pam Penick

John G. Fairey’s eyes widen when he is asked to name a favorite plant, as if he’s been asked to choose his favorite child. “Why, all of them,” he replies softly in a sandpapery Southern lilt. And given his surroundings—some 3,000 species of rare and endangered plants at Peckerwood, his 40-year-old, renowned private garden near the Texas town of Hempstead—you’re rather inclined to believe him. 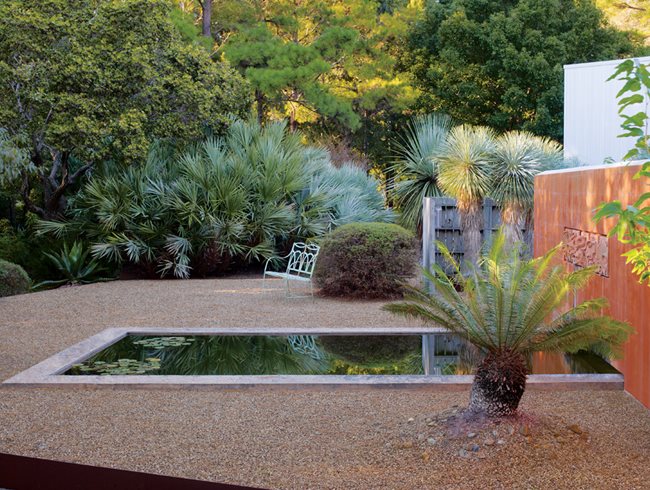 A reflection pool with ancient Dioon edule in the foreground (one of the most cold-hardy of all the cycads) and, in the background, Serenoa repens (saw palmetto palm), Nolina nelsonii (Nelson’s blue beargrass), and Yucca rostrata (beaked yucca). The bench is designed and smithed by Lars Stanley. Photo by: Marion Brenner.SEE MORE PHOTOS OF THIS GARDEN

Named for the Georgia plantation in Auntie Mame, Peckerwood has earned plaudits for its astonishing collection of plants—largely from Mexico and Texas but also Asia—and for the horticultural skill with which Fairey grows them. It also deserves attention for the artistic design of its landscape—unusual for the garden of a collector, in which acquisition often supersedes design considerations.

Fairey’s vision for Peckerwood, which includes a light-dappled woodland, several shimmering dry gardens, and a parklike arboretum, developed not gradually but in a transformative awakening during a trip to Mexico. An artist and professor of design at Texas A&M, Fairey had bought 7 acres near Hempstead, an hour’s drive northwest of Houston, in 1971 as a country retreat. He planted azaleas, camellia, and other species familiar to him from his South Carolina childhood, but his interest in collecting plants wasn’t sparked until he met Texas plantsman Lynn Lowrey, who often trekked into Mexico to search out little-known species to bring back for propagation. 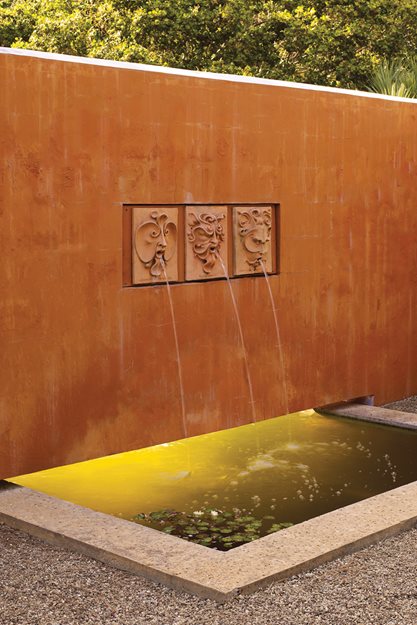 In the summer of 1988, Fairey joined Lowrey on one of his expeditions to the Sierra Madre Oriental mountain range in northeastern Mexico. They explored from desert to cloud forest, says Fairey, and searched for plants from dawn until after dark, by flashlight. The adrenaline high of the hunt hooked Fairey immediately, as did the evidence of the loss of fragile habitat caused by the overgrazing of goats and the sense that he could help save plants from extinction.

Over the years, Fairey returned to the Sierra Madre 100 times, fascinated by the variety and architectural beauty of the plants he found there. Back home he began using a newfound palette of sun-loving plants like yucca, agave, dasylirion, nolina, and dioon in his dry gardens and designing with shape and form, wind and sunlight, rejecting in one swoop both the English tradition of soft, flowering borders and the European model of formal framing and symmetry.

Today, plants reign supreme at Peckerwood, providing structure for garden rooms with their architectural forms and through massing of related species—“counterparts,” he calls them-from different parts of the world, like his screen of mahonia from both Asia and Mexico in the woodland garden. And as John Troy, a San Antonio landscape architect, points out, Fairey also plays up a feeling of surprise and dissonance by mingling plants not normally seen together on this side of the border, like palms and magnolias, pines and agaves.

One encounters these arresting combinations throughout Peckerwood but especially in the sunny, dry garden on the west side of Fairey’s residence, a two-story, corrugated steel-sided structure with a shady porch and attached art gallery. In the dry garden, fine, rounded gravel surrounds the plants and flows between them, forming paths and creating a natural-looking “floor,” knitting the garden together with a consistent color and texture. To the northwest of the house, in the woodland garden, pine straw supplants gravel, mulching plants and quieting visitors’ footsteps. Throughout, paving, walls, and other hardscaping are kept to a bare minimum, enhancing the naturalistic look. 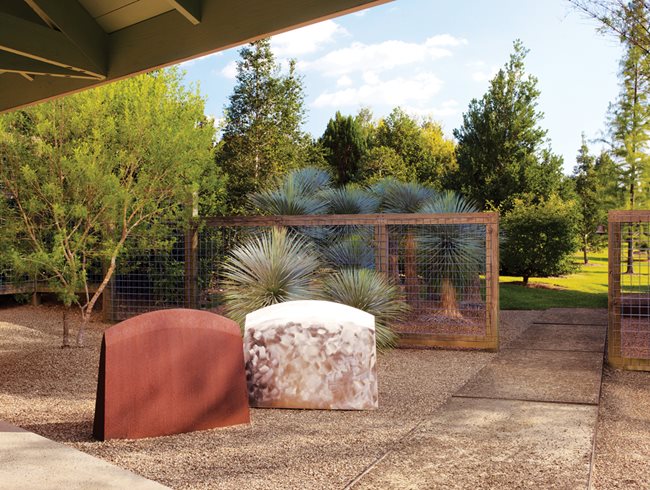 On the south side of John Fairey’s home is a fenced courtyard filled with Brazos River pea gravel and flagstones and a walkway constructed of quarter-inch steel plate frames paved with “iron ore,” a local gravel-and-clay mix. The two-part steel sculpture, Positive and Negative, is by Texas artist John Walker. The small tree to the left of the sculpture is Fraxinus greggii (little leaf ash). Behind the sculpture stands a small colony of Yucca rostrata. Photo by: Marion Brenner.SEE MORE PHOTOS OF THIS GARDEN

Fairey enjoys the act of planting and likes to experiment, digging things up and trying new combinations with such regularity that a friend once remarked he’d “never seen a plant at Peckerwood that wasn’t on the end of a shovel.” When siting plants, Fairey considers the play of light on leaves and the ever-present Texas wind, especially in the dry garden. During the blazing summer, that space is psychologically cooling thanks to an abundance of silver and blue-green leaves, like those of Yucca rostrata, a strappy Koosh ball of a plant that responds to every cooling breeze with a dazzling shimmer. Round forms and modernist geometry dominate here; spherical plant types like Echinocactus grusonii, Dasylirion longissimum, Nolina nelsonii, and Xanthorrhoea quadrangulata create a bouncy rhythm. Compensating for gully-washer summer thunderstorms and winter rains, Fairey elevates each plant for drainage on its own gravel hillock, “because I like mountains,” he laughs, a reference to his passion for exploring Mexico’s northeastern range. But Austin landscape architect James David sees the artist’s eye at work. “Individual plants are put on gravel pedestals for you to admire,” he says, “like buckets of hyacinths on display in a flower shop.”

“Every bit of the garden is thought through from a design standpoint,” says Bill Noble, director of preservation at the Cold Springs, New York-based Garden Conservancy. “If you know plants, then John’s collection will blow you away. If you don’t know the plants, you can still appreciate their beauty and the design of the garden.”

Because Peckerwood is such a unique repository and because Fairey is looking to the garden’s future, the Garden Conservancy is assisting him in transitioning it to a public entity. Asked what he would like for gardeners to take away from a visit to Peckerwood, which today encompasses 39 acres, Fairey says simply, “diversity.”

“John has expanded the palette of plants for gardeners in the South, Southeast, and Texas,” says Noble. “His garden has a lot to teach.” After a lifetime of teaching, Fairey remains himself an eager learner, continually experimenting with plants and treating his garden as an artist’s canvas on which he paints with light, foliage, and even the wind.

To plan a visit to Peckerwood Garden, go to peckerwoodgarden.org.