The Gardens of Jinny Blom

A human touch inhabits the sweeping gestures of the British landscape designer Jinny Blom: "Take risks. If someone tells you something is impossible, see if you can do it. Gardening is a knife edge between disaster and serendipity." By Caroline Donald

In a gardening-crazed nation that loves to talk, read, and gather about the national hobby, the British landscape architect Jinny Blom has no blog and no television show. She is famously tight-lipped about who her clients are, and stays in close touch with her designs: in her London office, Blom employs a staff of just five, counting the person who answers the phone. Nobody who knows Blom's work, however, would call it reticent. She's prolific, with two dozen projects going at once (including, currently, a private garden in the States), and wildly variable: she moves from neotraditional schemes, with walled gardens and giant topiary, to installations that are nervily contemporary. At last year's “Jardins, Jardin,” Paris's hip urban-garden exhibition, she combined the forbidding masses of giant stone seedpods with romantic grasses and dark purple salvias. Blom has the sweeping vision, and the management skills, to transform entire landscapes, delivering large-scale drama while getting the details precisely right. 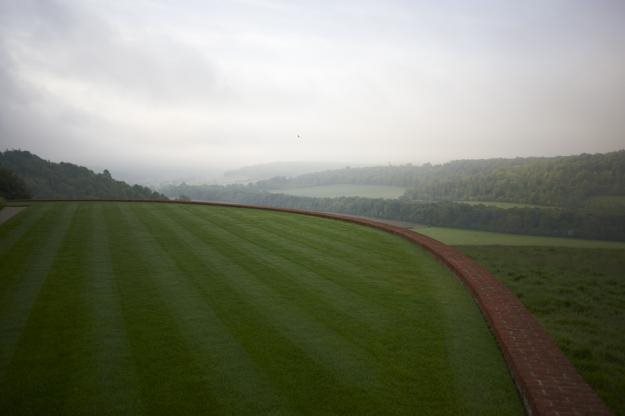 The gardening public might be surprised, then, to find that Blom is rather fun to be around. Witty, with a broad, easy smile, she is a sharply intelligent woman who quotes Balzac while remaining comfortably down-to-earth. Before starting work on a project, she diligently bones up on the site's history, and once the planting is under way, happily picks up a spade and digs in alongside her crew. Andrew Wilson, chief assessor at the Royal Horticultural Society's Chelsea Flower Show, calls her “a refreshingly different kettle of fish.”

It is this human sympathy, as much as her indomitable talent, that has made Blom one of a handful of women at the top of her profession. “I like people,” she says. “I want them to feel like their garden belongs to them. I get a great deal of pleasure from giving them that.”

No obstacle to that pleasure is too big. Corrour, a 57,000-acre estate in the Scottish Highlands, is a landscape of hills, moorland and loch so harsh and the possibility of sitting outside so occasional (when it stops raining in summer, the midges will eat you), there was little point in planting a traditional garden. And unless Corrour's owner, packaging heiress Lisbet Rausing, likes moss and rough grasses, anything Blom planted would have been eaten by marauding deer. Blom's first step was to erect 11 miles of deer-proof metal-mesh fence. Within that vast perimeter, she established what she calls an “antigarden”—an enhancement of the stark natural environment, rather than ornaments designed to distract from it. Thousands of trees and a woodland of natives—rowan, birch, alder, and Scots pine—now grow up to the modern lodge designed by Moshe Safdie. A mix of wildflowers, studded with panther lilies and giant Himalayan cowslip, not only reflect the estate's Victorian legacy but thrive in the Highlands dampness. 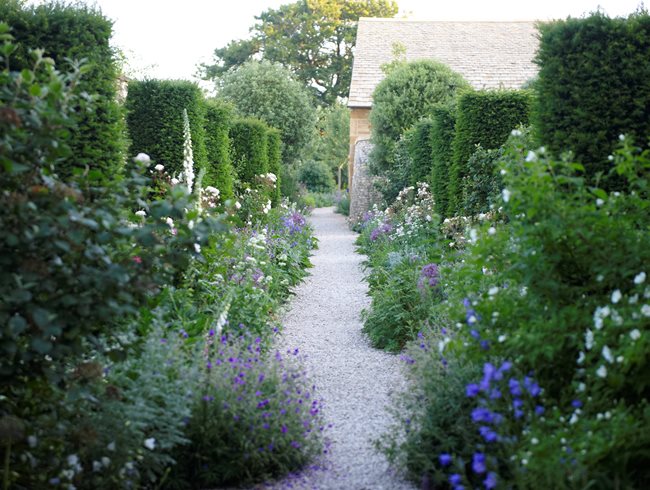 The granary walk in summer. Photo by: Charlie Hopkinson.

Blom's skill as a plantswoman shines, too, in urban situations, where she can let her hair down. “You can't plant exotics, such as phormiums, in the countryside. They just jar,” she says. “But in a town, where there are no points of reference, you can get away with all sorts.”

Blom's French mother was raised in Madagascar. Her late father was an inventor and agricultural engineer. On both sides she is descended from artists, scientists, and writers, which perhaps explains her ease in working in a multiplicity of modes. Her design philosophy, however, derives directly from her formal education. Blom studied drama and theater design, then trained as a psychotherapist before joining designer Dan Pearson's firm in 1996, when she was in her mid-30s.

Blom never shies away from showing a human imprint. She's an avid builder of permanent structures: flowering plants may come and go, but the bones of her gardens—walls, hedges, well-proportioned spaces and vistas—must look good, whatever the season. “I like to build something that looks as good falling down as when it went up,” she says. 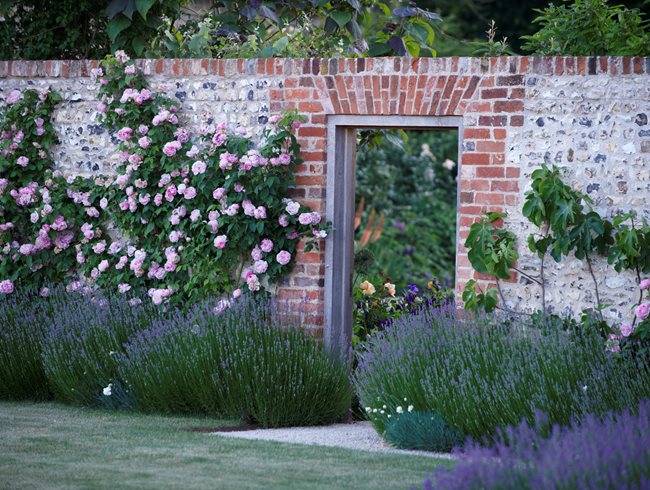 In this garden, just 40 minutes from London, Jinny Blom converted a neglected hilltop farm into a garden of exquisitely designed rooms with an astonishing grand finale, overlooking a wide valley in the high chalklands.

Lavender and garden roses decorate the wall of a garden room. Photo by: Charlie Hopkinson.

In 2007, she won a gold medal at the Chelsea Flower Show, the top prize at the world's top garden show. She is as proud of the dry-stone walls she commissioned at Temple Guiting, a privately owned 15th-century manor in Gloucestershire, that won her a Pinnacle Award in 2006. Her prizewinning walls divide the 14-acre site into 18 “rooms,” each with a distinct style and a story to tell. Blom, who grew up in Gloucestershire, likely took inspiration from Hidcote, a nearby estate that is one of England's most spectacular examples of this approach. (Vita Sackville-West's Sissinghurst is the other). She understands, at any rate, the power of a formal structure to outlast the tastes of the moment. “Human lives are so fleeting,” she says. “A garden should have a longer life.”

On a rural hilltop southwest of London, Blom recently made another series of garden rooms, this time for Lady Getty, widow of Sir Paul. (The Internet is less discreet than Blom about naming her clients.) Blom filled the raw space with a 45-meter cloud-pruned buxus hedge, an avenue of box-headed limes, and added yew topiary for an instant sense of history. Everything in the garden takes its place in the built environment. “There are minimal amounts [of flowering plants] that work very hard,” Blom points out, “such as chalk-tolerant, long-flowering roses and a huge Magnolia grandiflora against the barn.”

The pièce de résistance is a curved bastion, which juts out from the hillside to reveal the beautiful valley beyond. “It's a real showstopper. People gasp when the final door is opened,” she says proudly.

Most gardeners won't ever deal in the grand scale of Blom's projects, but Blom says her approach translates to any garden, however small. “Take risks. If someone tells you something is impossible, see if you can do it. Gardening is a knife edge between disaster and serendipity.”

Caroline Donald is a gardening editor at The Sunday Times in London.