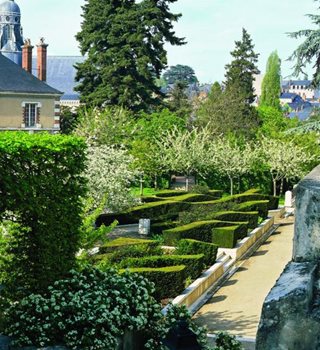 Gilles Clément is a hard man to pin down. Best known as the designer of original public parks in France and gardens from Chile to New Caledonia, he also writes popular fables, novels and philosophical reflections. He is an outspoken ecologist, botanist and entomologist who discovered the butterfly Bunoeopsis clementii in 1974 in Cameroon. Clément has always been a leader rather than a follower of fashion. In the early 1970s, having just graduated with degrees in both agronomy and landscape design, he was already defending “biological gardening,” an early version of today’s “work with, not against nature” theme. He champions a “humanist ecology” — not the Romantic veneration of nature unspoiled by man, but partnership. Now a professor at the prestigious Versailles National School of Landscape Architecture, he is its only lecturer to teach natural history as well as design concepts. Young admirers turn out in droves to hear him lecture all over France and would make him into a guru, were he not humorous and unassuming. Not unlike other masters of the profession, he himself prefers to be called, simply, a gardener.

Life-changing moment: As a teenager, helping his father spray roses with a highly toxic chemical, he got some in an open cut and spent two days in a coma. Soon after, Clément escaped his father’s highly regimented garden in the beautifully wooded Creuse area south of Paris to study nature in a nearby valley, and in 1977, he was able to buy the land in Creuse where he had sought refuge when he was young. He built a stone house there with his own hands and transformed the clearing into one of France’s most admired gardens, now called La Vallée. It is still a sanctuary for himself, family, friends and other fauna.

At La Vallée, Clément first experimented with the “Moving Garden” (le jardin en mouvement), influential as of 1985. Abandoned farmland, left to its own devices, gradually evolves toward forest growth. For Clément, the gardener’s intervention is not only admissible, it is central. He observes: “Watching wasteland, I am not only fascinated by the energy of nature’s reclamation, I also want to know how to insert myself in the midst of this powerful flow.” He chooses the moment when spontaneous growth involves all the elements usually found in a garden: trees, shrubs, vines, bulbs, grasses — even wild roses. The gardener’s role then is to guide and enrich in sympathy with natural process, integrating accidents like fallen trees. Clément uses no chemicals, no supplemental watering and no noisy, energy-wasting machinery. But he does prune: A self-sown willow is trimmed to show off its multiple trunks; wild hornbeams are clipped into smooth domes; a path uphill meanders through the heart of a sprawling smokebush (Cotinus obovatus). Most paths are simply mown grass, their routing changing from year to year to preserve self-sown clumps of foxglove, verbascum or hogweed, which draws many interesting insects. “A garden is always artificial,” he insists, “but home gardens can become wildlife preserves.”

Movement, as he sees it, involves  seasonal variation and change due to self-sowing and species migration. Moving gardens, lived in or visited, are never purely visual but very tactile — you kneel, lie down, rub against, smell, inhale. “My gardens are meant to be brushed against,” writes Clément. His first book devoted to the Moving Garden has been reprinted five times.

In the late ’80s and ’90s, Clément worked on mainly public projects such as a main section of the Parc André-Citroën in Paris (with landscape designer Alain Provost and architects Patrick Berger, Jean-Francois Jodry and Jean-Paul Viguier), the Valloires Abbey gardens (Les Jardins de Valloires) in Picardy, the Jardins de la Grande Arche de la Défense in Paris, the Henri Matisse Park in Lille, gardens of the Chateau de Blois and the Mediterranean Gardens (Le Jardin des Méditerranées) of the Domaine du Rayol. His most influential work internationally has perhaps been his part of the Parc André-Citroën. It includes a Moving Garden managed by the park staff: It is they who decide where the paths will be mown from year to year, to respect self-sown plants. Nearby, his color-themed gardens have a complex symbolism, which visitors might sense even if uninformed. Mothers report that when they enter the Green Garden, linked to the theme of silence, their children often stop talking.

In 1997, Piet Oudolf, Henk Gerritsen and Michael King commented on these gardens (in Nieuwe bloemen, nieuwe tuinen): “Gilles Clément’s triumph at Parc André-Citroën demonstrates the range of possibilities the art of gardening offers for both self-expression and communication. He has shown how ideas may be presented both on the grand scale and in the tiniest detail, making his approach as relevant to the private gardener as it should be to the broader world of the landscape architect.”

Clément refuses the romantic idea of an artist’s signature, but his public projects have common elements: He often links separate spaces — formally, as at Citroën or informally, like clearings in a forest — each with its own character. Connecting paths are meandering and multidirectional. Where he includes a single long axis (at Le Grande Arche de la Défense in the Domaine du Rayol), it never dominates in the sense of imposing a hierarchy and reveals little of the mysteries on either side, easily accessed from the long line but invisible until you happen right upon it. He sometimes uses geometric shapes, especially around historic monuments or where symbolism is suggested, but this formality is open-ended, almost subversive in its unpredictability. His rejection of hierarchy, in garden design as in life, is almost obsessive. For several years running, Clément refused the French national prize for landscape architecture, insisting it should be given to the anonymous farmers, engineers and foresters who are the real architects of the landscape. In 1999, the prize was bestowed on him without his consent.

Clément calls the Moving Garden a conceptual tool. His second one, the Planetary Garden, emerged after he had seen the first photographs of Earth from space. He imagined extending the confines — and care — lavished on home gardens to the whole globe. In 2000, Clément directed a major science exhibit in Paris to explain and provide positive examples of this theme. He also took a stance on species migrations similar to that of American writer Michael Pollan, which has not always made him popular in the scientific community. “The main objective,” writes Clément, “is to encourage biological diversity, a source of wonder and our guarantee for the future.”

For the past few years, Clément has been developing another concept, which he calls “landscapes of the Third Kind.” A study of highly managed farm and forest land south of Paris led him to seek out hidden spaces that escape monoculture and are forgotten by human industry, in-between spaces often abandoned after misuse, still capable of spontaneous revival. He has always had sympathy for marginal and neglected spaces — as La Vallée once was. His attempts at integrating such freedom into municipal design have proved controversial.

Clément continues to publish, consult and create worldwide. You never quite know where or when. Constant however is his faith in the garden: “Real terrain, mysterious but explorable, it invites the gardener to define its space, its wealth, its habitat. It holds humanity suspended in time. Each seed announces tomorrow. It is always a project. The garden produces goods, bears symbols, accompanies dreams. It is accessible to everyone. It promises nothing and gives everything.”