A woodland gardener uncovers lessons in the shade

Joseph Keller grew up in exurban Connecticut, in a modern wood-and-glass house nestled on a hillside amid Norway spruces and sycamores. When he was young, Keller and his brother played baseball on a lawn that sloped down to a pond ringed with ash, maple, and elm. Two decades later, the games are long over and the pond is gone — having first become overgrown and, finally, a marsh — but Keller is still around. He lives across town in his own house, but gardens his parents’ property. It is his horticultural laboratory and school, where he learns the lessons he applies to clients’ gardens with his landscape design firm. 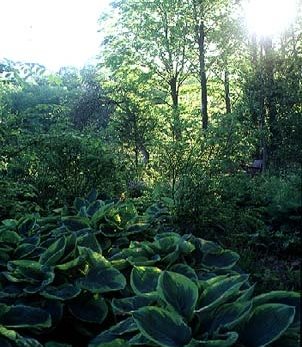 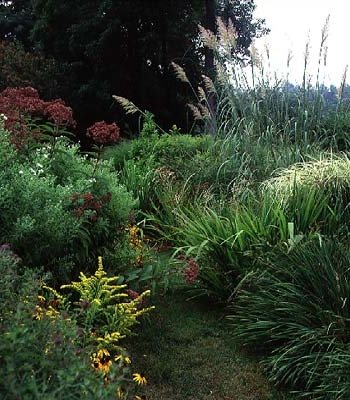 “I love this garden,” he says of his boyhood home. “My business financially underwrites what I do here. If I had my druthers, I’d never leave this place.”

It’s not hard to understand why. Keller has transformed the landscape into an inventive dialogue between plantsman and nature. Teaching himself his craft plant by plant, he has gone in nine years from one small bed of native perennials to a 4-acre garden that embraces woodland and wetland, vegetables and wildflowers. The result is not a series of static garden pictures, neither can it ever be viewed as a panoramic whole; instead, a visitor experiences this landscape as a constantly changing pattern of scenes and surprises. 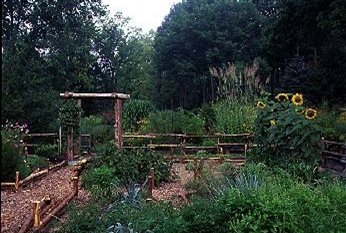 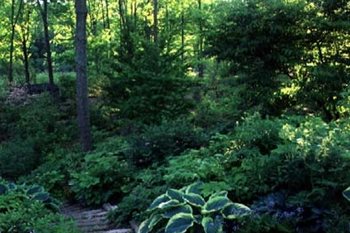 Other gardeners might have screened off the marsh, with its unruly growth and half-fallen trees, but Keller revels in it. “The shapes and colors of plantings at the bottom of the garden reflect what is happening in the marsh,” he says. “I try to get my plantings and the marsh to flow into each other.” Though a little purple loosestrife blooms in the shallow water, this invasive plant is edged (for the moment) by native wild rice, with its luxuriant, feathery heads. To run down the hill and meet this wilderness of towering yellow-brown grass, Keller deployed the equally tall joe pye weed, Eutrochium maculatum; Rudbeckia maxima; and Erianthus grass, underlaid with blue star, Amsonia. The glow from this summer symphony of color filters into Keller’s shady woodland garden, the glory of his landscape. There, he has cleared undergrowth and weak second-growth trees to make room for a choice collection of perennials, shrubs, and understory trees that could qualify as a small botanical garden, with each plant carefully placed to delight the wanderer.

“I call this whole place a garden of ideas,” Keller says, “because I want people who see it to come away with ideas for their own gardens — what will thrive in the shade, let’s say, or unusual plants they may never have thought of using.” Gardening in alkaline limestone soil, he has only a few acid-loving rhododendrons on the property. Instead, he relies on an array of woodland alternatives: 18 species of viburnum, eight of dogwood, and four of Halesia, a tree with white, bell-shaped flowers. Hundreds of different perennials and a dozen ground covers cloak the floor of the grove. Clethra perfumes the air all summer. 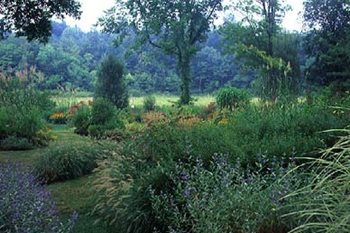 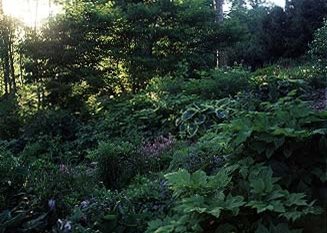 Many of the trees and shrubs arching out over wood-chip mulch paths are natives, but there are exotics, too. “I don’t discriminate,” declares Keller. Here, for example, is gorgeous Syringa reticulata, the Japanese tree lilac, with lustrous brown, cherrylike bark and white panicles of flowers. Over there is an unusual native pussy willow, Salix melanostachys, whose blue-black catkins spring from purple stems. Along another path is Magnolia ‘Elizabeth’, a hybrid that flowers a pale, pure yellow. Keller has even found a spot for the Japanese pagoda tree, Sophora japonica, an obstreperous street tree that lifts sidewalks and shoots up with alarming speed. “Here it just thrives in the understory, without taking over.”

Keller’s current favorite is American elder, Sambucus canadensis. “This underused native shrub can grow to 12 feet in a single season. The huge leaves are flawless, the creamy white flower clusters and purple-black fruit are beautiful, and no pest or disease bothers it.” Nature and horticulture dance together along every path. In the sunnier areas, where the lawn used to march down the hill, Keller has cut sinuous island beds. By high summer, the soil in these beds has disappeared beneath layers of foliage and flowers, many of which are head-high or taller. The paths become a labyrinth, winding amid giant vegetation that waves in the breeze. “I love big plants — like Pennisetum and Cimicifuga — jammed against the edge of a border. It creates a sense of mystery as you stroll through.” In winter, when perennials have died back to the ground, the same beds will be almost bare. “Many people like ‘winter interest’ in a garden,” Keller says, “but I prefer to see the soil explode each spring.” 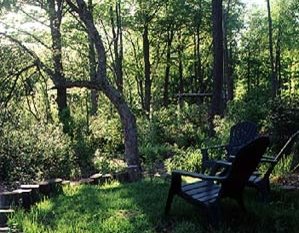 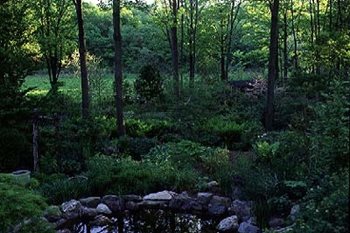 Though his is a garden of strong bones and bold effects, Keller also takes pleasure in small meetings. Two native lobelias, red Lobelia cardinalis and blue L. siphilitica, intertwine along a woodland path. A shrub border near the vegetable garden weaves the flowers, foliage, and bark textures of inkberry, Ilex glabra, with those of hibiscus, spirea, lilac, and native boxwood. A small new perennial bed filled with grasses mimics a prairie.

Serendipity often attends these encounters. In a little pond — made from a bathtub sunk into the ground, sealed with polyurethane, and rimmed with local stone — Keller planted water hyacinth, which flowers at exactly the same time as neighboring sedum, lespedeza, and verbena. “I had no idea that would happen,” he admits with a smile.      Around the raised beds of the vegetable patch, he has built a deer fence of red cedar logs that harmonize with the woods. A nearby gazebo is also made of rough cedar logs.

What’s next in this ongoing collaboration between plantsman and nature? “There are two islands in the marsh,” says Keller, “where yellow flag iris blooms.” He has begun to clear dead trees and to add sedges and Siberian iris. “You know, you could spend a lifetime here.”