Tales of a Big Sur Backyard

The hardest lesson to learn from gardening in the wild isn't how to clear, but when to leave well enough alone 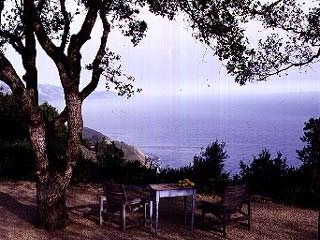 Start out gardening in a wild place where no garden has ever been, and risk simply comes with the territory. Do too much, and the wildness vanishes, leaving a landscape that is overdressed and out of place. Do too little, and the effort looks timid, a meager patch lost in the vast beyond. How can you harmonize what you want to do at a single moment with what nature has been doing forever?

This question has long preoccupied Sherna Stewart, a landscape designer, who with her husband, Kipp, a designer of buildings and furniture, has made a garden around their cottage in the wilds of Big Sur on the Northern California coast. Although she and Kipp have lived there 24 years, for Sherna the garden, more than ever before, is a place of experiment and discovery. 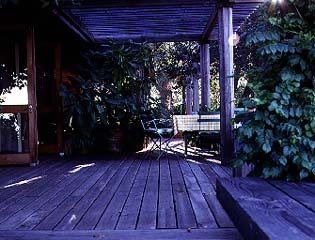 It wasn’t in the beginning. “I was afraid to cut anything,” she recalls, “as if every last plant was sacred. It’s a debilitating notion; you can’t be creative. I don’t feel that way now, but I don’t abuse nature. If you do the planned things first, you can keep on enriching the garden and building it. It’s like raising kids. You plan, but you also figure it out as you go along. The garden grows, but, unlike kids, it doesn’t go off to school or move away.”

When the Stewarts bought their house in 1973, the acre of hillside was buried in chaparral. Native oaks were neck-deep in wild rye, poison oak, and coffeeberry. The undistinguished foreground was a blur against the grandeur of mountains, canyons, coves, cliffs, ocean, and sky. Nature in excess provided the ultimate in borrowed scenery — not, however, as a passive backdrop, but as an unpredictable force. In planning a garden on her wild hillside, Sherna first had to consider fire, drought, erosion, and deer. 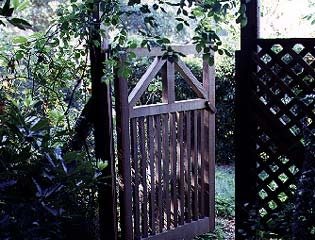 A perimeter cleared around the cottage for fire safety “only made the place look more lonesome and estranged,” she says. To impart a more settled feeling on the steep incline, Kipp constructed terraces with drystone retaining walls and crushed rock. “We needed something permeable to water,” Sherna explains. “Whatever we built had to drain as well as the natural slope.” She put in hedges of pittosporum to give the land “shelter and form and relief from grayness, exposure, and too much sun.” She and Kipp planted a kitchen garden and an orchard, which they fenced in for protection against deer. “Outside the fence we still have something wild,” she says. “Inside is more cloistered.”

Feeling unconstrained in the wild requires something more than time and patience. As in already established plots, gardeners bring everything to the garden — not just plants and design schemes, but all the tools we use to narrate our sense of the world around us: nostalgia, memories, fantasies, and other deep experiences that a landscape can reignite. Coming to Big Sur reminded Sherna of going to summer camp as a girl. For a child reared in city apartments, camp had been liberating, and “having a garden seemed an impossible luxury.” She learned about horticulture from books and by visiting city botanical gardens. In planning her own garden at Big Sur, conventional how-to books held no appeal. Instead she sought out historical works that talked about how people landscaped ground that had never been cultivated. 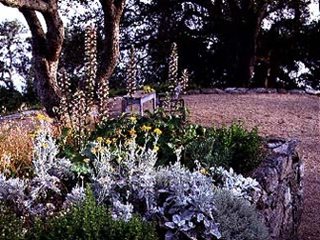 “I read books about ancient Roman gardens, Alexander Pope’s garden poetry, and writings on early America. I didn’t look at French gardens or other commanding designs with strong central axes. I was more interested in gardens that had form without being formal, gardens that were both rich and humane. I liked the exoticism of Rousseau, a painter whose landscapes have simple forms and luxuriant plants, some that exist in nature and some that are fanciful and dreamlike. When Kipp and I were first married, we went to Hawaii every year. As a transplanted Easterner, I was taken with California’s subtropical potentials as well as with the native landscape.”

Then Sherna explored her rugged acre, gradually discovering possibilities that lay in the tangle. “It was beyond getting to know the topography and which plants would tolerate the climate. Special places conveyed volumes. The longer you spend with a garden, the clearer it is. I was aware of the oaks, for instance, but I didn’t want to touch them. Now I see that pruning releases them, reveals what you’ve already found.” A trip to Italy marked the turning point for Sherna. “It stirred her Italian blood,” quips her husband. A predictable route for two designers might have been tours of Palladian villas and classical gardens in Tuscany, Rome, and the Veneto. But the Stewarts went to Sicily, ensconcing themselves in a village called Taormina. The scenery was a revelation. “For the first time,” says Sherna, “I saw a luscious, precipitous landscape like ours, where trees were used in a completely different way.” Instead of cypresses segregated in regimental rows, as in Tuscany, she saw them scattered among palms and olives. “I came back to Big Sur and planted 14 Italian cypresses and, later, palms. They interact beautifully with the terrain.” The idea wasn’t to bring Sicily to California, plant by plant. Rather, in Taormina she had discovered how to shape her own garden expressively, in keeping with its natural surround. 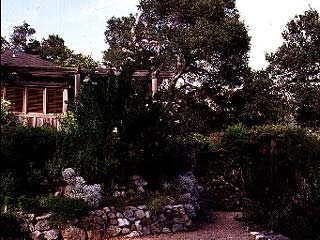 Although Sherna was the garden designer, she valued Kipp’s opinion. They had already worked together in the woods of Big Sur when he was designing the Ventana Inn, a quietly luxurious resort down the road, and she sought out his response to her plans for their landscape at home. The east flank of the cottage was uninviting. No door led outside; tall scrub and a skimpy walkway close to the building put this area off-limits. “You could look out at it from indoors, but you couldn’t enter it,” says Sherna. Against the bold forms of the Santa Lucia mountains to the east, the patch looked all the more undefined. It conjured up its opposite — Sherna thought of Colonial Williamsburg: “It’s just so tidy and orderly.” She remembered landscape paintings by old Dutch masters and abstractions by their modern countryman Mondrian.

Kipp only shrugged. “It was discouraging,” says Sherna. “My husband is a great designer with a fantastic eye, and he just couldn’t see the point of my idea. So I used my own money, from one of my landscape jobs, and for the first time I continued working on something that he didn’t appreciate right away. I put in stones, crushed-rock paths, and clipped-boxwood balls in the four corners of what we call the East Meadow. Six months later, Kipp noticed the design and complimented me on it. Ever since then I’ve felt free. That feeling of amplitude has paid off in my work with clients, too. Our garden is a laboratory. Recently I ordered 40 Haemanthus for a client’s garden — it’s a tropical plant with banana like leaves and coral flowers. I would never have done that without knowing something about the plant from my own experience.” 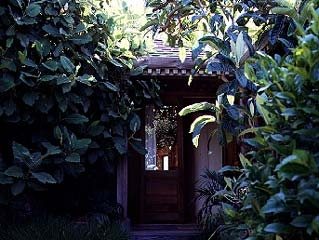 With enough money, anybody can turn a patch of wilderness into an instant garden. That is a different activity from making a garden that evolves over the seasons of your own life. Though Sherna rues years of apparent nebulousness spent “standing at one end of a hose,” she sees advantages in taking one’s time. “After 24 years, our place still has a lot of that wild feeling: Delicate native treasures remain. You are under no pressure to perform in a garden. If you go into it with a fixed idea, you’re set up for frustration. Especially when you are starting out, the garden is a place of exploration and insight. The end of a day or even an hour there is satisfying, whether you have been building a driveway or just picking a few dead leaves off a shrub.

Out of Sherna’s decades-long dilemma came a different idea of the garden, “Lately I’ve been thinking about an oasis,'' she says. ''An oasis is natural, not man-made. In a wild landscape it is a place of refreshment — a copse of trees, a secluded canyonn — some remarkable incident on the land that is not an intrusion. In an oasis you’re not breaking the harmony of the place; you are in companionship with the wild.”