A beautiful and necessary occurrence in the garden, Jack Frost transforms gardens into a glittery scene of ice and sleep while never being certain when the curtain will rise. From old wives tales to the Farmer’s Almanac, which are the best clues as to when the star of the winter months will make his first appearance? By Valerie Easton

Frost is a beautiful assassin. One wintry morning, we wake to a garden silvered with ice, the product of simple chemistry: water vapor forms frost when surface temperatures it comes in contact with are below freezing. Crystalline white replaces autumnal browns and greens. Tree branches glisten. Conifers look as if flocked for Christmas. The swaying inflorescences on ornamental grasses sparkle and shine like diamonds. My children used to vie to be first out the door to crunch their boots across the newly frosted lawn, leaving a trail of footprints. Frost transforms the world, and then melts away as quickly as chocolate on the tongue. 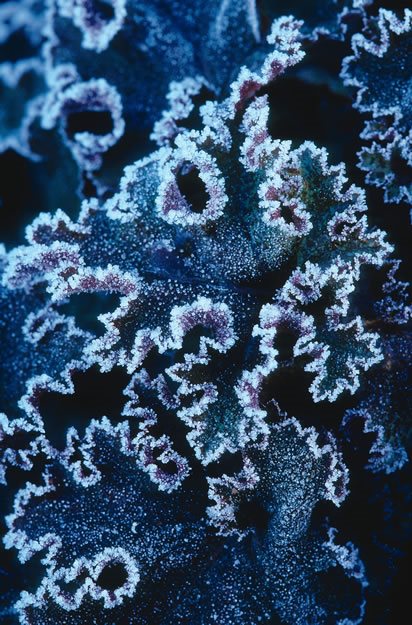 Many plants hold up quite well to a light frost, rebounding as the sun melts is away. Pictured: Heuchera ‘Chocolate Ruffles’. Photo by: Andrew Lawon/MMGI.

It also works constructive magic. Without a period of serious cold, tulips won’t bloom in the spring, and lilacs and peonies won’t set flower buds. Instead of killing parsnips and collards, frost sweetens them and is said to boost their overall quality. Frost also gives the garden a break from slugs, snails, aphids, Japanese beetles, and many weeds.

Although winter can be like a slap in the face after a warm, lingering autumn, there’s usually plenty of warning. Chilly fall mornings find roofs and evergreens delicately coated with sparkling white; then, as the day warms up, the garden rebounds, fluffs out, and continues to bloom and fruit as if never nipped. These light, teasing frosts can go on for weeks, but the time will come—in September, October, or even November, depending on your latitude and altitude—when the temperature dips into the mid-20s and a hard, killing frost will have its way with your garden. After weeks of frosty flirtation, this time most plants without a stout woody stem will be reduced to compost. Winter has arrived in the garden, no matter what the calendar says. 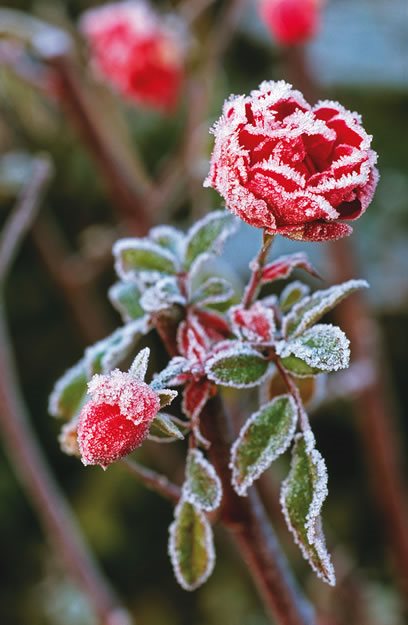 The last roses of the season. Photo by: Marianne Majerus/MMGI.

As soon as I’ve started to pull on warm gloves and a wooly hat before going outdoors, I’m on the lookout for hints of that first serious frost. In anticipation of its inevitable arrival, I dig the dahlias and cart pots of aeoniums and fragrant-leaved geraniums indoors. I rush out to pick the last raspberries and the “Sungold” tomatoes, turned sweeter by their brush with the impending freeze. I pull pots close to the house for protection and spread a blanket of insulating mulch over beds and borders. When the frost still sits lightly on the pumpkin, it’s time to pick the last of the zucchinis, tender lettuces and herbs, grapes, and green tomatoes.

Still, no matter how much I’ve prepared myself and my garden for that first killing frost, it’s a shock to wake up and find the entire scale and density of it all changed overnight by startling destruction. It’s as if frost turns the garden transparent, paring away the massings of summer to reveal the underlying structure. New and unexpected sights are exposed, and light penetrates the garden, the sunrays weak and slanting but welcome all the same. In most climates, frost comes and goes through the winter months, but its effect on the garden lasts until foliage returns in spring.

There are few more dismal sights than a lovely clump of coleus taken down overnight, but the arrival of frost brings plenty of pleasures, too. It turns conifers and ornamental grasses to tawny shades of bronze and russet. Hydrangea heads take on soul-stirring hues of burgundy, mauve, and mossy green. The subtle splendors of tree bark, dangling berries, pods, and cones come into their own once frost has done its work to expose them. Finally I see the birds I’ve only heard rustling through the tree branches all summer. My terrier runs around the garden barking wildly at foraging squirrels she’s suspected were there but hadn’t been able to get a bead on before the garden died down.

Before modern meteorological forecasts, people predicted weather by careful observation and memories of seasons past, much as gardeners tend to do even today. My mother, who taught me to garden, believed that her naked ladies, aka Belladonna lilies, foretold frost dates. She swore by an old wives tale that first frost hits six weeks from the date these pink lilies drop their blooms.

One reason to refrain from cutting back perennials at season’s end is to enjoy the architectural quality of their seedheads in winter, especially when rimmed with frost. Shown here is purple coneflower, sea holly and spent blossoms of Hydrangea paniculata. (Left) Photo by: Marianne Majerus/MMGI. (Center) Photo by: Andrea Jones. (Right) Photo by: Clive Nichols.

As far as I’m concerned, feeling the weather “in your bones” is as good a way to anticipate frost as any chart or map of averages. So is stepping outside on an autumn evening to sniff the air—in many parts of the country, a cold, clear night, with glittering stars and a brilliant moon, is a sign that frost is on its way. Will tomorrow be the day?

There are myriad types of frost, their quality and appearance dependent on temperature and the amount of moisture in the air. When the air is dry and the temperature barely freezing, frost can look as ephemeral as the lightest dusting of powdered sugar. At the other extreme is hoarfrost, which on cold, clear nights encrusts surfaces with a thick, white fuzz of feathery ice crystals.

In my part of the Pacific Northwest, we don’t often get hoarfrost. But one morning late last November my garden was coated in what looked like a dense albino pelt—could it be frozen fog? Each ice crystal was so long and thick that the frost looked pettable. A little urn holding sedum became an object of strange beauty when touched with hoarfrost, and I was sorry to look out at noon and see it gone, my garden now plain by comparison.

Then there is black frost, glazed frost, ground frost, and air frost. The rapscallion Jack Frost, an elfish creature of English and Scandinavian folktales, was held responsible for fern frost, the patterns etched across windowpanes on cold mornings. When I was little, it was a treat to help my dad scrape the intricate frost patterns off the car windshield. Sometimes the ice lay in fine swirls on the glass; other mornings it was as thick as fur.

Beware especially the frost pocket, which can damage even hardy plants. Because cold air sinks, it tends to pool in low-lying areas, creating spots where frost hits earlier and lingers longer. When a frost is brief, plants can bounce back, but if it lasts several hours or more, it ruptures cell membranes by freezing the moisture inside the leaves and stems. Plants then blacken and seem to melt, or in the case of perennials, die down and go dormant until the warmth of spring coaxes them out of the ground again.

But isn’t the first hard frost something of a relief? It signals an end to dragging hoses about, pulling weeds, and deadheading flowers. In fact, what I most appreciate about frost isn’t its fleeting beauty or its transformative effect on my garden. What I love best is how frost clears my calendar of routine garden chores as surely as it winnows out the plants in my garden. Only after a killing frost puts the garden decidedly to bed do I have guilt-free time to read a novel or go to the movies. The garden is at rest, and we are too, for a few months, anyway.

Maybe we should think of frost not as a great destroyer, but as something more akin to, say, rain or shade. We monitor drizzle and downpours for how deeply they penetrate the soil. We pay close attention to whether shade is partial, light, or deep, knowing it makes all the difference as to what can grow in it. Frost has its own variables and can be categorized by its effect on plants: In a light freeze the temperature dips just below freezing, to 29 degrees, killing only the tenderest of plants, including tomatoes. A moderate freeze, between 25 and 28 degrees, causes destruction of blossoms, fruit, and semi-hardy plants. A heavy or killing frost means the temperature has dropped to 24 degrees and below, bringing an end to herbaceous plants and the gardening season. If you’re a precise type of gardener who counts backward from the first killing frost to determine vegetable planting dates, check out the average frost-date map in the Farmer’s Almanac, which chronicles the normal averages for the first and last frosts around the country. Be aware, however, that there’s a 50 percent possibility of frost occurring earlier or later than these dates. Frost dates, though based on hard data, are really just a convenient way to look at seasonal weather changes.