An ecologically friendly Virginia garden sets the groundwork for a new approach to landscapes of enduring beauty. By Donna Dorian

When challenging new concepts appear on the landscape, the look of the new tends to shake up expectations until we realize that the new order is altering our idea of the beautiful. That is certainly true of the Tidewater residence in Virginia Beach, Virginia, where the celebrated landscape architectural firm Nelson Byrd Woltz of Charlottesville, Virginia, teamed up with architect William McDonough to explore the vocabulary of sustainable design. 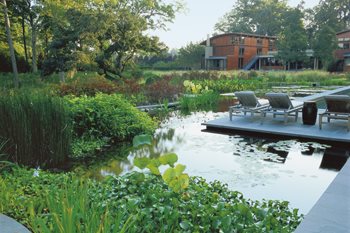 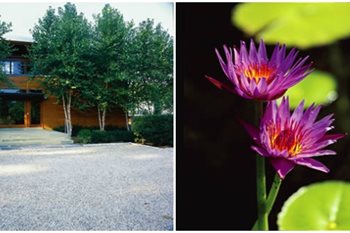 Landscape architects Nelson Byrd Woltz of Charlottesville,Virginia, designed an ecofriendly lap pool. It is set within a freshwater pond fed by recirculated rain water, and filled with fish and water plants. Photo by: Richard Felber. Left: River birch at the house entrance. Right: A water lily in bloom. Photos by: Richard Felber.

Over the years, the two firms have worked together on numerous projects where a careful response to the environment has been central to their shared vision. For Warren Byrd, the point has not been to impose the idea of the beautiful on the landscape, but rather “to work with indigenous plants and respect the natural geometries of the site”—to reveal the beauty of the particular. As the principal landscape architect at the Tidewater residence, Byrd worked with his clients to push the envelope of sustainable landscape design: to rehabilitate the property’s tidal cove, to design a freshwater pond and a green roof garden, to transform the overgrown woodland site into meadows, and to create an appealing means of storm-water retention through an innovative network of rills and canals. The result is a landscape of unaccustomed beauty that won the award of highest honor in residential design from the American Society of Landscape Architects. 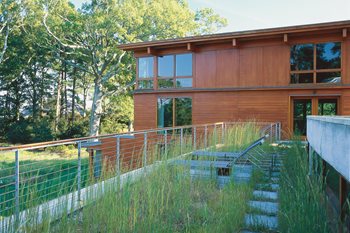 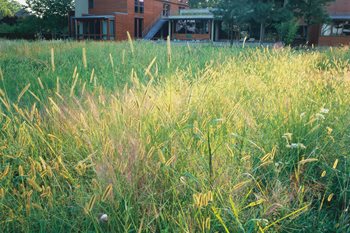 Planted with broomsedge and buffalo grass, the roof terrace offers a central view of the cove and the bay beyond. A mix of native grasses creates a meadow with a complex color palette. Photo by: Richard Felber.

Right from the start, the 7-acre site had much to offer. A tidal cove and a tangled marshland edge the property, which is situated along Lynnhaven Bay, a tributary of Chesapeake Bay. A confluence of complex ecological factors makes the Chesapeake the largest and most biologically productive estuary for aquatic life in the United States. While the expected move would have been to site the house along the waterfront, flaunting panoramic views from every window, the usual gestures had no place here. Instead, Byrd, who recognized the cove as the centerpiece of the composition, led the client to see the justice in tucking the house back into the landscape, respectful of Chesapeake Bay environmental regulations. This allowed him to rejuvenate the tidal marsh and promote the return of native grass wetlands, which after years of neglect had been overtaken by briars and rush. In turn, by placing the house in the midst of the property, he was able to orchestrate a series of pathways that opened the landscape up to discovery, leading to a pond, the waterfront and a meditative garden in the woods. 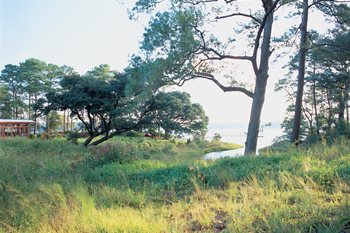 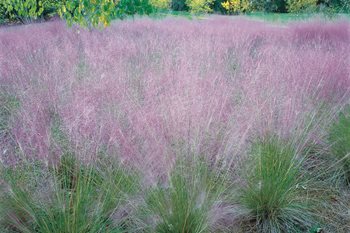 There was of course no place and no reason for common lawn grass. Trusting Byrd, the clients went along with his suggestion to plant a mosaic of native grasses—Andropogon virginicus (broomsedge), switch grass (Panicum species) and the stunning Muhlenbergia capillaris (pink muhly grass).The meadows that are slowly establishing, far from being neat and shorn, have a wild, natural beauty that is already stunningly Impressionistic. The environment has been transformed into a habitat for birds and animals, reinforcing an interest of the homeowners.

“The orchard, the meadow, and the vegetable garden of this new, contemporary garden pay homage to the cultivated garden of the agrarian past.” —Thomas Woltz

At first, the owners considered planting fruit trees, but when they realized how many chemicals were required for its upkeep, they instead chose serviceberries and Asimina triloba (pawpaws) because the fruits are a major attraction to wildlife. Already an osprey has made a home in one tree, and an eagle nests in the back cove. “My husband originally wanted to build an aviary, but it wasn’t necessary,” explains his wife. “The whole yard has become a living aviary. There are birds and millions of butterflies everywhere.”

Byrd also designed a lap pool that seems to float in a freshwater pond. Intended as a home for plants and wildlife, it can be seen as sustainable design’s response to the negative-edge pool. Sitting on the deck, one is in the midst of a water garden, surrounded by water lilies, iris, pickerel weed and lotus. 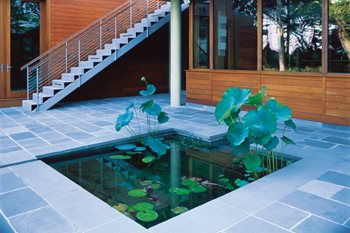 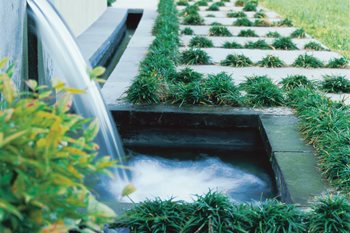 And whether one is conscious of it or not, the pond is the culmination of a water narrative that starts with a raindrop that hits the green roof and is then funneled into a water feature on the patio, adding the sound of water to the house. From there, the water leads to a rill and then a channel that traverses the yard to the pond. “It’s very much part of the bigger narrative of sustainability that governs the overall design,” explains Thomas Woltz, who worked with Byrd. All of which is an honorable gesture to make at the dawn of the 21st century—which in its attempt to preserve the memory of the historic landscape also sheds light on the future. 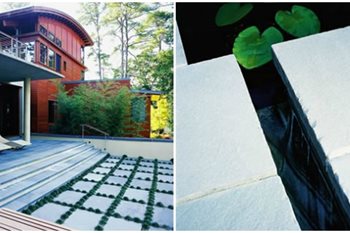 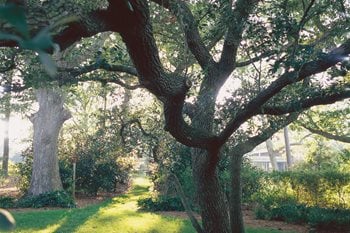 Warren Byrd has been designing landscapes for more than 25 years. Since 1999, his firm, Nelson Byrd Woltz, has received more than 30 awards for its public and private landscapes. Celebrated for his public projects at the Blandy Experimental Farm and the State Arboretum of Virginia, the Nike Europe, Middle East and Africa Headquarters in the Netherlands, and the new town of WaterColor, Florida, Byrd has helped set the bar for sustainable landscape design and preservation. A professor in the Department of Architecture and Landscape Architecture at the University of Virginia’s School of Architecture since 1979, Byrd has written widely on landscape architecture, and in 2004 was inducted as a fellow into the American Society of Landscape Architects.