A Caribbean Sugar Plantation turned Hotel Gets an Innovative Garden

On the Caribbean island of Nevis, the diverse styles of artists Helen and Brice Marden and landscape architect Raymond Jungles yield a singular vision. By Paul O'Donnell

Helen Marden fell twice for Golden Rock Inn. The first time came in the mid-2000s when Marden, an artist, and her husband, minimalist painter Brice Marden were looking for a new spot in the sun. St. Barts, the couple’s longtime haunt, had become “too crowded, too much art world,” recalls Marden, whose own style embodies the bohemian-chic aura that attracted those crowds in the first place. Friends suggested the relatively quiet Caribbean island of Nevis, a rough circle of beach and green forest that’s only seven miles wide. Its better-known sister island, St. Kitts, lies two miles away. At Nevis’ center, a dormant 3,200-foot-high volcano juts dramatically into the air. The Mardens capped their first visit with a drink on the terrace of Golden Rock Inn, a 200-year-old former sugar plantation halfway up the southeastern slope of Mount Nevis. 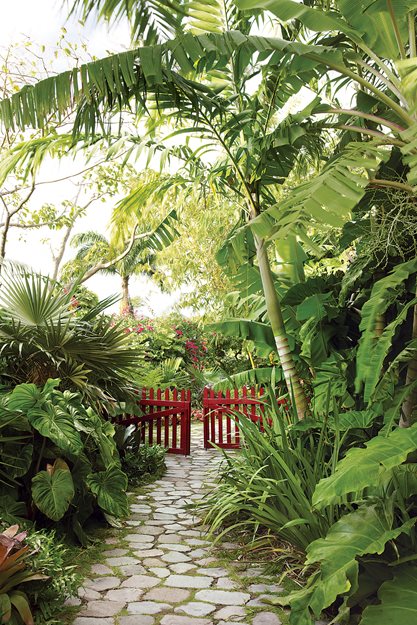 The garden at Golden Rock Inn is significant both for its innovative design and diverse, original choice of flora. Phase one of its creation included more than 150 different genera of plants. At last count, there were some 20 species of palm, including the rare old man palm (Coccothrinax crinita) with its hairy, Cousin Itt-like trunk and black spikes, which is available only at certain nurseries for a hefty price. Another, the talipot palm, native to India, is one of the largest in the world. The garden’s 35-plus types of trees include the baobab, the red silk cotton tree with its deep crimson flowers, the powder puff tree, and the aptly named sausage tree. Photo by: Marion Brenner.

Left: The entrance to Golden Rock Inn is purposely left junglelike and verdant.

The small hotel consisted of a set of gray stone cottages stepping downhill from the old refinery tower and a main building housing a restaurant. The interest of the owners, relatives of the partners who opened the place in the early ’70s, was clearly winding down; Marden remembers the place as “ramshackle, romantic.”

Before Marden knew what she was really getting into, she and Brice had bought the inn. “It was nothing rational or thought out,” Marden says. “My concern was to save the place from developers.” The bold move was “typical Helen” says her friend interior decorator Suzanne Shaker. So was Marden’s ability to see the possibilities of the place. “Helen has a way of really looking at something, really absorbing it,” says Shaker. “Her vision takes over.”

The idea that she would be running an establishment that welcomed the public didn’t occur to Marden until she had already made the leap. “We’re not really social people,” she says. “It was a little like falling in love with the wrong person.”

The second fall was quite literal. Gawking at a film set while walking near her Manhattan home, Marden stumbled into a pothole and broke her foot. Confined to her apartment, she holed up with gardening magazines and landscape design books, hoping to find some ideas for the grounds in Nevis. She had already hired architect Edward Tuttle to expand the hotel’s terrace and create a gazebo surrounded by rough-walled pools. What had been an overgrown patch of greenery leading from the parking area to the restaurant, tended by foraging goats, was now an excavated construction site awaiting transformation. 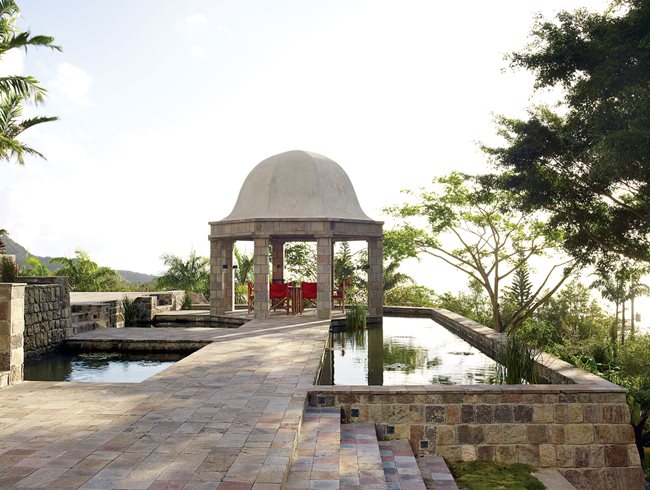 After purchasing Golden Rock Inn, the Mardens commissioned architect Edward Tuttle to expand the terrace and create a dome surrounded by reflecting pools where guests can take in the garden while dining. Photo by: Marion Brenner.

Marden had never thought about how to plan a garden. At the couple’s house in Greece, she lets the abundant rosemary and lavender have its way; her husband is the chief gardener at their place in the Hudson Valley. “I didn’t know anything,” she says. In her reading, she struck upon the Ward garden, a subtropical fantasy in Coral Gables, Florida, that is the work of landscape architect Raymond Jungles. She and a poet friend composed an e-mail to Jungles, who called back within half an hour.

The client and designer were not an obvious match. Jungles is known for planting specifically species native to the subtropical world; Marden makes such no distinctions. At this point, she says “everything is everywhere.” And when it comes to aesthetics, “Helen likes the wild look,” says Jungles. “She describes it as ‘nature almost winning.’” For example, when Jungles argued for removing some Norfolk Island pine trees that he says lost their symmetry in storms, Marden disagreed. “I think you need a jarring note,” she says, “Not everything needs to be symmetrical.” Ultimately their collaboration resulted in a genuine friendship and a unified design that reflects their disparate approaches: The garden beautifully paces its changes in color and texture but retains a brave unruliness.

Jungles’ first task was to preserve an enormous weeping fig that guarded the walkway to the hotel. “We sculpted the tree and created a view,” he says. With this tree as the center point, he planted the larger material, primarily Copernicia macroglossa (Cuban petticoat palm) and Aiphanes aculeata (ruffle palm). He then filled in the rest of the space with smaller plants Marden picked out on their three nursery visits to Miami. “Helen likes things with spikes and unusual-looking flowers,” says Jungles. “Things that are simply pretty she wouldn’t go for.” She was delighted to discover the almost absurdly graphic plants called cycads and became an avid collector, even buying a neighbor’s collection of orchids and cycads for the next phase of the garden. That second stage of the project, which is currently underway, will add another acre of garden around the guest cottages. The initial phase, meanwhile, covers two-and-a-half acres and is the first thing guests see as they approach the inn from the parking lot.

Marden’s eye for the unexpected announces itself in her decoration of the buildings at Golden Rock as well. From the menus to the fabrics she uses in the restaurant, “Helen totally changes the way you see color and how you use it,” says Shaker. “She has such an understanding of light.” Marden dismisses the notion that she and Brice used their training as artists when it came to remaking the inn. “We’ve just gotten to an age where we know what we like,” she says. 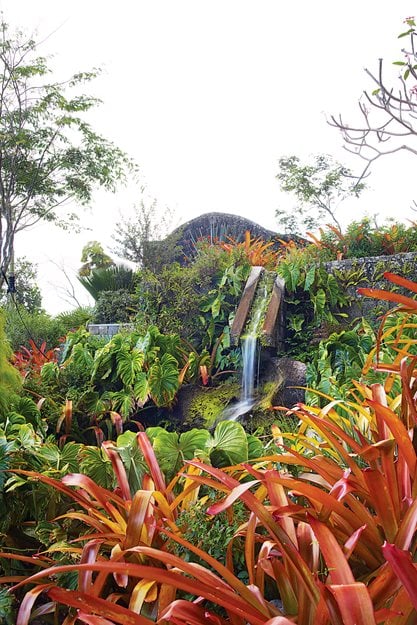 A colorful explosion of Aechmea blanchetiana ‘Orange Form’ and Philodendron magnifica surround a water feature, made from a historic wall that once carried water to the original plantation house’s cistern. Now a stream pours from a wall-top rill onto a sculpted boulder then cascades into a rocky grotto. Photo by: Marion Brenner.

Yet the look of Golden Rock certainly suggests a highly cultivated eye at work. The red on doors, furniture, and other woodwork was perhaps Marden’s most painterly decision (and her most controversial: She says she has heard grumbling from Northerners who expect the Caribbean to come only in pastels). “I tried a lot of colors,” she says. “I had to get the right weight color with the stone.”

Jungles too treated the site like a blank canvas. After all the plants arrived from Miami, he staked the grounds with paint wands and flags. “Basically drawing, but in three dimensions,” he says.

Brice Marden became most involved when it came to arranging a number of enormous boulders that had been turned up by the excavation. With characteristic precision, the artist endlessly plotted and debated the placement of the rocks with Jungles and his team. “I stayed up in the house for that,” says Helen Marden. “There were enough egos out there.”