The greenhouse makes a comeback in some surprising places. By Rachel Swaby

If there is an archetype of a greenhouse, it is surely Joseph Paxton’s masterwork. Built to house the 1851 Great Exhibition in London, the famous Crystal Palace covered 19 acres of the city, making it the largest greenhouse ever built. Though the building was primarily an exhibit space, Paxton was a gardener before he was an architect and developed his technologies to keep exotic plants alive through British winters. His innovation of prefabricated wrought iron hung with plate glass (the Crystal Palace used 293,655 panes — one-third of the glass produced in England that year) dominated greenhouse design for a century. 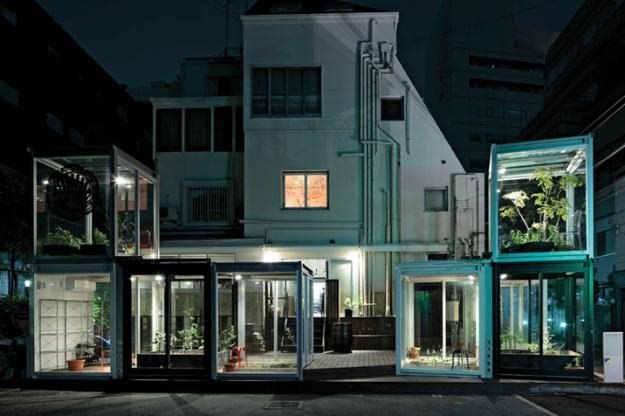 In a crowded Japanese cityscape, glass boxes by ON Design Partners are stacked like the urban towers that surround them. Inside, discrete plantings provide a connection to nature and fresh vegetables for nearby restaurants. Photo by: Koichi Torimura.

Today, architects, artists, and design firms have reimagined these indoors-in-the-outdoors spaces, creating innovative structures through a smart use of materials and a creative approach to available space. While wide-open yards with ample sunlight are ideal, they’re not always part of a gardener’s reality, so thoughtful engineering has brought modern structures to rooftops, rock faces, and urban environments.

If you have just a few sun-drenched square feet—in a yard, on an exterior wall, or on a roof—you have space for your own botanical paradise. In Japan, ON Design Partners created a set of small stacked iron-and-glass cases in 2010 for an urban farm in central Tokyo’s tightly packed Roppongi district. (Above.) The food that grows inside makes its way to the restaurant next door. And when Amaury Gallon of Jardins de Babylone teamed up with the Flower Council of Holland, he designed four pop-up gardens to be sprinkled throughout Paris. For the three-day installation, he created a series of translucent plastic domes that were easy to assemble and take down. The largest of the series was a 430-square-foot enclosure in the Place Colette filled with orchids. He’s since gotten requests for temporary bubble gardens in the United States and London.

The versatility of plastic and its high strength-to-weight ratio make it a favorite of today’s designers, and it’s typically a better insulator than glass—even double-paned, sheet glass has a tiny fraction of the insulating value of a material like polycarbonate. But for durability, longevity, and clarity, tempered glass is hard to beat, and the technology continues to advance. New low-emissivity glass, developed in the last decade, is better at trapping thermal energy while still allowing enough light for plant growth. Even standard glass can be strengthened with coatings and made into a better insulator with layering. 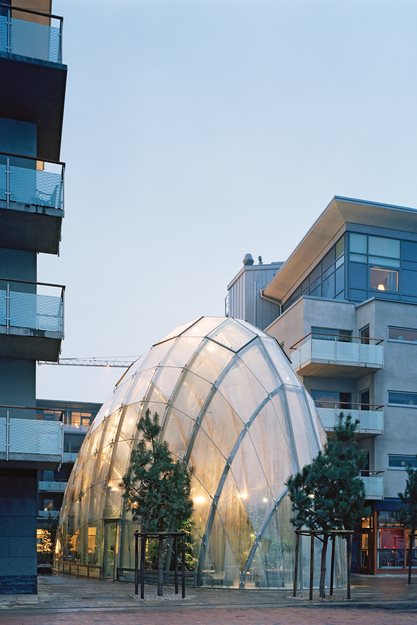 In a weather- and sunlight-challenged courtyard in Sweden, a strikingly modern greenhouse by Gora Art & Landscape offers a tropical oasis. Photo by: Ake Eson Lindman.

Laminated glass is the star of a greenhouse built in a windy and shaded space by the sea in Malmö, Sweden. Monika Gora of Gora Art & Landscape created an airy structure—inspired, she says, by the Crystal Palace—for residents of a retirement community. (Above.) In a narrow and dark courtyard, her glass-and-steel arch provides enough light for the palms, magnolias, and lemon trees inside while also blocking the strong wind from the courtyard behind it. “They wanted to make something spectacular because there are a lot of people passing by,” says Gora. “They wanted to show off a little.”

In environments where densely packed buildings have squeezed out backyards, roofs have stepped up as a place for plants. When Pittsburgh’s Studio d’ARC architects were asked to replace a dilapidated 1970s greenhouse built atop a downtown Victorian, they created a saw-toothed top to maximize solar gain. “The windows on the side are like little gills,” says Gerard Damiani, president of the firm. “Open them on a hot summer day and air will rush out.” In order to keep the space warm during the cooler months, Studio d’ARC put glass where it would maximize sun and topped the room with super insulated zinc panels. An energy recovery ventilator pipes the sun-warmed air down to the two apartments below, pulling fragrant air from, say, rosemary in the edible garden into the living spaces. The result is a green and modern space for both plants and people.

Greenhouses can be more than a means to grow fresh produce, protect sensitive plants, and get a head start on spring. They also allow an avid gardener to cultivate a personal paradise year-round, no matter what the local hardiness zone. 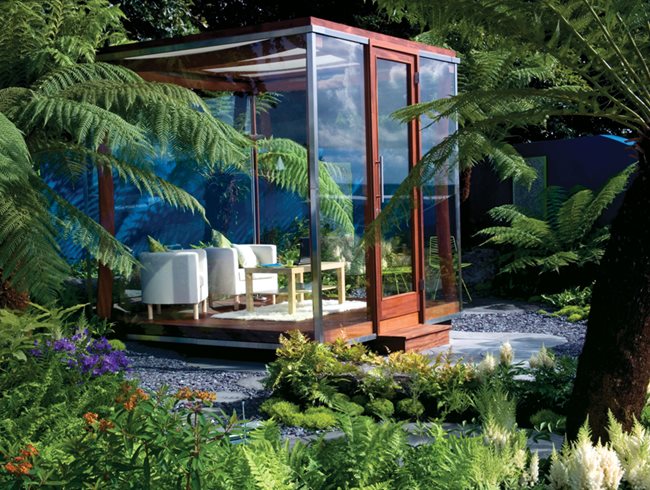 Greenhouses not only create growing spaces for gardens but for gardeners, blurring lines between indoors and outdoors, as in this whimsical inversion by Phillippa Probert at the Royal Horticultural Society Tatton Park Flower Show. Photo by: Liz Eddison.

New materials and innovative designs mean just about anyone can have a room full of the tropics at their disposal, but there are basic guidelines for creating a successful greenhouse. A landscape architect with a love for orchids and oranges will be an invaluable source of wisdom.

Sunlight: Greenhouses need six to eight hours of light per day, all year long. Ideally, at least one glass side points south, though west and east can work with some clever engineering.

Obstacles: Remember that trees and buildings along the horizon cast deeper shadows in the winter when the sun is lower.

Ventilation: Experts say 15 to 20 percent of exterior surface area should be vented. Control can be manual, automatic, or miraculous (as in heat-sensitive materials that expand in heat to open panels). Poor ventilation creates a host of expensive and plant-killing problems, so consult an expert.

Materials: Glass is clear. Most plastics aren’t. But plastic is the better insulator, and plants don’t need the view—diffused light works just fine for them.

Seating: If you have the room, factor in a place for yourself as well as your plants. 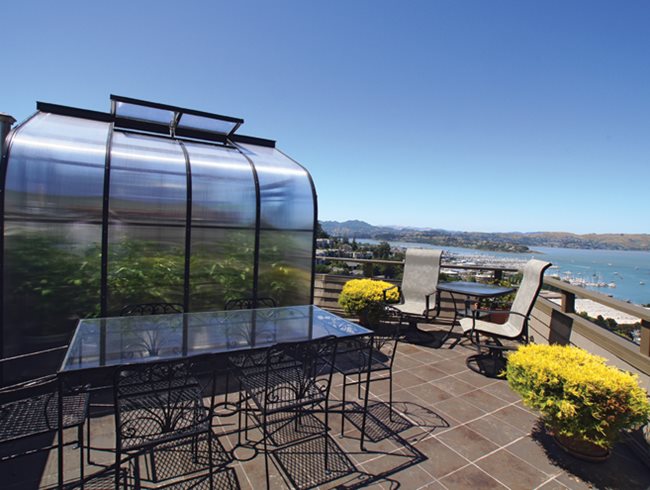 Prefabricated parts—a greenhouse technology that debuted with the Crystal Palace—make for stylish designs such as this rooftop model by BC Greenhouse Builders, putting a year-round garden in reach of anyone with a source of sunshine. Photo by: Jim Gregory.

Clearly, a greenhouse would make your gardening life complete—at least through the next frigid winter—but if you’d like to know exactly what you’re getting into before you start pouring concrete, look to the following companies. In addition to custom greenhouses, U.K.-based manufacturer Hartley Botanic (hartley-botanic.co.uk) sells a variety of structures in styles ranging from grand Victorian to the compact patio model, ideal for urban dwellers with limited space.

Though installation is an option, BC Greenhouse Builders (bcgreenhouses.com) offers DIY greenhouse kits available in both free-standing and home-attached form. For those unsure of their carpentry skills, the kits arrive with written instructions and a how-to DVD. The finished products are made to withstand 30 pounds of snow per square foot and 80-mile-per-hour winds.

Tanglewood Conservatories (tanglewoodconservatories.com) designs bespoke greenhouses; it has crafted old-world conservatories made to fit trees more than 20 feet tall as well as modern, geometric structures of cedar, glass, and stone. See some of their custom-designs here.

Amdega (amdega.co.uk) builds greenhouses in the tradition of the classic orangery—a glass building where citrus trees are brought to overwinter—in both iconic Victorian and contemporary models.