Expert advice on planning and designing an outdoor cooking space. By Norman Vanamee

Why do bad outdoor kitchens happen to good people? It’s a question I ask myself every time I walk around otherwise gorgeous residential landscapes and see poorly planned grill islands, view-obscuring pizza ovens, and homely rows of unnecessary appliances. It’s a question I ask myself when I stand in front of the grill at my own family’s vacation house and can’t find a place to put a spatula, let alone a plate of food. I’ve seen enough bad outdoor kitchens that they now fall into recognizable categories for me, including something I call the Mushroom, that oversize island that looks like it appeared suddenly after a heavy rain; the Utterly Inadequate, which is epitomized by my family’s Weber standing all by itself on our big back terrace; and the Full Vegas, a category that doesn’t really need an explanation, except that the words “retractable television” are often involved. 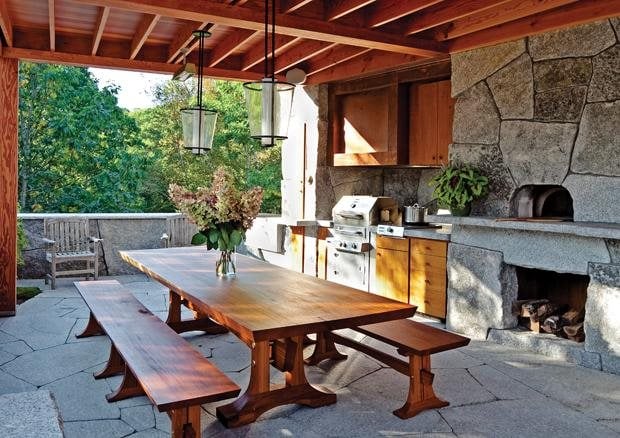 The owners of this Camden, Maine, home love to throw large dinner parties, so Rockport-based designer Deborah Chatfield kept the design simple. “They wanted the feeling of Tuscan loggia, so we used stone and had our cabinet maker build a long wood table,” she says. Photo by: Tim Street-Porter.

I can recognize a bad kitchen, but that doesn’t mean I know how to design a good one. To help me understand how, I turned to people who do. Here’s what I learned from Russ Faulk, vice president of product development at Kalamazoo Outdoor Gourmet, a company that makes grills and other appliances; Eric Groft, principal at the landscape architecture firm Oehme van Sweden; and Mark Scott, principal at his own landscape architecture firm, Mark Scott Associates.

1. Plan, Plan, Plan
All three experts agree that poor planning explains most badly executed outdoor kitchens. “It’s almost like some landscape designers are annoyed by having to put in a kitchen and it becomes this thing that gets shoved in the corner,” says Faulk. “They’re left as an afterthought, and then the budget is limited,” adds Groft.

2. Make It a Group Effort
Layouts, utilities, countertop choices — installing an outdoor kitchen is complicated, but too often the entire project is left to a single designer or builder. “You want a dialogue between the homeowner, landscape architect, builder, and appliance person,” says Faulk. Scott sits down with everybody in the household and quizzes them: “How do you envision yourself using the space? What will you cook?” Kalamazoo gives clients a 21-point questionnaire. “Most people don’t know what size sink they want until you talk through what they’ll do with it,” says Faulk.

3. Keep Abreast
Appliance features change dramatically from year to year. Make sure you, or somebody who is helping you, have a firm grasp of what’s available. “A designer said to me recently that her client didn’t want an outdoor fridge because she didn’t want to have to bring it inside during winter,” says Faulk. “The only thing you have to do to winterize our fridge is turn it off. So she wasn’t familiar with the technology.”

4. Look Around
“Take clues from the landscape,” says Groft. “The materials you use should be dictated by the home and its surroundings.” Faulk agrees, “The best way to blend in a new kitchen is to build it with the same trim and stone that are used on the house and in the landscape.” And beware inexpensive solutions. “Stucco is cheap, and builders love it because it’s easy to use,” says Faulk. “But if the only place you have stucco is on your outdoor kitchen, it’s going to stick out.”

5. Think Proportion
“If you have a large home and a tiny exterior kitchen, it can look like a wart on an elephant,” says Faulk. The opposite can also be a problem. “Don’t let counters get too big,” Scott says. “A long counter has the same [volume] as a Volkswagen. If the transitioning [from the home to the outdoor kitchen] is not done well, it will look like a beached whale.” Smart designers incorporate numerous structural elements to make a kitchen fit into its surroundings, including pergolas, screens, and plantings. 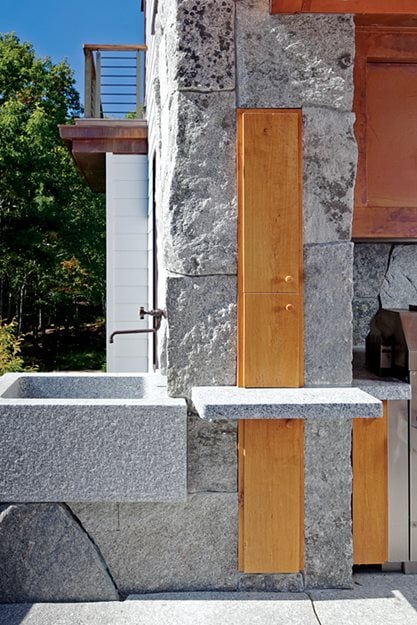 Cabinets and a sink are located close to the grill but out of the way of the main entertaining area. Photo by: Tim Street-Porter.

6. Focus on Flow
What exactly is “flow”? “It’s smart design decisions,” says Faulk, “like making sure that people at the pool do not have to walk past a hot grill to get a cold drink. It’s figuring out where you will prep food, where you’ll put food after you take it off the grill, and where to put a dirty pot.” Flow should be tailored to the client, says Scott: “Who will be cooking? Do they want to be apart or in the center of things?”

7. Let There Be (a Lot of) Light
“The single biggest mistake people make is to not have enough lights,” says Faulk. “It’s hard to see food cooking on a grill at night, so you need bright task lighting.” It’s also hard, and unpleasant, to eat food if you can’t see it. Kitchen areas that are also dining areas should have ambient and ornamental as well as task lighting. Adds Scott, “Make sure it’s all adjustable and dimmable.”

8. How Much Is Too Much?
Warming drawer, wine tap, dishwasher — there’s an outdoor appliance for every culinary fetish. Deciding what to buy is the (potentially) million-dollar question. Keep it simple, advises Groft: “When you’re not using it, you end up wanting it to go away.” For Faulk, it’s about frequency. “If you’re only going to cook in something once a year, then you probably shouldn’t bother,” he says. Scott is more flexible on this: “A client had me install $80,000 worth of equipment. She doesn’t cook herself, but when she entertains, she wants her caterers to have everything they need.”

9. It’s About the Cooking
“Part of the joy  of outdoor cooking is doing things you can’t do indoors,” says Faulk. Think about what you’ll need to sear steaks over incredibly high heat, smoke slabs of ribs for hours and hours, or cook pizzas in a blazing-hot oven — all tasks well-suited to outdoor kitchens.

10. It’s Not About the Cooking
“Look, I would grill my Cheerios in the morning if I could,” says Scott. “However, the big thing about today’s outdoor kitchen is how the spaces can be crafted for outdoor living. Now you can watch television in your outdoor kitchen, pull down weather shades, and turn on a heater if it gets cold. Just as the indoor kitchen is a place to hang out, so now too is the outdoor kitchen.” 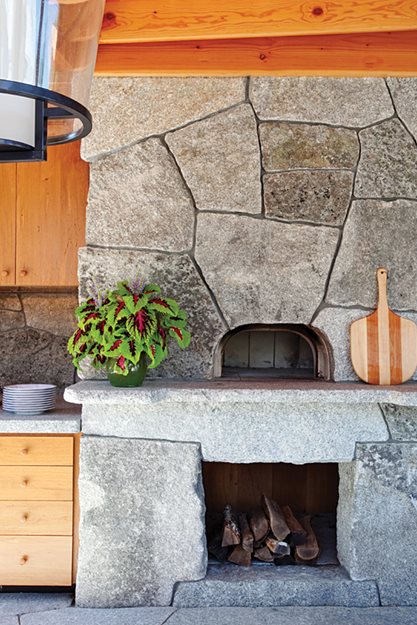 Pizza-making is a favorite activity, so the wood-fired oven (purchased in Italy) takes center stage. Photo By: Tim Street-Porter.