Prairie Modern: A House and Garden in Fargo, North Dakota

A thoughtful collaboration between Stahl Architects and Land Elements produces a landscape that celebrates old and new, in Fargo, North Dakota. By Chelsea Lobser

I’d seen snapshots of Dr. William Wosick’s home outside Fargo, North Dakota, but I wasn’t prepared for the impact it would have on me when I showed up to photograph it. After driving past identical-looking mini mansions perched amid tidy lawns — by far the dominant motif in this part of the Upper Midwest — I pulled up across the street from a striking cedar-and-steel-clad structure. It consisted of intersecting horizontal, vertical, and diagonal planes rising gracefully from an unusual tree-fringed landscape. As I walked up the driveway, camera gear in hand, I was filled with the sensation that I was leaving suburban Fargo behind and entering an intensely private realm. 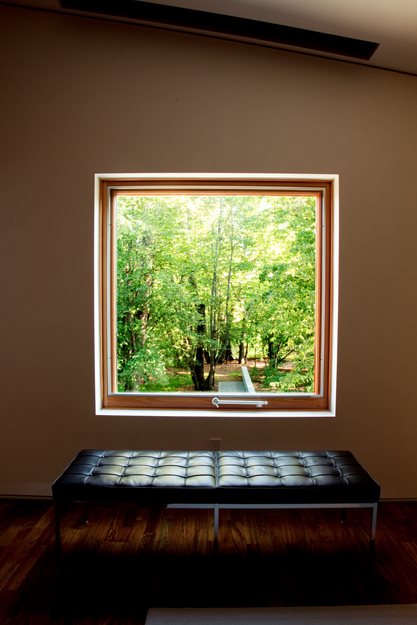 Fargo, North Dakota is prairie country where Dr. William Wosick's state of the art modern home in the wilds of this rugged country demonstrate the dynamic contrast created when strict lines blend with the serendipity of the natural world. He sought a dwelling suited to his collection of modern art for a perfect milieu of structure and space. Here the owner and architect had planned a solid wall, but while in the framing stage the forest beyond proved so compelling the window was added. When interior spaces link to the world outside via such openings, there is a powerful sense that the exterior spaces are purposefully integrated into the structural design. Photo by: Chelsea Lobser.

Wosick, a diagnostic radiologist, greeted me warmly. “I know you need to take advantage of the light,” he said. “Just come inside when you want a break.” Then he left me to discover the property on my own. As Garden Design’s photo editor, I have seen many gorgeous homes and gardens, but everything about this place seemed new and special. To my left was a pretty swath of native prairie blue grama grass edged by sleek rectangular planters from which taller grasses grew. I noticed the boxes were made of the same light-gray sheet steel that covered parts of the house itself. Towering over the house’s south face was a magnificent bur oak, and to the right of the driveway I saw a crescent of turf flanked by screen walls, focal plantings, granite pathways, and, in the background, an emerald curtain of lush woods that extended down to the banks of the Sheyenne River. I recalled Wosick telling me his property sat on just over an acre of land, but it just didn’t seem possible that all this variety could fit into such a small plot of earth.

As I toured the grounds, I found myself as impressed by what was not there as by what was: no sprawling lawn ringed by privet hedges, no rhododendrons or showy ornamentals and, most interestingly, very few neatly symmetrical plantings and architectural elements. In their place were elegantly-arced walkways that mimicked the contours of the house; huge, glacier-smoothed boulders, partially hidden by foliage, that served as benches; tufts of native grasses and wildflowers, including prairie dropseed and purple coneflower; and a knee-high “fin wall” of that same gray steel extending some 45 feet from the house and echoing its clean, geometric lines. The vibe was serene, and as I watched the prairie grasses sway in the breeze, the wheat fields near where I grew up in Ohio came to mind, and I suddenly felt strongly attached to this place. 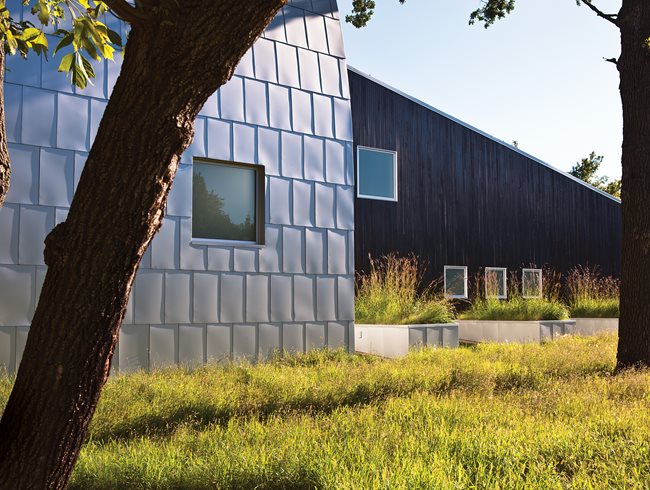 This view shows how well the individual raised planters break up the base of the large wood building wall into glimpses of open space or views through the grass flower spikes. The metallic panel walls are treated differently, perhaps due to their resilience when plants grow right up to the foundation. Here blue grama, one of the most common local perennial prairie grasses is shorter and well suited for a large swath beneath the trees. It's the fine textured appeal of grasses that makes this composition sing; with each component standing out in sharp focus. Photo by: Chelsea Lobser.

Later, inside, Wosick explained that he’d commissioned the home in 2003, hiring Fargo-based Stahl Architects to create the house and another local firm, Land Elements, to design the landscape. They visited 10 sites before selecting this one, and during the two-year-long planning and design phase the principals of both firms met with their client weekly — an intense collaboration. “I knew I wanted to build a structure that would fit into the existing landscape, not impose,” Wosick says. “North Dakota is a prairie, and I wanted to be mindful of that fact.” Before the house was even sited on the property, he added, Land Elements completed a full tree inventory and evaluation of the land so they could build in deference to the surrounding nature.

As for the house , he wanted it to have the feel of a gallery — a place to display his large collection of contemporary artworks, including a number of abstract paintings. He is a fan of the German artist Josef Albers’s Homage to the Square series, which partly inspired the crisp geometries of the house’s design. “Geometry is extremely important to me,” Wosick told me. “It’s clean; it’s pristine — there is nothing left but the simplicity of it.”

As my host showed me around the house, I marveled not so much at the art on the walls, though, as at the views that lay beyond. Outside every one of the home’s huge Loewen picture windows (see “Creating a Room With a View,” page 39) were stunning natural vistas and not even a sliver of a neighboring home. In the main living area, a whole corner of the house seemed to dissolve thanks to floor-to-ceiling windows that allowed a 90-degree view of the riparian woodland outside. “I wanted to have visual passages through the house,” Wosick says as we stand in a soaring atrium looking up at stacked square windows. “And I wanted to look out and experience the sense of the outside even when the seasons don’t allow it. The outside is so beautiful to me, and windows are picture frames for the artwork of nature.” 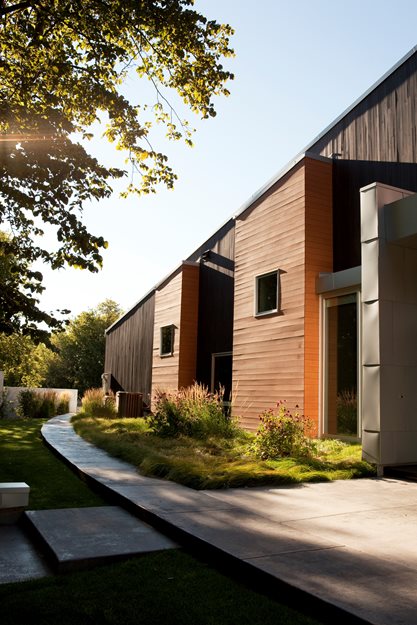 This side of the house is less monolithic with these extruded surfaces and larger windows. Planting here is more diverse, with designers relying on prairie perennials perfectly adapted to growing within vast stands of native grasses. These flowering plants are the only color in this landscape not part of the building itself. The tall prairie coneflower with its beautiful magenta blossoms and black-eyed Susans bloom over summer, then the cone shaped seed heads bring hungry birds close to the windows for uninterrupted observance. Photo by: Chelsea Lobser.

Indeed, the outdoor scenes were like perfect little vignettes, as if the terrain had shifted to fit the window frame. Often it was quite the opposite, says Phil Stahl of Stahl Architects. “We were literally standing there during the building of the house, looking through the studs and saying, ‘I want to see these trees,” he says, and then designing the room accordingly. Every room and every window was configured with seasonally changing views in mind and with the aim of bringing the outside in. Both Stahl and the landscape architects at Land Elements say they consider Wosick’s home to represent a sort of watershed moment for their practices. “Lovers of modernism started coming out of the woodwork after that,” Stahl says, “And Land Elements had a similar experience, with people suddenly asking them about native plantings.” Stahl adds that having a client who was so involved in the process proved to be a great asset. “Bill really understood composition and balance,” he says. “He’s a big reason it turned out so well.”

As for Wosick, the benefits are all around him — all year round. “It’s an ever-changing landscape,” he says. “Fall and winter are so beautiful too. At night, you can see northern lights dancing above the trees.” That would be something to come back for, I thought as I took a few last photos and said goodbye.