Renovating any garden is difficult. If it has a long family history, the task is tougher. Christy Hobart reveals her struggle to stake a claim on her grandmother's old turf, and unveils the plan for its future. By Christy Hobart 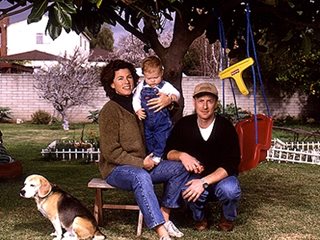 This morning, as I rinsed my coffee cup in the kitchen sink, I looked through the window, past the blue-and-white-tiled backsplash, and saw red camellias that are almost as old as I am. My grandmother planted those bushes some 30 years ago, soon after she inherited this 1950s bungalow in Santa Monica, and she looked out on them three times a day while she did the dishes. She'd watch the blossoms grow, from bud to flower, and always clipped a few when they were ready for a vase.

When my husband, Henry, our son Ben and I moved into the house last year, a few years after my grandmother passed away, one of the first things we did was install a dishwasher. Now I'm wondering if that modern convenience was such a good idea. Will I ever make time to admire a camellia bloom? 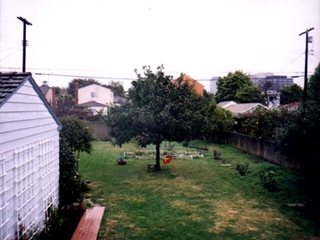 I'm so attached to this house and my memories of it, the weekends and Christmases and Thanksgivings and birthdays spent here, that it's hard for me to make any changes without feeling a pang of nostalgia, even remorse. Removing the carpet to reveal original hardwood floors was easy, but choosing a different drawer, closer to the dishwasher, in which to store my silverware was not. Even more difficult is deciding what to do, or not to do, with my grandmother's garden. This land has been in my family for about a hundred years. My great-great Aunt Lottie farmed begonias on it. In my grandmother's heyday, it was a jungle of camellias, roses, and fruit trees so dense that we grandchildren used to play hide-and-seek in it.

Of course, gardens are not static. As my grandmother's health began to wane, so did her garden. And by the time I moved in with my new family, there was little left: just a wide expanse of lawn, sprouting more weeds than grass, and my memories. The roses were still here, but without the path they used to line. They looked  like a scraggly allée leading nowhere. The camellias were struggling, and failing, to hide the concrete walls behind them. The citrus trees were thriving, though, against one wall. And the magnolia had grown to majestic proportions, providing a bit of shade and a branch strong enough to support Ben's swing. 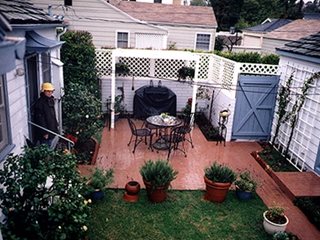 Neither Henry nor I had ever had a garden before, having spent much of our adult lives in Manhattan, and we were naively thrilled with the challenge. Although I didn't want to disturb any of the existing plants, I couldn't wait to add new ones. So last spring we threw ourselves into learning everything we could about the vines, shrubs, herbs, trees, and bulbs that grow here in zone 10. We started planting whatever grabbed our fancy: some nasturtiums here, morning-glories there, a few buddleia, stephanotis to train up a pole. It was our year of discovery, of getting to know our land, our sensibilities, our capabilities, and our limitations.

Our problems were never horticultural. The four Melianthus major filled out nicely against the back wall. The sweet peas climbed the trellis we propped against the garage. The Verbena bonariensis did indeed rise above the small patch of French and English lavender. I even let Henry prune Grandma's guava tree with his new Fiskars bypass lopper, and it looked much better for it. We tended a few lovely plants. But we never made a garden. After all that effort, we were still faced with an overwhelming 93 by-63 foot piece of flat land in dire need of cohesion and direction, a master plan. 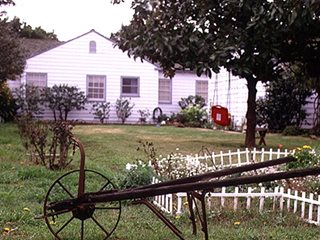 Henry and I were wary, though, of hiring someone to take over completely. We wanted our garden to be our garden, a place where we could play, experiment, and relax — not some untouchable Design. While scouting L.A. in search of stories for this magazine, I had become familiar with the work of Barry Campion, and I loved what she had done in other people's backyards, laid-back, realistic gardens that managed to express their owners' sense of style. But I had always assumed that hiring a professional meant giving up control. So when I learned that Campion's firm offered simple one-hour consultations, for only $100, I immediately called to set one up.

When I spoke with Campion on the phone, she suggested that Henry and I first draw up a list of ideas and questions, and mark images in books and magazines that appealed to us. During this exercise, we found that we wanted many of the same things: a (smaller) lawn for Ben, some shade for the two redheads in the family, a vegetable garden, a cutting garden, paths bordered by interesting plants, a secluded sitting area. Though it was clear that Henry would be willing to scrap everything to achieve our goals, I wanted to work around what my grandmother had lovingly planted so long ago. 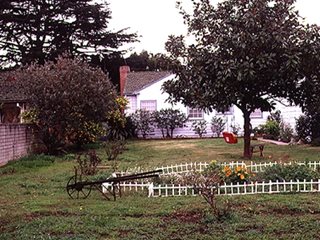 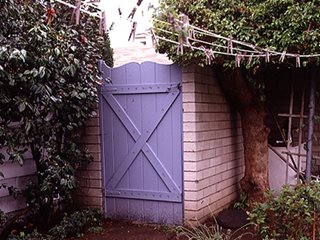 A few weeks later Campion arrived on our doorstep. Dressed in casual pants, work boots, and a T-shirt, she seemed more hands-in-the-dirt gardener than haughty artiste. And she spent the first part of the meeting listening to what we wanted and asking about our site: its sun (full), soil (extremely compacted muck), and specific problems (two beagles who pee everywhere). Then, as we walked through the yard, she began making suggestions. "The first thing I would do," she offered diplomatically, "is soften the penitentiary look by planting hedges in front of those concrete walls." Yes, great. I couldn't have agreed more. Her second idea, however, was not what I wanted to hear. "This magnolia tree is planted in a really strange spot," she said gently. "How would you feel about getting rid of it?" I quickly defended my grandmother's choice: "It provides shade, and you can look out onto it from indoors. Besides, it's the only tree we have with branches big enough for Ben's swing." I understood Campion's position (part of me even agreed) but I wasn't ready to let go of what Henry calls my "generational issues." We did, however, go ahead and hire her to draw up a plan.

Two weeks later it arrived on my doorstep. I stopped everything I was doing, quickly opened the envelope, unfolded the blueprint, and hungrily scanned the drawing. Ah, she wants to expand the patio area. Nice. And the lawn will end with a lovely hedge-lined semicircle. Oh, and she put a gate here to keep the dogs contained. That's smart. A wonderful curved path with big borders on both sides, and a sitting area in the back. My vegetable plot must be here and I guess that's the cutting garden. It was looking great. And when I figured out that "ex" didn't mean a tree would be eliminated (it stands for "existing"), I knew I'd hired the right person for the job. Campion had created a glorious plan that not only worked around my grandmother's magnolia, but also actually made the tree the beating heart of the entire garden.

Henry and I have since met with her again to go over every inch of the blueprint. We can now visualize the winding path through lush, cool-hued plantings, the cornstalks that will rise above the other vegetables in my potager, the hidden spots where we'll stretch out with the paper on Sunday afternoons. We can picture Ben chasing the beagles around the lawn, and almost hear the fountain gurgling at one end of the patio. None of this exists yet, nor will it for quite some time. We didn't buy an instant garden; we bought a road map. There's still soil to amend, an irrigation system to install, sod to roll out, seeds to start. We will do these things, little by little, when we have the time, and the money. Gardening is supposed to be about process, after all. And I can put off even longer the decision to uproot and move Grandma's rosebushes.