As anyone in Hollywood knows well, sequels often disappoint. To redesign and improve on success without gilding the lily is one of the great challenges in any discipline. So when the J. Paul Getty Museum in Los Angeles acquired the 20th-century sculpture collection of benefactors Fran and Ray Stark, and needed a place to show it, the museum wisely returned to Dennis McGlade, a partner at the Olin Partnership and the original designer of the Getty’s landscaping, for expertise. 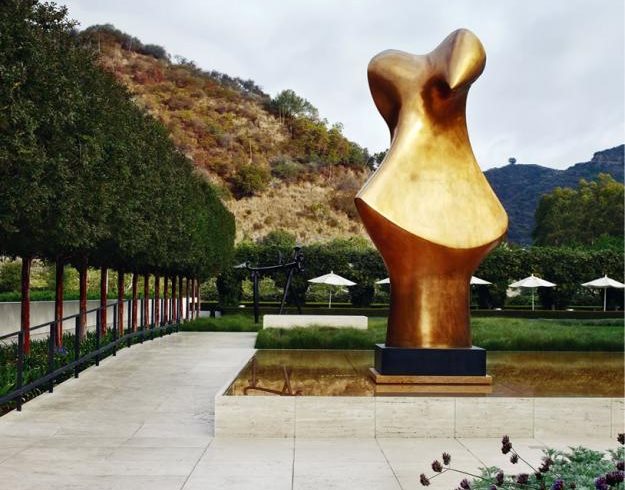 The commission was to enhance the existing landscape in order to create compelling stage sets for the large-scale sculpture works, and the design owes at least a tip of the hat to showbiz.

By way of a collaboration with the Getty’s 18-year veteran horticulturist Michael DeHart, the grounds now sing in harmony with a stunning new cast of characters. A brilliant red de Suvero figure, Gandydancer’s Dream, visually vibrates in a lush green stand of junipers; the glossy rosettes of Aeonium ‘Zwartkop’ echo the color of bronze works by Isamu Noguchi, Henry Moore and Elisabeth Frink. 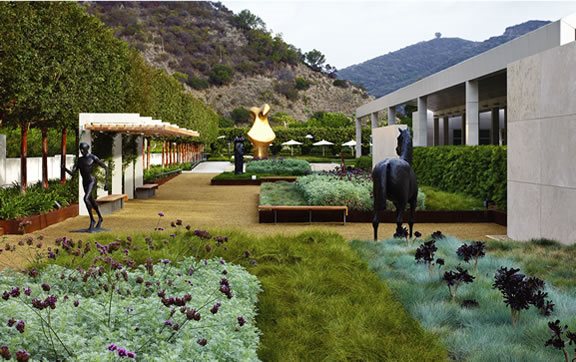 DeHart and colleague Lynne Tjomsland are both veterans of Disney properties, and of Walt Disney’s signature storytelling ethic. “We’ve used plants to draw the eye through, to define rooms by way of color, texture and as a way to emphasize the sculpture,” says Tjomsland. For example, Verbena bonariensis “bloom a soft curtain of mauve” among gray-white artemisia foliage. See-through gray-blue grasses extend and animate the effect. The LEED-EB-certified site includes drip irrigation and replaces much of the mown lawn with granite paths and California natives.

A new T1 tram station was constructed so visitors could go from the street-level parking facility to the top of the hill where the museum is located. The new gardens, which opened formally in 2007, include a green roof and several other terraces, some travertine-stepped, along the hillside property that includes 150 developed acres on 700 acres of precious Los Angeles real estate.

McGlade, a student of the great Glaswegian Ian McHarg and a graduate of the University of Illinois and University of Pennsylvania, has other projects in the works: a new community in the Cayman Islands featuring tropical gardens, a Richard Meier residential complex in Beverly Hills and a progressive community plan on a reclaimed riverfront “brownfield” location in Napa. For the latter, the idea is to repurpose some of the old industrial artifacts, like reclaimed gantry cranes, says McGlade. There might even be an outdoor movie screen. “Can you imagine viewing On the Waterfront there?” asks McGlade with delight.

The new Getty Gardens are closed on Mondays; for more information call 310-440-7300 or see getty.edu/visit.